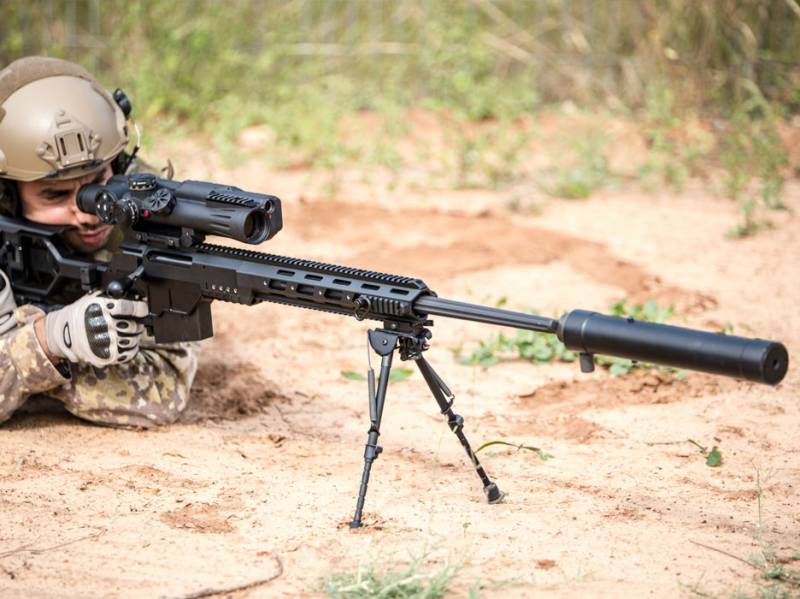 Israeli companies have long entered the international arms and military equipment market. IWI company that specializes in small arms weaponsis no exception. However, the company does not stop at the production of pistols and assault rifles, discovering new niches for itself. One of the tasks of IWI engineers is to squeeze out competitors in the market of high-precision sniper weapons. The IWI DAN .338 sniper rifle under the .338 LAPUA Magnum cartridge (8,6x70 mm) meets these goals. For the first time this model was presented at exhibitions in 2014.

The IWI DAN .338 precision rifle is a niche weapon that was first introduced to the public six years ago. The new sniper rifle was developed by engineers at Israel Weapon Industries (IWI) in direct collaboration with the Israel Defense Forces. The rifle was originally created for military and civilian use and is positioned as a high-precision and reliable weapon that can be used in any, even the most severe climatic conditions.

For IWI, this is the first attempt to create a sniper rifle in such a large caliber. Today, the company continues to specialize primarily in short-arms, carbines and assault rifles. However, after privatization in 2005, the company began to work more actively in the field of diversification of its products. Turning his eyes to high-precision shooting systems, which in the modern world are in great demand. But the Uzi submachine gun, which spread widely around the world, brought real fame to the company at one time. This model became a real hit in the international arms market in the 1960s.

In addition, the most famous examples of Israel Weapon Industries' small arms are the Tavor assault rifle and the Galil assault rifle, which is an Israeli version of the Kalashnikov assault rifle. Today, this model is available even in a sniper version with a cartridge of 7,62x51 mm. Also, the MASADA pistol, which the Israelis created to compete in the world market with numerous clones of the beautiful Austrian Glock 17 pistol, is an interesting novelty of the Israeli arms company.

The IWI DAN .2014 sniper rifle, first introduced in 2014 at the EUROSATORY-338 in Paris, was a new product for an Israeli company, before that there were no bolt rifles in the IWI product line. The sniper rifle got its name in honor of the ancient biblical city of Dan, which was founded about 4,5 thousand years BC. Currently, only ruins remain from the city, but the object itself is a large archaeological and historical value. Working on a new model of small arms, IWI engineers worked closely with the army, as well as the Israeli law enforcement agencies, collecting and analyzing the wishes and comments of ordinary soldiers, special services and police.

According to the manufacturer, the resulting IWI DAN .338 sniper rifle is designed for high-precision shooting and hitting a target with the first shot. With the .338 LAPUA Magnum cartridge (8,6x70 mm), the rifle demonstrates outstanding indicators of firing accuracy at a range of 1200 meters. At the same time, the effective range of weapons may be greater, it all depends on the level of training of a particular shooter. But best of all, a weapon feels itself when firing precisely at a distance of up to 1200 meters. Accuracy declared by the manufacturer - Sub MOA.

Unlike other IWI small arms, among which self-loading samples predominate, the IWI DAN .338 sniper rifle is a traditional bolt lock with a longitudinally-sliding bolt. The bolt locks the barrel of the rifle on three combat stops. This is a fairly typical solution for sniper weapons of this caliber. As noted in an Israeli company, the upper part of the receiver of the Dan sniper rifle is made of special steel with increased anti-corrosion resistance, which should provide the weapon with great safety and durability. Since the rifle was created in close cooperation with conventional army snipers and snipers of special units, IWI hopes that it will be in demand in the international market.

The new Israeli DAN sniper rifle is built on a lightweight one-piece chassis made of high-strength aluminum alloy. The design of the receiver integrates a full-sized Picatinny rail, which allows you to mount any modern optical sights on the weapon, both day and night. At the same time, there are no open sights on the rifle. The rifle is powered from detachable box magazines for 10 rounds. This is currently the only store available for the IWI DAN .338 sniper rifle.

The new Israeli sniper rifle is not lost against other models of sniper weapons on the market today. On the IWI DAN .338 model, a quick change of the barrel is implemented, there is a folding butt (it can be folded to the right and side), which makes the weapon more compact when carrying or transporting, and adjustable bipods and a monopod are included with the rifle. Separately, you can highlight the convenient ergonomic pistol grip manufactured by CAA Tactical. In turn, the folding butt is easily adjustable in length and height, which allows the shooter to adjust the rifle for himself and facilitates the process of aiming and firing at the target. 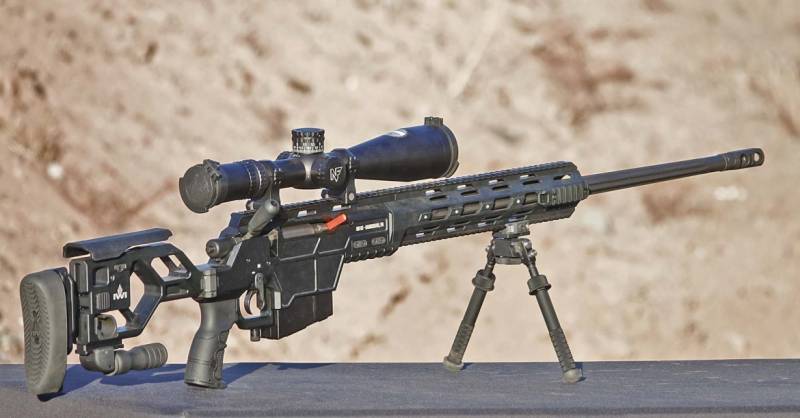 The replaceable barrel of the rifle has a length of 31 inches (785 mm, the barrel length is given along with the muzzle brake). The manufacturer also stated the possibility of easy use with the barrel of a quick-release muffler. The barrel of the Dan rifle is manufactured using the cold forging method, is quick-detachable and freely hung out. The total length of the IWI DAN .338 sniper rifle is 1280 mm (998 mm with the stock folded). Taking into account the dimensions and caliber of the model, the rifle is modest enough for such a weapon to weigh. The IWI website says that the weight of the rifle is 6,9 kg.

Israel Weapon Industries chose the .338 LAPUA Magnum cartridge (8,6x70 mm), which is gaining more and more popularity in the world, for the new high-precision rifle. This is a special sniper ammunition designed to fire long distances. Currently, cartridges of this caliber are actively used not only by the military, but also by shooters-athletes, as well as hunters. The cartridge can be used effectively at a distance of up to 1500 meters. In general, this ammunition is fully justified, as it allows for confident firing at a range exceeding the effective firing range for cartridges 7,62x51 and 7,62x67 mm. At the same time, the rifle systems chambered for .338 LAPUA Magnum are significantly lighter and more mobile than rifles under the .50 BMG cartridge (12,7x99 mm). At the same time, the power and striking ability of a cartridge of 8,6x70 mm is more than enough to effectively combat the enemy’s manpower, including using modern personal protective equipment.

It is still difficult to say how successful the IWI DAN .338 rifle is in the international market. But at least one operator of this sniper weapon is known: this is the famous elite British special forces unit - SAS. British commandos used a rifle in real combat operations in Syria. The rifle featured in a 2016 news story telling about how a British special forces soldier shot and killed one of the ISIS field commanders (a banned terrorist organization in Russia) using IWI DAN .338.