ZRPK "Shell-SM". First in the parade, then in the troops 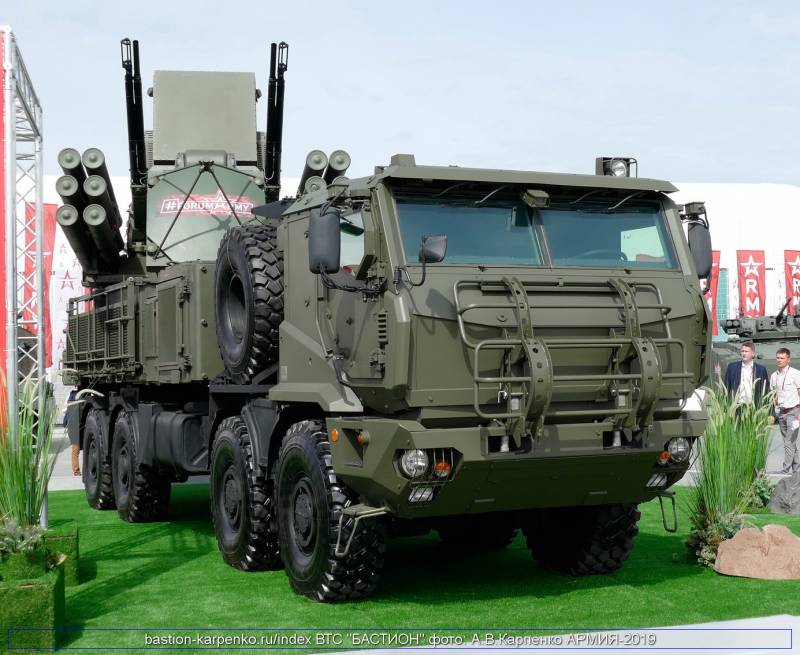 On June 24, a column of modern and promising air defense systems marched along Red Square along with other samples in a solemn march. One of the new products for the first time demonstrated at the Victory Parade this year was the Pantsir-SM anti-aircraft missile and gun system. Previously, this type of equipment was demonstrated only in the conditions of the exhibition, and since the previous show, the configuration of the air defense system has changed significantly.

The basic Pantsir-C1 air defense missile system was put into service at the end of the 2016s, and work on its deep modernization began almost immediately. The result of this a few years later was the appearance of the project “Shell-SM”. The completion of the design was announced back in XNUMX. In the near future, the start of tests was expected, after which the new equipment could go into service. In addition, the public was waiting for it to be shown a promising model.

At that time, the finished Pantsir-SM air defense missile system was shown only in closed displays. An open "premiere" took place at the Army-2019 forum. The complex stood on an open site in a "deployed" position, imitating combat work. Some characteristics were also revealed - mainly determining the superiority over the original “Shell”.

After Army 2019, the tests continued. A new show took place on June 24, 2020 during the parade on Red Square. Two “Armor-SM”, as well as other vehicles of this family passed through the convoy of air defense systems. It is curious that the modernized air defense systems were demonstrated in a new configuration - their weapon composition was different from that shown earlier.

Back in 2016, the main features of the modernization project were announced. As part of the Razor Shell-SM, it was proposed to replace a number of air defense systems components to increase the performance characteristics. As it became known later, almost all the key components of the complex went from being replaced - from the chassis to the anti-aircraft guided missile. 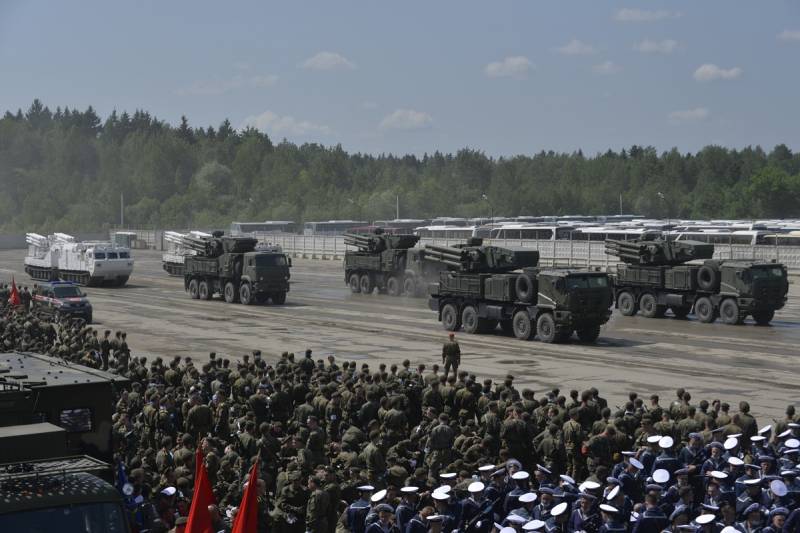 “Armor” of three types in training before the parade. The latest "Shell-SM" lead the system
"Shell-SM" is being built on the new four-axle chassis K-53958 "Tornado" developed by the Kama Automobile Plant. The machine is equipped with a 450 hp diesel engine, automatic transmission and four-wheel drive chassis. Payload - 22 t, top speed - 90 km / h. The anti-aircraft complex uses a chassis with an armored cab. Triple capsule accommodates workplaces of calculation and protects it from rifle bullets and fragments. Measures to protect the crew and units from explosive devices are provided.

Anti-aircraft complex units are mounted on the car frame. In general, their architecture has remained the same, but some have changed contours. In particular, the stern cover has decreased, which is why the base of the rotary weapons module remains open. The module itself is also modified to take into account the use of new devices and nodes. Unlike its predecessor, there are no jacks, and the combat vehicle works directly on wheels.

In the aft part of the weapons module, the antenna of the radar for detecting targets is preserved. In the stowed position, it develops, in combat - it goes upright. "Shell-SM" uses a new radar detection with enhanced performance. The claimed detection range is up to 75 km. It differs from the previous product in shape and layout. So, on the original "Shell-C1" radar 1RS1-1E was used with a two-sided antenna; on the new modification there is only one canvas.

The replacement also went to the 1RS2-E tracking and guidance radar located in the front of the weapon module between the guns. The station with the HEADLIGHT is being used again, but its characteristics are increased. With its help, “Shell-SM” can work on targets at ranges up to 40 km and altitudes up to 15 km. Externally, the new antenna can be distinguished by a rectangular shape.

The optical-electronic station is still used to track targets and control fire. In this case, it is possible to replace components in order to increase the basic characteristics. The range of the review of the new ECO is unknown. 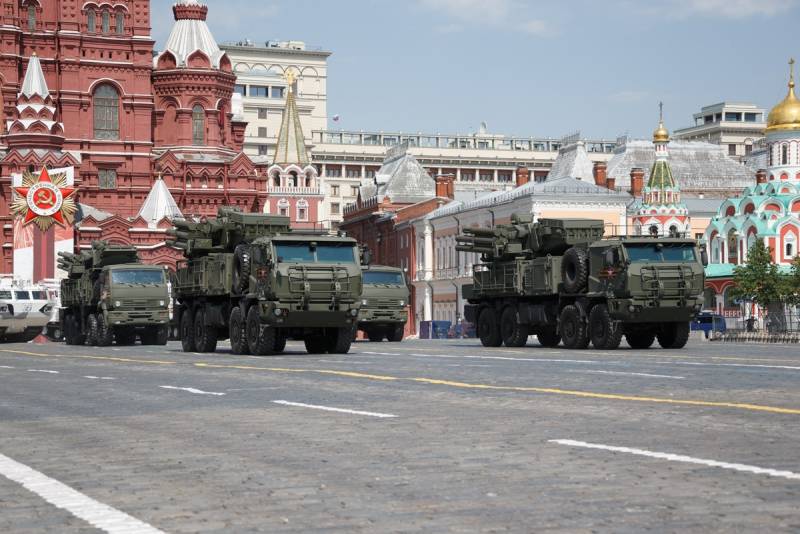 The same cars on Red Square
During the modernization, “Shell-SM” retained a pair of 30-mm 2A38M double-barreled automatic guns. They give a total rate of fire of up to 5 thousand rds / min. and are capable of hitting targets at ranges up to 4 km.

Two launchers for missiles were saved, and in the field of missile weapons there are the most interesting innovations. Apparently, the "Shell-SM" retains compatibility with short-range missiles (up to 20 km) 57E6E. Also developed a new missile with a range of up to 40 km. Other characteristics, design features, and even the index of such a rocket are unknown. As before, the complex can carry up to 12 missiles in the TPK.

At the parade, air defense missiles with incomplete ammunition for "large" missiles were demonstrated - in two installations there were only five of such products. At the upper outer position, two new TPKs were installed with four small-sized missiles in each. Such containers contain a promising compact missile system designed to destroy small targets at ranges up to 20 km. Earlier about this weapons It was reported, but an open show took place only now.

Obviously, ZRPK “Shell-SM” has significant advantages over the basic “Shell-C1”. They are provided with more efficient electronics and new weapons. In addition, due to these improvements, the updated complex will be able to more easily and cheaper solve combat missions characteristic of recent conflicts.

An obvious advantage is the increase in the range of detection and destruction of targets by a "large" missile. “Shell-SM” remains in the class of short-range anti-aircraft systems, but its area of ​​responsibility is significantly increasing. It will be much more difficult to break through an air defense system using such a SAM system. In case of a breakthrough, the complex retains guns that can “shoot through” targets at minimum distances. 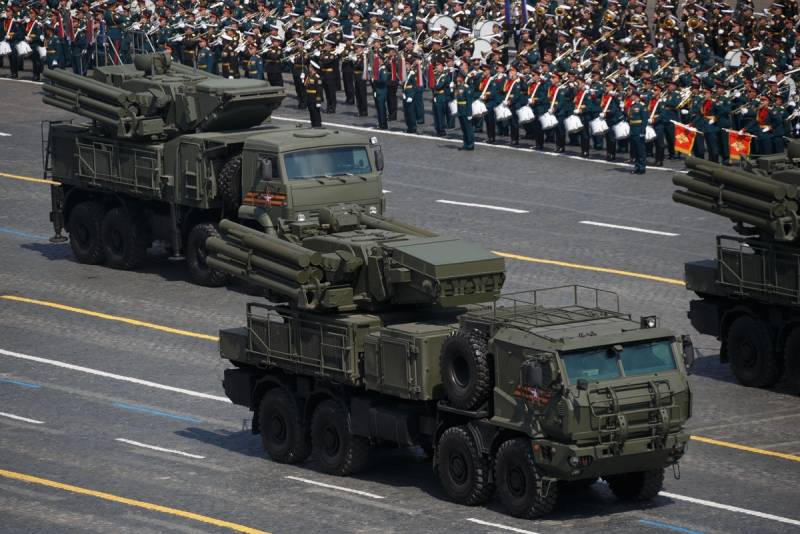 Machine "CM" in the foreground and "C1" in the background. The differences are obvious.
The conflicts of recent years are characterized by the widespread use of unmanned aerial vehicles, including massive. The defeat of such targets by a "large" missile is impractical, and the gun has a limited range. For this reason, a new missile of reduced dimensions and cost has been developed for the Shell-SM. The presence of eight (or more) "small" missiles will allow the complex to repel attacks with greater efficiency and at a reasonable cost. Moreover, the new "small" rocket according to basic flight data is similar to the old "large" 57E6E.

The importance and necessity of such weapons is confirmed by the events of recent years. Terrorists have repeatedly tried to attack Khmeimim using light UAVs with a combat load. The Russian “Shell-C1” intercepted almost all of these targets, despite the complexity of this process. Obviously, the “Shell-SM” will also cope with such tasks, and at a lower cost.

From parade to service

At last year’s exhibition showed only one ZRPK "Shell-SM." Two cars took part in a recent parade. So far we are talking only about experimental or pre-production copies. Work on the project continues, but will be completed in the very near future.

About a year ago, the Ministry of Defense announced that work on the new project would continue until 2021. Other details are not yet available, but it can be assumed that shortly after the completion of the ROC there will be a contract for serial equipment, and then the finished samples will begin to enter the troops and supplement existing ones.

Thus, the Pantsir family of interspecific anti-aircraft anti-aircraft missile and cannon systems continues to develop, and this process gives new positive results. Several land variants of the complex were developed and put into production on different chassis - for export and for special conditions. For fleet created ship option.

At the same time, so far only adaptation of the same units to different carriers was carried out, without more serious changes. Now, a deep modernization is being carried out, aimed at improving the basic characteristics and mastering new functions. In the coming years, the army will receive such equipment and begin to master it, with understandable positive consequences for the defense.