Why the president of Egypt threatens the Libyan PNS: on the situation in Libya 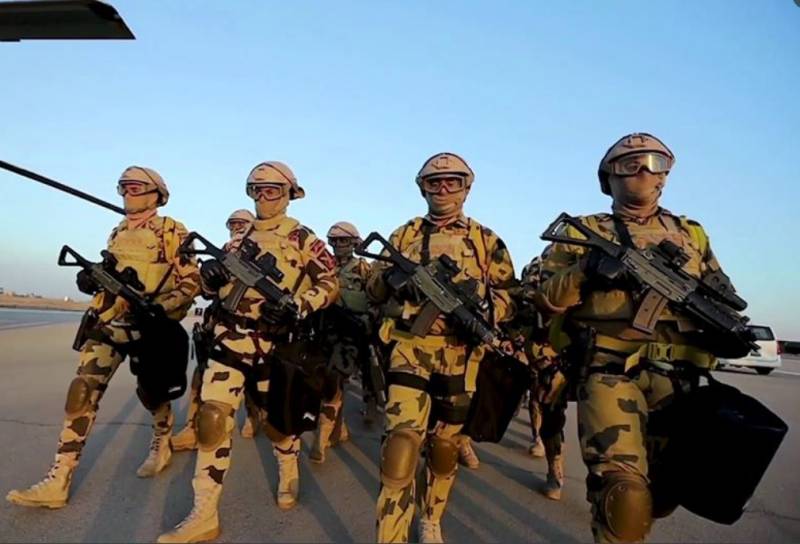 Neighboring Egypt may enter the war in Libya. President Abdel Fatah al-Sisi demanded that the Government of National Accord Faiz Saraj stop the attack on Sirte and Al-Joufra.

Why al-Sisi threatens the Libyan PNS

Recently, the forces of Faiz Saraj have managed to gain a number of decisive victories over the Libyan national army of Khalifa Haftar. These victories, which actually made it possible to clear Tripolitania from the forces of the LNA, were possible thanks to the strong support that the PNS receives from Turkey. Unmanned aerial vehicles, military equipment, "cannon fodder" in the form of fighters from the Syrian Idlib became a significant help to the PNS troops. However, the success of the PNS in May-June 2020. The countries supporting Haftar were seriously alarmed, and first of all, the UAE, Saudi Arabia and Egypt.

The main task of the Arab regional powers is to prevent the strengthening of the influence of Turkey operating in North Africa, including Egypt and Libya, through the support of the Muslim Brotherhood (a banned organization). The Libyan national army of Khalifa Haftar is currently regarded as the only powerful armed force in the country capable of hampering the assertion of power by the Tripolitan government associated with Turkey.

Seeing that it was becoming increasingly difficult for Haftar’s troops to resist the onslaught of Saraj’s army, supported by Turkey, Field Marshal’s patrons took extreme measures: their readiness to intervene in the situation in Libya, as VO has already reported, said Egyptian President Abdel Fatah al-Sisi.

This threat should be taken very carefully, because Egypt has the largest armed forces in the Arab world. Meanwhile, a member of the Presidential Council of Libya, Mohamed Amari Zayed, has already called the statement by the Egyptian president a de facto declaration of war. Given that counting on one's own strengths in the confrontation with Cairo Tripoli is very stupid, after the start of the conflict with Egypt, the situation of Sarajah will completely depend on Turkey.

Turkey vs Egypt: war is undesirable for both countries

For Turkey, confronting the Egyptians in Libya can be all the more difficult because Turkey does not have a direct land border with Libya, but Egypt does. And Cairo can throw into Libya almost all of its numerous land army, which Turkey can never do. There will be hope only for the constant supply of weapons and mercenaries to the forces of the LNA, but then hostilities will unfold between Egyptian and Turkish fleets in the Mediterranean, which the Alliance is unlikely to allow. 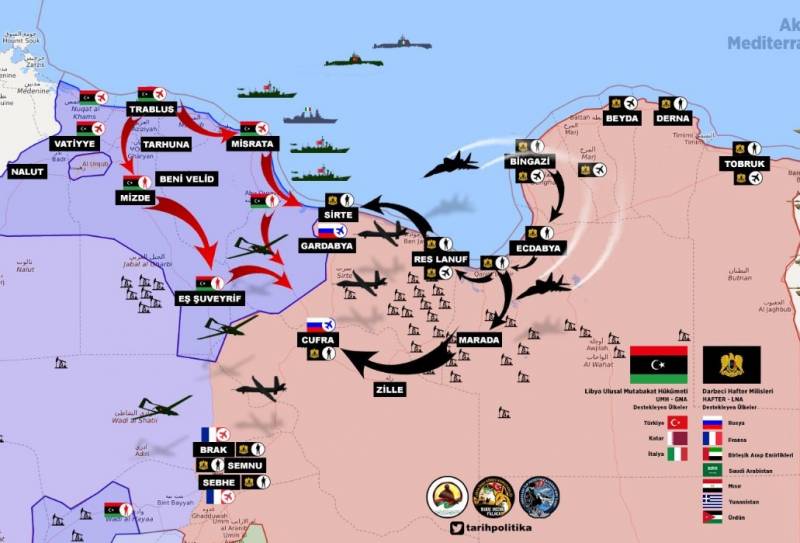 So pro-Turkish forces see the balance of power in Libya

A Russian flag is marked on the map of pro-Turkish formations - places where PMCs from the Russian Federation are allegedly present.

Now Turkey, supporting Sarajah, is insisting on surrendering to the troops of the PNS Sirte and Al-Jufra. But Haftar refuses to surrender Sirte, and Saraj and his supporting Ankara are not ready to go for a truce. Moreover, Tripoli cannot arrange it: the Egyptian president demands not only to retreat from Al-Jufra and Sirte, but also to disarm most of the PNS formations.

It is possible that if the storming of Sirte begins, Egypt will send its troops into Libya. Another question is how decisive Al-Sisi will be in his actions in the neighboring state: the invasion may be limited to creating a buffer zone on the Libyan-Egyptian border, according to the model tested by Turkey in Syrian Idlib. The Egyptians can also proceed through the territories controlled by Haftar’s troops to the border with the zones of control of Saraj and prevent the latter from moving east to Cyrenaica, which, due to its geographical position, Egypt considers to be its sphere of influence.

If we talk about the worst case scenario, then Turkey will have no choice but to enter into a large-scale war in North Africa. After all, the Egyptian army will instantly destroy the troops of Saraj and under the control of opponents of Turkey will be almost the entire territory of Libya. Ankara does not want to allow this, but Turkey is clearly not ready for a war with Egypt. The waryness of France, the FRG, and Italy, which made a demand for an immediate cessation of foreign intervention in the Libyan conflict, is understandable.

France is dissatisfied with Turkish President Recep Erdogan, but given that Turkey is a member of NATO, it is extremely convenient for French President Emmanuel Macron to raise the issue of the need to reformat the entire defense and security system in Europe. After all, the French leader is known for his negative attitude towards NATO and frequent statements about the desirability of creating a separate European military bloc. Turkey will no longer have a place in this military alliance of the European Union.

Ctrl Enter
Noticed a mistake Highlight text and press. Ctrl + Enter
We are
Caravan crossroadsJihadists in Libya retreat, but do not drop weapons
19 comments
Information
Dear reader, to leave comments on the publication, you must to register.