"He who saves one life, saves the whole world." Oscar Schindler and other Jewish saviors 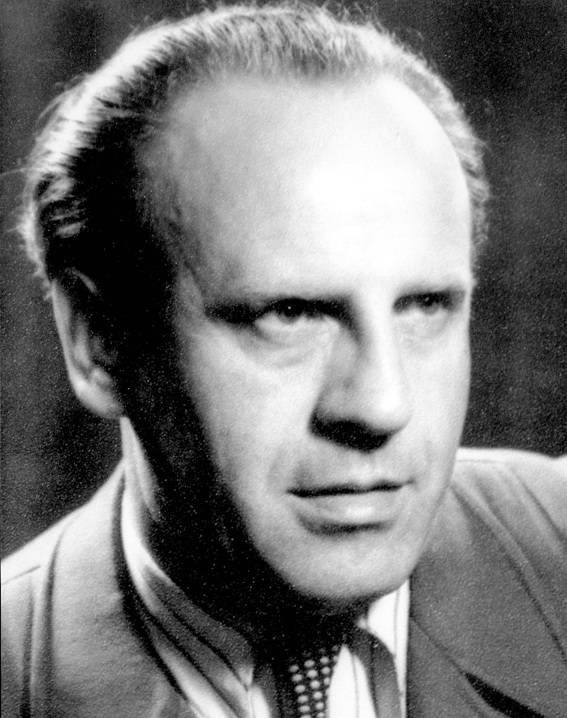 From the very beginning stories about "accomplices to the Jews" should decide what awaited virtuous Germans in the event of exposure.

According to Samson Madievsky in the book “Other Germans”, the criminal law of the Third Reich did not have such a direct concept as “help to Jews”, but of course they could pursue such reasons. To do this, articles were used on “desecration of the race”, on falsification of documents, currency and economic crimes, assistance in illegally crossing the border or facilitating escape from concentration camps. There was also a closed intra-departmental decree of the Imperial Main Security Directorate (RSHA) of October 24, 1941, according to which "German blood persons" who publicly "maintain friendly relations with Jews" were subject to "preventive detention" for educational purposes. In severe cases, they could be sent to a concentration camp for three months. Under the decree, most types of assistance to Jews were considered, which was considered as sabotage of the "measures of the imperial government to exclude Jews from the popular community." 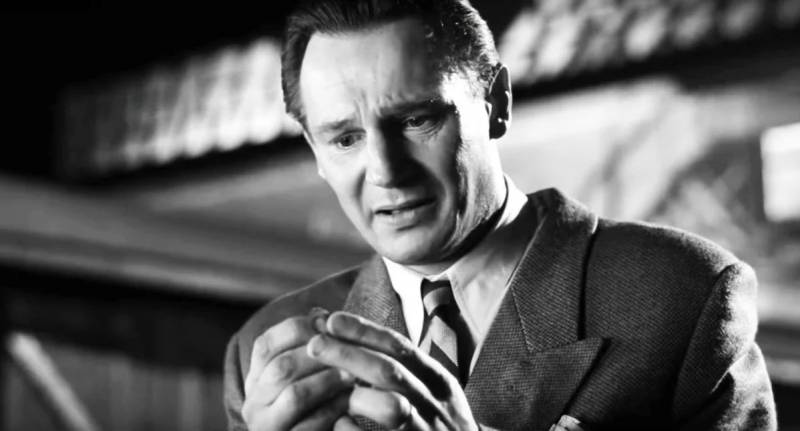 Liam Neeson as Oscar Schindler. Shot from the movie "Schindler's List"
With respect to military personnel displaying inappropriate mercy on Jews, the sanctions were, of course, much tougher. Since April 1942, everyone who helps Jews in some way should have been treated as Jews for all its consequences. Especially tough were the measures in the SS troops, largely responsible for the Holocaust program itself. Himmler, in relation to all those who doubt the methods of the final solution of the Jewish question, expressed quite unequivocally:

Without any condescension to act against those who believe that, based on their interests of the armed forces, should in this case resist. In fact, people of this kind only want to support the Jews and their gesheft.
It is worth recalling that there was no serious punishment (up to the execution) for refusing to destroy Jews in the SS. This is only a post-war invention of executioners who tried to justify their own sadism and mass shootings. At the same time, even among Himmler's chain dogs there were people capable of compassion.

In 1943, the death penalty was sentenced to Unterscharführer SS Alfons Zündler, who had deliberately allowed several hundreds of Jews to flee to an assembly point in Amsterdam. In particular, he took prisoners for a walk and “did not notice” how some of them did not return. Then he simply forged accounting documents. But Unterscharführer escaped execution: he was first sentenced to ten years in prison, and later generally confined to the SS fines. It is believed that the Gestapo simply did not reveal the full extent of Zündler's work. In total, according to researcher Beata Kosmaly, in Hitlerite Germany, a total of 150 court decisions were issued against the “Aryans”, whose cases can be interpreted as “aiding Jews”. What is this talking about? About a small proportion of humane people among the Germans of that time, who were ready to risk freedom and even life for the sake of the Jews? About the weak work of the punitive organs of the Third Reich, incapable of tracking such violations of the regime? Or about the loss of part of the judicial archives and not the most painstaking work of Kosmaly? Be that as it may, only three people were executed for humanity to the "lower race". The victims were Anton Schmid in 1942 - for the removal of more than three hundred Jews from Vilnius, sergeant-major Osald Bosco in 1944 - for facilitating the escape of hundreds of residents of the Krakow ghetto after its liquidation, and locksmith Kurt Fuchs in 1945 - for saving three prisoners of concentration camps during the “march” of death".

As for the salvation of Jews in the occupied countries, the situation here was more tragic. For "complicity with the Jews," the Germans shot the "non-Aryans" without trial. Nevertheless, there were heroes here. For example, the righteous of the world and an active participant in the French resistance, Rene de Norois rescued several hundred Jews from genocide by secretly transporting them to Switzerland and Spain. He managed to survive, after the war he became a prominent ornithologist and died at the age of 100. 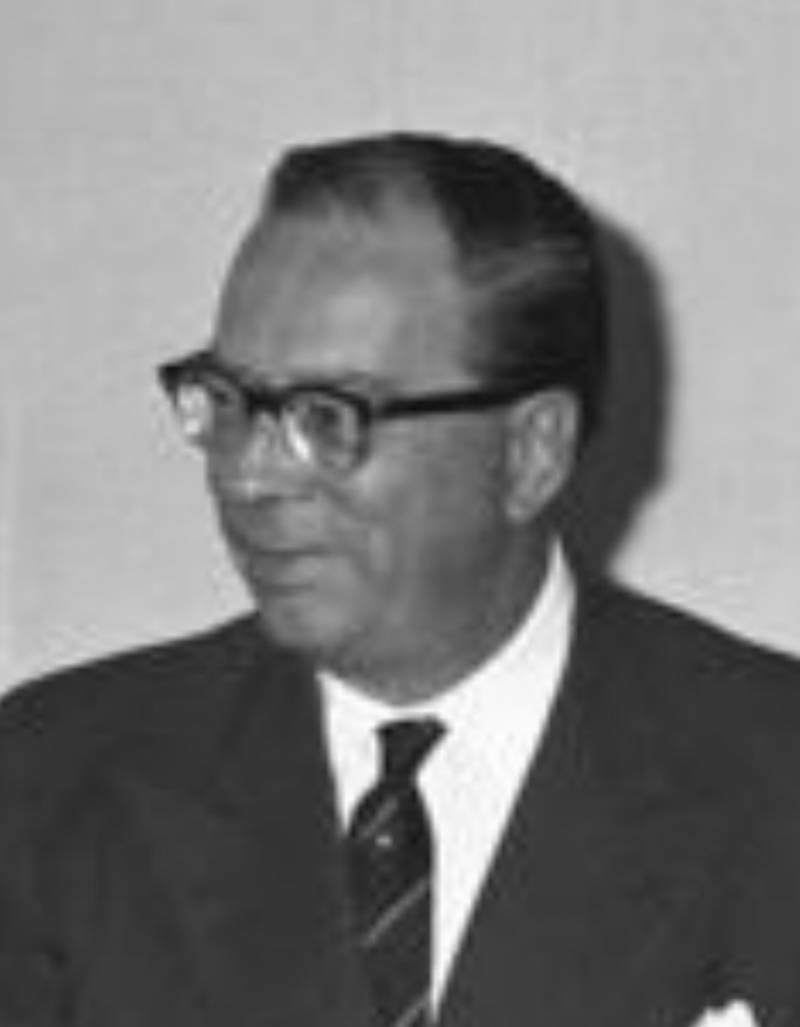 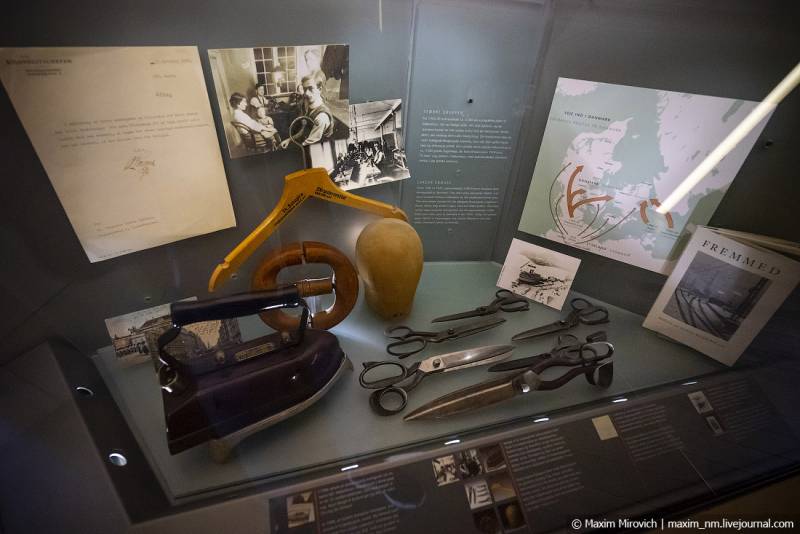 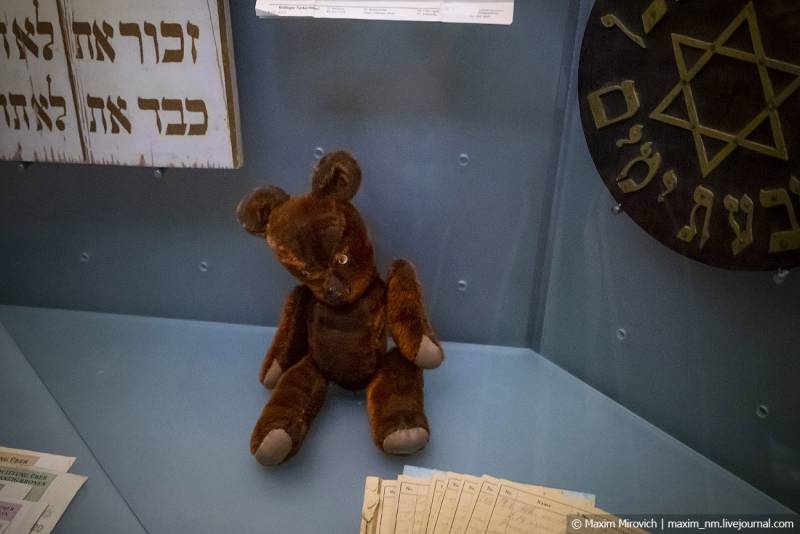 Personal belongings of Danish Jews. Source: maxim-nm.livejournal.com Author: Maxim Mirovich
The story of the confrontation with the Holocaust during the Second World War cannot be complete without mentioning the transport of about 7,2 thousand Danish Jews and several hundred of their relatives of non-Jewish origin to Sweden in September 1943. The Danes can rightfully be proud of this operation forever: they became the only country occupied by the Germans, but resisted the extermination of Jews. The German diplomat Georg Ferdinand Dukwitz was aware of the SS plans for the removal of Jews to concentration camps and ghettos throughout Europe and warned the Danish underground. For almost three weeks at night, fishermen in their boats transported Jews to neighboring neutral Sweden. Not everyone was saved. The Nazis nevertheless arrested 500 Jews and took them to the Theresienstadt ghetto.

Oscar Schindler gained worldwide fame as a savior of the Jews, largely due to the release of the Oscar-winning drama “Schindler's List” in the early 90s. Retelling the detailed story of Oscar Schindler in the framework of this article does not make much sense: everything has long been described in other easily accessible sources. Therefore, let us dwell on the most important milestones of his largely unique life.

The most important achievement of the German entrepreneur was 1098 (according to other sources, 1200) saved the lives of Jews from the Krakow ghetto. In 1939, he organized an enterprise for the production of enameled dishes and ammunition for the Wehrmacht, in which he was helped by extensive contacts with the command. In addition to saving the Jews and humane treatment of them, Schindler did not become famous for his special beneficence. He had a drink with a German officer, dragged himself behind the Poles and squandered large sums of money in gambling. The future “Righteous of the World” took the Jews to the factory only because they were much cheaper than Polish workers. After the liquidation of the Krakow ghetto, in which the "Schindler Jews" lived, the businessman had to establish contacts with the SS executioner, Hauptsturmführer Amon Geth. From the ghetto, Jews were transported to the Plasov concentration camp near Krakow, where Get was the boss. Schindler’s business flourished, he endowed the nearby military leadership with bribes and, as best he could, kept a contingent of Jewish workers in his factory.

Oscar Schindler was arrested three times: for close relations with Jews and Poles, as well as giving bribes. Each time he was rescued from the Gestapo by his wife Emilia, who addressed her husband’s influential friends. The wife, by the way, until her death did not consider her husband a hero. In many interviews, she called him an adventurer and a risky person (she had good reasons for that: in 1957, Schindler left his wife and returned to Germany). In some conversations, after the death of her husband, Emilia described Oscar as an “unscrupulous idiot” and “a born hypocrite”. However, Emilia Schindler notes, in many ways contradicting herself:

In my eyes, he will always remain an extraordinary person, attractive, cheerful and helpful. At times he treated me with a real feeling. However, this was not a faithful husband, and before our marriage, and after he succeeded many women. I can’t forgive him for this. Unable to forget how, having failed in business, he threw me in Buenos Aires with some debts. I lost everything: farm, home, savings. Even today, a thousand dollars of his debt is behind me ...
When the Red Army approached Krakow at the end of 1944, Amon Get received an order to transport all the prisoners of Plashov to Auschwitz. Schindler in various ways achieved the transfer of his Jews to his own factory in Brunlitz in the Sudetenland. When all the moments with the leadership of the camp were discussed, unexpectedly 800 of his workers were sent to certain death in the camps of Gross-Rosen and Auschwitz. Schindler and his secretary had to agree on the transfer of Jews to Brunlitz, cajoling the top of the local SS with bribes and expensive gifts. According to legend, it was here that the businessman spent all his savings. But it was worth it: after all, a train with three hundred living people left Auschwitz. This was the only case in the history of the death camp ...

As mentioned above, after the war, Schindler settled in Argentina, but he did not succeed in this country. He left, he lived in Germany, then in Israel. He failed to organize a business in peacetime, and in recent years the entrepreneur lived poorly, mainly due to gifts and donations from the Jews and their relatives who were saved by him. In Israel, in 1963, a tree appeared in the Alley of the Righteous in honor of Oscar Schindler, and in 1974 he was buried on Mount Zion in Jerusalem. June 24, 1993 Oscar and Emily Schindler were awarded the honorary title "Righteous Among the Nations of the World". 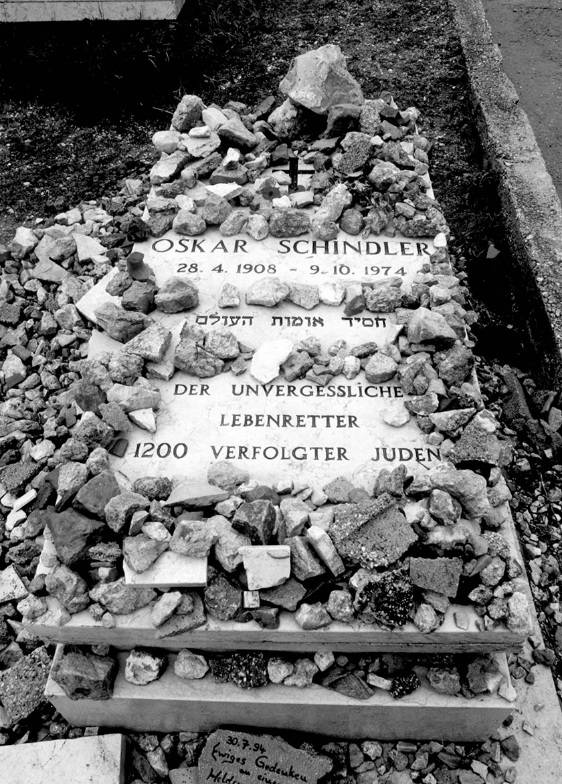 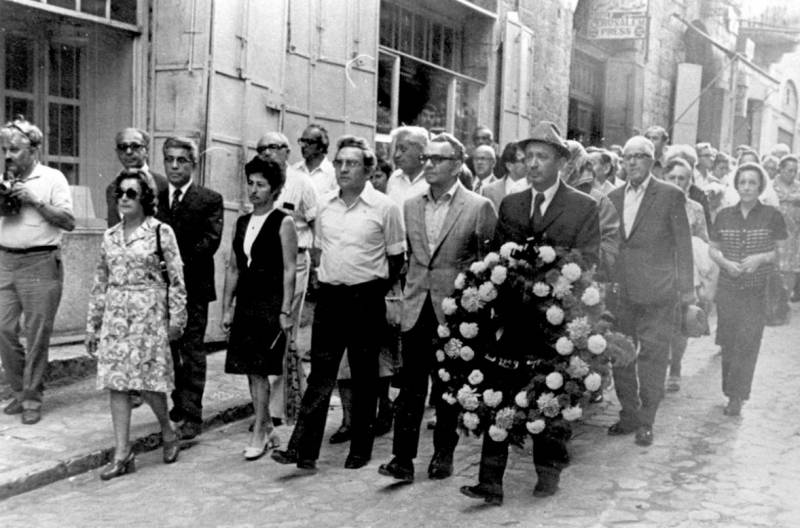 Schindler’s funeral and his grave in Jerusalem. Source: yadvashem.org
Steven Spielberg made his film about the German Savior of the Jews based on the book by Thomas Kenilli “Schindler’s Ark”. The book, and even more so the film, very freely treats Schindler’s real life, embellishing reality and the silent part of his biography. For example, the fact of his recruitment by German intelligence in 1935. But this does not matter, because, as they say in the Talmud, "who saves one life, saves the whole world."