Leader can only be changed to a leader 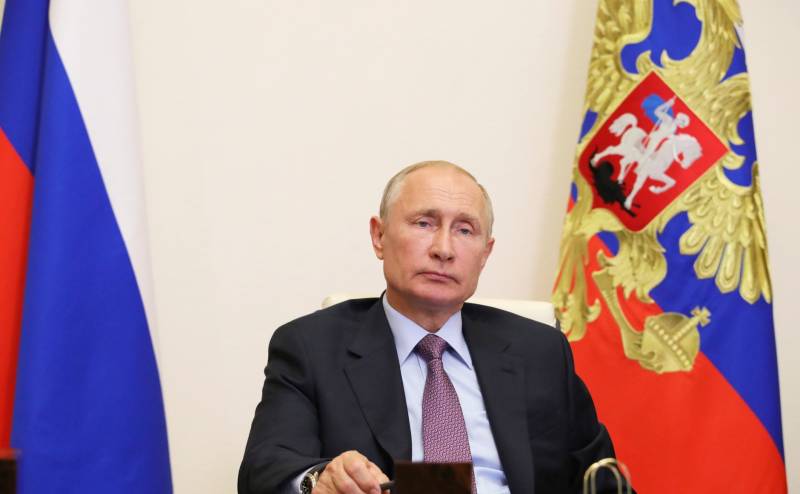 Military parades took place in almost thirty cities of Russia. No matter how much our lovers ask "historical the truth ”about why we are holding a parade on June 24, the educational level of our youth, no matter how we scolded him, nevertheless logically allowed us to relate two dates: June 24, 2020 and June 24, 1945.


Of course, quarantine also played a role. The people were simply tired of being afraid of the coronavirus, tired of the “farm life”. Russians in this regard are much more “public” than other nations. We always live together. We work together, celebrate joyful or tragic events together, fight together. Yesterday we saw this in parks, on embankments, on city streets.

“Putin has brought the country to a pen and must leave”

I belong to the generation of those who take places in advance, even before the start of the action. Young readers will probably remember their surprise that the best places they aspired to 5 minutes before the start always turn out to be occupied by someone before. Experience is the son of difficult mistakes ... Naturally, in anticipation of a salute, we talked about the upcoming vote. More precisely, the interlocutors said, I just listened and inserted replica questions.

How short human memory is ... “He brought the country to a pen, ruined industry, medicine, schools, and transport. The plants are closed, the coronavirus is again "... I think such conversations are not for you news. Only one thing is striking: I spoke with people of "40 and even 50 plus." Those who need to remember!

No, I understand that human memory is designed so that after some time any event is “varnished” by our brain. To stay mentally healthy, the brain removes from itself all the bad things that happened in the past. The brain tries to remove pain, suffering, shame for their own actions. Rummage in your brain now and remember the 90s. Some snippets of events, some vague silhouettes, some shadows. But in general, "then they lived normally, hard, but normal" ...

Well, I’m materializing today some “forgotten” events from our, mine and yours, life. The one we really lived. The one about which our young children usually say: "Oh well, that can't be." Let me remind you of the country of Chinese bilateral “down jackets” and “Bush's legs”, the main food for the majority.

Remember, comrade officers, a hungry, impoverished, decently drinking Russian army in the 90s? Remember commodity stations where not only lieutenants worked as loaders, but also majors and lieutenant colonels? Remember life after life? When to receive monetary allowance was happiness, not the norm. Doesn’t resemble anything? Look at the APU today. This is us, only in the 90s.

Remember how you looked for those who could at least somehow fight in the first Chechen? Maybe this is only I remember the total drunkenness, drug addiction and poverty in a civil war? Maybe only I remember how the “Afghan brothers in arms»In the Kotlyakovsky cemetery in the fight for big money, which allowed to earn power then?

And the movie, which was probably the most popular then, remember? The "brigade"? Remember the boys who wanted to get into these same "brigades"? Remember the lists on several pages, which listed only the names of the gang brigades? When such brigades totaled hundreds of “active bayonets”, and could mobilize thousands in a short time?

Honestly, I also sometimes say to myself: "Oh well ... Is this really true?" And then I see in the cemetery an “alley of heroes of the 90s”, through which it is impossible not to pass. She is right at the entrance. Marble and granite youth from the 90s. Those who "lived well, but not for long." There is no more or less large city in Russia where there would not be such “malls” ...

Is this exactly Putin brought to this country? Surely he sold the plants for a penny? Did he ruin everything else? Is it because of him that I “fell in love” with chicken legs and, in general, hens for life?

Today, sitting on the couch in front of a huge “plasma” or taxiing out of a yard full of neighbors' cars in his Toyota or BMW, which soon has a warranty that needs to be replaced urgently, you really think about this issue ... Or a neighbor rocker boy with with his growling "iron horse" pushes to such thoughts ...

I want happiness right today or tomorrow in the morning!

We forgot our bestial state at the end of the last century. It’s probably right that they forgot. After all, what are we living for? So that the lives of our children are better than ours. In order for them not to have their “Chinese down-padded coats”, their “Bush legs”, their “brigades”. In order for there to be a state for the people, not a people for the state.

I really want this! Probably we all want this. Right today, at least tomorrow morning. We do not want “later” or “soon”. And I understand those who today dream of changing the steed to a young, promising stallion who will carry us into the bright future with great speed ... Wasn't this what Ukrainians dreamed about a year ago? Sorry for the association.

Notice how the tone of the statements of our liberals has changed? Now they are talking about a change of leader. They do not change horses at the crossing, no one will argue here. But what if this crossing is akin to the Crimean bridge? Endlessly long. At half life, the length of the ferry. The shore is not far there, it seems, but to reach it for a long time. The young horse runs faster.

I don’t think much about horses. Spectator, no more. But even I know that young horses always have a lot of problems. Such a horse accelerates at the start, like a rocket. He needs to beat the competition. You have to show yourself. But soon there will be a calming. The competitors are no longer annoying, he already bypassed them at the start, the tension of the start decreases, and the horse decides that she has nowhere to rush. True, if the rider is experienced, then he will be able to "dissuade" her. But most of these horses are always second.

Another thing is those horses that already know the taste of victory. These are dear horses! World class! I remember the number that once stunned me. 200 million dollars per horse! This is exactly the amount paid for the horse named Frankel. Speed ​​is 70 km per hour. 14 victories in the most top races and ... well-deserved rest. Pension is horse.

Today we have just such a leader. Already accustomed to victories and not allowing thoughts of second place. Scored his "14 victories." Become a world leader. The only drawback is age. Another 10-20 years, and there will be no strength left at all. And, as it seems to me, this is understandable even to the leader himself.

Leader must be changed only to a leader

I wrote many times that Putin is most likely not going to a new term. Even despite his own statement made in a recent film. It won’t do just because it understands that there may not be enough strength. Alas, no one has yet left old age.

Have you ever wondered why accusations of having huge capital abroad, huge palaces, islands and other real estate do not stick to Putin? How many “honest investigations” were about this! How many bloggers and opposition politicians have spoken about these bills and palaces! And nothing. The overwhelming majority of people do not believe in these stories.

Someone doubts that even after leaving power, Putin will not suffer from poverty. He will live out his life with dignity, as an outstanding president, a world-class politician. And to earn decent money for politicians of his caliber is not a problem at all. Any lecture or performance - and he is a millionaire ...

And what remains after a person leaves? After life? Not wealth or palaces remain. Things remain! One poem by Pushkin crosses out all his shortcomings in life. One view of St. Petersburg crosses out all the nasty things, all the folk blood that Peter the Great shed. The victory over fascism, industrialization, the country's withdrawal into world leaders crosses out the Gulag and the repressions of Stalin.

And vice versa, the collapse of the USSR cancels Gorbachev’s whole life. All his achievements and victories. The surrender of the country to the Americans crosses Yeltsin’s past. The very scales on which history puts your actions. And the descendants will decide your fate, find your place in this very story.

A leader must be changed only to a leader. On a leader who would not be afraid to take the helm after a president of such a scale as Putin. Just because any new leader will be deliberately worse. Thicker, thinner, higher, lower, not so persistent or too uncompromising. Alas, this is a fact. Exactly the same reason why we “forgot” the 90s.

The country will soon be able to see a new leader

The fact that people will vote for amendments to the Constitution today is understandable. For or against, no matter. In my opinion, the “for” option will win. Amendments will be accepted. Therefore, write about it is not worth it. But what will happen after a while, what we will see, perhaps soon, is worth talking about.

We, as if on purpose, are silent about one moment that simply cannot be seen. Putin is looking for a successor! Look at the governors of the Russian regions. The very nestlings of Putin’s nest, which gradually replaced the veterans. And who gained tremendous power during the pandemic.

Is that why in different regions the struggle with coronavirus is conducted in different ways. Is it because the president "let go of the reins" (which, in fact, is not characteristic of Putin)? When else can you see the potential of a leader, if not in the extreme conditions of a pandemic? But, in addition to fighting the virus, governors continue their routine work. Revive the economy of the regions, restore cities and villages, create jobs and more.

Now let's look at a future candidate whom Putin would ideally replace. Who does the people in this place want to see? So, the age is 40-50 years old, not a talker-politician, but a practitioner who has experience in government of a region or industry not less than a minister, able to take responsibility for the decisions made and to resist attempts to return the country to the West.

I think it’s clear that the appointment of relatively young governors is the search for a successor. Insurance for the case of a sudden departure of the current management for some reason. Another "cunning plan of Putin." It is in the spirit of the times. The hope of the “right choice of the people” and “cooks” from the Internet is nothing more than stupidity. Again, back to Ukraine. In the first round there really was at least some choice. And in the second?

So, I think, the time is not far off when we will see the very young and promising one who will be offered to us as a candidate for the next president of Russia. The opposition’s hopes for the appearance in their ranks of at least someone who can claim leadership in the country are so illusive that it’s not worth talking about them. We have already seen Sobchak - the presidential candidate ...

The caravan will go further. And the dogs will bark further. In this world, nothing changes ... Only people come and go ...

Ctrl Enter
Noticed oshЫbku Highlight text and press. Ctrl + Enter
We are
A great interview with Sergey Lavrov: about Ukraine, Obama and IranWhat you didn't want to know about England
Military Reviewin Yandex News
Military Reviewin Google News
516 comments
Information
Dear reader, to leave comments on the publication, you must sign in.