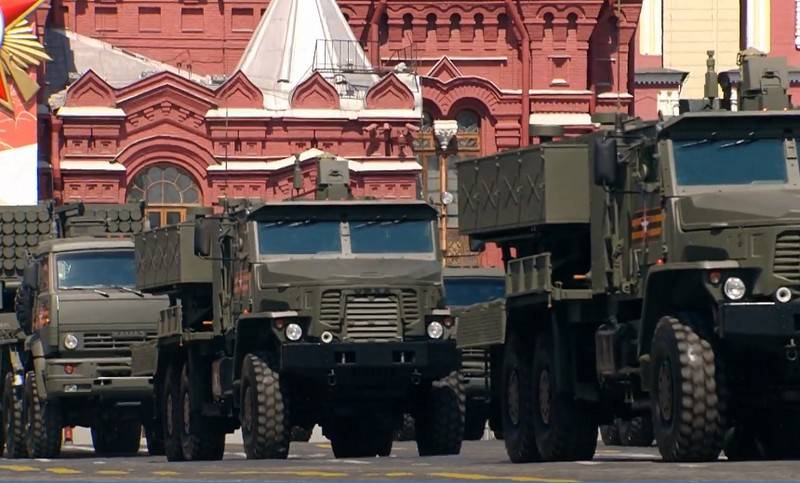 At the Victory Day parade in Moscow today, along with military equipment already in service and shown at previous parades, the equipment that was demonstrated for the first time also participated.


According to the Rostec press service, for the first time, new combat vehicles developed by the UVZ, Techmash and High-Precision Complexes, which are part of the state corporation, took part in the parade.

Among the innovations that took place on Red Square, the latest TOS-2 heavy flamethrowers ("Tosochka") stood out, the image of which had not been previously published, except for the sketchy ones, the machine of the engineering system for remote mining "Agriculture". For the first time participated in the parade Tanks T-90M "Breakthrough" and T-80BVM, combat vehicle 2S38 "Derivation-Air Defense", the latest ZRPK "Shell-SM". In addition, the Arctic “Shell-SA” and the multiple launch rocket system (MLRS) “Tornado-S” were shown.

For the first time at the parade, a remotely controlled combat module "Hunter" was mounted on the Typhoon-K armored vehicle.

In total, in the Moscow parade, 234 units of modern and historical military equipment.
Ctrl Enter
Noticed oshЫbku Highlight text and press. Ctrl + Enter
We are
The latest TOS-2 flamethrower system will be shown at the Victory Parade in MoscowDeliveries of the new Tosochka TOS are planned from 2018 of the year
Military Reviewin Yandex News
Military Reviewin Google News
71 comment
Information
Dear reader, to leave comments on the publication, you must to register.