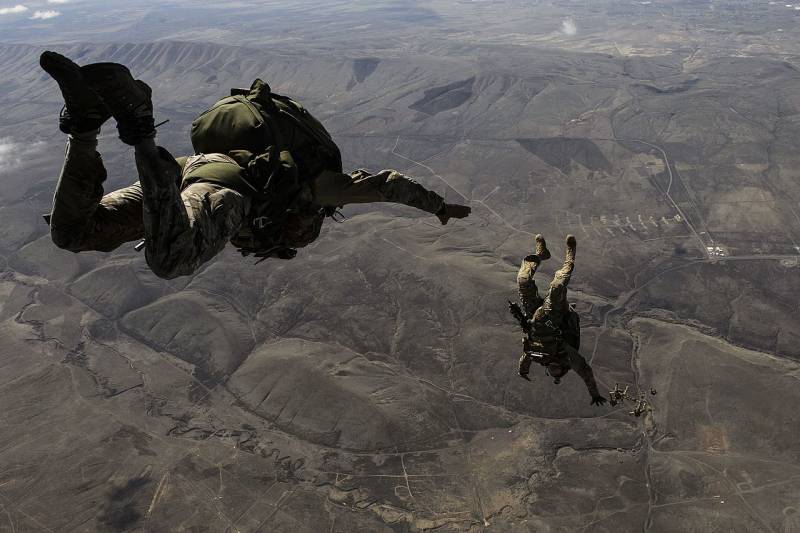 The US Army Special Operations Command (USASOC) is the highest command authority for all special forces that are part of the US Army. This command body carries out immediate operational planning and directs the conduct of military operations of army special forces. It is the troops of special units of the Ground Forces of the American Army that are by far the most numerous. The approximate number of special forces subordinate to the US Army Special Operations Command is estimated at 33, of which 800 are civilian specialists.

The 75th Rangers Regiment is a unique unit of special forces consisting of specially trained and well-trained soldiers. In fact, it is a special parachute reconnaissance regiment of the US Army. This is a specialized light infantry with a limited composition of heavy weapons and armored vehicles. The soldiers of the regiment are prepared for landing by all available means: parachuting, helicopter, sea. The motto of the regiment: "Rangers go ahead."

It is believed that the first units of the mobile field reconnaissance of the Ground Forces for operations behind enemy lines ("rangers") appeared on the territory of the USA at the end of the 1969th century. At the same time, a whole army of reconnaissance corps took part in the war for US independence a century later. At the same time, the formation of units and subunits for conducting deep reconnaissance in the American army occurred only during the Second World War. Since then, the Rangers have been involved in all the major wars and local conflicts waged by the United States around the world. For example, during the Vietnam War in 75, the name “Rangers” passed to the 13th paratrooper regiment, which, in 75 separate companies, participated in raids on enemy rear lines and was involved in reconnaissance. Finally, all the individual units of the "rangers" were brought together as part of the 1986th Parachute Regiment in February XNUMX. 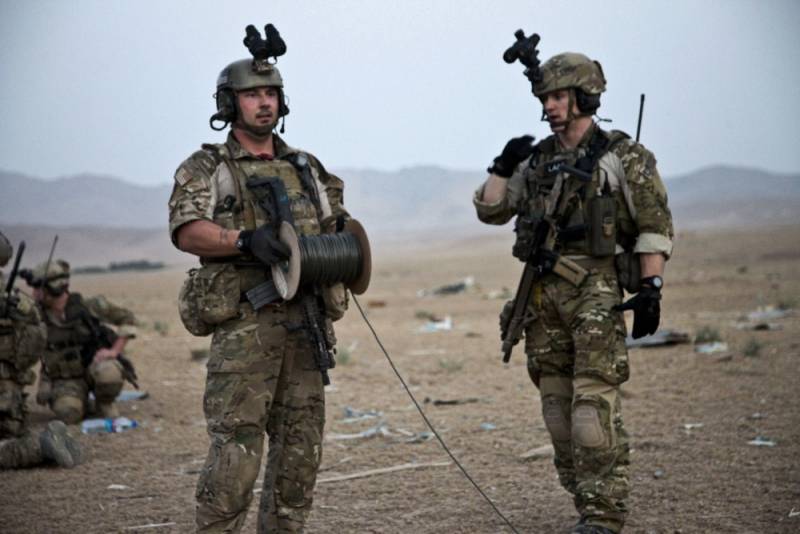 Afghanistan Rangers Division 2012
Today, the Rangers are the most trained light infantry of the US Army. In addition to reconnaissance, sabotage, and sabotage behind enemy lines and carrying out reconnaissance in the interests of the advancing units of the Ground Forces, regiment units can be used for direct operations: capturing and holding airfields, capturing or destroying strategically important enemy targets, and capturing or eliminating senior officials from numbers of the military-political leadership of the enemy. Each ranger goes through a long training process, which includes individual training (physical and tactical) and the development of team actions as part of a battalion in any conditions, situation and climate: from urban development to the snow of the Arctic or impassable jungle. Additionally, each unit of the 75th regiment has a team dedicated to cleaning buildings, which is specially prepared to solve such problems.

US Army Special Forces are widely known as the "green berets." It is a selection of well-trained units of the US Army. History "Green berets" originates in 1952. The first fighters of the special forces were members of the Office of Strategic Services (OSS), created back in the years of World War II. In many ways, the organization and training of fighters in those years was based on the experience of the English Special Military Service (SAS). A serious increase in the number of "berets" occurred already in 1961 against the backdrop of an aggravation of the situation around Cuba. Then President John Fitzgerald Kennedy increased the number of these units from 1 thousand to 2,5 thousand people with the formation of the concept of preparing special forces for guerrilla and anti-partisan warfare.

In many ways, it was Kennedy who put a lot of effort into the formation of modern American special forces. It is no coincidence that the US special forces training center bears his name today. It was this American president who contributed to the Green Berets becoming the elite of the army in every sense. In addition to the high level of physical and combat training, much attention was paid to the training of fighters in reconnaissance, the study of tactics, foreign languages ​​and cultural characteristics of the countries in which the special forces were trained. It is no coincidence that it was in the units of the "green berets" that the first units of the psychological war appeared in the US Army, who understood and used traditions and cultural-psychological features of various peoples of the world to achieve their goals.

Currently, the US Army has 5 active groups of “green berets” (1st, 3rd, 5th, 7th, 10th), two more groups (19th and 20th) are deployed as part of the troops of the National Guard. Organizational groups are light parachute landing regiments of a four-battalion composition. The motto of the "green berets": "Liberation of the oppressed." Special forces groups are prepared for operations in various regions of the planet. At the same time, some of them are deployed outside the United States, for example, one of the battalions of the 1st Parachute Airborne Regiment of the U.S. Army is stationed on the island of Okinawa, and one of the battalions of the 10th Parachute Regiment is located in Germany in the city of Boeblingen. Battalions from the 3rd, 5th and 7th regiments were regularly recruited to conduct operations in Afghanistan and Iraq. 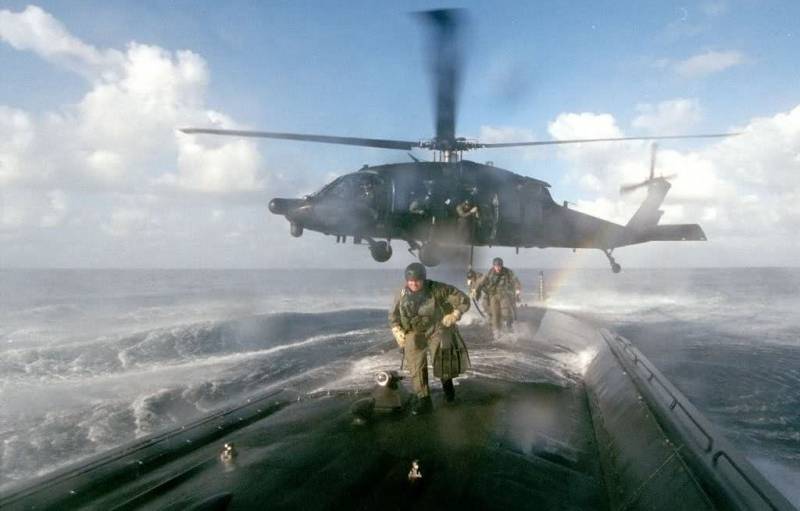 The landing of the fighters of the 7th group of "green berets" aboard a submarine
Green Berets are being prepared for participation in peacetime operations, during local conflicts of varying degrees of intensity, and during a full-scale war. The soldiers of these special forces can take a direct part in the hostilities, participate in the fight against terrorism and drug trafficking, conduct special reconnaissance, clear the ground and participate in humanitarian operations. At the same time, the peculiarity of the units is the preparation for an unconventional war (supporting a foreign rebel movement or a resistance movement in the occupied territories), and the fight against rebel movements and partisans.

Green Berets have left a big mark in popular culture. The first film of the same name was released during the Vietnam War, the main role in the film was played by the star of American Westerns - John Wayne. But the most famous “green beret” from the world of cinema can be called John Rambo performed by Sylvester Stallone, whose hero did not find himself in the world without war and battles. Also the “green beret” was Colonel Kurtz, who had to be found in the jungle of Cambodia to Captain Willard in the cult film Francis Ford Coppola's “Apocalypse Today”.

The first operational unit of special forces "Delta" is sometimes also called the first operational unit or the first separate operational special forces regiment. A more common name, especially penetrated into popular culture, is an abbreviated version: the Delta squad. It is under this name that the unit often flashes in Hollywood films, one of which was the action movie "Delta Squad" with the modern meme hero Chuck Norris in the title role. Another famous film, in which there are fighters of the special forces "Delta", is the picture "The fall of the black hawk."

The plot of the painting "Delta Squad" is based on the release of hostages by members of the special forces. In reality, “Delta”, of course, can be involved in a similar task, but in fact in the United States the FBI special forces and the American police usually do this. The tasks of special forces themselves are not limited to saving civilians. The main profile of the Delta squad is the fight against terrorism, the counter-guerrilla war, the fight against rebellion, and secret operations around the world. The unit can also participate in hostilities by organizing direct operations: raids, ambushes, sabotage. Also, unit fighters can be involved in actions against highly valued goals: people or resources needed by the enemy command to successfully solve their problems. 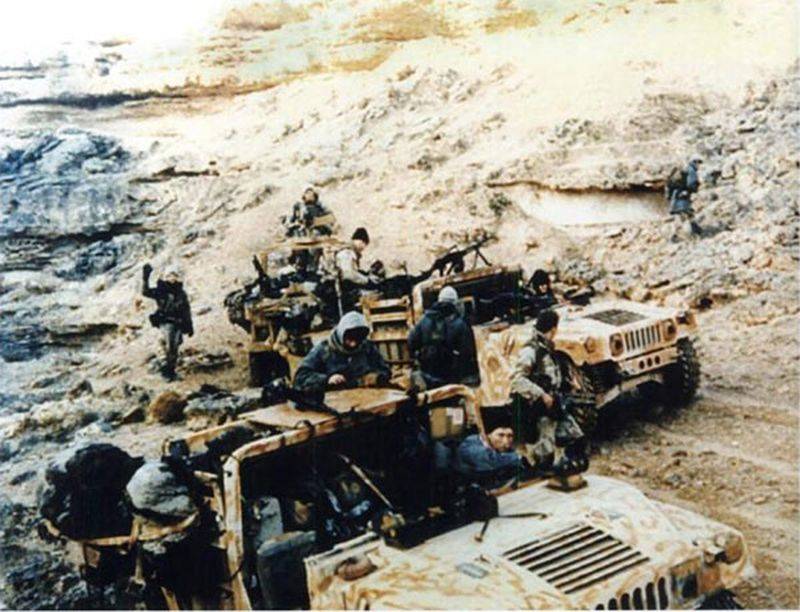 Fighter of the Delta squad behind the front line in Iraq in 1991
The Delta division is elite and is usually staffed with military personnel with experience in other special units of the Ground Forces, as well as the 75th Rangers Regiment. The total number of units is estimated by specialists at 800-1000 people, while the exact composition of the unit is not disclosed. It is estimated that approximately 300 of them are trained to conduct combat operations and rescue hostages, while the rest are highly qualified support staff, the best of the best in their fields.

In addition to these units, the US Army Special Forces also includes the 160th Separate Army Regiment aviation special forces and a number of parts support. The 160th regiment also has a battalion of special forces air gunners and a training battalion of aircraft gunners. In addition, a separate 528th Special Forces Logistics Support Brigade is allocated, as well as a special military center and the John F. Kennedy School of the US Army. This center is engaged in the training and education of personnel for special forces.

As part of the US Army special forces, three interesting units can be distinguished. The first of these is the 95th Civil Affairs Brigade (airborne). The soldiers of this brigade are able to speak at least one of the 20 foreign languages. Their main task is to assist the US military command and work with civilian authorities and the population in areas of operations in peacetime, during emergency situations, and also in war conditions. Their important task is to work with the civilian population and ensure its loyalty, including by identifying and subsequently solving problems critical for the civilian population (during emergencies or military operations). 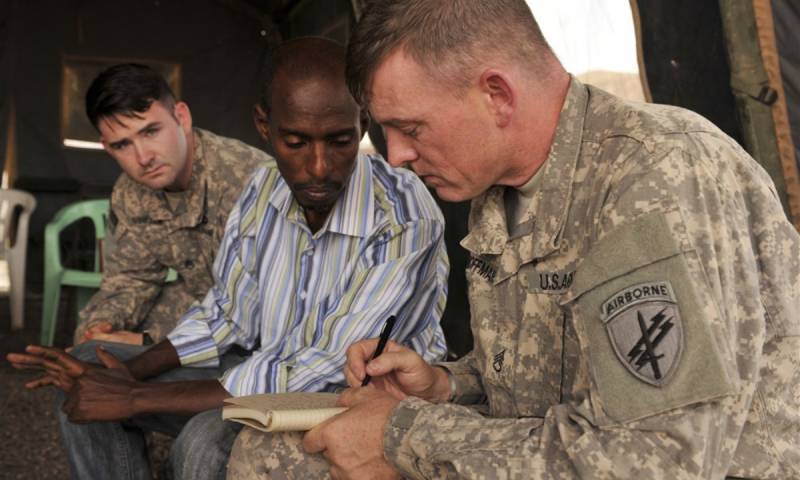 Soldiers of the 95th Civil Affairs Brigade
The United States Army Special Forces also includes the 4th and 8th groups of psychological operations, each consisting of several battalions. The 4th group was formed in 1967 at the height of the Vietnam War.

Both units of psychological operations provide information support for ongoing military operations, providing support to civilian and military authorities. The division produces and distributes information materials aimed at delivering information to a foreign audience in a favorable light for the United States. In addition to various types of propaganda, the unit is engaged in providing combat units with specialists with knowledge of foreign languages, customs and customs of the local population, as well as the preparation of analytical, reference and informational materials of an intelligence nature.