Air "Blitzkrieg": rotorcraft of the future in the service of the US Army 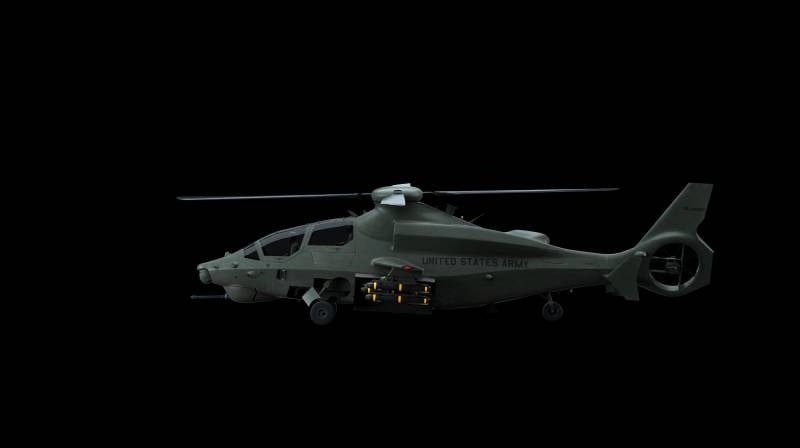 June was marked by another achievement of the Sikorsky / Boeing duo in the development of a new high-speed helicopter SB-1 Defiant. It would seem that just recently (the car completed its very first flight on March 21, 2019), it clumsily hovered above the ground, showing with all its appearance the experimental nature of the development. However, on the ninth of June this year, on the territory of the Sikorsky Flight Test Center in West Palm Beach, a car accelerated up to a speed of 205 knots (380 kilometers per hour), setting an absolute speed record for yourself. This is only the beginning of a long and hard road and new achievements. 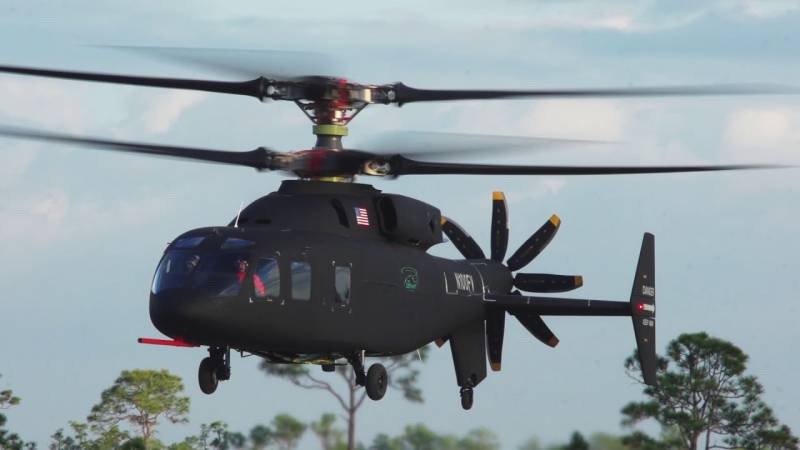 Recall that the SB-1 Defiant is part of the FLRAA (Future Long-Range Assault Aircraft) program, which, in turn, is generated by the Future Vertical Lift (FVL) concept. The latter is aimed at finding a replacement for almost all US army helicopters.

Its components are as follows:

The SB-1 Defiant helicopter is one of the main contenders for victory in the Future Vertical Lift. And one of two possible, if we talk about FLRAA. According to the requirement of the US Army, the machine must transport twelve fully equipped paratroopers with a cruising speed of at least 425 kilometers per hour for a range of at least 420 kilometers.

Defiant is close to meeting the requirements. At the same time, the developers themselves plan that the car will be able to fly at a speed of more than 460 kilometers per hour. The demonstrator is equipped with two Honeywell T55 engines and has a well-recognized appearance. Like the distant ancestor of the helicopter represented by Sikorsky X2, the new device has a coaxial rotor and a pushing screw: by the way, Sikorsky used the same scheme for the light helicopter S-97 Raider.


And although the relationship with konvertoplanov among Americans is traditionally not the best (lovers aviation well aware of the technical difficulties and the gigantic price of the V-22 Osprey), Bell does not frighten technical challenges. Recall that its promising tiltrotor Valor made its first flight on December 18, 2017, that is, two years earlier than its competitor in the person of SB-1 Defiant took to the sky. 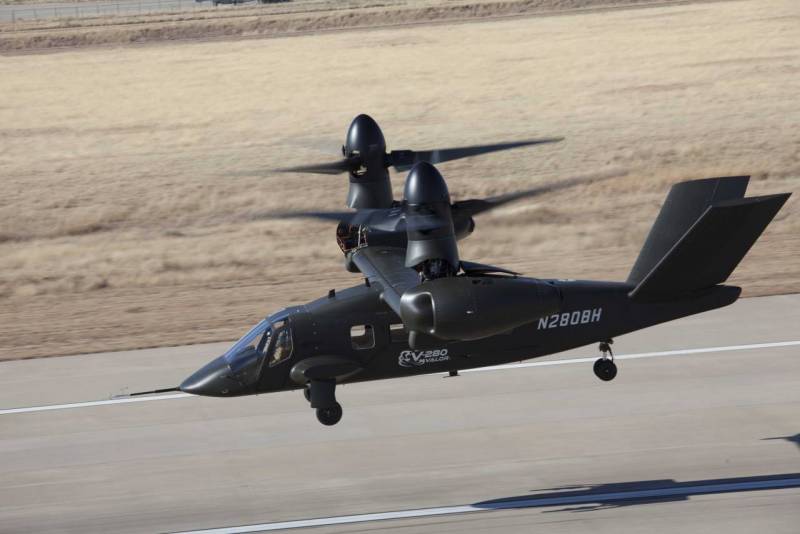 Not surprisingly, behind the back of the aircraft is already a series of achievements. So, on May 16, 2018, the prototype flew in an airplane mode: during testing, the device reached a speed of 350 kilometers per hour. And in January 2019, the tiltrotor accelerated to a cruising speed of 518 kilometers per hour. In December 2019, Valor flew in a completely autonomous mode: the pilots were in the cockpit, but did not intervene in control. It is assumed that in the future such opportunities will minimize the risk to the crew during especially dangerous flights.

Now it is difficult to predict the victory of one or another participant in the competition. Obviously, each of them has its minuses and pluses. So, Valor will be able to boast more speed, and the choice in favor of SB-1 will reduce technical risks.

The Future Attack Reconnaissance Aircraft (FARA) program, as noted above, is designed to replace the decommissioned OH-58 and complement the AH-64. It cannot be ruled out that in the future the new product will generally replace Apache, but so far the Americans are generally happy with their attack helicopter. 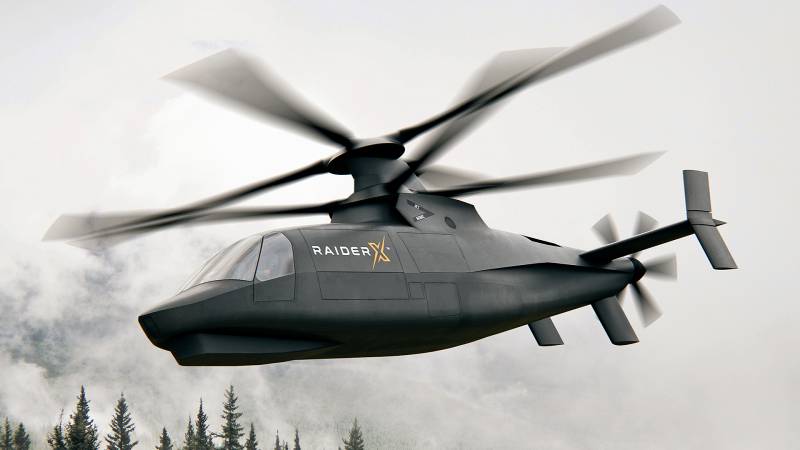 The farthest Sikorsky moved forward in this direction, who on May 22, 2015 lifted the Sikorsky S-97 Raider, built according to a coaxial scheme with a thrust propeller in the rear. First introduced at the autumn exhibition AUSA (Association of the United States Army) 2019 Raider-X - its direct development. In fact, we have before us the “fattened” S-97: the size difference is about 30%. It is estimated that the unit will be able to reach speeds of approximately 380 kilometers per hour using the General Electric T901 engine. In one of the images shown, you can see the Raider-X, which has a built-in gun and carries eight air-to-surface missiles on its internal holders. The location of the crew members side by side makes the machine with OH-58, and shock capabilities bring it closer to Apache.

So far, Raider-X is not in hardware. If Sikorsky does not have serious problems, then the company, according to the terms of the competition, will begin testing the prototype at the end of 2022 and, in case of victory, will organize serial production of the new machine in 2028.

The main challenge for Sikorsky in the framework of FARA is not the innovative Raider-X layout and related technical difficulties, but the direct (and now the only) competitor in the face of the Bell 360 Invictus. It is worth recalling that other competitors (a project from AVX Aircraft and L3 Technologies, the development of Karem and the concept of a combat helicopter from Boeing) dropped out of the competition in March this year.

Invictus is a relatively “conservative" project built around a traditional aerodynamic layout. Also, the machine has a proven tandem crew location for combat helicopters: like the Mi-28 or Apache.

Externally, the Bell 360 Invictus helicopter is similar to the long-closed Comanche program, but conceptually there are differences. The main thing is that a promising machine is not an "ultimate" stealth: its unusual appearance is a consequence of the developer's attempt to provide maximum flight performance at the lowest cost.

And yet, even though the project is based on Bell 525 Relentless technologies, it is a fundamentally new machine. That is, nothing can be excluded: first of all, that the prototype and especially the serial version will not differ from the layout shown earlier last fall.

It is known that the machine will be able to boast an impressive arsenal: in the images presented, the helicopter carries eight air-to-surface missiles on an external sling and four more on internal holders. We can say that in terms of armament it will not concede to the RAH-66 Comanche, and possibly to the AH-64 Apache.

Of the above helicopters, only two will receive a ticket to life: the remaining two, most likely, will sink into oblivion. We also note that the four machines presented above are by no means all projects of high-speed helicopters of the future for the US armed forces, but so far we don’t know anything about others, except for a multi-level concept.