The Zemsky army of 1922: a short history and a hopeless battle 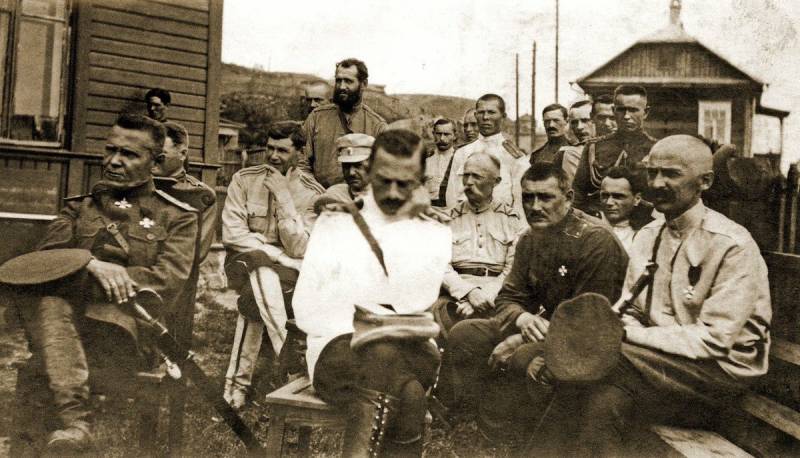 In July 1922, the Zemsky Army was created in the Far East - the last somewhat large military formation of the White Movement, operating on their native land. History its short, and fate is tragic. Without going into ideological reasoning, let us try to reflect on whether it could have been different at that time and under the existing conditions.


By the summer of 1922, the position of the White movement in Russia was no longer catastrophic, but hopeless. All battles and battles that could be lost were lost. In fact, all the armies that opposed the Bolsheviks were completely defeated. Crimea was taken, Kolchak was defeated and shot by the Left Social Revolutionaries, the Czechoslovak corps retired from the country, and the Entente countries clearly showed that they would not fight seriously with the Reds.

The Far East is the last fragment of non-Soviet Russia, and even this is mainly due to the fact that quite significant forces of the Japanese army are concentrated on its territory. However, they are also actively preparing for the evacuation: both Americans are pressing on Tokyo, who have not worked out well with the intervention in Russia, and they categorically do not want to strengthen the Japanese positions there, as well as their own opponents of the war. If in the Land of the Rising Sun it came to the formation of the Communist Party and the "Society for the Rapprochement with Soviet Russia", then the soldier, perhaps it is better to return home. Yes, and this adventure is too expensive, which turned out to be not so economically advantageous.

In the camp of whites, holding positions only in the Amur region, meanwhile there is complete strife: the People’s Assembly opposes the already decisive government, it is supported by the military, and ultimately the Amur Zemsky Territory appears under the leadership of some historians as the Amur State Formation “ the last knight of the White Movement ”, Lieutenant General Mikhail Diterichs. This military leader with great combat experience was undoubtedly a monarchist to the core: in accordance with the traditions of the Russian Empire, the Amur Zemsky Sobor was convened in Vladivostok.

The decisions made by this meeting were as noble and beautiful-hearted as they were unrealizable in practice. They decided to appeal to the surviving representatives of the Romanov dynasty to transfer “legitimate authority” to them, and until the true sovereign returns to the throne, transfer the powers of the supreme ruler of Russia to Diterichs. The general, who accepted the rank of commander-in-chief (zemstvo governor), by his first decree created the new armed forces of the Amur Region - the Zemsky army. This army will be routed in less than 3 months after formation. The offensive against the closest Bolsheviks, the Far Eastern Republic, will be successful in just two weeks, after which it will choke and, turning into heavy defensive battles, will end in complete collapse.

Why did it happen so? Indeed, under the leadership of Diterichs, it was by no means the “green” recruits who fought, but the “Semenovtsy” and “Kappelites,” soldiers and officers with tremendous experience and combat potential. The total number of Zemsky ratification personnel at the beginning of its offensive operations exceeded 8 thousand, most of which were veterans, war professionals. They were also equipped quite well: the Japanese army leaving the Russian land rather generously shared with the army of Diterichs weapons and ammunition. The "Zemstvo", among other things, even had four armored trains. However, the trouble was that it was in reality all the forces of the whites. In fierce battles with the advancing parts of the Reds, constantly fueled by reserves, they quickly melted. These battles were virtually hopeless.

All attempts by Dieterichs to make up for human losses by mobilizing - at first partial, and then universal, in fact, did not lead to anything at all. The local population categorically did not want to fight, (at least for the whites), and potential recruits simply scattered somewhere. With the same success, the zemstvo governor tried to improve the material situation of his troops: his appeals to entrepreneurs, merchants, wealthy people of the Amur region, for obvious reasons completely not interested in the Bolshevik victory, did not lead to any real results. A lot of patriotic big words - and absolutely penny "donations" for which it was impossible to equip and arm even a company.

The tragic history and agony of the "small and fearless" Zemsky rati was the latest evidence that the Civil War was completely lost by the whites. Moreover, in the first place, they were defeated not on the battlefield, but in the battle for the minds and hearts of people. No matter how beautiful and noble the monarchical ideas of Dieterichs may sound, the restoration of the autocracy did not at all suit the vast majority of workers and peasants, whom the Bolsheviks promised not only “freedom of equality and fraternity”, but quite concrete land and factories with factories.

Moreover, in the Far East, the partisan movement played a much larger role than the regular units of the Red Army in defeating the White Guards. “Thank you” for the fact that the inhabitants of this region, who initially reacted to the Soviet regime without the slightest enthusiasm, started the war against the “liberators” in gold uniforms, the latter should have said the terror that was launched in this territory not only by foreign invaders - the same Czechoslovak corps, the Japanese or the Americans, and the army of Kolchak. Yes, Diterichs was a categorical opponent of all violence against those who did not want to fall under his banner, and strictly forbade the use of any repression against them. He only with deep sorrow of the true knight asked: “Where is the service of the idea?”

There were no people willing to serve among the residents of the Amur region. Remaining without replenishment, and in the very near future without cartridges, the Zemsky army was defeated, revealing, however, another example of an unbending Russian military spirit. Formed in the summer of 1922, it ceased to exist by October.

Ctrl Enter
Noticed a mistake Highlight text and press. Ctrl + Enter
We are
Chernobyl notebook. Part of 3Kolchak's liquidation
81 comment
Information
Dear reader, to leave comments on the publication, you must to register.