Russia in the Arctic: the main irritant for the United States 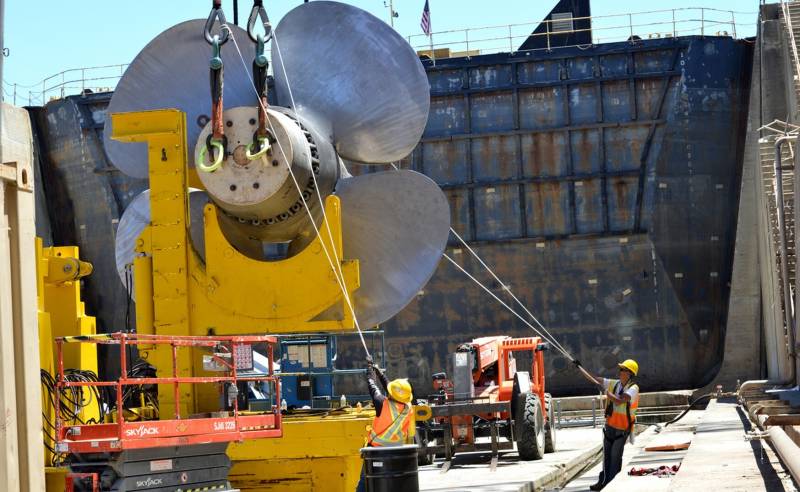 Read the first part of the article. here.

Another aspect of renting

Back to the idea of ​​renting an icebreaker or icebreakers. A lease arrangement often restricts how a vessel can be used under lease terms, which is also not very comfortable with UCWR. In 2017, a study by the National Academies of Science, Technology, and Medicine, sanctioned by Congress a year earlier, concluded that leasing icebreakers was not a viable route for the Coast Guard.

Chartering (operating leases) is not a viable option, the study notes. Buying is also quite difficult. The availability of polar icebreakers in the open market is extremely limited. (The Committee is aware of the sale of only one more or less large icebreaker since 2010.) The American experience of chartering a polar icebreaker for the Antarctic expedition replenishment mission was problematic in two previous charter attempts (with Sweden and Russia).

“Chartering can be carried out only in case of short-term necessity and a specific mission. The Committee notes that chartering may prevent BOHR from performing its many tasks. ”
In its own study of the environmental impact of the Coast Guard in 2019 for the Polar Security Cutter (Coast Guard icebreaker) program, the service concluded that there were no vessels available for rent that would “substantially satisfy” the operational requirements for it icebreaking needs.

In addition, any lease should be such that the Coast Guard provides for the manning, training and equipment of the vessel, taking on all expenses while paying the privilege of having it, which makes such an arrangement a financially dubious prospect.

Alaskan Republican Senator Dan Sullivan, an energetic lobbyist for the US Senate Committee on US Armed Forces to channel more resources into the Arctic, said the memorandum would “add weight” to continued efforts to build America’s presence in the Arctic. “Our opponents are far ahead of the United States when it comes to Arctic infrastructure,” Sullivan said in a statement.

“We have one heavy semi-functioning and one medium functioning icebreaker of the polar class, while in Russia there are more than fifty of them. I fought for five years to bring Arctic issues to the fore, including the FY19 NDAA, to allow the construction of six such icebreakers, and put forward a bill to develop the capabilities and locations needed to support a permanent presence in the Arctic. ”
.
Although the president’s memorandum seems to have taken regional observers by surprise, its content is consistent with the administration’s rhetoric regarding the region, said Eric Brattberg, director of the European Program at the Carnegie Endowment. “The Trump administration has shown increasing interest in Arctic issues in recent years, due in particular to the growing presence of China in the region,” said Brattberg.

“While America’s allies and partners in Northern Europe would welcome a broader US presence in the Arctic, they also fear that the region is becoming more visible due to competition between the US, Russia and China.”
The "growing" Chinese presence is expressed in the presence in the PRC of as many as two research icebreaking vessels, and this is nothing more than an occasion.

The main irritant is Russia

But the best reason is, of course, Russia. The Russian Federation, in particular, made it clear to the international community that it has basic economic interests in the Arctic, and it will defend them, even building icebreakers with cruise missiles and other weapons and building military bases that cover airspace with its air defense systems, air defense systems and based there aviationand long-range coastal missiles with supersonic and soon hypersonic heavy missiles. A country with 7000 nautical miles of the Arctic coast sees the region as the key to its long-term economic success. In 2017, President Vladimir Putin estimated the region’s mineral resources base at 30 trillion. dollars. Well, can they endure this in the USA? Indeed, some other superpower is located over their personal resources!

At a February hearing in the Congress subcommittee on transport and maritime security, Deputy Assistant Secretary of State for European and Eurasian Affairs Michael Murphy said Russia's military build-up in the Arctic threatens the northern flank of the United States and NATO. Although Russia is cooperating in the field of oil spill response and search and rescue operations, the United States is suspicious of the country's actions, especially in creating the Arctic base and installing coastal rocket batteries, early warning radars and air defense systems, Murphy said in a statement.

“The buildup of Russian military power in the Arctic has consequences beyond its borders,” he said.

“From a geostrategic point of view, the Arctic and the North Atlantic are inextricably linked. The Arctic provides Russian ships and submarines with access to the most important naval hub: the Juk gap, which plays a huge role in NATO’s defense and containment strategy. Transatlantic submarine cables also pass through the area. ”
“In short, NATO’s northern flank should once again draw the attention of the United States and its allies,” he added.

Similar to its fears for freedom of navigation in the South China Sea, which has become a hot spot in Sino-U.S. relations, the United States cast doubt on Russia's attempts to force shippers to use Russian pilots and to pay for the use of the Northern Sea Route, passing through Russia's exclusive economic zone. Russia has invested heavily in icebreakers to keep the Northern Sea Route open for as long as possible every year, and therefore the country sees it as a kind of toll road.

“Russia's restrictions on freedom of navigation along the Northern Sea Route do not comply with international law,” Murphy said. Murphy, of course, forgot to mention the fact that almost the entire Northern Sea Route passes either in the exclusive economic zone of Russia, or in territorial or adjacent waters, and Russia has every right to do this, and also bears responsibility and expenses for the maintenance of the NSR.

In general, they are worried, you know, for our Northern Sea Route. And the more cargo turnover will be there (and it grows by leaps and bounds and far exceeds the Soviet peak indicators for more than a year), the stronger it will be strengthened, the greater will be the anxiety. It is important to strengthen even better so that anxiety does not outgrow the stages of elbow biting from envy. And as for the Americans building icebreakers, let them, of course, build or buy. In the Arctic, there will be enough work for everyone, especially if you don’t climb where you didn’t ask.

Ctrl Enter
Noticed oshЫbku Highlight text and press. Ctrl + Enter
We are
Trump ordered the construction of new icebreakers by 2029. But the old will die soonerArctic Front. Regarding the movement of Russia to the north
Military Reviewin Yandex News
Military Reviewin Google News
57 comments
Information
Dear reader, to leave comments on the publication, you must to register.