Trump ordered the construction of new icebreakers by 2029. But the old will die sooner 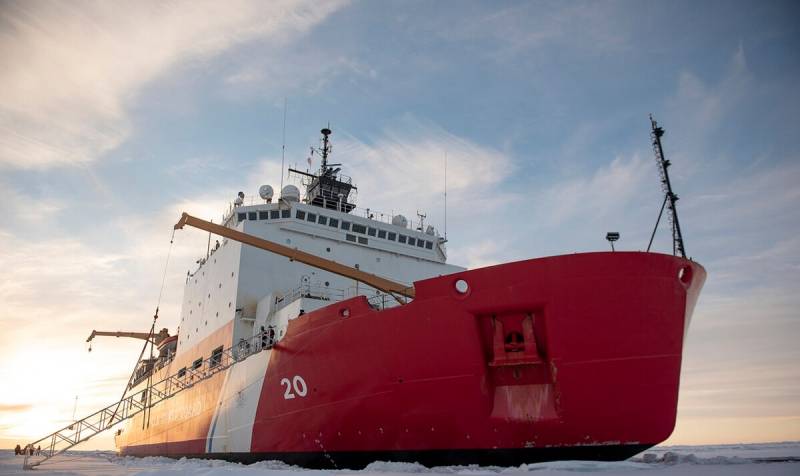 US President D. Trump ordered a review of the requirements for his country's icebreaking capabilities in the Arctic and Antarctic, in particular, he wants new icebreakers for the US Coast Guard (in the US, the icebreakers belong to her and are listed as patrol ships, more precisely, “boats”) put into operation by 2029. This is stated in a memorandum published the other day.

This document was sent to the US Department of Defense, the State Department, the Department of Homeland Security and several other departments, in particular, to the Office of Budget Affairs. Most of the document consists of instructions on work already begun. For example, on research and development of projects for three heavy icebreakers, with which it is planned to replace the current one half-dead Polar Star icebreaker and one dead (used as a warehouse for spare parts for the first) Polar Sea heavy icebreaker, as well as the medium icebreaker (more precisely, icebreaking transport) Healy. It also says that for other planned ships (there were plans for three medium-sized icebreakers), for which no contracts were concluded, it was necessary to conduct a review in order to understand whether they were needed at all and which ones, or whether the issue could be solved in some other way.

The memorandum calls for "an assessment of enhanced operational capabilities, taking into account the estimated associated costs, for both heavy and medium-sized U.S. military command and control vessels, which have not yet been contracted, in particular, including the maximum use of any such ship in relation to its ability to support national security goals. ” This revaluation should be done after 60 days. The Trump directive on evaluating the current plan for building Arctic marine capacity over the next decade is a sign that the administration is increasingly concerned about the activities of Russia and China in the northern region (or uses this as an excuse to knock out money for icebreakers). You see, this activity “could threaten America’s interests at critical points,” such as the Greenland-Faroe-Icelandic border. True, there is no explanation in the document about how this is how nuclear and diesel-electric heavy-class icebreakers in Russia can affect this very, at present, practically “virtual” anti-submarine line, if they themselves do not leave the Arctic, and to our submarines their services are needed like scuba fish. To leave the base, a regular port icebreaker is enough, and then the boats simply plunge.

In April 2019, U.S. BODC announced that it had signed a $ 746 million contract with VT Halter Marine from Pascagula, Mississippi, for the detailed design and initial construction of its first heavy icebreaker. And on the draft budget for fiscal year 2021, now, before preliminary discussions by its Congress, the Coast Guard states that it can finance a second icebreaker. But the memorandum calls for a review of what the appropriate combination of vessels should be for the Arctic fleet: It is anticipated that some changes may be made to the plans for the middle three icebreaking vessels.

The memorandum contains a request to consider the needs in the Arctic, covering the whole range of tasks to ensure national and economic security (including facilitating the exploration and exploitation of resources and the laying and maintenance of submarine cables) that can be performed by the medium-class icebreakers, as well as an analysis of how these use cases differ with respect to the intended use of heavy RBF icebreakers for the same activities.

“These use cases will allow us to determine the optimal number and type of polar coast guard icebreakers to ensure a permanent presence both in the Arctic and, accordingly, in the Antarctic regions,”
- said in the memorandum.

Simply put, it is proposed to think about whether it is possible to do without these three medium-sized icebreakers by reducing their number to zero or some other size or otherwise solving this problem. Probably, no extra funds are expected, and, despite the powerful shipbuilding industry, few people can build icebreakers in America at least somehow, so the capacity is limited in this matter.

The issue of nuclear powered ships is still purely theoretical

It is proposed to think whether it is possible to build heavy icebreakers with a nuclear power plant or not. But the design of a new icebreaker is already being funded, and the issue of the type of power plant should have been resolved right away! But in general, the United States is not inclined to use atomic energy for icebreakers, although this document says that only currently operated by Russia (and generally always), these vessels provide a long and little limited presence in polar waters. But, despite the experience of atomic surface and especially underwater shipbuilding in the United States, there is no experience building exactly atomic icebreakers, the difference between an aircraft carrier and an icebreaker with a nuclear power plant is great, and even a power plant from one may not work for the other.

Basically. in the world, two countries built atomic icebreakers in general, and one of them built according to the project and under the supervision of the other, and without nuclear power plants and much on board. This is Finland. But it is unlikely that the Finns will be able to greatly help the Americans in this matter: they do not fully possess the working design documentation for the Taimyr and Vaigach icebreakers, and the people who built them have long since quit or have already died. More than 30 years have passed.

The memorandum also calls for a study to identify two locations in the United States for their ice fleet, as well as two international facilities that, say, can be rented for these purposes (apparently in the Canadian Arctic). 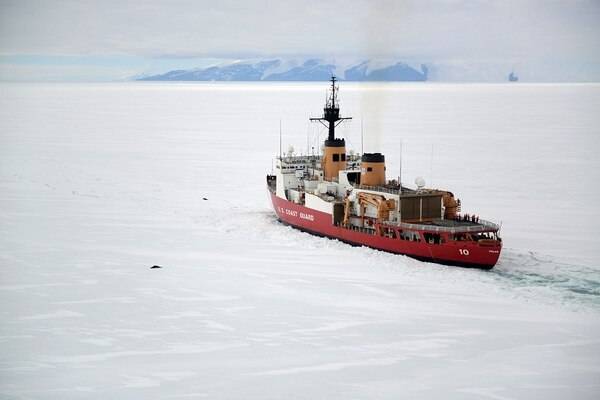 The Polar Star heavy gas turbine icebreaker is still alive, but not for long
In addition, given that the Coast Guard has the only operating heavy icebreaker Polar Star, which is 44 years old, the memorandum calls on agencies to identify potential vessels in different countries that could be leased as an interim measure. The fact is that Polar Star now lives in the "race to the Antarctic for the next expedition - arming for repairs to prepare for a new trip there." It is gas turbine and powerful enough for a non-nuclear, but very voracious and even capricious in youth. It is believed that by 2023 he will "die" completely, he will have to be written off. The medium-sized diesel-electric icebreaker (essentially an ice-class research vessel with very modest capabilities) Healy will live longer until the end of the decade (although it was put into operation recently, in 1999). But an icebreaker is still needed, so the option of leasing someone with a sufficiently powerful vessel or a pair of vessels is being considered while new icebreakers are being built. Or temporary rent will turn into a permanent one. The only question is: where to get such icebreakers for rent?

Finns are ready to build, Americans are not ready to buy, although they would like to

Icebreaking fleets in Sweden, Finland and Canada are modest enough, and there are few or no Arctic vessels of medium or heavy class. The Finns could build a non-nuclear icebreaker or a series - yes, they have a lot of experience, during the USSR non-nuclear icebreakers were ordered from the Finns very actively. But the Finns have nothing to rent out - they have 7 medium and light ships, of which 3 are either of the same age as the Polar Star, or older than it, and all of them, except Nordica and Fennica, built in the first half of the 90s, are designed to work in the Baltic . Although, of course, one of these may be leased, moreover, the Finns have long tried to either sell or lease an icebreaker in the USA or to obtain an order for construction. The possibility of renting could become a springboard for Finnish shipbuilding in an attempt to break into the American market.

But there may be problems with the Jones Act, which is already 100 years old and signed by Woodrow Wilson after the First World War. The law aims to ensure the stability of the US marine industry by supporting the "domestic producer." His goal was to help US shipping recover from World War I. Jones law requires that all ships carrying goods between two points of the United States, were built by the Americans, belonged to them, had crews and US flags. And, although 97% of US foreign shipments are carried out on ships not necessarily made there, this item is strictly enforced. Despite the lobby advocating for the repeal of the Jones Act, no one will cancel it now due to the US economic crisis, otherwise it will only increase problems in the industry right away.

Where else to get icebreakers? Go through the bazaar - ask the price!

Canadians have 6 ships, but they are also very old and mostly light class, and we need such a cow ourselves, yet Canada has a large Arctic sector, and the Northeast Passage is not similar to our Northern Sea Route in terms of the severity of the ice situation, it’s often under construction we have a superheavy "Leader" LK-120 and will pass. Of course, to the detriment of himself, if the American owner orders, maybe they will lease it. So saying, giving his wife to his uncle.

The Swedes have 6 icebreakers, 3 of which are also of the Polar Star age, the most powerful, the medium-sized icebreaker that can operate outside the Baltic - exactly one, Oden, and there are 2 more light classes that are also capable of this (but the Americans do not need them). Although the United States rented icebreakers from Sweden and Russia in 2012, when the Polar Star was stuck in the next repair, and the icebreaker was needed for the rotation of the expedition in the Antarctic. Then, in particular, our Krasin was involved in this task.

Maybe the Americans in Russia should rent one of its fifty icebreakers? We probably would have gone towards the "partners" and probably could have built them, and we would not have been afraid of the "loss of influence" after the appearance of one or several icebreakers in the USA. But the Americans themselves won’t do it now, because it’s clear to every last Democrat and Republican in the Capitol that the “Russian racists” will immediately “interfere in the elections” through the construction of the icebreaker and elect Putin as president. All other “icebreaking” owner countries either have 1-2 vessels of light power class that can operate in uncomplicated (by the standards of the Arctic and Antarctic) ice conditions and do research. Or they have purely Baltic icebreakers, like Denmark with its 4 ice-breaking tug boats of light power class like “Viking” (the same “Vikings” have 2 Swedes who built them, and even we had 1 of them at one time, now he is flying the Canadian flag).

Ctrl Enter
Noticed oshЫbku Highlight text and press. Ctrl + Enter
We are
Arctic Front. Regarding the movement of Russia to the northStrangulation: the context, conduct and consequences of the American naval blockade of China
Military Reviewin Yandex News
Military Reviewin Google News
37 comments
Information
Dear reader, to leave comments on the publication, you must to register.