The myth of the Soviet occupation of the Baltic states 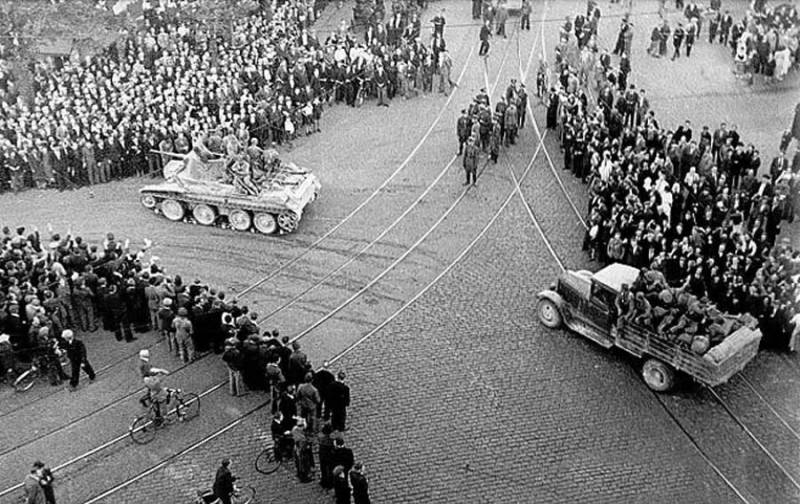 80 years ago, in June 1940, units of the Red Army entered the Baltic states and occupied the original Russian lands lost during the collapse of the Russian Empire and the intervention of the great Western powers. The Baltic outskirts again became Russian. This event was of strategic military importance: on the eve of the great war, the USSR strengthened the northwestern borders.

In the context of the great war in Europe, the Baltic states were of strategic importance. It was a bridgehead from which the Third Reich could deliver a quick and crushing blow to Leningrad. The security of Leningrad-Petrograd since the time of the Russian Empire depended on the situation in Finland and the Baltic states. The Russian army shed a lot of blood so that these lands were included in the Russian state. Moscow solved the Finnish problem in the winter of 1939-1940. The time has come for the Baltic states.

It is worth noting the non-independent, border and buffer nature of the Baltic state entities: Estonia, Latvia and Lithuania. After the collapse of the Russian Empire, the nationalist liberal bourgeois regimes that seized power in them pursued a policy hostile to Russia. These states in their foreign and military policies were guided by the Western powers: Germany, England, France and Finland. With the tough confrontation with the West approaching, the Soviet Union could no longer tolerate their hostile policies. A possible enemy bridgehead had to be eliminated one way or another.

In order to prevent the threat of the seizure of the Baltic states by the Nazis and attacks on the USSR through their territory, the Soviet government in the autumn of 1939 negotiated with the governments of these republics on the issue of mutual security. Negotiations completed successfully. Mutual assistance agreements were signed: September 28 - with Estonia, October 5 - with Latvia and October 10 - with Lithuania. Moscow pledged to provide assistance to the Baltic states, including the military, in the event of an attack or threat of attack from a European state. In turn, the Baltic countries promised assistance to the USSR if it was attacked through their territory or from the Baltic direction. The agreements contained obligations not to enter into any alliances and not to participate in coalitions directed against one of the parties to the agreement. 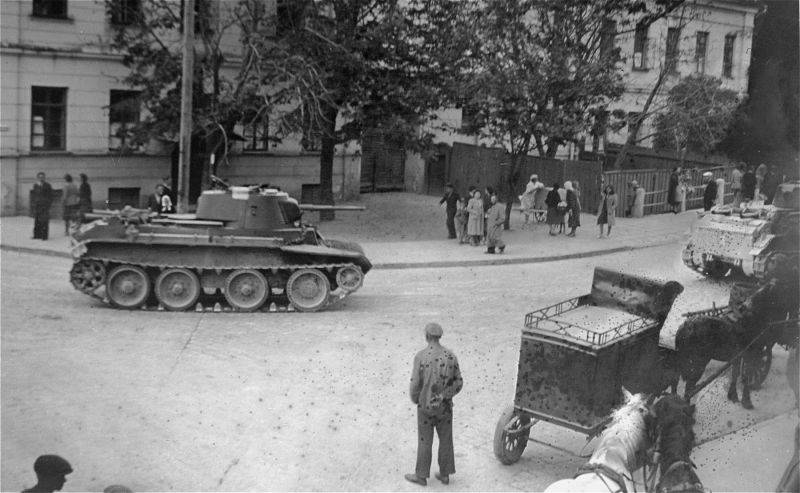 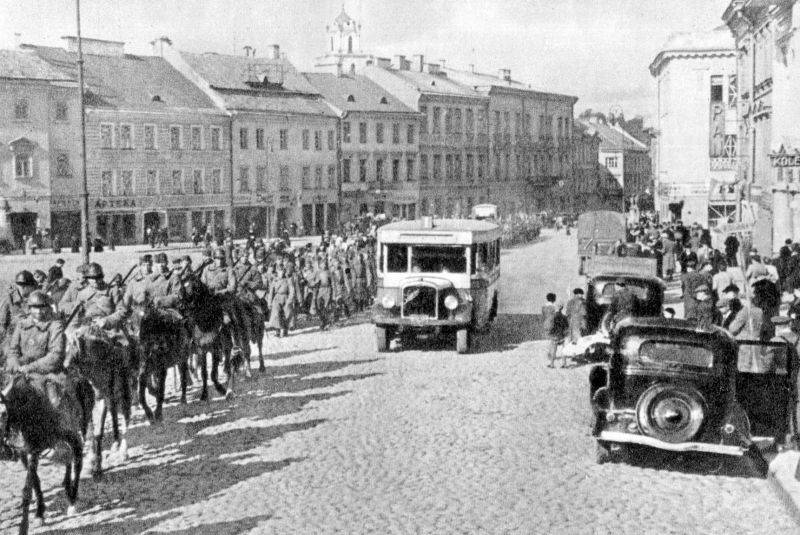 Parts of the Soviet Army in Vilnius

Stalin acted very carefully, preferring to act for sure. However, the situation in the world, Western Europe and the Baltic was difficult. The Baltic authorities have repeatedly violated the just signed agreements with Moscow. Many representatives of local authorities, often in nationalistic positions, were hostile to the Russians. When Soviet military bases began to equip in Estonia, Latvia and Lithuania, various provocations took place. Secret consultations took place between the governments of the three Baltic republics, united in an alliance within the Baltic Entente. Attempts to lie under the Third Reich did not stop. Moscow knew about this (including from the Germans, who so far benefited from an alliance with the Russians), but for the time being these tricks suffered.

The right moment to solve the Baltic question came in the summer of 1940. In the worsening military-political situation in Western Europe, the ruling circles of the Baltic states were actively looking for an opportunity to join strong, that is, Nazi Germany. France and England could not intervene. Germany needed Russia's support in conditions when almost all divisions were on the French front. Immediately after the fall of Paris, the Baltic regimes were presented with official lists of violation of treaties on their part, ultimatums were attached to them. Moscow raised the question of removing people hostile to the USSR from the government, lifting the bans on the activities of communist parties and their access to parliaments and governments. All three republics were supposed to accommodate additional contingents of the Red Army. At the same time, the Soviet government, in the guise of exercises, fully prepared the troops of the Leningrad, Kalinin and Belorussian Special Military Districts. Soviet troops began to advance to the borders of the Baltic states.

The Baltic Limitrophs panicked, rushed to beg for help from the Nazis. However, Berlin was not up to them. Ribbentrop did not even receive the ambassadors of the Baltic countries and their address to Germany. Lithuanian President Smetona wanted to resist, but most of the government and parliament opposed him. He fled to Germany, then to the USA. In Estonia and Latvia, the ultimatum was accepted unconditionally. On June 15-17, 1940, additional Soviet troops entered the Baltic states.

Republics were quickly sovietized. Authorities of the Soviet government were responsible for this process: Zhdanov (Estonia), Vyshinsky (Latvia) and Dekanozov (Lithuania). In the new parliamentary elections on July 14, 1940, the pro-communist Unions of the working people won. They received the vast majority of votes - over 90%. The new parliaments on July 21–22 proclaimed the creation of the Estonian, Latvian, and Lithuanian SSRs, and adopted the Declaration on joining the USSR. On August 3-6, 1940, the Baltic republics became part of the Soviet Union.

They knew perfectly well about the upcoming accession to the Soviet Union of Estonia, Latvia and Lithuania in Berlin. Ribbentrop and the German ambassador in Moscow, Schulenburg, corresponded about this. By agreement with the Reich, the fall of 1939 began the repatriation of Baltic Germans to historical homeland. And in the spring in Germany they hastened a little and published maps where the Baltic states were shown as part of Russia. The British head of the Admiralty Churchill in October 1939, after the fall of Poland and before the Red Army entered the Baltic states, noted that the actions of the Russians were caused by the prevention of the Nazi threat by Russia. Moscow is forced to stop the Reich’s plans for the Baltic states and Ukraine.

Thus, Moscow, as the war was approaching, very skillfully used the temporary alliance with Germany. While Hitler was tied up in the West, and France and England were defeated, Stalin was able to return the Russian suburbs, torn away from Russia during the time of unrest. Estonia, Latvia and Lithuania did not have autonomy before the revolution in Russia. By the way, the French, British and Americans fixed this rejection at the Versailles conference. Moscow solved the most important national task, restoring the unity of the state. Russia returned historically its lands, for which the Russians paid for many centuries with hundreds of thousands of lives. The country's military and economic potential has been strengthened.

It is worth noting that in the future, most of the population of the Baltic states only benefited from this. Only small groups of nationalists and the bourgeoisie lost, who benefited from the dependent position of their countries. The region from the backward agrarian periphery of Europe has become an industrially developed part of the Soviet state, a "showcase" of the USSR. And after the collapse of the USSR, the Baltic states returned to the past: it became a backward unnecessary outskirts of Western Europe. Without industry, the future and a rapidly dying population. 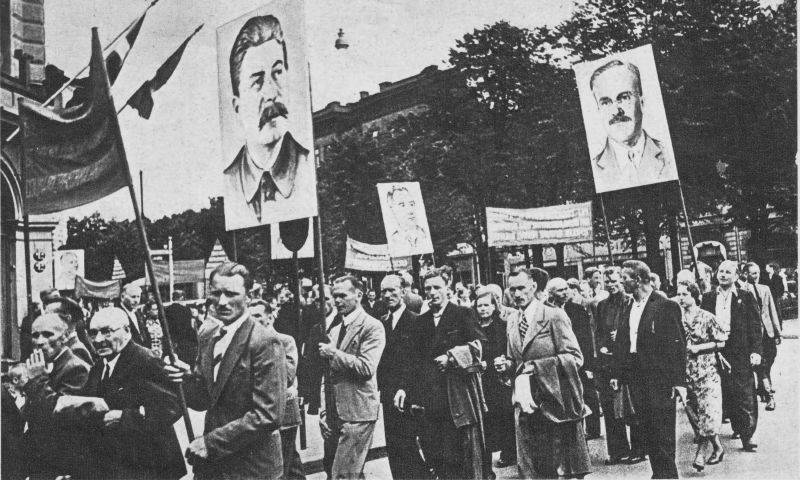 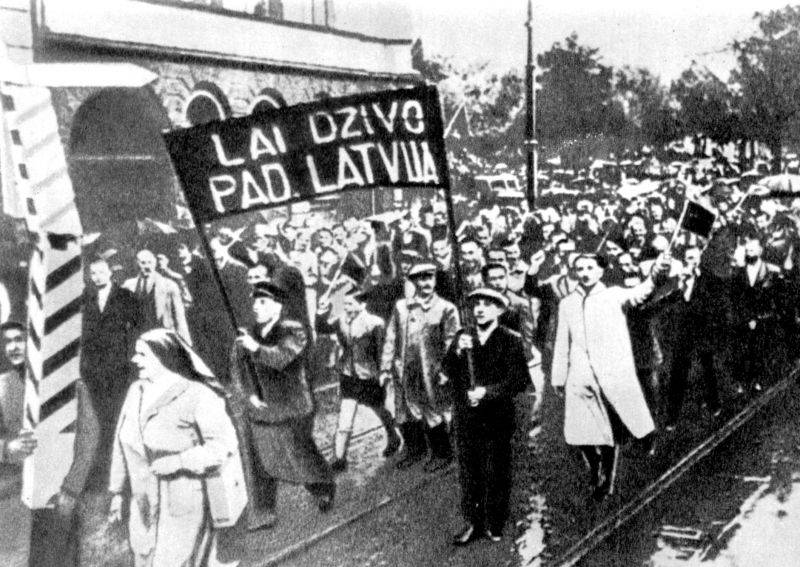 Holiday in Riga on the occasion of the adoption of the Republic of Latvia into the USSR. August 6, 1940