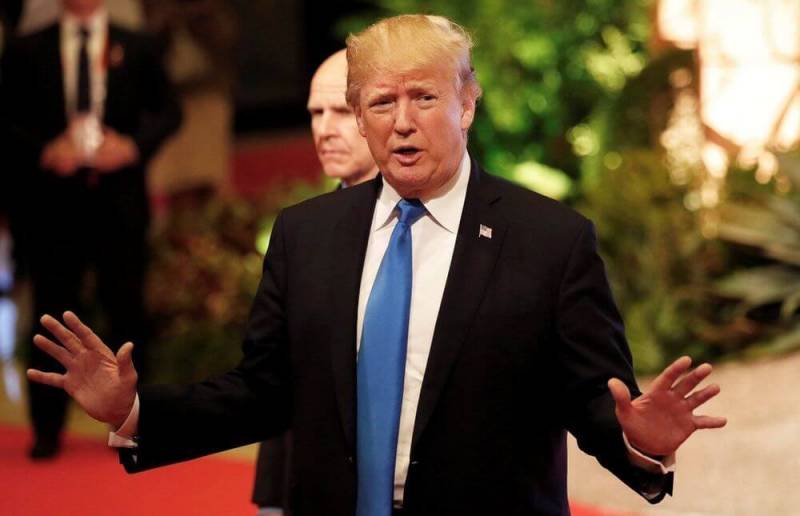 No fakes and no trolls

Across the ocean, such a text can be safely written as another Russian attempt to influence American choice 2020. However, in Russia now, only journalists from the parliamentary pool recall how in the late autumn of 2016, our Duma members “celebrated” the victory of Donald Trump. The picnic on the side of the road was even brighter than the celebration of the amicably failed impeachment of Russia's first president Yeltsin.

In fact, time has confirmed the correctness of the choice of Russian lawmakers, no matter how they are treated now. With the Republicans in the White House, Washington, not ours on the Moscow River, some kind of partnership of Russia always succeeded a little better than with the Democrats. The latter are so bogged down in the ideas of tolerance and cardboard democracy that they still cannot fit worthy leaders under them - “real violent,” like Vysotsky’s.

Personnel transit Obama - Hillary - old Biden is quite impressive on its own, especially since in American practice, too often, specific people are more important than ideas. Especially in conditions of their almost complete absence. The idea of ​​kneeling all the “whites” in all likelihood does not work, as, however, it is unlikely that it will do anything more concrete on the basis of the renewed International. 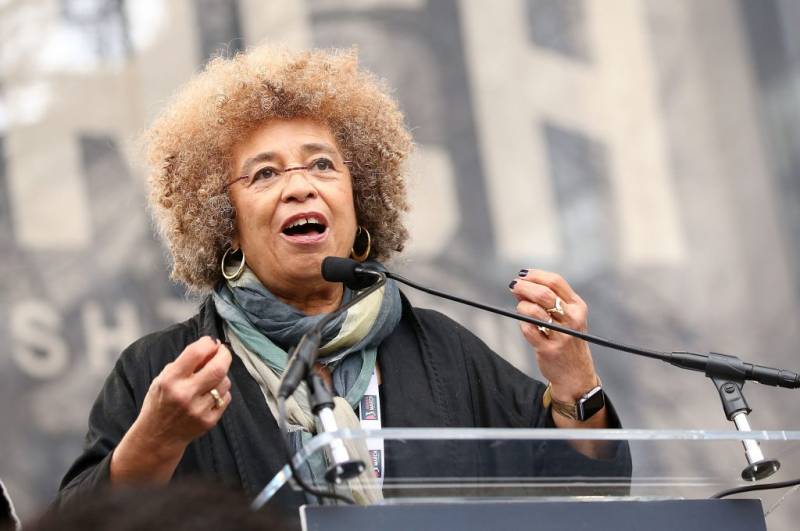 On the sidelines of the UN, the matter has already reached a public obstruction to the “Black Square”, and the long-forgotten heroine of hundreds of Russian jokes Angela Davis (pictured above) can spread as much as she wants about the revolution that began in the USA. However, she should be reminded that in American stories it’s hard to find a larger Republican, not by party affiliation, but essentially by than Democratic President Franklin Roosevelt.

The current owner of the White House cannot but be given credit for the fact that he did not hesitate in the midst of anti-virus hysteria to make his own, almost the most hysterical forecast for 200 thousand American victims of coronavirus. Moreover, Trump had the courage to even call it a good result.

So far, everything seems to be going to the point that the final result for the cowboy and the athlete can be much better. However, Trump neither then nor now thought to admit that the terrible losses from COVID-19 in the USA are directly related to the complete collapse of the very idea of ​​building at least some semblance of social medicine, which his predecessor Barack Obama could not bring to mind.

If someone forgot, so in 1912 Lenin called one of his most comprehensive works criticizing the Stolypin transformations in the countryside. Moreover, after the tragic death of the prime minister, who is now customarily unambiguously called "great." The valve did not work due to the World War, the peasants wanted land - all at once, but in the end they got collectivization and life without passports. 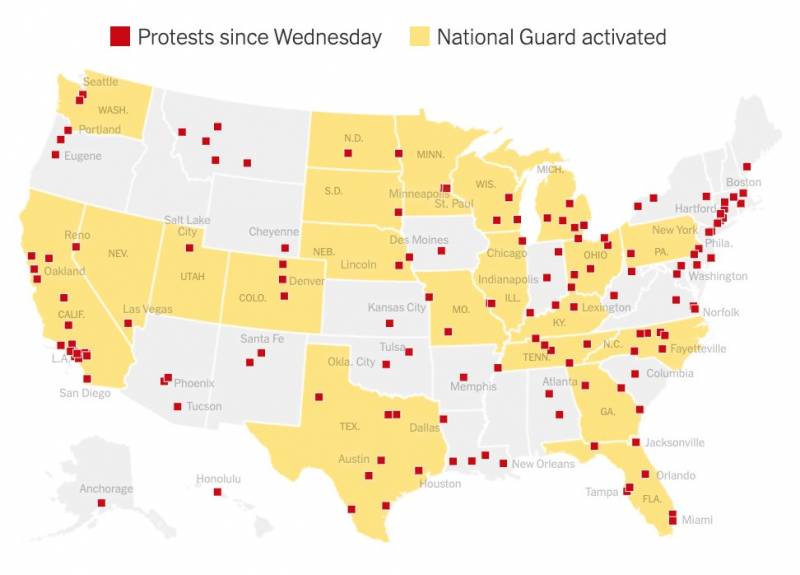 To argue with the classic here is a thankless task, especially since in this case it is more interesting to us what the last valve in the USA will be. A pause in the events that are now growing overseas can drag on until November. The steam seems to be released, the army is ready to crush the revolutionary hydra at any time and anywhere in the great country.

Trump’s advantage now is that all those who have so readily knelt down can at some point respond to his call to “get up!” Unless, of course, such an appeal will be. But to continue and continue to believe that now it is only a matter of not letting the current owner into the White House for the second time would be the height of naivety.

Kneading is designed much cooler. If necessary, US presidents were removed as easily as emperors in Russia. Nixon was impeached, and Lincoln, McKinley and Kennedy were simply killed. If it was only to vacate the main seat in the White House under Joe Biden (and who is his candidate for the vice presidency), it would hardly be worth arranging a crisis of a national scale.

However, the alleged pandemic allegedly announced directly from WHO turned out to be very handy, becoming a convenient reason for the implementation of such plans that at other times even large people would not be allowed to put on the table. What, in this sense, are at least Russian constitutional amendments that painfully resemble the thesis of rebellion: meaningful, but merciless.

Nevertheless, the fact that the “liberty” revolution, not at all the one Angela Davis is talking about with aspiration, cannot but be frightened, has already been exported. Color revolutions compared to this one are really just flowers. Here you have digital slavery and tolerance to the point of absurdity and a complete comprehensive taboo on the right to call a woman a woman. So give the opportunity - they will stick a mask on the moon and the sun.

The truly Shakespearean tragedy, “Obamaism and Trampism,” which is quite worthy of a separate analysis, is now culminating in all respects. Although the previous president of the United States is now rarely remembered for some reason. Probably because his success is already very doubtful and somehow does not draw on a comparison with Trump's business specifics.

The latter can now also be helped by the almost inevitable successes in the post-crisis economic recovery. Stock traders rarely make mistakes, and besides, a large-scale failure of a number of industries that have shown excessive independence, along with a dollar-pumped audience, designed to provide Keynesian "effective demand", should give at least primary return. 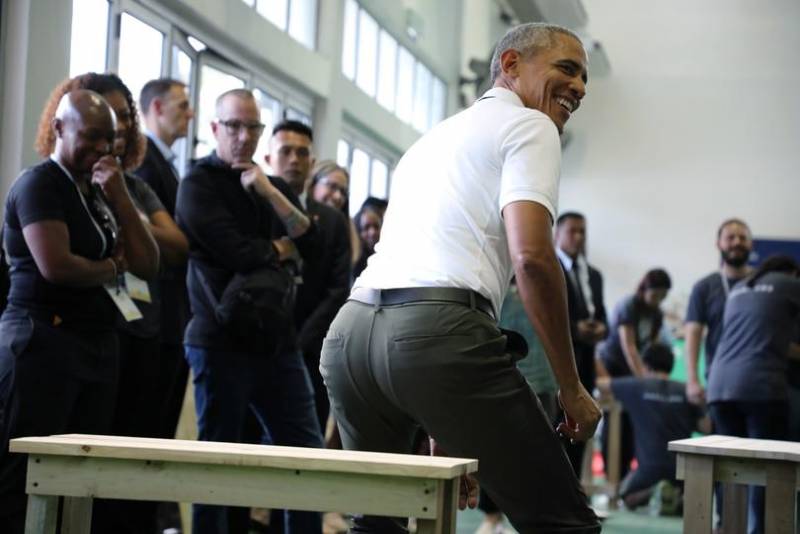 Barack Obama is not a very comfortable figure in the current context of false democracy. He was for true equality, and not for the rapidly gaining momentum, "Racism is the opposite." Moreover, the task in itself to provide a worthy place with “color,” and indeed with everything “different," is, you see, somehow small on the scale that seems to have been swung by the neoliberals of the whole world, calling itself "civilized."

It is clear that personally Donald John Trump somehow fit poorly into the list of successors to the Clinton-Bush bunch that served as the facade of the US governance system for more than twenty years. Republicans periodically patched holes after the Democrats, someone made money on it, big and very big, but Trump's isolationism and conservatism were clearly off scale.

His rejection of the US claims for global superiority, poorly veiled by trade wars, sanctions and interference everywhere and in everything, albeit indirectly, but helped lead China. Perhaps he saved Europe from economic "takeover" by the USA and China. And in many ways it helped not to remain “outside the brackets” of Russia.

Ctrl Enter
Noticed oshЫbku Highlight text and press. Ctrl + Enter
We are
Overseas ally? Donald Trump - US Presidential CandidateResults of the week. “In our cooperative, the board is always agreed”
Military Reviewin Yandex News
Military Reviewin Google News
75 comments
Information
Dear reader, to leave comments on the publication, you must to register.