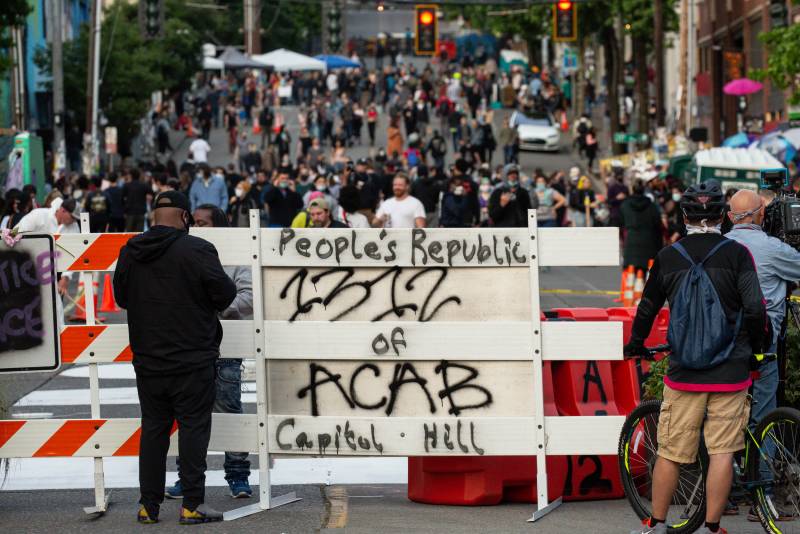 I began to look at all this with interest. Well, then, the union with Floyd, who died at the hands (actually from the feet) of the police, was impressive. The whole world shook.


Then apathy and deja vu began in my head. Somewhere I already saw all this. Riots, screams, screams, broken windows, burnt cars, cowardly hiding police officers, the complete inability of the authorities to put things in order ... For some reason, the ghost of Yanukovych immediately loomed behind Trump's slurred behavior.

And yes, of course, His Majesty the Maidan. 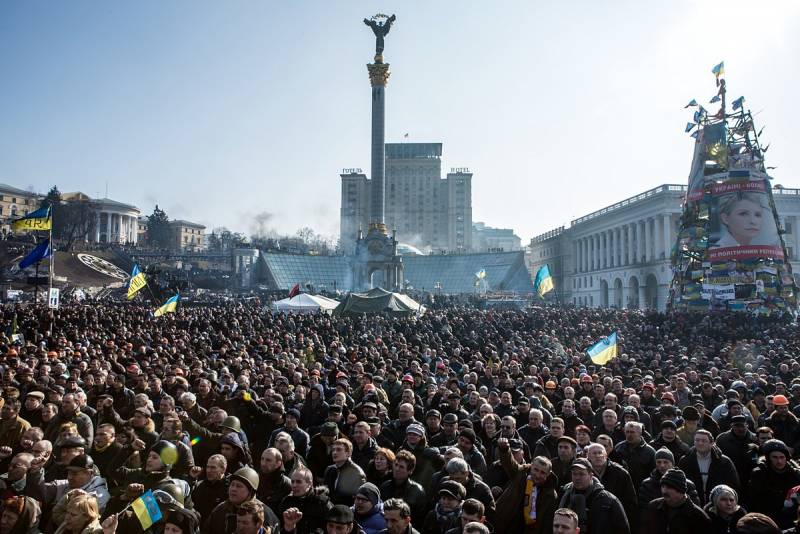 And not only in the territorial sense of the word, but also in the minds. The principles of the Maidan - they are in Ukraine, that in America alone. 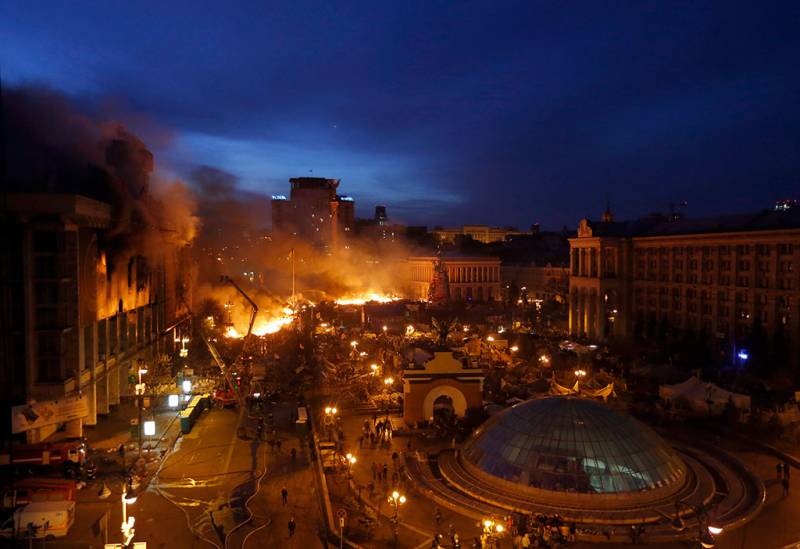 But let's compare in order.

Of course, George Floyd may well serve as an icon for those who need it. He personifies the protest. True, it is not clear who is against what, but the gang get! It’s familiar.

In general, with six arrests for drugs, four years in prison for armed robbery: well, really, what is not a fighter with the regime? Yes, the people of the “Heavenly Hundred” are not suitable for him even if they look soberly. But it’s better not to do this, sobriety is not always useful and objective. 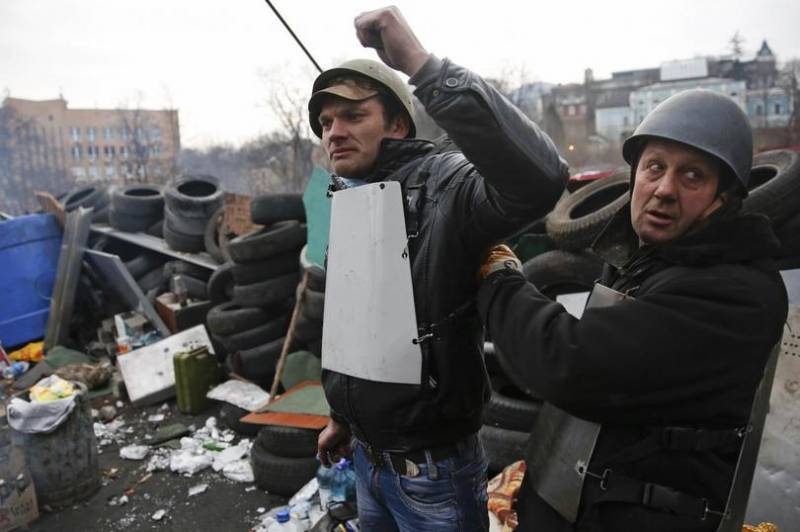 Well, that’s what we have. Maidan. With tents, its administration and so on. Apparently, the same brains work. Now, if not to disperse by winter, and the authorities are clearly not in a hurry, miraculously they will bring the stoves, blankets, cookies again ...

And most importantly - there is a leader. And not a shepherd of horses, but a person with a program. Yes, in the actions of Comrade Savant there is a lot of incomprehensible so far, her ideas are quite decent, but implementation with the help of the Maidan ...

In general, Seattle with blacks and African-Americans (this turns out to be different people), led by an Indo-American (well, born in India), is still waiting for a lot of interesting and unusual. 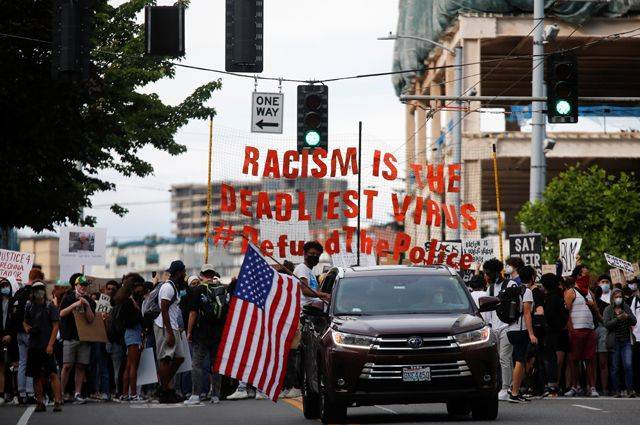 Interestingly, will they also ride? And what to shout at the same time? Curious to death.

But no less curious is the fact that a bad example, as you know (and a particularly well-planned bad example), is contagious. Especially in the performance of the poor, miserable, humiliated and insulted African-Americans, whose ancestors were enslaved ... 150 years ago.

For sure, these vindictive African-Americans. I’m not that for forgetting and forgiving, no. You need to remember. But 150 years is enough time to stop moaning about slavery and start doing normal business. And do not cry and sell drugs. To rob, set fire and everything else, which is so famous for the descendants of slaves.

But maidan something more interesting than working. It is proved by Ukrainians. And what makes African Americans worse? Yes, nothing. 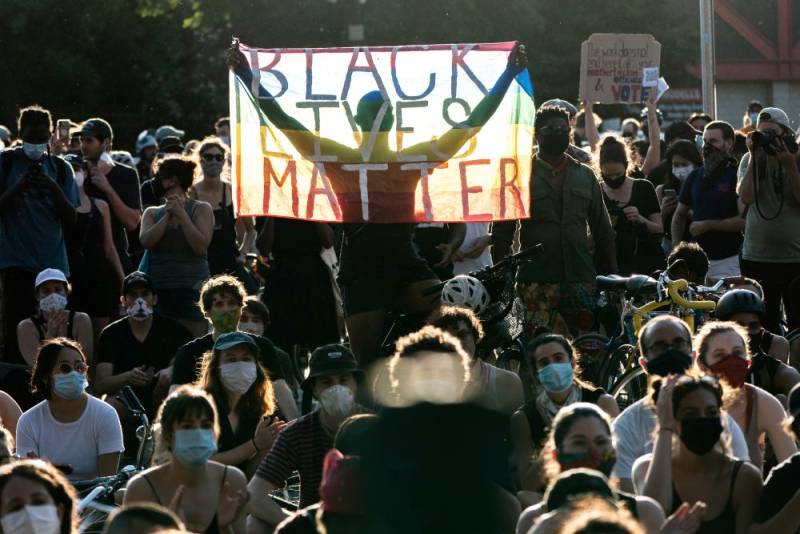 Further, an argument will go which may seem to some people a fantastic utopia, but do not rush to get air into your lungs.

The fact that the whole ameromaidan is completely man-made, I hope no one will object? Moreover, it’s true that it looks like Kiev ... Let's see how Trump does not look like Yanukovych ... 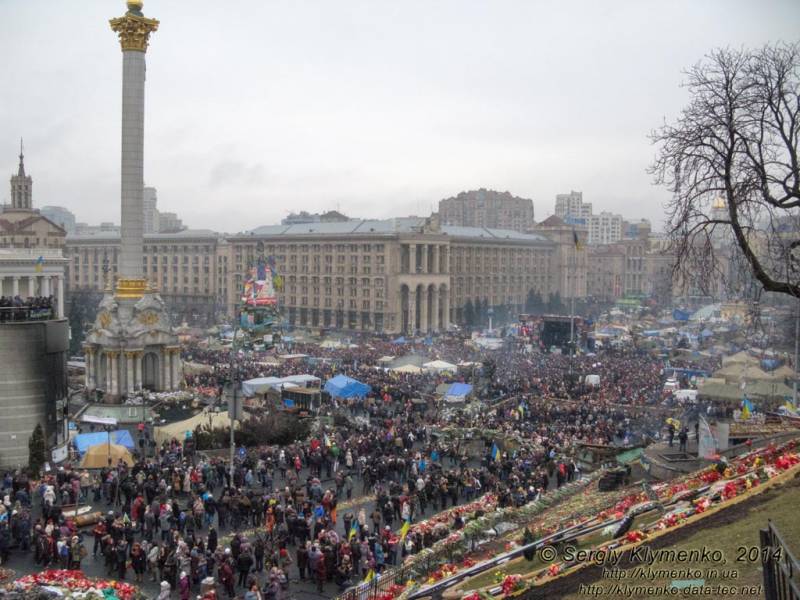 However, the Maidan process is running. In general, the Maidan is such a thing, complicated. And hard to manage. And it can lead not only to a general overhaul, but also to a total hell. Again with reference to Ukraine.

I talked with my Ukrainian friends, they just laugh. Comments in one vein: we will now be brothers in mind, for scripts are written with one hand and invented with one head. That's only in Ukraine there are no blacks, so everything a little bit wrong. 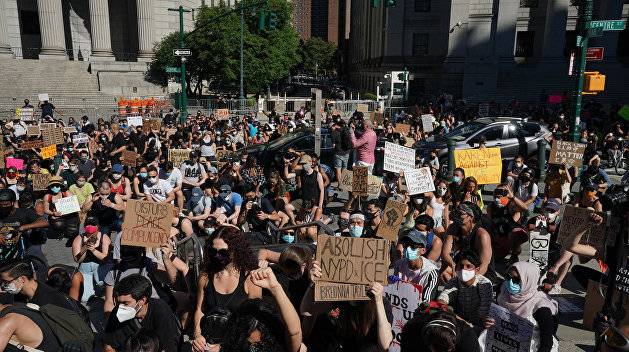 Although there is still need to figure out who was more active, Ukrainian Maydown or his black brother on the American Maidan.

However, the question arises (eternal): who benefits? To whom it was beneficial in Ukraine, we now know who benefits from the United States dumping Trump, it is not entirely clear yet, but if somewhere ... tires turn on, then this is very necessary for someone.

They could not impeach - now, through popular anger, we must try. Model in Ukraine tested, why pull? So it started.

However, in every Ukraine there is its own Crimea, if that. And such bouts very often end in something unpleasant such. Losses. And here the main thing is to start acting in time, because then it will be too late to chew on the elbows and scream that the evil men have taken something there.

In general, in the case of the United States, everything can be very interesting in fact. Mythical occupation will not be required, the Russians will not come, alas, but the Americans can easily cope on their own. This country is too strong when everything is good inside, and too weak when something goes wrong.

So if the United States falls apart, then only from the inside. But this is both difficult and simple, since the re-democratization in the country is not just great, but comes to senility.

Flirting with African-Americans alone is worth something. And they can cost precisely the loss of part of the states, mainly in the south. Everything can start just like that, because Maidan is a cool and fun affair, but everyone wants to eat it all the time. This means that the period of dancing and racing will be followed by a period for which we must begin to take and divide.

And it doesn’t matter what to take and share. Money, supermarket chains, mines, oil wells or the territories in which all this is located. Wholesale, by the way, is more profitable.

The main thing is not to forget to make repentance on the knees of those who will take away all this. Well, it is clear that those who do not have time to escape. These whites, who from 1619 to 1865 in every possible way destroyed the ancestors of modern African-Americans in slavery.

In general, the script is known, tested and tested.

Moreover, there are those in the States who are ready to lead the opposition, and not drawn, but really existing. Anyone interested can look at the political platform of Comrade Savant. There are some very interesting thoughts borrowed from the Marxist movement. Especially about the nationalization of large enterprises. 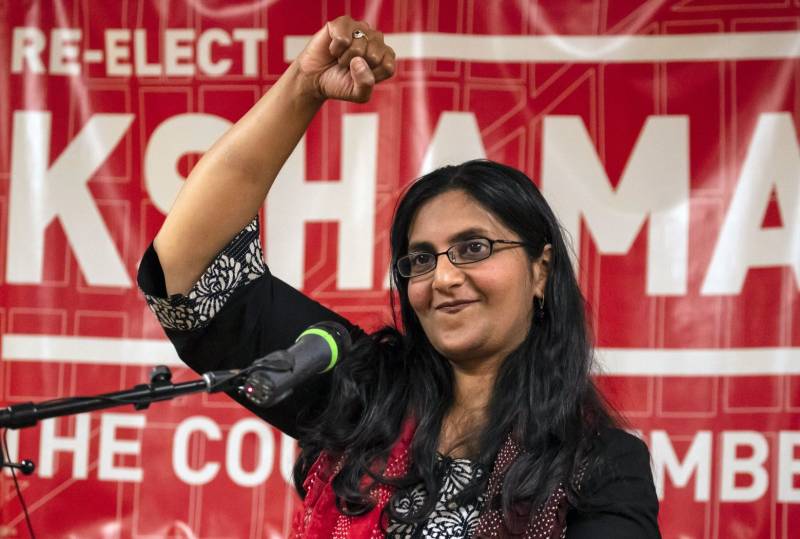 But what the socialist Kshama Savant can guide is half the trouble. Or not trouble. The second half is that after the races you want what? That's right, independence! And all kinds of federalization movements begin, as a result, the islands sail away, one part of the country wants the West, the second and the East everything is fine, and so on.

And why not African-Americans to expand the idea of ​​the “People's Republic of Capitoline Hill”, which has already united the Trotskyists, anarchists, members of small extreme left groups, LGBT activists, vegans, and many others, into a full-fledged education? Unrecognized South American states?

Or recognized. If in reality there will be many of these LGBT people, then at the peak of tolerance, the world community will definitely recognize.

Can you imagine if such a republic really appears in the south of the USA? Or a confederation?

The numbers of this action will be very informative.

The number of prisoners in prisons will hypothetically decrease by 48%, but actually increase, because they still have to sit somewhere.

It is worth recalling the sad fate of the Republic of South Africa, a sort of African pearl in terms of development. And yes, apartheid had a place to be there. But there was growth. And when the end of apartheid (we approve) and the oppression of the white population began, then with growth, as it were, everything was not so beautiful. Although 33rd in the world in terms of GDP (IMF data) is the best indicator in Africa.

What happens in other African countries can be imagined as a horror movie at night. Because Algeria is the second in the UN ranking (52nd in the world), and Angola is third (57th).

In general, so-so governed in Africa. And it is unlikely that it will be just as effective in the American neoplasm, because it is one thing to take and share, and it is completely another to create and multiply.

This, judging by statistics, is not for African Americans. But why not give it a try? 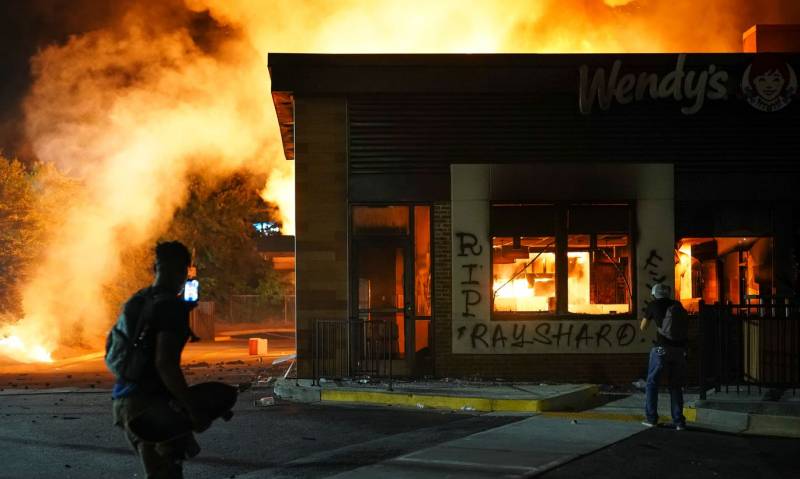 By the way, judging by the latest census of the United States, African Americans and blacks make up 13,1% of the population. In general, a decent figure.

But what about the Latin American part, which is 16,7% and also wants to live fun and cool? Although Hispanics are much quieter than African Americans.

However, looking at all this disgrace, they will also be able to want. And you get the same USA, but divided by race. Black, dark and white.

A kind of tricolor. But it may well end like this. Maidan, you know, is a thin thing ... 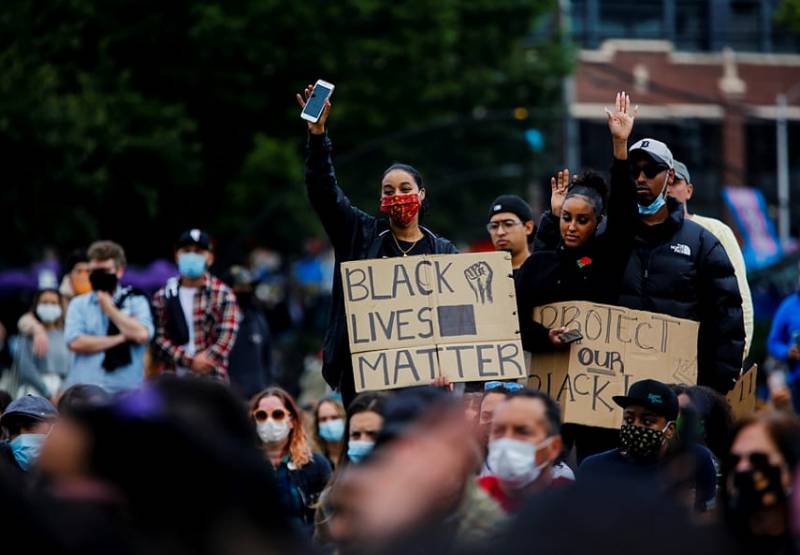 Of course, it is unlikely that anyone in the world will be very keen on the fact that in the United States the devil will begin to know what is racially based. And more than that, whatever the occasion, if the United States begins to lose its position in the world, whatever it may be, external or internal, they will basically be button accordion to tear about this.

Yes, some countries that work very closely with the United States and whose welfare and (especially) security depend on the global guardian of democracy will have a very difficult time.

But I'm sorry, these are the rules of the Maidan.

Ctrl Enter
Noticed oshЫbku Highlight text and press. Ctrl + Enter
We are
The tragedy of the American army ("The Atlantic", USA)Bashar al-Assad: In Syria, not the “revolution” that the enemies are talking about, but the revolution of the army and the people against terrorists
Military Reviewin Yandex News
Military Reviewin Google News
105 comments
Information
Dear reader, to leave comments on the publication, you must to register.