I wish I could look into the eyes of my great-great-grandfather! 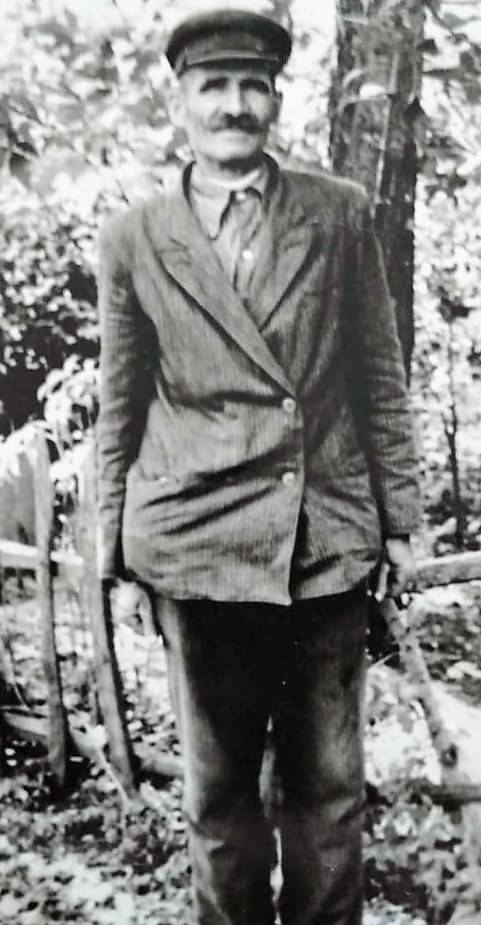 Where does our memory go?

I think that every family of our time, when the Soviet Union is a distant past, still has relatives who fought or were somehow involved in those terrible times of the war. Our family is not an exception, but we have very little information and information about my great-great-grandfather - Vasily Skrypnik, about a man who died more than thirty years ago.

Yes, over the past years, somehow it was not possible to save too much about a loved one, whom everyone today calls beautiful, and we hardly know how he fought. Unfortunately, there is not a single front-line story from great-great-grandfather in family legends, but at least front-line photographs have been preserved.

Now published data from archives, documents and essays about the units and formations in which our ancestors served in those years came to the rescue. However, even on very capacious sites, “The Feat of the People” and “Memory of the People”, my great-great-grandfather is only informed about the awarding of the Order of the Patriotic War of the II degree to the 40th anniversary of the Great Victory. 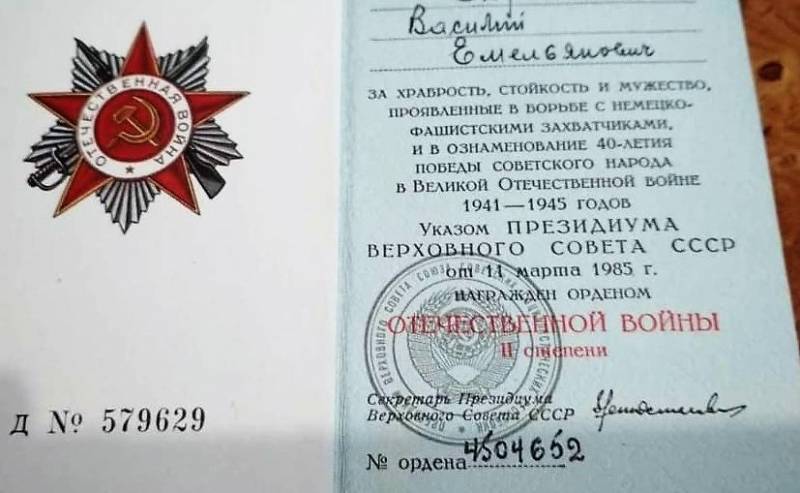 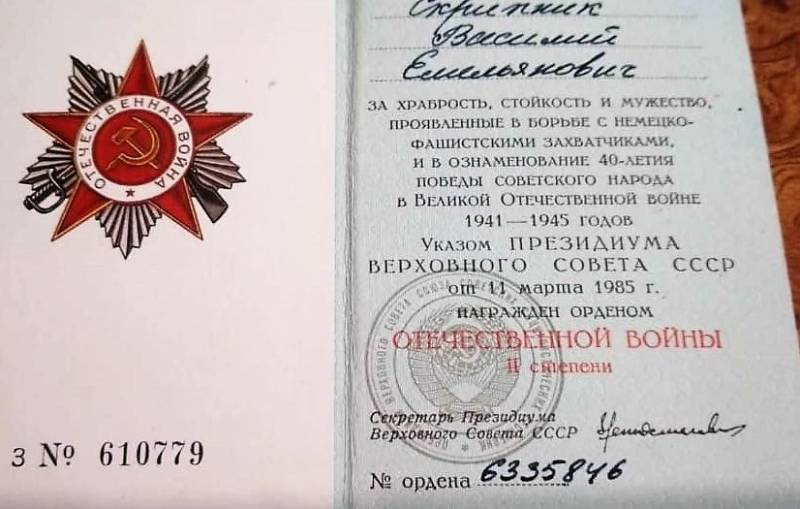 Later, Vasily Emelyanovich received another such order, and also medals remained from him, including “60 years of the Armed Forces of the USSR”. But still there still remains a memory that has been passed down from generation to generation, but this is the memory of the great-great-grandfather himself, of how he became after the war, how he had already lived a peaceful life. 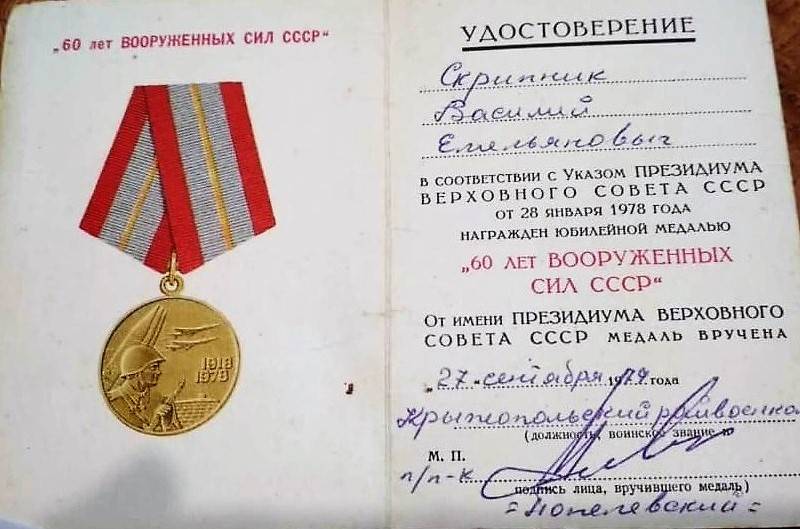 It is unlikely that any of us is not proud of our grandfather or grandmother, who fought or just helped to fight in the rear during the war. It seems to me that those who, by the will of fate, were captured or managed to survive in the occupation, are worthy of respect. You should never forget about it and you always need to say thanks to all these people, as long as there is an opportunity.

Only one person fought in our family, my great-great-grandfather Skrypnik Vasily Emelyanovich. There is very little information about him, only photographs and a few medals remain, and everything else was transmitted only from the lips of relatives.

Vasily was born on January 14, 1904 in the village of Dzhugastra, Kryzhopolsky district, Vinnitsa region of the Ukrainian SSR. He went through the entire Great Patriotic War, however, even according to archival data, we still could not find out in which unit and compound he served.

In the pre-war era, the great-great-grandfather lived in the village and, of course, was engaged in agriculture, he probably had the childhood of an ordinary rural boy, although he had to revolution and civil war. Now hardly anyone will tell how the great-great-grandfather survived collectivization and whether he served in his youth in the Red Army. But even before the war, he managed to get married, and they had three children with my great-great-grandmother, two daughters, Anya and Natalya, and one son - Arseny.

When fascist Germany attacked the USSR, Vasily Emelyanovich was called to the front. This happened in the summer of 1941 by mobilization. He fought on the South, and then on the Stepnoy and 2nd Ukrainian Front, which was formed on October 20, 1943. It is unlikely that my great-great-grandfather fought on the front lines: after mobilization he was already under 40. Unfortunately, almost no information was left in the family about where and how Private Vasily Skrypnik served. 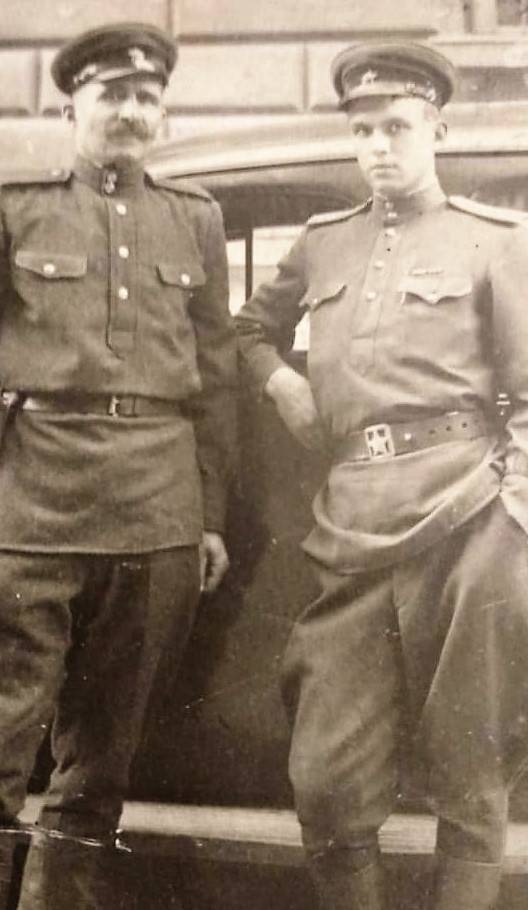 Most likely, he had to experience the hardships of the retreat of 1941 and 1942, and the most terrible battles with the enemy, and he ended the war somewhere in Hungary or Austria, where in the spring of 1945 the troops of the 2nd Ukrainian Front led by Marshal R. Malinovsky. It seems that he did not tell any of his exploits to any of those who still remember him. The family knew that the great-great-grandfather was very quick-witted and not too talkative. 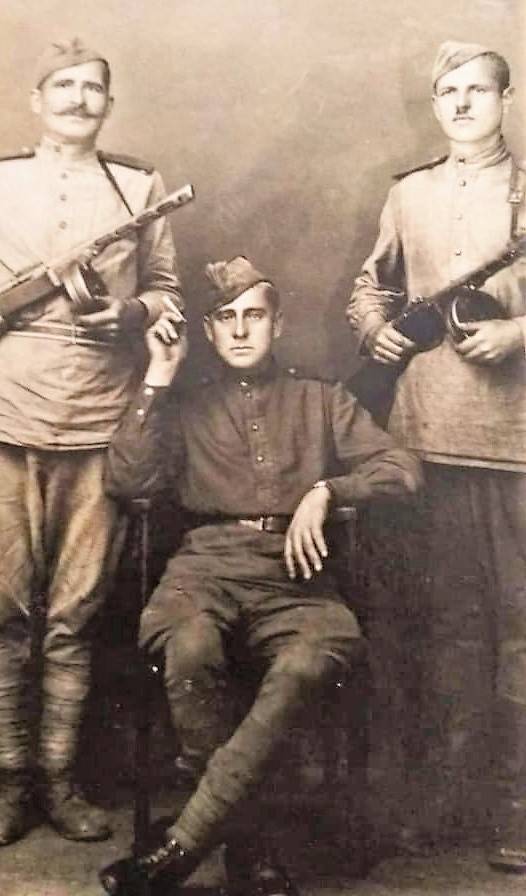 But I know for sure that the great-great-grandfather was in those battles when the troops of the 2nd Ukrainian Front, then commanded by Marshal Konev, crossed the Dnieper in late autumn 1943. They conducted the Pyatikhat and Znamensky operations to expand the bridgehead and subsequently reached Kirovohrad and Krivoy Rog. The battles at Krivoy Rog were very difficult, as well as the multi-day battles for Znamenka.

However, the front managed to break the enemy’s resistance and take its starting position beyond the Dnieper for a subsequent offensive on the right-bank Ukraine. In the spring of 1944, the troops of the 2nd Ukrainian Front carried out a series of operations, which eventually forced Romania to surrender and join the ranks of the allied forces in the war against Nazi Germany. 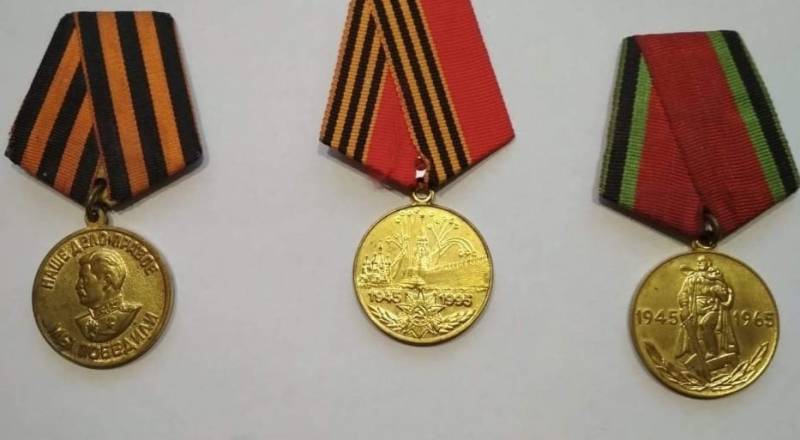 What did the war teach him

After the war, the family of Grandfather Vasily lived there: in the Vinnitsa region, Kryzhopolsky district, in the village of Dzhugastra. Vasily was engaged in beekeeping and transported honey throughout the village. His youngest daughter Anya died during the Nazi attack on the village, she hid from the invaders in a barrel of water, and subsequently died from severe pneumonia.

Son Arseny after the war and until the end of his life was the chairman of the collective farm. Daughter Natalia, my great-grandmother, moved to Chisinau, the capital of Soviet Moldova, where she worked as a telegraphist, where she married and gave birth to two children: Sergey and Galina. Natalya’s daughter, grandmother Galya, subsequently gave birth to Alexandra, my future mother, and her sister Tatyana. Already in old age, Vasily Emelyanovich also moved to Chisinau to Natalia, where in 1987 he died a deep old man in his apartment.

My mother tells about my great-great-grandfather, his great-grandfather, that he was very kind, that the war taught him to value first of all the family, which he was very afraid to lose. Despite the war and hardships, he, according to my mother, was always vigorous in body and spirit, even in his advanced years. Mom happily recalls the moments when her great-grandfather, whom everyone called simply Vasily's grandfather, gave them "denyuzhki" for chewing gum and, as always, he loved to talk with his grandchildren. 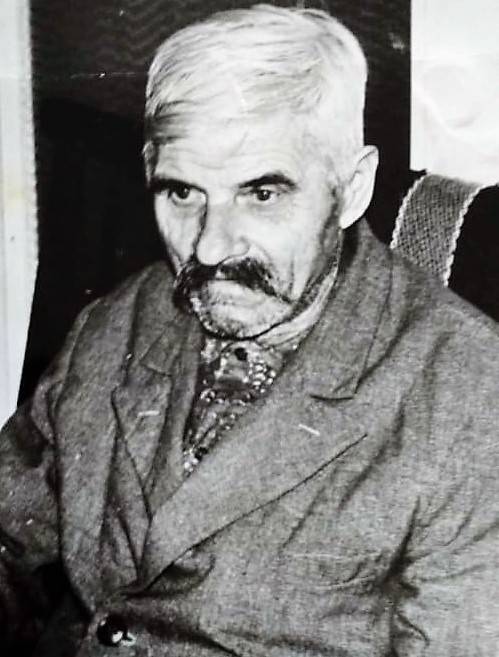 Now it’s very unfortunate that there is so little information left, some information about such an interesting person as my great-great-grandfather. A lot was lost or it was simply destroyed by the war and time, and only fragmentary memories, as well as the orders and medals of my great-great-grandfather let me realize and understand that the war affected the lives of all people of that time.

It seems to me that no one will be surprised that my thoughts about my great-great-grandfather are very bright, and I am very proud and happy that his blood flows in me. And I have no doubt - I know for sure that he was ready to give his life for his homeland and for his family! I’m scared to imagine how my great-great-grandfather felt at the time of the battles, whether he was scared or was sure that nothing would happen to him.

I probably will never know this, but I know for sure that we must remember such people, because their lives make it clear that the main thing in our life is the homeland and the family! It is sad to understand that we are probably the last generation of those who can still see with our own eyes the veterans of the Great Patriotic War and learn directly from them something about the war. And just tell them, “Thank you!”

They defended their homeland, fought for us, wanted us to be happy and not think about such a terrible phenomenon as war. It’s very scary to realize that people don’t understand it now. In today's world, the situation is tense, which, with the wrong actions or just conversations of politicians, can lead the world to a new war.

Author:
Daniil Petrov, a student of the hydrogeological faculty of the Moscow Polytechnic Institute S. Ordzhonikidze
Photos used:
from the family archive

Ctrl Enter
Noticed oshЫbku Highlight text and press. Ctrl + Enter
We are
What is fascism for a victorious nation?Sights that hurt the soul
Military Reviewin Yandex News
Military Reviewin Google News
30 comments
Information
Dear reader, to leave comments on the publication, you must to register.