How the British captured the Fokke-Wulf-190 fighter 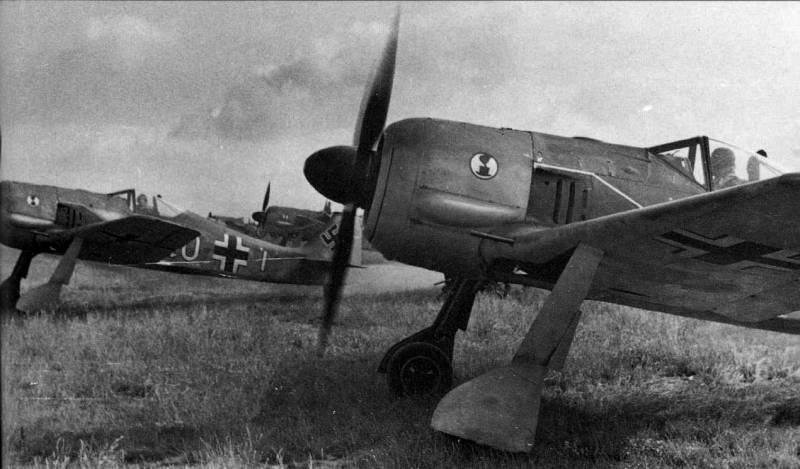 Many experts rightly consider the Focke-Wulf Fw-190 single-engine fighter to be the best German fighter during the Second World War. The famous Me-109 was a more massive machine, but the Messer was inferior in many respects to the Fw-190, which could be used at the front in a variety of roles. In addition to the fighter itself, the Fokke-Wulfs-190 was actively used by the Germans as interceptors, night fighters, attack aircraft and escort fighters. In many ways, this fighting vehicle became the real "workhorse" of the Luftwaffe, especially at the final stage of the war.

Features of the best German fighter of World War II

The Fokke-Wulf-190 fighter began to be actively operated in August 1941, while over the entire production period in Germany more than 20 thousand Fw-190 fighters in various modifications were produced. According to established tradition, Focke-Wulf engineers gave their aircraft additional bird names, for example, the Fw-190 became known as “Würger” (“Shrike”; shrike is a small bird of prey).

The development of a new fighter in Germany began in the fall of 1937. The use of the new combat vehicle was planned in conjunction with the Messerschmitt Bf.109 fighter. Focke-Wulf also took part in the competition for the creation of a new aircraft. A team of designers led by Kurt led the work on creating a new machine. Tank. All tank fighter variants were equipped with air-cooled engines. At the same time, special interest in projects by the Imperial Ministry aviation there was not until the appearance of the aircraft with the new 12-cylinder 1550-horsepower air-cooled engine BMW-139. The installation of a powerful engine on a plane promised great dividends in the form of an increase in flight performance.

The first flight of the new fighter took place before the start of World War II. The first Fw-190 took to the sky on July 1, 1939. In the first flight, the new combat vehicle demonstrated its capabilities by developing a speed of 595 km / h, which was 30 km / h faster than the maximum speed of the Messerschmitt models already in production. The flight characteristics of the Fw-190 were at their best. Test pilots noted a good view from the cockpit to the sides and back, excellent controllability at all flight speeds, as well as high speed. Also, the advantage was the wide-placed chassis, which simplified the take-off / landing procedure for pilots. In this regard, the fighter was safer than its direct competitor Messerschmitt Bf.109. 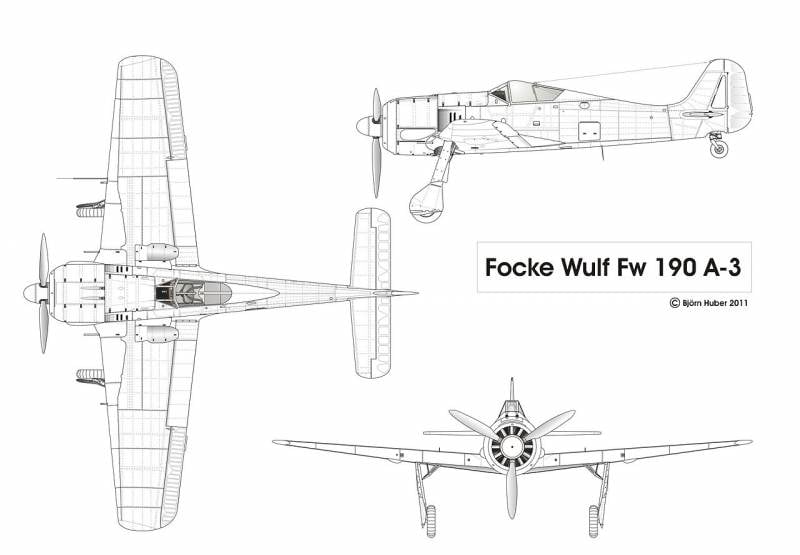 Over time, the aircraft was continuously improved, receiving new more powerful engines, along with which its speed grew, as well as various configurations of weapons. At the same time, the first series of fighters were armed with two automatic cannons and machine guns. Over time, the number of 20-mm automatic guns grew to four, and two large-caliber 13-mm machine guns supplemented the weight of the side salvo. Even multi-engine allied bombers could not withstand such a flurry of fire.

It was distinguished by the Fw-190 and increased survivability, which later made it possible to widely use an aircraft with powerful artillery weapons as an attack aircraft and a fighter-bomber. This was primarily achieved through the use of an air-cooled engine, which could withstand a large number of hits and reliably protected the pilot from fire from the front hemisphere. The second important feature of the fighter was the fuel tanks, which the designers installed only in the fuselage. This was an important decision, because when fired from the ground, a large number of shells and bullets hit the wing, which has a large area. Therefore, the probability of hitting the fuselage tanks is less than that of the wing, and getting into the Fokke-Wulf wing did not lead to a fuel leak or fire.

The very first acquaintance of the British with the new German fighter made a painful impression on the Allies. The full combat debut of the Fw-190 took place on the Western Front. Aircraft appeared in France in the summer of 1941. On August 14 of the same year, the first British Spitfire was shot down by a Focke-Wulf Fw-190 fighter. For several months, the British military believed that they had encountered the Curtiss P-36 Hawk aircraft captured by the Germans, which the United States managed to deliver to France.

However, it soon became clear that the new fighter with a star-shaped engine, which increasingly took part in air battles, is a new German aircraft, and not a Luftwaffe trophy. At the same time, the veil finally fell off the eyes of the English pilots when they realized that the new air enemy in all respects, except for the radius of the bend, was superior to the Royal Air Force’s most advanced fighter “Supermarine Spitfire Mk V” at that time. Sky superiority over the English Channel again passed to Germany. 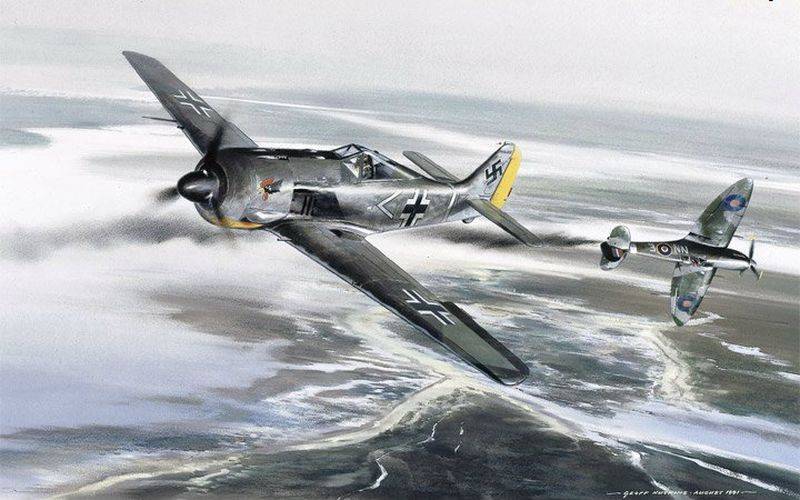 The two major successes of the Fw-190 fighters on the Western Front were Operation Cerberus and the reflection of the Allied landings in the Dieppe area in February and August 1942, respectively. The first operation involved the deployment of large German surface ships from Brest to the naval bases of Germany and took place on February 11-13, 1942. Under the nose of the Royal fleet the Germans returned to Germany the battleships Scharnhorst and Gneisenau, as well as the heavy cruiser Prince Eugen. Ensuring the passage of ships through the English Channel, German aviation initially reported on 43 allied aircraft shot down, later increasing the number of downed aircraft to 60 units: fighters, bombers, torpedo bombers. At the same time, the Luftwaffe lost only 17 aircraft and 11 pilots, including only two Fw-190 fighters. It is noteworthy that most of the lost German fighters crashed while landing in bad weather.

The second major success of the Fokke-Wulfs came in August 1942. Reflecting the Allied landing in the Dieppe area, fighters from the 2nd and 26th squadrons, which then had 115 combat aircraft (mainly FW-190A-3), carried out successful battles against the Allied aviation group of about 300 aircraft, mainly Spitfire Mk V fighters. Both squadrons lost about 25 aircraft in battle, claiming 106 victories, including 88 Spitfires shot down. In the battles in the Dieppe region, the Allies lost 81 pilots killed and captured, the Germans only 14 pilots.

This state of affairs did not suit the command of the British Air Force. Among other things, even the option of conducting a special operation to hijack one FW-190 fighter from French airfields for the subsequent comprehensive study of a combat vehicle was considered. However, as often happens, His Majesty's case intervened in the situation. The plane, which the British were ready to hunt with the commandos, flew to the UK safe and sound. The British took possession of the fully operational FW-190A-3 at the end of June 1942.

While the Royal Air Force was seriously considering the various possibilities of getting a new German fighter in its hands for a comprehensive study and study of the aircraft, the case intervened. On June 23, 1942, Luftwaffe Chief Lieutenant Armin Faber from the 2nd Richtofen Fighter Squadron, which was based in the Breton Morla, took to the sky as part of the 7th Squadron. German fighters flew to intercept the Boston bombers, escorted by Spitfire fighters, which were controlled by Czechoslovak pilots. In the ensuing aerial battle, the FW-190 fighters again proved their superiority. Although the Germans were unable to get to the bombers, they were able to shoot down 7 Allied fighters at the cost of losing two cars. 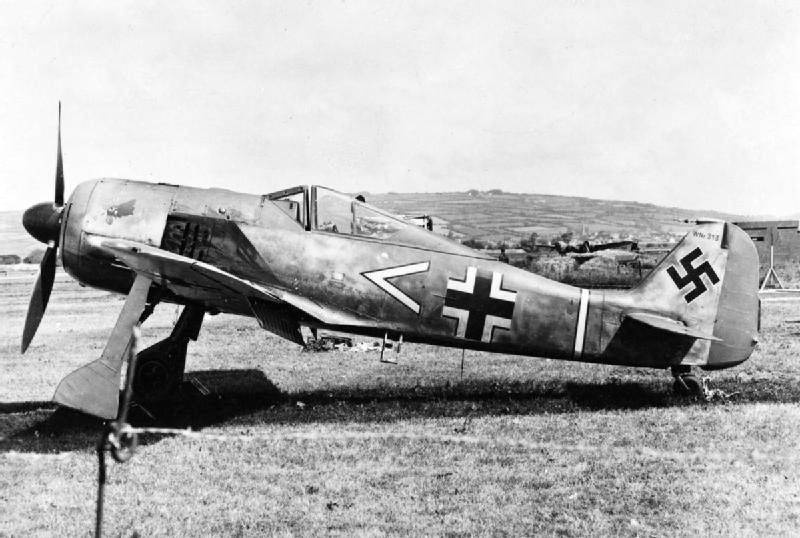 The same FW-190 A-3, which the British accidentally got in June 1942
During the battle, which took place over the English Channel, Lieutenant Faber lost his link when he was detached from the Allied fighters, and incorrectly determined his own location. During the reconnaissance, the pilot mixed up the direction and flew north instead of south. At the same time, Faber took Bristol Bay for the English Channel. Having quietly flown over the Bristol Bay, Lieutenant Faber landed at the first airport that turned up. At this time, the pilot was still confident that he had sat down somewhere in France. In fact, Armin Faber landed at the Royal Air Force base in South Wales.

So, by a lucky coincidence, a completely whole and operational FW-190 A-3 fighter fell into the hands of the British. It was the first Focke-Wulf-190 that the Allies managed to capture. Amin Faber was captured, and his fighter was the subject of a comprehensive study. Royal Air Force specialists studied in detail the new German aircraft in order to identify the existing strengths and weaknesses. Subsequently, the information received was used by the British command to develop recommendations and methodology for conducting air battles against this German fighter. At the same time, both Faber and his plane survived the war. Today, parts of the same Focke-Wulf FW-190 A-3 are still stored in the UK at the Shoreham Aviation Museum.

Ctrl Enter
Noticed oshЫbku Highlight text and press. Ctrl + Enter
We are
352 shot down as a way to defeatMyths of the Great Patriotic. Papier mache helmet
Military Reviewin Yandex News
Military Reviewin Google News
89 comments
Information
Dear reader, to leave comments on the publication, you must sign in.