On the ruins of Yugoslavia. Alien Tito's heirs 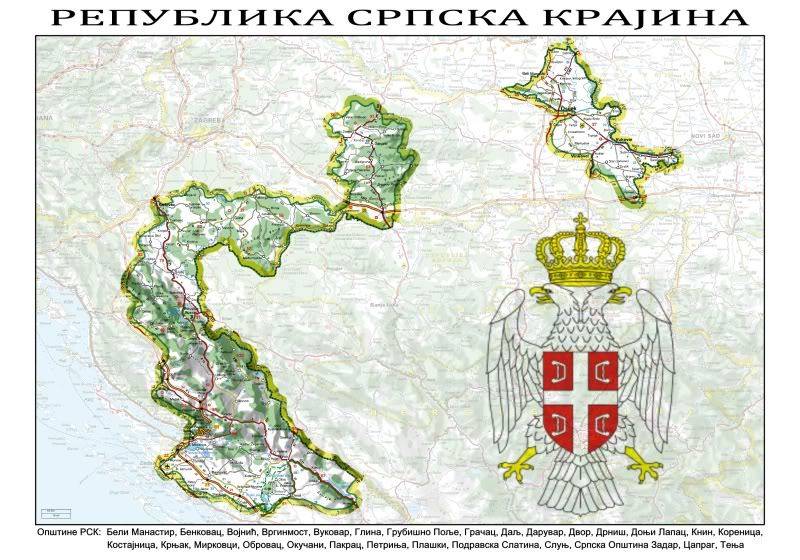 They betrayed on time

In 1981, just a year after the death of Josip Broz Tito, a book by the not-so-well-known Croatian dissident was published in New York. It was the work of the disgraced ex-director of the Zagreb Institute stories the working-class movement of Franjo Tudjman's Nationalism in Modern Europe, in which there seemed to be nothing essentially new. However, it concluded that it was extremely important for the West that was aiming for the collapse of Yugoslavia:

"The position of the Republic of Croatia in Yugoslavia is comparable to the position of India during the period of British colonial rule."
Catholic, although at that time still socialist Croatia and the Muslims of Bosnia and Herzegovina went to the direct split of a unified Yugoslavia in the first half of the 1990s. And first, Zagreb and Sarajevo, feeling the guarantees of their own impunity, agreed on mutual borders.

But already in June-August 1995, they together de facto liquidated the Serbian republic of Krajina. Serbian Krajina, created in response to Croatia’s desire to leave the SFRY, was located in southwestern Croatia. It had the capital of the 12 thousandth Knin and bordered on Bosnia and Herzegovina, and existed for less than four years.

The reprisals against the Serbs who wished to remain in Croatia were infinitely cruel. As a result of the occupation of Krajina, which was directly supported by NATO, up to 250 thousand Serbs fled from Croatia, and the minimum number of victims of the Serb massacre is now estimated at four thousand people. According to the Veritas organization, which unites Krajina Serbs in exile, the number of dead and missing civilians in Krajina in August 1995 alone amounted to at least 1042 people.

The unprecedented Croatian pressure is not difficult to explain. As early as November 15, 1994, the United States and Croatia concluded an indefinite agreement on military cooperation. According to the then Minister of Foreign Affairs of Croatia, Mate Granich, the United States, within the framework of the treaty, advised the Croatian army on the issue of an attack on Krajina. At the same time, up to 60 military advisers from the American private military company MPRI participated in the training of Croatian special units and guard brigades.

The victory over Serbian Krajina was immediately welcomed by Germany. The representative of the German embassy in Zagreb, K. Ender, shortly after the liquidation of Krajina, stated on Zagreb radio:

“Germany shares the joy of military success with you and praises you for this war. Even the analysts who know more than me could not have foreseen such a quick and magnificent action. ”
A few years later, the leaders of Croatia were ready to go further. At the beginning of the 2000s, provocations on the Croatian-Slovenian border sharply increased, and in Slovenia the proclamations "Slovenia is Croatia!" The claims of Croatian nationalists apply not only to the Slovenian Koper (formerly Kapdistrias), Piran and Portoroz, but also ... to the Italian Trieste (Tristia).

It is characteristic that, at the same time, some “experts” in Croatia continue to periodically advocate to deprive Bosnia and Herzegovina of even a microscopic exit to the Adriatic near the town of Neum. The basis of such requirements says that this exit "geographically breaks the territorial unity of Croatia." 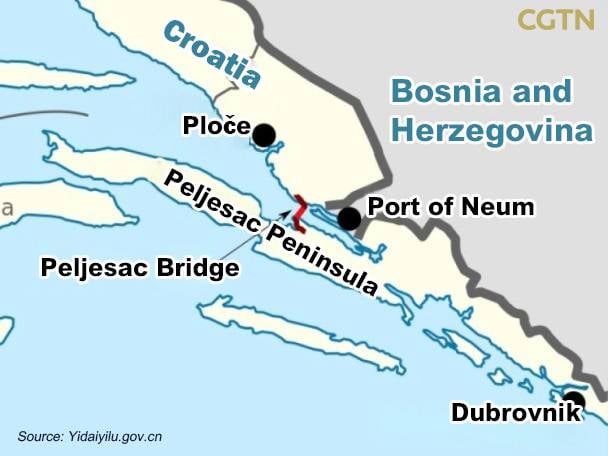 In this regard, it should be recalled that in 1946, in unified Yugoslavia, the Croatian authorities lobbied for the construction of the port of Ploce in the extreme south-east of Croatia, near its coastal border with Bosnia. This was necessary to strengthen the presence of Croatia in the South Adriatic. The port was built by 1952, but the authorities of Bosnia and Herzegovina insisted on its transfer to this republic, due to its miniature access to the Adriatic at the resort town of Neum.

However, Zagreb persisted, and in Belgrade did not dare to aggravate relations with the Croats. In the mid-60s, a railway was built from Sarajevo to Ploce, which facilitated the foreign trade relations of Bosnia and Herzegovina, although under the transit control of Croatia. Bosnia and Herzegovina still enjoys duty-free transit through Ploce, but “public” campaigns are periodically carried out in the republic for not recognizing the borders with Croatia near Jadran.

We can say that the ideological founder, and soon the military-political leader of Croatian separatism was precisely Franjo Tudjman. A loyal communist for almost a quarter century with a truly detective biography. Already in April 1944, 22-year-old Tujman became commander of the communist partisan brigade in the Liberation Army of I. B. Tito. In 1953, the hero of the struggle for freedom became a colonel, and in 1959, a major general. He served in the General Staff of the JNA.

In 1961, a sharp turn occurred in the career of a military officer Tudjman: he became director of the Zagreb Institute for the History of the Labor Movement. Moreover: he was allowed to give lectures in the USA, Canada, Italy, Austria. In all likelihood, the general experienced dizziness, not uncommon in such cases, from success. Tudjman defended his doctoral dissertation in Zagreb on the crisis of monarchist Yugoslavia, but was soon caught by outright plagiarism.

He was expelled from the Communist Party, dismissed from the institute and demoted. Soon, the failed scientist founded an underground nationalist group in Zagreb, which quickly established contacts with Muslim extremists in Bosnia. At that time they were already headed by the notorious Aliya Izetbegovich. 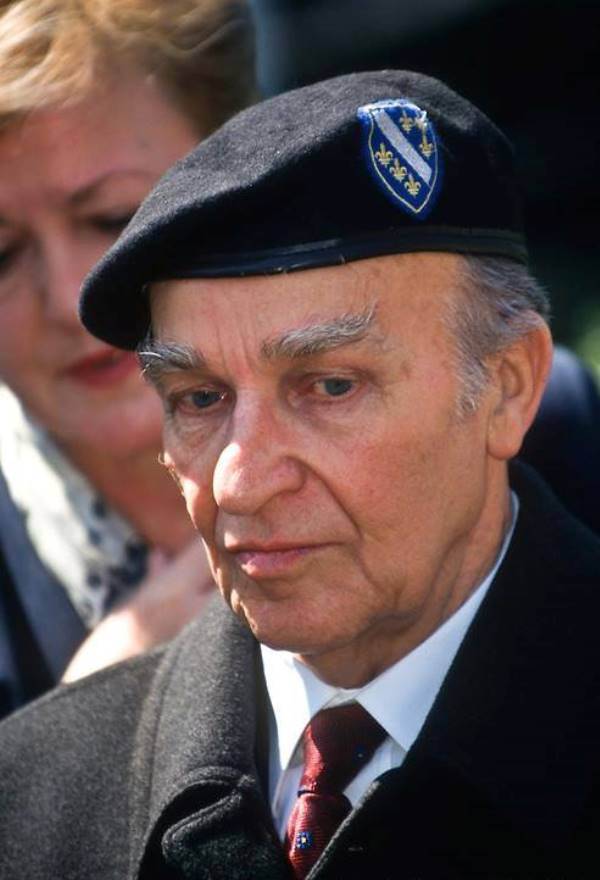 Alia Izetbegovic - both Bosnian President and bin Laden's friend
The career of this Muslim underground has developed in parallel with the Croatian dissident. He was also a notable publicist and back in 1970 illegally published in Bosnia and Herzegovina, as well as in Serbian Kosovo, his already famous, and for many terrorists, desktop “Islamic Declaration”.

In it, Izetbegovich very convincingly, even fanatically argued,

“There can be neither peace nor coexistence between the Islamic faith and non-Islamic political institutions of power. Our path does not begin with the seizure of power, but with the conquest of people. ”
For this work, he received his 1975 years in prison in 14. In 1989, having been released, Aliya Izetbegovic led the anti-Serb campaign of the Bosnian chauvinists, who became allies of Croatian like-minded and Kosovar extremists. Later, in spite of the high posts held by Izetbegovic (he became president of Bosnia and Herzegovina back in 1990), he was not called a man who drowned Bosnia in blood.

Meanwhile, Franjo Tudjman, like many dissidents, can be said to be “lucky” to be imprisoned. He became one of the "martyrs of conscience" on charges of supporting nationalism and sat down even twice - in 1972 and 1981. Moreover, in 1972, Tudjman was first sentenced to two years, but was released after nine months.

Soon, the newly-minted Croatian dissident joined the campaign of Western and emigrant media about the unviability of a unified Yugoslavia. His second prison term (already three years) generally happened very on time - one by one the communist leaders left, everything went to discharge, and already in September 1984 was again released ahead of schedule, having served only 17 months. 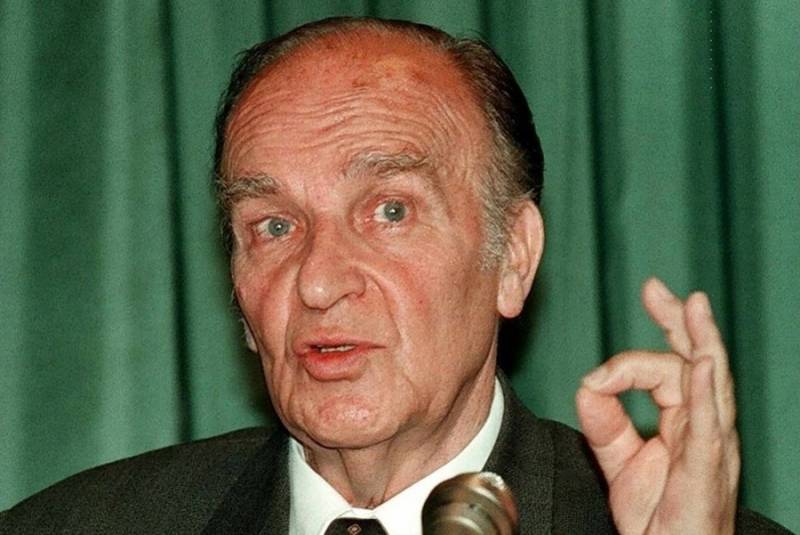 At the same time, Aliya Izetbegovich actively searched for and found allies, among whom was the notorious leader of Al-Qaeda (banned in the Russian Federation) Osama bin Laden. Here are the data published in Sarajevo "Independent News"dated May 2, 2011:

Chevalier of a foreign order

Let us return, however, to the person of F. Tudjman. In June 1987, the Yugoslav authorities allowed him and his family to leave for Canada. There and in the United States, he lectured on the Croatian desire for independence, the unenviable prospect of the SFRY, and on the "exaggeration" of accusations by Croatian Ustas in their repression against the Serbs during the Second World War.

Not without the help of the West and the Vatican, Tujman associates established in 1990 the “Christian Democratic Union of Croatia”. He repeatedly stated that Croatia during the Second World War was not only a Nazi entity, "how many expressed the thousand-year-old aspirations of the Croatian people for independence."

Apparently, the new vaccination of nationalism for the Croats was very strong. Franjo Tudjman was elected President of Croatia in 1990, 1994 and 1997, and always with a large margin of vote. He became the Marshal of Croatia immediately after the bloody destruction of the Republika Srpska Republic in 1995. 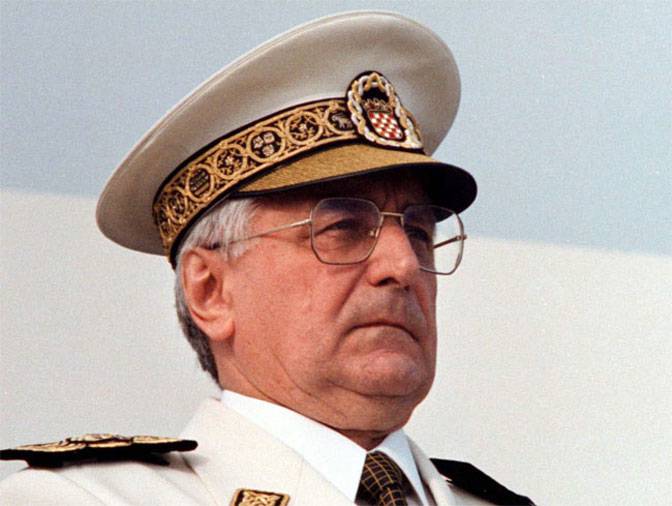 Marshal Tudjman considered himself the true heir to Marshal Tito
However, an attempt to amend the criminal law of Croatia criminalizing “praising fascist, nationalist and other totalitarian ideologies or promoting racism and xenophobia” was nevertheless made in 2003. Although the amendment was adopted by the Croatian Parliament (Croatian Sabor), The Constitutional Court of the Russian Federation rejected it by its decision of November 27, 2003.

In its conclusion (February 2018), the Council for Studying the Consequences of the Government of Undemocratic Regimes under the Government of the Population of the Peoples Republic equated the Ustashev regime in Croatia with the socialist system of the former Yugoslavia. And since February 1992, the pro-Nazi “Croatian Liberation Movement”, founded in Argentina in 1956 by the former collaborator and dictator of the “NGH” A. Pavelich, has been operating in the country without restrictions. Escaped from Yugoslavia in 1945, not without the help of the Vatican.

According to the report of the Ministry of Foreign Affairs of the Russian Federation “On the situation with the glorification of Nazism and the spread of neo-Nazism” dated May 6, 2019, there are regular acts of vandalism in Croatia against memorials to Yugoslav partisans and monuments in their burial places. Only for 1991-2000. 2964 such objects were destroyed in the country. It was also noted that the mass media of the country are heroizing the Ustashi and their allies, and representatives of the Catholic Church are participating in these campaigns.

However, soon after the reprisal against Serbian Krajina, Franjo Tudjman was awarded ... a Russian medal named after Marshal Zhukov. This award was solemnly presented to the Croatian politician on November 5, 1996 at the Russian Embassy in Zagreb. With the wording “For an active contribution to the Victory over fascism and on the occasion of the centenary of the birth of Marshal Zhukov.”

Ctrl Enter
Noticed oshЫbku Highlight text and press. Ctrl + Enter
We are
How Bosnia and Herzegovina became independentDay of the Republic of Serbian Army. A memorable date for the Bosnian Serbs
Military Reviewin Yandex News
Military Reviewin Google News
37 comments
Information
Dear reader, to leave comments on the publication, you must to register.