"Hidden" Mausoleum: political expediency or attempt to "drape" the history of the Victory 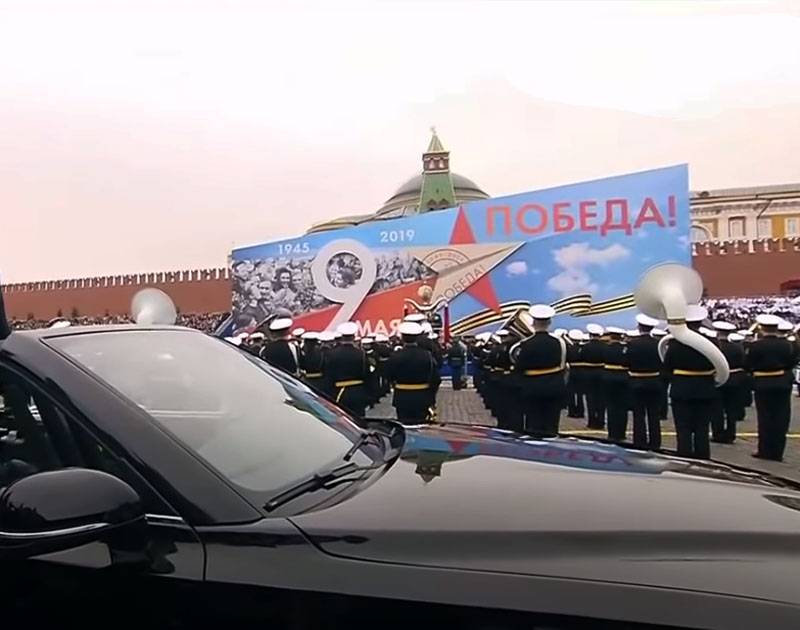 A few days before the anniversary Victory Parade, scheduled for June 24, a number of domestic politicians, primarily deputies of the State Duma from the Communist Party, appealed to Russian President Vladimir Putin to abandon the practice of the so-called drapery of the Lenin Mausoleum. In this regard, it is worth recalling from what time and for what reason such a "tradition" appeared.


Many today undertake to claim that it starts in 2005, with the celebration of the 60th anniversary of the Victory. This is generally true, but not quite. The starting point should be considered, rather, the year 1997, starting from which the leaders of our state stopped climbing the rostrum of the Mausoleum to host the parade. Either laziness was, or they understood that this height was not on them ... It was from that time that the stage began to be erected near the Mausoleum from which the president, members of the Supreme Armed Forces of the Armed Forces of Russia, looked at the military columns passing by.

“Honored guests” ... Here in this phrase most likely lies the explanation of the fact that it was in 2005 that the Mausoleum was first hidden under enormous panels and various designs. All of them, of course, were covered with inscriptions and images befitting the date, but the proud granite colossus from which Stalin admonished the soldiers of the Red Army, who went into battle in 1941 and greeted the victors in 1945, disappeared from the eyes of men.

Still would! “High representatives” of various countries attended that parade that year: German Chancellor Gerhard Schroeder, Japanese Prime Minister Junichiro Koizumi, Italian leader Silvio Berlusconi, French President Jacques Chirac. As well as no less high-ranking guests from other countries - even the notorious Russophobe, who was then heading Ukraine, Viktor Yushchenko made a mess of himself. And, of course, the most important and, as is customary to say, “landmark”, was that this event was “honored” by US President George W. Bush (Jr.) with his presence.

It is no coincidence that I began the enumeration with the heads of those states that during the years of World War II fought against the USSR and were defeated by its victorious army. Perhaps they did not want to offend their "subtle feelings"? Although, it was rather the head of the White House, which could not appear on television screens and front pages of newspapers against the background of the name, still deeply hated by the West, and the building, which is a symbol of the time when its rulers were forced to reckon with our country in words, but in deed.

At a time when it seemed that the normal coexistence of Russia and the United States, as well as Russia and other NATO countries, it is possible that our country will be allowed to develop and even accept it on equal footing in international affairs, such a step could still be somehow explain. Not to understand, not to justify, not to support, but at least to find for him a clear and pragmatic reason. However, have the geopolitical changes that have occurred since then not dispelled the last vestiges of illusions, if any, in the Kremlin? Why continue the ridiculous practice humiliating for a great country? In the hope that "is still forming"? By inertia?

In 2018, the high-ranking foreign guests of the Victory Parade were Serbian President Alexander Vucic and Israeli Prime Minister Benjamin Netanyahu. In 2020, the heads of 12 states are expected to arrive, including Belarus, Kazakhstan, Armenia, Serbia, etc. It seems that even Donald Trump was invited - so now, because of his cave anti-communism, we’ll hide our plywood again historyour memory? Will there be much honor? Especially after this figure and the people from his team, over and over again, begin to tell that the United States defeated Nazism. So, maybe it's time to remind who, whom, and most importantly, under whose authority and with what banners he won?

Someone very neatly and aptly said: “A parade without a Mausoleum is like a procession without icons ...” The Union of Soviet Socialist Republics, the country created by Vladimir Lenin, won the Great Patriotic War. The hordes of the Nazi invaders and their allies were defeated by the Soviet people under the leadership of the Communist Party, under the red banner and under the command of Joseph Stalin. Like it today, someone or not, but it was. And the opinion of the West on this matter does not have absolutely any value.

In this anniversary year, the Kremlin, as never before, should have completely rejected the incomprehensible attitude of most Russians towards that time, its realities and its relics. If Victory is our greatest holiday, valor and pride of our people, then its celebration should take place without any regard to anyone "from the other side" and attempts to correct our own history in the spirit of the notorious "political correctness".

The mausoleum is going to be "hidden" this year. Whether this can be called political expediency is a big question, especially considering that the authorities themselves are talking about the need to resist attempts to rewrite, "drape" history, including the history of Victory.

Author:
Alexander Kharaluzhny
Photos used:
frame of the report on the celebration of the 74th anniversary of the Victory (2019)

Ctrl Enter
Noticed oshЫbku Highlight text and press. Ctrl + Enter
We are
Situational analysis of the death of the MH17 flight (Malaysian Boeing 777), made on the basis of engineering analysis from 15.08.2014Results of the week. "God forbid to see Russian revolt, senseless and merciless!"
Military Reviewin Yandex News
Military Reviewin Google News
284 comments
Information
Dear reader, to leave comments on the publication, you must to register.