Funny ancestor of an aircraft carrier 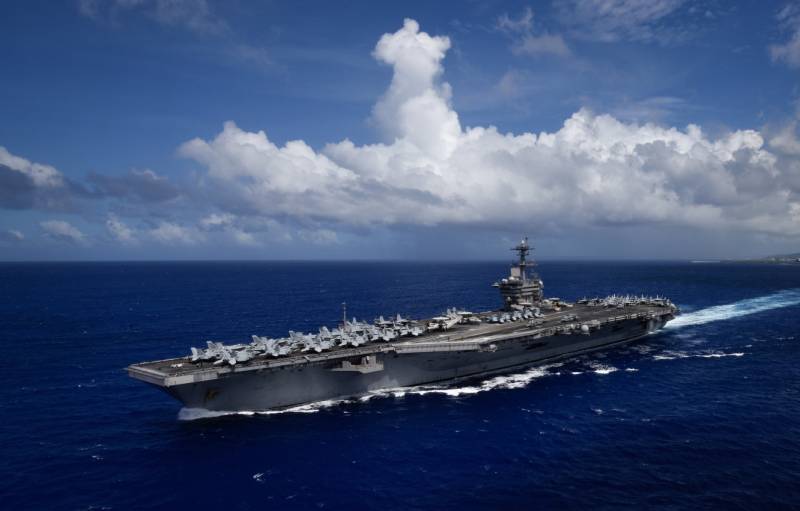 Yes, the material may seem ridiculous and frivolous, but believe me, the direct participants were not at all laughing. They, the participants, were engaged in a very serious matter of creation.

But today we plunge into history. It’s so deep, because history is a very serious thing. And the history of aircraft carriers began much earlier than many can imagine.

And we begin with what all aircraft were originally engaged in. That is, from intelligence.

Initially, intelligence was tied to the speed of movement and the height at which scouts could climb. And the higher the observer turned out to be, the easier it was for him to work. But the trouble is, suitable heights were not always at hand. Especially during the siege of cities, as well as at sea, where the height of the masts decided everything.

Not surprisingly, as soon as a person came up with a way to rise higher, the first ones who began to look at it intently were the military.

And as soon as things began, such as “furwin made like a big ball, blew nasty and smelly smoke from him, made a noose from him, sat in it, and the evil spirit lifted him above the birch,” the military realized that there it was.

True, the first air observers took off not on balloons or balloons, but on kites. It is clear that the idea that came from the Chinese was productive, although the flight depended on such things as the wind. Well, I had to select observers according to the principle "the easier the better." 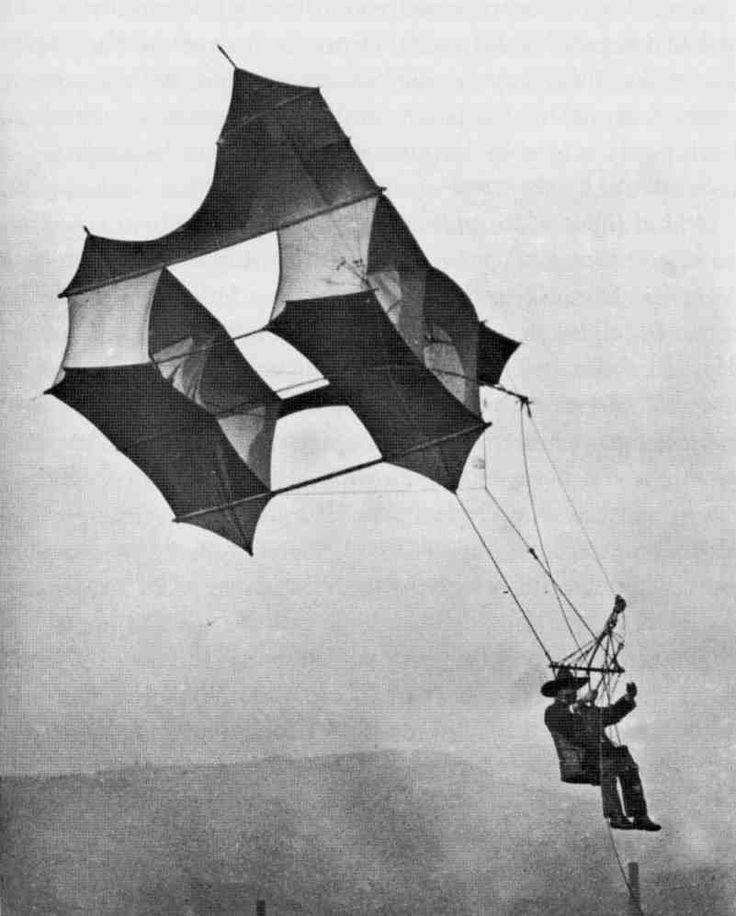 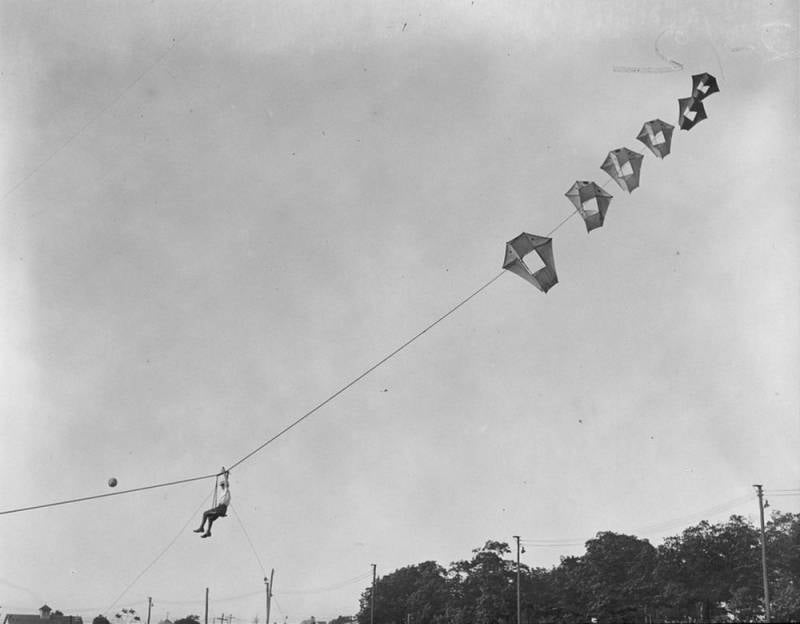 According to the records, the first attempts to adapt a balloon for reconnaissance were made in the army of Napoleon Bonaparte. And it seems even successful. And then a vile little thought arose about the idea that it would be nice to throw something explosive on the head of an enemy from a balloon.

But it didn’t work, because there wasn’t what could be thrown. Contact fuses have not yet been invented, and the lifting height was so-so. Not more than 400 meters, and the removal is not so far from the launch site, so it was easy to send a certain number of cores or (even more efficiently) a volcano hussar squadron that would chop down the crew of aeronauts to Kroshevo.

However, the idea firmly settled in the military brains. 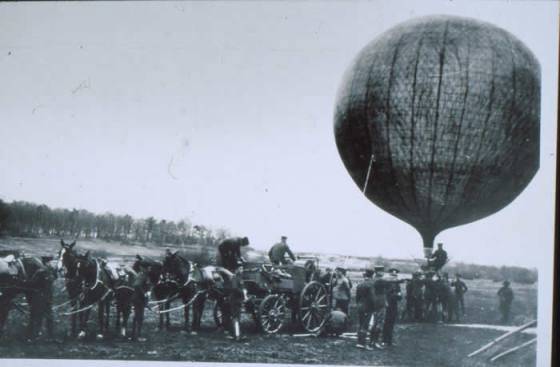 The next attempt was made by the Austrians, who besieged Venice in 1849, where the anti-Austrian uprising began. Venice was then part of the Austrian Empire.

And it was in 1849 that the first use of combat aircraft from ships occurred.

Austrian troops besieged Venice, having made a full blockade, but this did not go further than this. Venice was very well fortified, and even the landscape simply did not allow it to pull up heavy siege artillery in order to enlighten the rebellious.

There was a stalemate situation in which the Austrians simply could not normally fire at the city, which, of course, infuriated them.

Among the Austrians there was a smart man. This happens even in imperial armies. The lieutenant (!!!) of the Austrian artillery, Franz von Juhatic, proposed to bombard the city with balloons.

The idea was very innovative: balloons had to be launched in the wind when it was blowing towards Venice, and at the right time the clockwork was supposed to drop bombs on the city.

The Austrian commander, Marshal Radetsky, liked the idea, and the work began to boil.

Why the Austrians decided to use balloons from the water is difficult to say today. But the first application was from a carrier of sea-based, in modern language.

In fact, everything was simpler: the Vulkano auxiliary ship was used as a balloon carrier. Balloons equipped with bombs clung to the sides of the ship. With a fair wind, balloons detached and sent to the target. After the estimated time, a mechanism was released over the city that released the bombs, and they flew down.

Everything was very approximate, but the idea at that time was good. And very modern. It is unlikely that a real military influence would be significant, but moral - completely.

Satisfied with the panic in the city, the Austrians continued to shoot around the city with cannons, which the wind was not fundamental.

The fact, albeit subtle, has remained in history. In June 1849, for the first time on board a warship, an aircraft (unmanned) with a bomb load started.

But whoever needed it, he remembered. And already in 1862, in the waters of the Potomac River, the army of the northerners used this weapon in the Civil War. True, in a slightly different quality.

The northerners took the old coal barge and converted it into a balloon carrier. A stable barge made it possible to place on itself all the necessary equipment, a repair, lifting, telegraph station (!) For observer reports and a supply of hydrogen for filling the shell.

Accuracy of movement was not required here, it was enough to hang out the balloon higher and observe the actions of the enemy or adjust the fire of your batteries.

It turned out very effective. So much so that the barge, cruising out of reach of the southerners' guns, took them out so much that an airborne detachment from several ships was sent in order to stop the reconnaissance outrage of the northerners.

However, the northerners assumed something similar, and a small battle was fought on the Potomac between the landing of the southerners and the aerostat carrier guard forces, which consisted of two gunboats, an armed tugboat and a sloop. Southerners got the teeth, but they copied the idea and built their ship with a reconnaissance balloon.

But the Civil War was observed from Europe, and watched intently. They even sent their representatives and observers. For acquaintance with novelties and military experience. 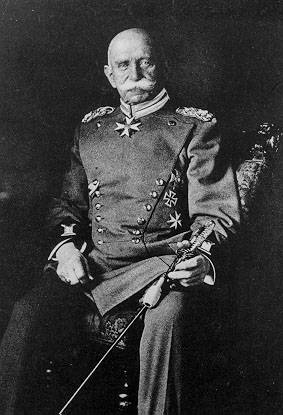 Probably, no one will be surprised that Major von Zeppelin during the Franco-Prussian War of 1870-1871 very widely used balloons to collect data ... 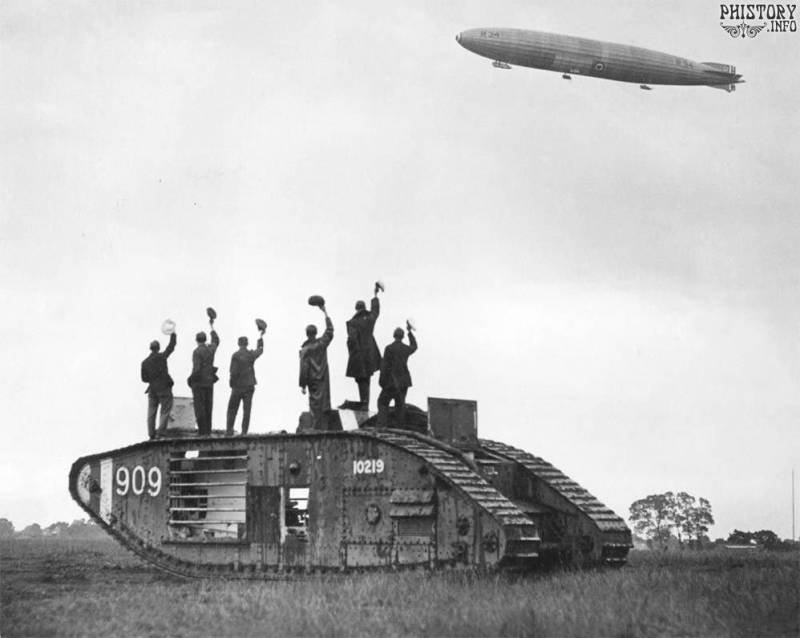 On the navy the novelty was also mastered. Even with greater interest than on land, because the sea has no mountains, heights and other advantages. Only the masts from which all visual observation was conducted. 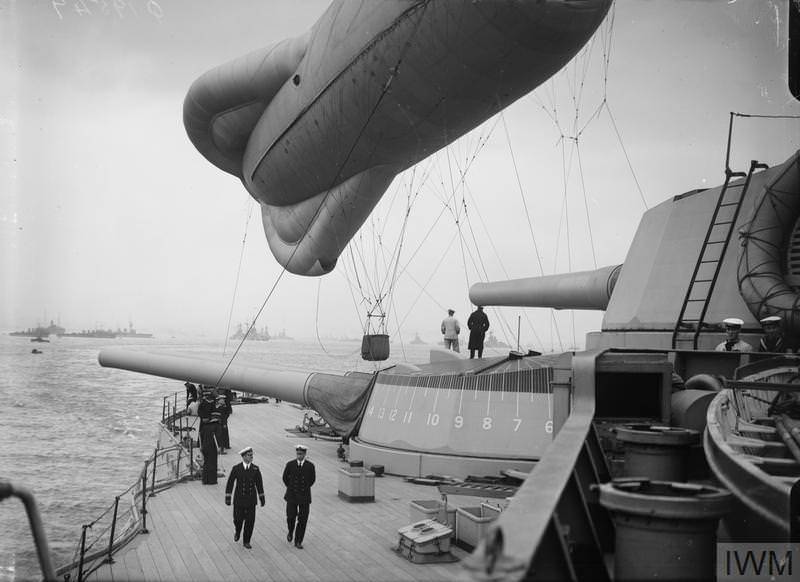 But the mast can’t be made so high that you can really get an advantage over the enemy. A few tens of meters, and that’s it. But the balloon could be lifted by how much the cable length and weight would allow. That is a few hundred meters. And this is a real advantage.

But working with a balloon was not an easy task. Firstly, the wind, which interfered with the work, and secondly, the shape of the balloon. Draft balloons turned and rotated with the wind just awful, and often observers simply could not do their job properly.

This went on until the Germans invented the so-called snake balloon. That is, the balloon is slightly elongated and with plumage, which played the role of a stabilizer. 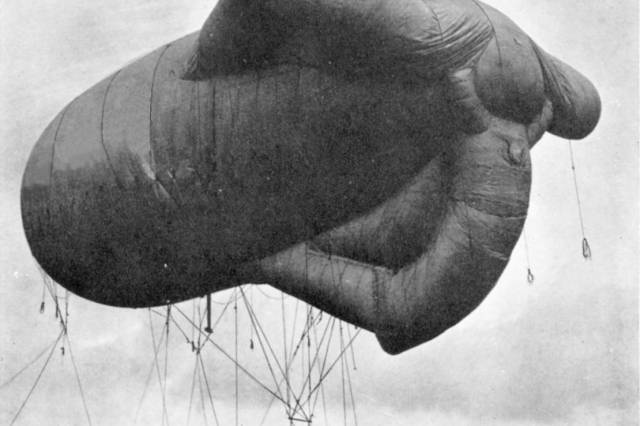 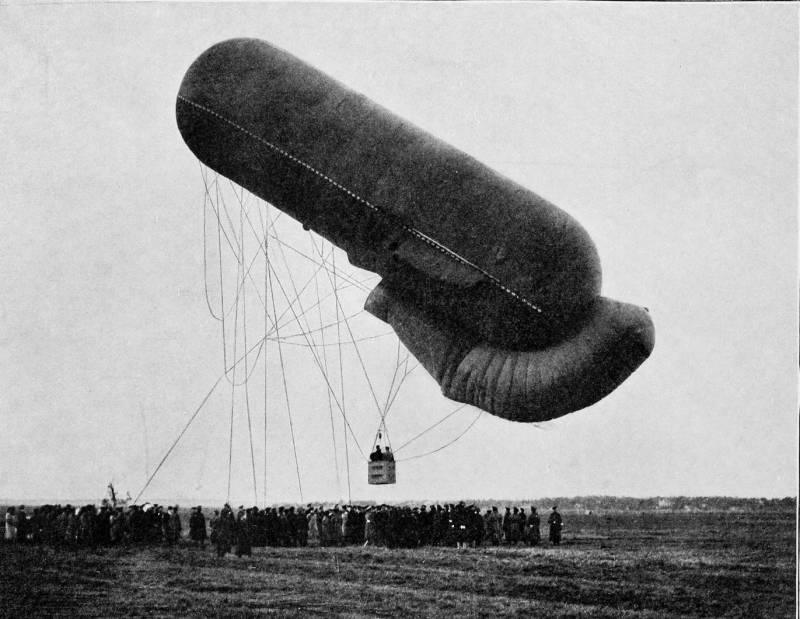 And the world erupted. I liked everything the concept of an air spotter at sea, which is completely free from smoke from shots of huge guns of armadillos and dreadnought. And they still fired black powder, so there was enough smoke. By the very clowns.

And scouts were very inexpensive, for the needs of the fleet and carrying balloons it was possible to convert all sorts of commercial ships. The cheaper the better. 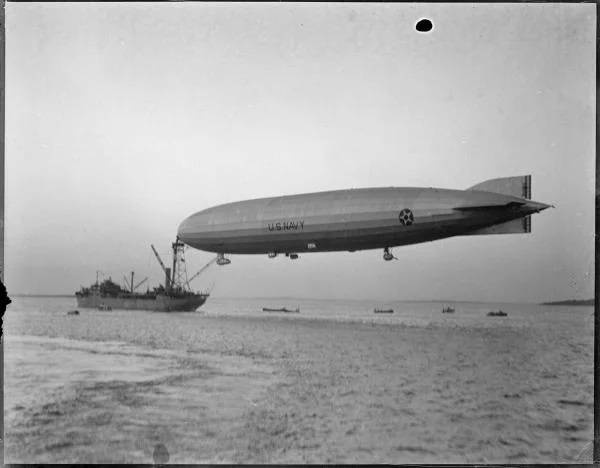 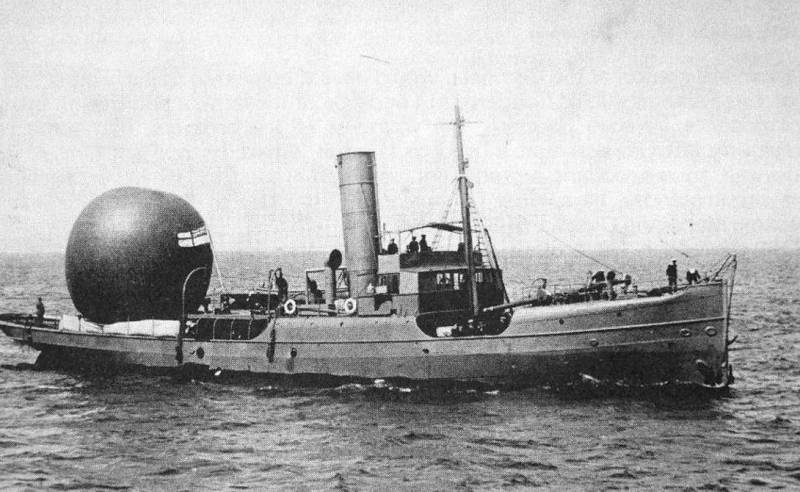 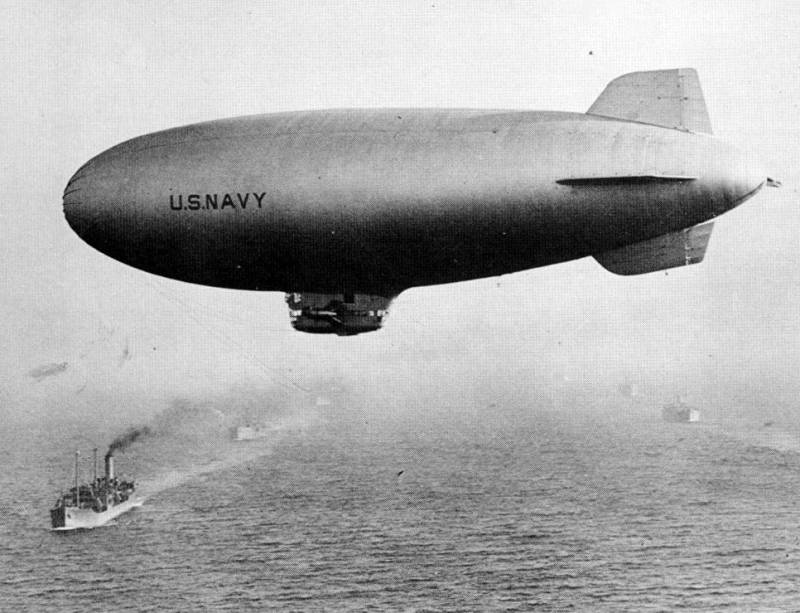 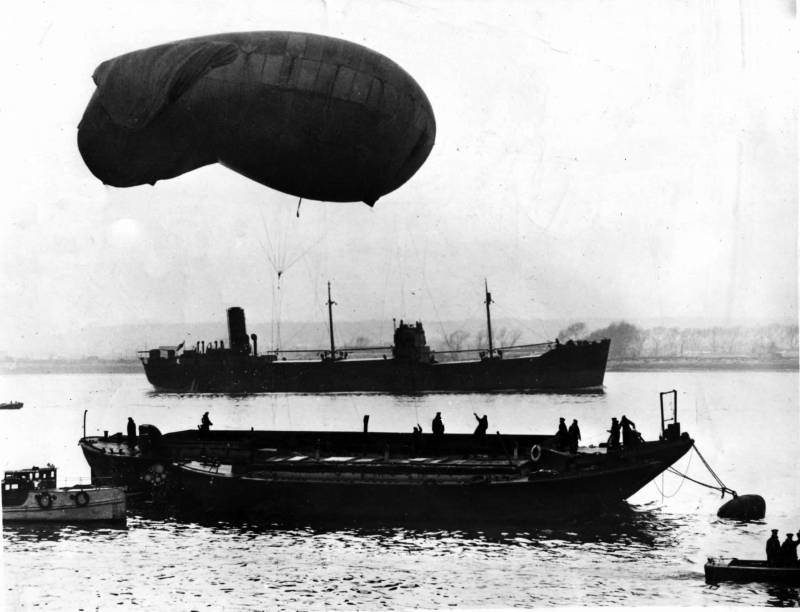 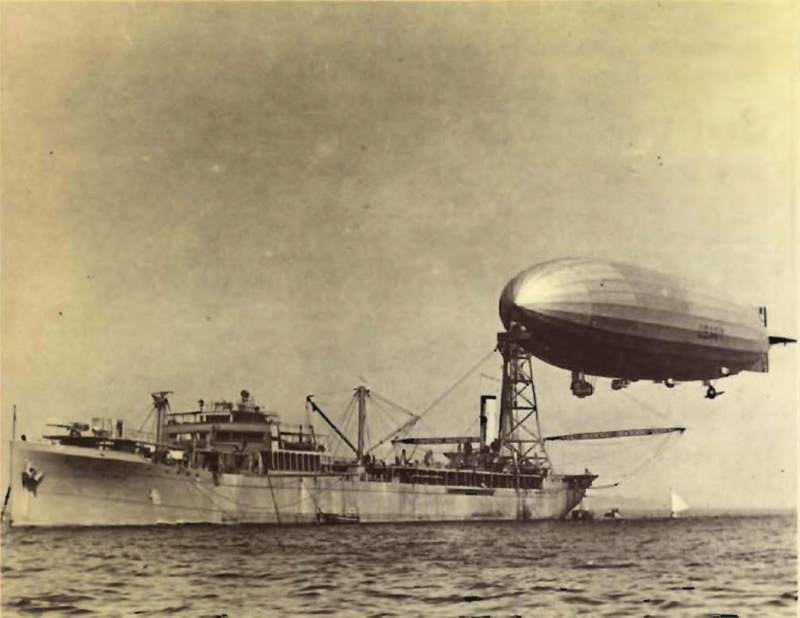 By the way, here in terms of building and rebuilding balloons, the Russian fleet was the first. In 1904, the auxiliary cruiser Rus appeared in the ranks of the Russian fleet. It was a German commercial ship, which bought Count Stroganov and gave it to the needs of the fleet.

The steamer (“Lan”) was fresh and rather fast, 17 knots - this is quite good. Therefore, they did not put weapons on Rus, but armed the newly made cruiser with four snake-type balloons. 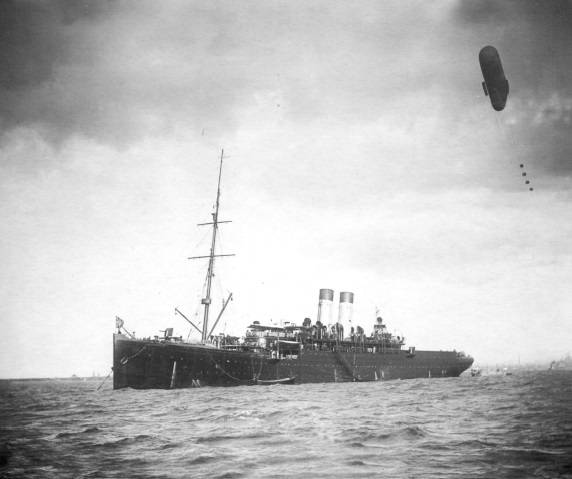 In addition to them, the “ammunition” included one traditional ball-shaped balloon and four small signal balloons. Signal balloons were designed to send signals to ships in a squadron at a great distance.

And on other Russian ships, balloons began to appear. So, I found a photo of the cruiser "Russia" with a bubble at the stern. 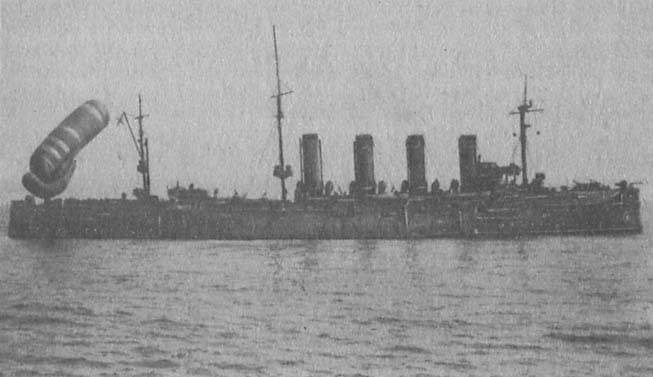 Balloons took root on ships. The benefit was obvious. Development idea ruined aviation. Yes, the plane in World War I only got on the wing. He carried one or two machine guns and several small bombs, while normal combat airships bristled with trunks of not only machine guns, but also guns. And the bombs took hundreds of kilograms.

Alas, the aerostat lost in the dispute with the aircraft. And the balloons began to remodel into hydroplanes, that is, carriers of seaplanes. 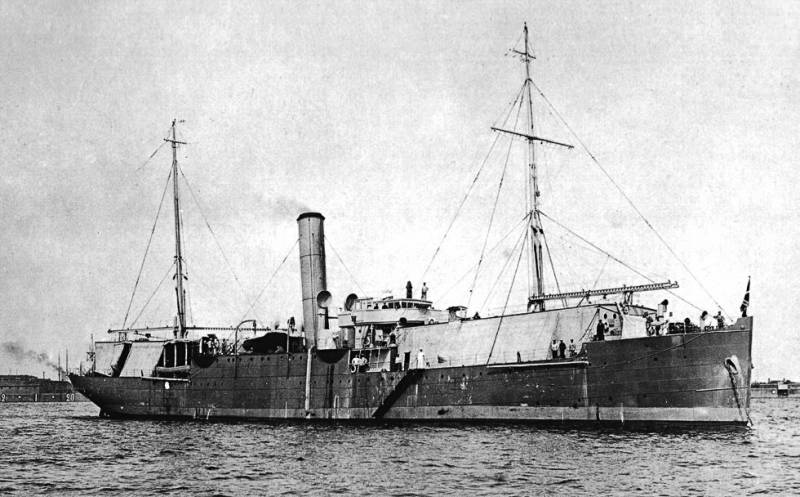 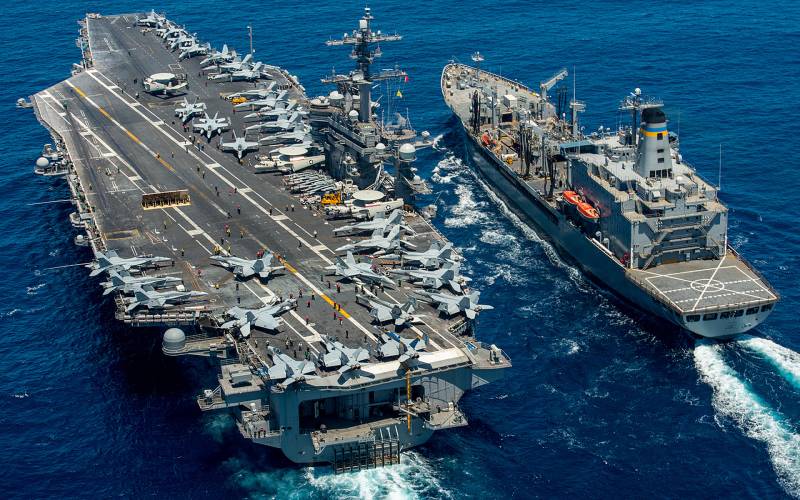 And the essence of the application, by the way, is not very different from the Austrian idea of ​​1849. So the idea was very, very good ...

Ctrl Enter
Noticed oshЫbku Highlight text and press. Ctrl + Enter
We are
Defective aircraft carriers are not suitable for the Russian fleetWhy did the battleships really disappear?
Military Reviewin Yandex News
Military Reviewin Google News
33 comments
Information
Dear reader, to leave comments on the publication, you must to register.