"The most powerful self-propelled howitzers": the US Army received the new "Paladins" 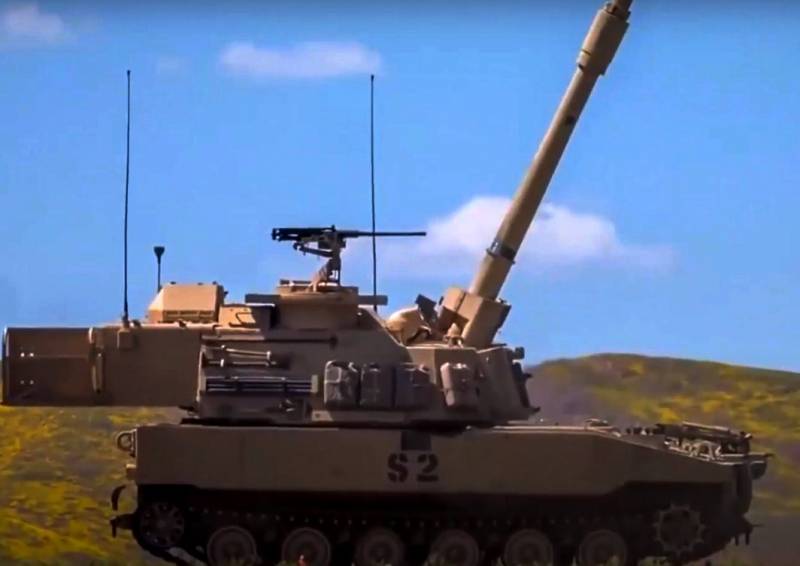 The American army received a new modification of the Paladin self-propelled howitzer. The 155-mm howitzer M109A7 is designed to replace the M109A6 Paladin in army artillery in order to increase the combat effectiveness and power of the latter.

This is the latest modification of the M109 self-propelled guns manufactured by BAE Systems. It is based on the Paladin M109A6, but it has an improved chassis that provides greater survivability of the machine and lower operating costs. In addition, instead of the Detroit Diesel engine with 440 hp. on a new modification, the engine from the Bradley Cummins V903 combat vehicle with a capacity of 675 liters is installed. with.

Also, the modernized howitzer has a digital fire control system, a semi-automatic loading system, and the gun’s hydraulic control systems in the new version are replaced by an electric drive. This decision made it possible to increase the ammunition load of self-propelled guns, which inevitably affected its combat effectiveness for the better.

As you know, in March 2020, the US Department of Defense signed a contract with BAE Systems Corporation in the amount of $ 339 million. The subject of the contract is the production of 48 self-propelled howitzers M109A7 (SPH) and M992A3 ammunition transport vehicles.

A batch of new howitzers was put into service with the 2nd Battalion of the 82nd Field Artillery Regiment, one of the best artillery regiments in the US Army.

The most deadly combat brigade on planet Earth has become even more deadly with the latest version of the Paladin’s 155 mm self-propelled howitzer. The 2nd battalion of the 82nd Field Artillery Regiment took possession of the M109A7 yesterday,
- say the US military on Facebook.

Note that the 82nd Field Artillery Regiment, based at Fort Hood in Texas, is really belligerent. Its units participated in the fighting in Vietnam, in the Gulf War, and fought in Iraq. By the way, separate units of just the 2nd battalion of the 82nd artillery regiment are still deployed in Iraq.

M109A7 Paladins roll into the Steel Dragon motorpool. 2-82FA is the first battalion in the 1st Cavalry Division to receive the Army's newest fleet of M109A7 Paladins. These "big guns" represent the cutting edge of technology - delivering timely and accurate indirect fire in support of the GRAYWOLF brigade. Modernization of our combat platforms ensures that the Steel Dragons remain the most lethal Artillery battalion on planet Earth.

The appearance of the new “Paladins” in the US Army artillery was the result of a revision of the US Army’s arms policy. The fact is that three years ago, the American research center RAND published a report on the combat capabilities of the Russian army, considered among the most likely opponents of the US armed forces. Experts concluded that the capabilities of the American ground forces are seriously inferior precisely in the field of artillery.

For a long time, the American military department did not pay enough attention to the development of artillery weapons, which allowed Russia to build the potential of its artillery units. In the American army, until recently, the basis of artillery was various modifications of howitzers, developed back in the 1960s. Therefore, there was a need to re-equip the artillery units with the new M109A7, which American officers ambitiously call the world's most powerful and deadly howitzers.

Ctrl Enter
Noticed oshЫbku Highlight text and press. Ctrl + Enter
We are
Situational analysis of the death of the MH17 flight (Malaysian Boeing 777), made on the basis of engineering analysis from 15.08.2014Artillery systems - faster, easier, stronger
Military Reviewin Yandex News
Military Reviewin Google News
85 comments
Information
Dear reader, to leave comments on the publication, you must to register.