Day of the heroic Syrian army: the country will overcome the conspiracy 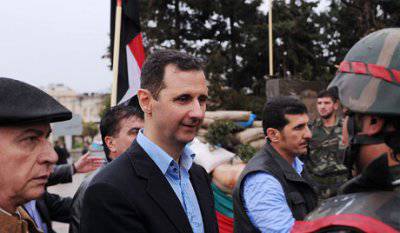 Syrian Minister of the Interior Muhammad Ibrahim Al-Shaar can safely be called "born the second time." He managed to survive a miracle in the terrible July 18 act of terrorism that took the lives of the Syrian Defense Minister and other leaders of the Army. Not yet fully recovered after being injured, this courageous man gave a press conference. He said that "the warriors of the valiant Syrian army and law enforcement officers are in the power to eliminate terrorists and restore security."


But some TV channels hostile to Syria, spread rumors that he died during the attack. Hurried, gentlemen!

And today, the Syrian army celebrates its holiday - the 67 anniversary of the creation of the Syrian Army. In this regard, the President of Syria, Bashar Assad, addressed the soldiers and officers. He said that in the struggle of the army against armed rebels, the fate of the country is determined: "The fate of our people and our nation, its past, present and future depends on this battle." With sincere warmth, the President responded about defenders of the Fatherland who steadfastly oppose gangs.

This holiday in Syria is celebrated with tears in his eyes: the pain of the commanders who have fallen from the terrorist act has not yet subsided. Heavy battles go in the city of Aleppo. Against this background, the West is increasing pressure on Syria.

So, unable to push through the UN Security Council a resolution on armed intervention (that is, aggression against a sovereign state), Western countries are trying to bypass international law. They want to push their draft resolution through the UN General Assembly.

Unlike the Security Council, where Russia and China are firmly committed to preventing violations of the sovereignty of Syria, there is no veto right in the UN General Assembly. The decision is made by a majority vote. The West hopes that the obedient leaders of most countries will vote in favor of the draft resolution proposed to them.

Yes, few dare to contradict the world's gendarme in the face of the United States. Most leaders fear that in case of disobedience, they will be subjected to the same methods of harassment, demonization and violent overthrow attempts that the West and its supporting satellites use against the leaders of independent states. On the West’s account, demonization and the subsequent murder of such popular leaders as Slobodan Milosevic, Saddam Hussein, Muammar Gaddafi ... Permanent harassment and slander against Bashar al-Assad, Alexander Lukashenko, Hugo Chávez, Evo Morales, Fidel Castro ...
Few dare to resist, and it can be expected that the resolution of the General Assembly will be adopted by a simple majority of votes, among which will be the votes of not only the leading predators of the West, but also their semi-colonies.

But, unlike the binding resolutions of the UN Security Council, the resolutions of the UN General Assembly are RECOMMENDATION. That is, they are not binding. And such an anti-Syrian resolution will be used for moral and informational pressure on Syria: they say, the "world community" is almost entirely and completely for the departure of the legitimate President of Syria from office. They will say that "only a few countries opposed the resolution" - and the Western media modestly keep silent about the fact that the population of these countries - first of all, Russia and China - is a rather large share of humanity. And on behalf of humanity, the elite who have appropriated the power will speak ...

The Russian Foreign Ministry spoke out against such blatant manipulation of public opinion and the desire to go around international law. However, there are cases when Western countries, and especially the United States, openly violate the law, trample down not only international law, but also recalcitrant countries. It is as if the West does not understand that it is leading to a new world war in which all of humanity may perish, considering how many weapons mass destruction managed to accumulate the leading powers.

This week, the Syrian Foreign Ministry launched a counterattack and made a statement to the UN Security Council. Foreign Ministry opposes the support of terrorists who are now trying to seize the city of Aleppo. "Unfortunately, those who claim to care about Syria never called on terrorist groups to stop the armed attacks and join the political process proposed by the UN and approved by Syria," the Foreign Ministry said in a statement.

Syria appeals with a demand that it justly cannot be: “demand that armed groups withdraw from Syrian cities and stop their terrorist activities ... The conscience of these armed groups, which are openly supported by money and weapons, are Saudi Arabia, Qatar and Turkey, terrifying crimes committed in Damascus and still committed in Aleppo. " In a statement sent to the head of the UN Security Council and the Secretary-General of the organization, the militants seized several densely populated areas and use local people as human shields. They kill those who do not support them and force people to leave their homes "

However, Syria does not have to expect the support of the United States and its satellites in the holy cause of the fight against terrorism. After all, the anti-Syrian coalition deliberately prefers to blame the "dictatorial regime" for everything, completely closing its eyes to the terrible crimes of the "peaceful rebels", who, like, "are fighting for democracy."
So far, only Russia has issued a statement on the situation in Aleppo, demanding that the militants stop violence against residents of the city. As rightly noted, it is impossible to demand from the Syrian government an imaginary cessation of "violence" until the rebels, without fulfilling the Annan plan, seek to seize peaceful cities.

And the crimes that the insurgents are doing in the Aleppo-occupied neighborhoods are terrifying.

Thus, in the first days of fighting for Aleppo, they abducted Sheikh Abdulatif Al-Shami, who was the imam of the Amn mosque in the Seyfetdol district. On the same day, the sheikh was brutally murdered. And they did this atrocity in the Muslim holy month of Ramadan!

The terrorists carried out a cold-blooded massacre of the elders of the Berry tribe in Aleppo. First, they were also taken prisoner, and then, after torture, they were shot. So they punished the heads of the tribes for refusing to support the "rat rebellion."

Another sad news from Aleppo - the cousin of the Supreme Mufti of Syria was abducted, also from a mosque in the city. This is how they “respect” the religion for which they are supposedly fighting. Such acts have no justification in any religion of the world, they are not in any law, legal or moral. The justification for such atrocities is for some reason only among the countries of the West and the Gulf countries supporting them in the anti-Syrian hysteria.
There is some good news. Thus, in the suburbs of Damascus, two hostages from Italy were released by the constitutional troops. They were employees of Ansaldo Energia. The abduction occurred on July 17 2012, when the Italians were driving to Damascus airport, wanting to leave Syria. Italian Foreign Minister Gilio Terzi thanked the Syrian army for the liberation of its citizens, but the question is: will Italy leave the anti-Syrian coalition, if only out of elementary gratitude for saving its citizens?

So in a difficult time, the country meets its defenders day. But the army, the people, and the leadership do not lose optimism. So, Syrian Foreign Minister Walid Mualim, while in Tehran, expressed confidence that "the country's defense capability remains high, and Damascus is able to protect itself." According to Muallem, the disruption of the Damascus assault plan led to a change in insurgent plans and an armed attack on Aleppo. But the city will be freed. Muallem also warmly thanked Russia for its position in the international arena.

The Iranian Parliament made a statement in which it supported the struggle of the Syrian people against the conspiracy. Only the consolidation of various forces in the international arena who do not want to trample on international law can save the world, both in Syria and on the Planet.

And on the Day of the Syrian Army - the Army, which has resisted Western dirty plans for the longest time, we wish all defenders of the fraternal country to defeat the enemy and protect the Fatherland! We remember the dead and we wish the mothers of soldiers to see all their sons alive and healthy!

Ctrl Enter
Noticed oshЫbku Highlight text and press. Ctrl + Enter
We are
Bashar al-Assad: In Syria, not the “revolution” that the enemies are talking about, but the revolution of the army and the people against terroristsSyria: Americans scare themselves, and Asma Asad buys chairs
Military Reviewin Yandex News
Military Reviewin Google News
141 comment
Information
Dear reader, to leave comments on the publication, you must to register.