Libyan war: reflections on the chances of Marshal Haftar 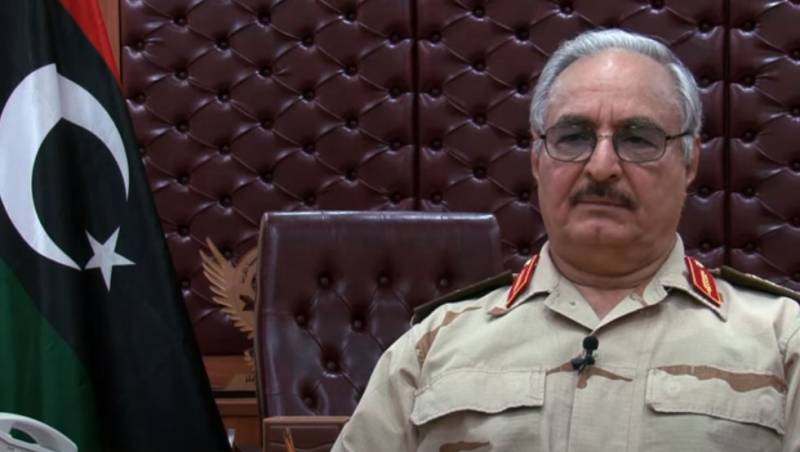 Events in Libya entered the next round of a seemingly endless spiral. Since this country, virtually destroyed by foreign intervention, has been plunged into the chaos of the civil war, about one and the same scenario has been unfolding in it over and over again. One of the sides of the conflict, which has been continuing for years, begins a “last and decisive” attack on their opponents, they ask for peace, but the representatives of the attacking side who see themselves as winners without five minutes resolutely reject these proposals. Until the roles of opponents change exactly the opposite ...


Today, Khalifa Haftar, whose Libyan National Army stood almost on the threshold of Tripoli yesterday and was preparing to celebrate the victory, advocates a ceasefire and a peaceful resolution to the conflict. Today, the LNA is knocked out of the suburbs of the capital, it also lost control of a number of other important facilities, including the city of Tarhuna. Sirte was in jeopardy, essentially the key to the east of Libya, which is still controlled by Haftar and the country's parliament supporting him. The affairs of the field marshal are not just bad, but very bad. This is perfectly understood in the Government of National Accord, whose leader Faiz Saraj already considers himself a triumph, and therefore does not want to hear about reconciliation.

However, it is perfectly clear to everyone that the fate of Libya will ultimately be decided not by these two “statesmen”, whose armed formations by the armies can be called with a very big stretch. The "grandiose success" of the PNS was primarily ensured by the direct military intervention of Turkey, which Haftar’s troops, alas, were unable to counter effectively, despite all the supplies of weapons and equipment. If Ankara continues to continue in the same vein, the days of the LNA can indeed be numbered. Unfortunately, so far too much indicates that this is how it will be.

From various sources, information has been received on increasing Turkish military expansion in the country: the arrival of another batch of mercenaries from at least one hundred militants recruited in Idlib to Libya, new smuggling weapons and the like. The PNS, for example, openly announced the opening of an “air bridge” with Ankara, which will allow the transfer of weapons for it contrary to the EU’s IRINI naval mission aimed at curbing such supplies. Even more alarming are the voiced by the Turkish media data on the allegedly reached agreement between Ankara and Tripoli on the provision of Al-Vatiy air base and military base in Misrata port for the needs of the Turkish Air Force and Navy.

Nevertheless, we should not forget that the far-reaching plans of Recep Erdogan to establish complete military-political control over Libya are extremely worrying and complete rejection not only in Moscow. The European Union is completely unsatisfied with both Ankara’s attempts to restore order in the Middle East by force of arms and its “offensive” in the oil-bearing regions of the Mediterranean, which threatens to result in a military conflict with Athens. Both countries are part of the NATO bloc, but Greece belongs to the EU. And there the parties clearly demonstrated their choice, appointing the Greek admiral Theodoros Mikropoulos as the head of the IRINI mission mentioned above. The hint is more than transparent.

Egypt is categorically against the intentions of Turkey. So far, its president, Abdel Fattah al-Sisi, has come up with the so-called Cairo Declaration, which calls for reconciliation of the parties, which Khalifa Haftar supports. However, if the events take a completely nasty turn and there is a real danger that the Libyan territory will fall under the control of the PNS (that is, Ankara), completely different actions may follow from the Egyptian side. And a military clash with Cairo, which has one of the most combat-ready armies in the Middle East today, will cost the Turks too expensive.

Moreover, many geopolitical players are seriously concerned that the situation is sliding towards the transformation of Libya into Syria in the 2014-2015 model. The information that militants of the “Islamic State” and a number of other extremist terrorist organizations of the same kind are prohibited in the ranks of armed PNS groups comes regularly from many sources. That revival of the IG * is definitely not needed by anyone and in any form, including the United States, so far endorsing and supporting the actions of Turkey.

Perhaps the last days of negotiations between Vladimir Putin and Recep Erdogan could be a salvation for the LNA. The Libyan question was unambiguously discussed at them, however, both the details and the final result of this dialogue, of course, were not disclosed. If the two presidents managed to come to some kind of consensus (at least within the framework of the Cairo declaration), then Haftar will have chances to gain a foothold at the present borders, having retained at least the eastern part of the country. And then the parties will again begin to prepare for the next round of the fight ...

Ctrl Enter
Noticed a mistake Highlight text and press. Ctrl + Enter
We are
Why does Russia support Field Marshal Haftar?New Libyan commander in chief and his house in Virginia
39 comments
Information
Dear reader, to leave comments on the publication, you must to register.