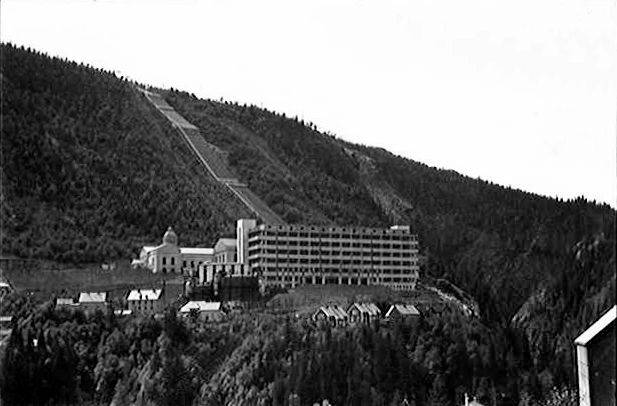 The action in Wemork is considered by the British the best sabotage operation of the Second World War. It is believed that the explosion of a heavy water plant in Norway was one of the main reasons that Hitler did not have time to create a nuclear weapon.

In 1940, on the personal instructions of British Prime Minister Churchill, the Special Operations Executive was created, abbreviated as ODR. Special units that are part of the ODR were engaged in sabotage and subversive activities on enemy territory. Cells of well-trained fighters were also created to organize resistance groups. The main enemy of Britain then was the Third Reich.

The ODR included two Norwegian units: Rota Linge and Shetland Group. They were under the general control of the Norwegian government in exile in London. There was also another group, less popular, as it was associated with Moscow (a future adversary of NATO and Norway). In the northern Norwegian region of Finnmark, guerrillas operated under the command of the Soviet command. Norwegian partisans were trained from refugees by instructors from the NKVD. They operated in Tromsø and Finnmark. Partisan actions assisted the 14th Soviet Army in the Arctic. After the war, their actions against the Nazis were hushed up, the partisans were considered Soviet spies.

Since the creation of ODR history Norwegian special forces. At first, Rota Linge was trained following the example of British commandos for raids behind enemy lines. The Norwegian unit participated in the battle for Norway. The founder of the "Company" Martin Linge died during one of such operations in December 1941. The main operations of the Norwegian resistance were organized with the help of the Rota. The Shetland Group was included in the Norwegian Navy. Her main task was sabotage in German ports. So, in 1943, L. Larsen tried to destroy the German battleship Tirpitz with the help of a torpedo. However, the storm prevented this attempt.

The best diversion of world war

The most famous operation of Norwegian saboteurs is the liquidation of a heavy water plant in 1943 near the city of Ryukan (Ryukan). It is possible that this particular event did not allow Hitler to receive atomic weapons during the Second World War. The Germans were among the first to begin work on the atomic project. Already in December 1938, their physicists Otto Hahn and Fritz Strassman for the first time in the world carried out artificial fission of the nucleus of a uranium atom. In the spring of 1939, the Third Reich realized the military significance of nuclear physics and new weapons. In the summer of 1939, construction began on Germany’s first reactor facility at the Kummersdorf training ground near Berlin. Uranium export was banned from the country; a large amount of uranium ore was purchased in the Belgian Congo. In September 1939, the secret Uranium Project was launched. Leading research centers were involved in the project: the Kaiser Wilhelm Physics Institute, the Institute of Physical Chemistry of the University of Hamburg, the Physics Institute of the Higher Technical School in Berlin, the Physicochemical Institute of the University of Leipzig, and others. The program was supervised by Speer of Arms. The leading scientists of the Reich participated in the work: Heisenberg, Weizsacker, Ardenne, Riel, Pose, Nobel laureate Gustav Hertz and others. German scientists at that time were great optimists and believed that atomic weapons would be created in a year.

The Heisenberg group spent two years doing the research necessary to create a nuclear reactor using uranium and heavy water. Scientists have confirmed that only one of the isotopes, uranium-235, which was contained in a very small concentration in ordinary uranium ore, can serve as an explosive. But it was necessary to isolate it from there. The main point of the military program was a nuclear reactor, and for it, graphite or heavy water was needed as a moderator of the reaction. German scientists chose heavy water (creating a problem for themselves). There was no heavy water production in Germany, as in France and England. The only heavy water production in the world was in Norway at the company Norsk-Hydro (a factory in Wemork). The Germans occupied Norway in 1940. But there at that time was a small supply - tens of kilograms. Yes, and they did not go to the Nazis, the French managed to take out the water. After the fall of France, water was taken to England. The Germans had to establish production in Norway.

In 1941, British intelligence received evidence that the Germans used a heavy water plant in Norway for the Reich nuclear program in Norway. After collecting additional information in the summer of 1942, the military command demanded the destruction of the strategic facility. They refused a large-scale air operation. Firstly, the plant kept large reserves of ammonia. Nearby were other chemical plants. Thousands of civilians could suffer. Secondly, there was no certainty that the bomb would break through multi-story concrete floors and destroy the production center. As a result, they decided to use a sabotage group (Operation "Stranger"). In October 1942, the first Norwegian agents were successfully thrown into Norwegian territory (Operation Grouse). The group included A. Kelstrup, K. Haugland, K. Helberg, J. Paulson (team leader, experienced climber). They successfully reached the place of operation and carried out preliminary preparation of the action.

In November 1942, on two bombers with gliders began to transfer 34 sappers under the command of Lieutenant Matven. However, due to lack of preparation, difficult weather conditions, the operation failed, gliders crashed. The surviving saboteurs were captured by the Germans, questioned and executed. The previously landed “Linge Guys” reported the failure of the operation. They were instructed to wait for a new group.

USO has prepared a new operation to destroy the facility in Wemork - Operation Gunnerside. Six Norwegians were selected in the new group: the group commander was Lieutenant I. Reneberg, his deputy was Lieutenant K. Haukelid (first-class demolitionist), Lieutenant K. Jygland, sergeants F. Kaiser, X. Storhaug and B. Stromsheim. In February 1943, they were successfully landed in Norway. The new group connected with the first, which had been waiting for them for more than four months.

On the evening of February 27, saboteurs went to Wemork. On the night of February 28, the operation began. His man from the plant staff helped to get into the facility. Saboteurs installed charges and successfully left. Part of the detachment remained in Norway, the other moved to Sweden. 900 kilograms (almost an annual supply) of heavy water were blown up. Production was stopped for three months.

In the summer of 1943, the Allies learned that the Germans had restored production in Wemork. The company managed to sabotage - add dark vegetable oil or fish oil to heavy water. But the Germans cleaned the heavy water with filters. The Americans were worried that Hitler might get nuclear weapons before them. After the sabotage, the Nazis turned the object into a real fortress, strengthened security and tightened access control. That is, the attack of a small group of saboteurs was now ruled out. Then it was decided on a large-scale air operation. At the same time, the number of possible victims among the local population was turned a blind eye. On November 16, 1943, 140 strategic bombers attacked Ryukan and Wemork. The bombing lasted 33 minutes. More than 700 heavy two-hundred-kilogram bombs were dropped at the enterprise, and over 100 hundred-kilogram bombs were dropped at Ryukan.

The smoke generators that the Germans installed around the hydropower plant after the sabotage were turned on immediately and proved effective. The bombing turned out to be ineffective. Only a few bombs hit large facilities: four at the station and two at the electrolysis plant. The heavy water plant, located in the basement of the building, was not damaged at all. An agent in Norway, Haukelid, reported:

“The hydroelectric power station is out of order. Heavy water plants protected by a thick layer of concrete were not affected. Among the civilian Norwegian population there are victims - 22 people were killed. "
The Germans decided to evacuate production and the remnants of finished products to Germany. To ensure the safety of the transport of important cargo, safety measures have been further strengthened. The SS men were transferred to Ryukan, the air defense was strengthened, and a troop of soldiers was called up to protect the transport. Participants in local resistance decided that it was pointless to attack Wemork with the available forces. It remained possible to carry out sabotage during the transportation of heavy water by rail from Wemork or by ferry to Lake Tinshn. The operation on the railway had major flaws, so they decided to attack with a ferry. The activists of the resistance group were Haukelid, Larsen, Sorle, Nielsen (he was an engineer in Wemork).

Early in the morning of February 20, 1944, a railway ferry, loaded with wagons with heavy water, departed from the pier strictly according to the schedule. Norwegian saboteurs laid explosives in the ferry, calculated that the explosion should occur during the passage over the deepest part of the lake. After 35 minutes, when the ferry was above the deepest place, an explosion occurred. The ferry began to roll and settle on the stern. The cars rolled into the water. A few minutes later the barge sank. In the depths of Lake Tinnsh turned out to be 15 tons of heavy water.

So the last hope of the Nazis died to get a precious load for the atomic project. The nuclear project in Germany continued, but could not be completed by the spring of 1945. The war was lost.

Ctrl Enter
Noticed oshЫbku Highlight text and press. Ctrl + Enter
We are
Chernobyl notebook. Part of 3Diplomats of the People's Commissariat of Defense: on the eve and during the war
Military Reviewin Yandex News
Military Reviewin Google News
77 comments
Information
Dear reader, to leave comments on the publication, you must to register.