“White lives are important too!” Protests and police brutality 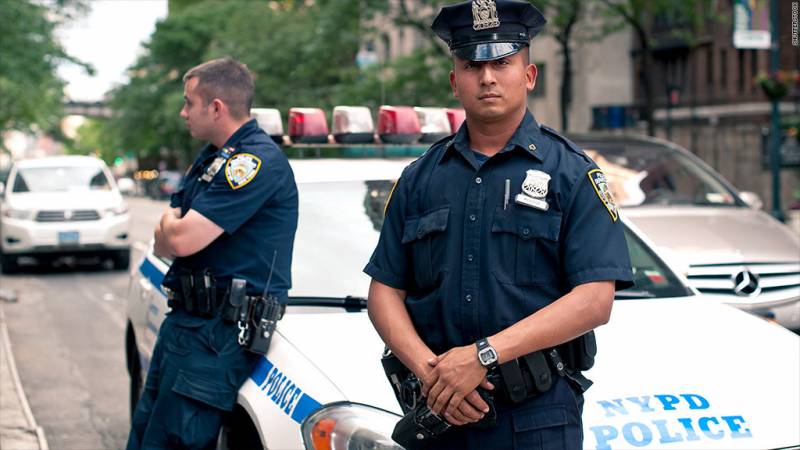 It all started intriguingly. And for the black population of the country, and for the president, and for the lazily interested public in other countries. Protests promised to be an effective way, if not a coup in the United States, then at least the initiator of large-scale changes in the country. But, it seems, all the speeches, warmed by slogans such as "We will not be silent!" or “Black lives are important!” end without any particular results. But the hype pogroms with protests (it is very difficult to separate them from each other) gathered a lot. Every self-respecting worker of culture, art, business and the like of all skin tones puts on his page meaningless posts about supporting blacks. Black celebrities are vying to share childhood memories of racial discrimination in kindergarten, school, and playgrounds. However, there are still no clear demands from the protesters. The impenetrable Trump has nothing to even react to.

What else to change in US law? Blacks already have more rights in some aspects than whites. Higher education professors are trying not to take one-on-one exams for African Americans to avoid prosecution for racism. I rated such a student “unsatisfactory” and then prove that it is not because of his skin color. Or take an American cinema. Not a single modern film claiming box office success can do without the presence of a black man in the frame, and even better, a pair with the Mongoloid actor. And if the film for some unimaginable reasons still appears on the screen in a racially inferior composition, then it risks incurring a wave of criticism. This was the case with the HBO series Chernobyl: screenwriter and actress Carla Mary Sweet amused everyone a year ago with an angry post about the lack of black characters in the film. Most likely, the Suite has no sympathy for the unfortunate African-American population, it just decided to get its dose of fame. Which, as you know, can be monetized in the future. 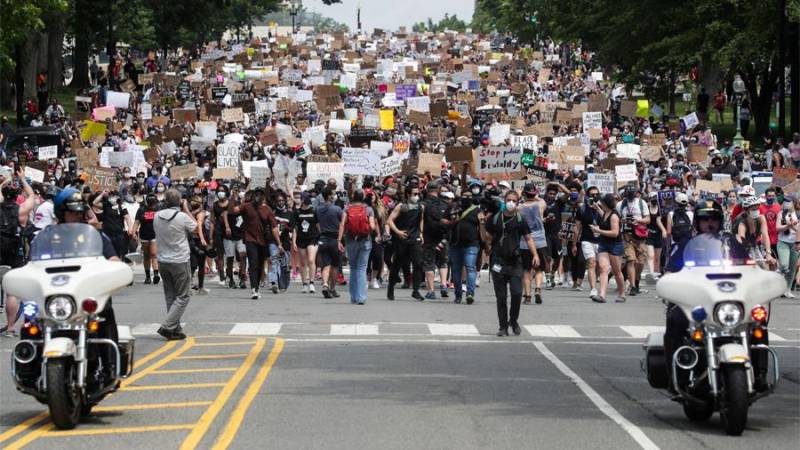 Source: iz.ru
In the US, everyone is trying to earn dividends on the protest situation. And the entrepreneurship of the country's population cannot be denied. It is possible that large morning corporations hold daily morning flies on the topic "How can we still support the national Negro minority?" HBO removed the American classic Gone With the Wind from the box office, citing the inadmissibility of some scenes with black slaves. Historical The scenes in the film accurately enough reproduce the life and customs of that time, experts say. Are company functionaries ashamed of their own history? Or is HBO thus trying to somehow justify itself for the absence of blacks in the Chernobyl scenario?

The protests of May and June 2020 in the United States seem to be remembered only by demolished monuments to the Confederates. In Richmond, they are going to dismantle the monument to General Robert Edward Lee, one of the most famous American military leaders of the XIX century. Such gestures are considered as the reckoning of descendants for the sins of their ancestors in slave years. Well, it is worth reminding the crowd, demanding justice, that the name of the Confederate General was also called the M3 “Li” tank of World War II. What is not a reason for restoring historical justice and renaming? 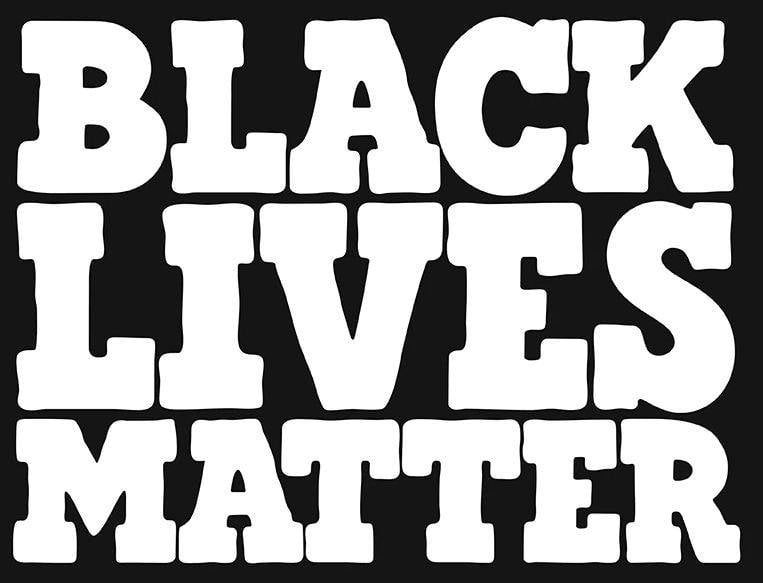 Source: benjerry.com
The most paradoxical thing is that Europe swept over the wave of the fight against racism. The Belgians, tired of quarantine, decided to drop a monument from the pedestal of the second king of the country Leopold II in Antwerp, famous at the time for the predatory colonization of Africa. In Great Britain, a monument to Edward Colston, a philanthropist, slave trader and merchant of the XNUMXth-XNUMXth centuries, went under the knife. The selectivity of the masses is striking: destroying the memory of the oppression of blacks, the British forget about the atrocities that their ancestors committed in India in the era of colonization. Obviously, modern Indians have not reached that level of civilization in order to earn the attention and sympathy of the enlightened collective West. The fight against racism in the format of a protest show gives rise only to new manifestations of intolerance and distracts from real problems. For example, the excessive rigidity of law enforcement officers against the white population of the country.

Skin color is not to blame

The stiffness of the US police is largely justified by the presence in the Constitution of the second amendment, guaranteeing the population the right to wear and store weapons. At the same time, the profession of a policeman is considered to be very prestigious in the American ranking card: for many years, applicants have been waiting for a chance to become part of the United States law enforcement systems. The American policeman is really a symbol of protection and justice, simply because the selection for this position is very strict. Why then did such a resonance happen with the murder of Floyd? If the unfortunate person were white, there would be no such wave of indignation. There was no protest four years ago when two policemen shot dead Daniel Shaver, the father of two children, with impunity. He just waved a rifle in the window, eyewitnesses called the police, who killed the unfortunate. Five bullets from an automatic rifle left no living space on Shaven's face and chest, praying for mercy at that moment. The police officer was acquitted, and the US public silently swallowed such chaos. Obviously, at the expense of paying the debt for centuries-old slavery of blacks. 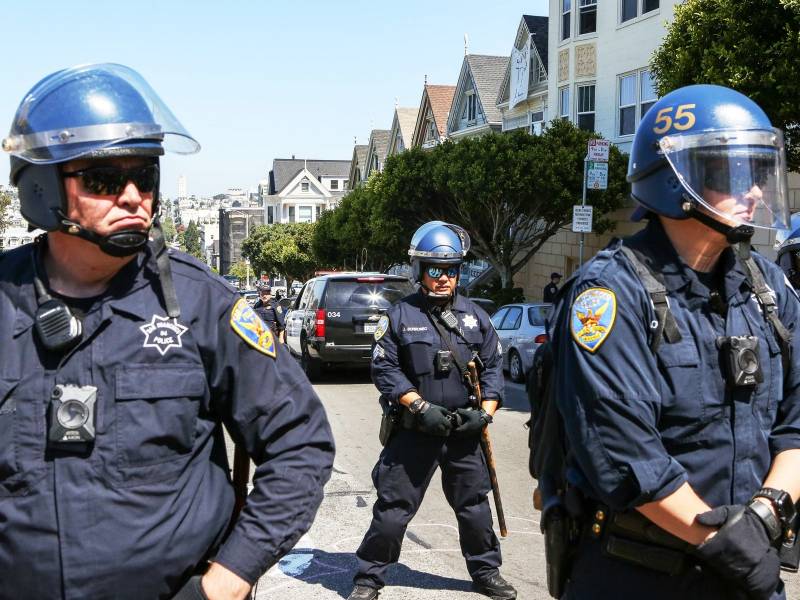 Source: pikabu.ru
Of course, the American police have a certain bias against African Americans, this cannot be denied. If a black man finds himself in a primordially “white” quarter late at night, he will have a lot of questions. Studies show that blacks feel insecure and fear law enforcement officers, expecting much worse treatment than white. But at the same time, they forget about the primordially “black” neighborhoods in many cities of the United States, where it is dangerous for a white person to appear at any time of the day. If the police until recently risked their lives in the Bronx, then will they really be loyal to all blacks after that? And here suddenly the statistics of the Washington Post database appear, which mentions the year 2019, when in shootings, police shootings are twice as many white than black citizens. Killed 494 people with white skin, 258 dark-skinned and 238 representatives of other races and nationalities.

Here it is worth making an adjustment for the ratio of representatives of two nationalities in the country: there are six times more whites in the United States than blacks. In this situation, when African Americans make up only 13% of the US population, they make up 26% of all deaths at the hands of the police. But there is another aspect of this issue. It turns out that half of all murders that reach the court are committed by African Americans. And here the opposite indignation appears. Only 13% of the US population accounts for half of the killings in the country? Maybe that’s why you shouldn’t be surprised at the police shooting at blacks and unjustified violence?

An interesting study was conducted by an African American economist at Harvard University Roland Fryer. He collected police statistics in ten regions of the United States and showed that blacks and Hispanics are indeed more likely to come under police pressure: they are beaten, handcuffed, guns pointed at them, and even arrested. And in the case of the police opening fire on defeat, Fryer did not find any statistically significant dependence on skin color. Police officers confidently and brutally kill, not paying attention to the skin color of the criminal. And while every American has a potential right to own a weapon, such cruelty will be justified.

Ctrl Enter
Noticed oshЫbku Highlight text and press. Ctrl + Enter
We are
"Black Islam": US social-racial split aggravated by religiousBlack racism as a tool to "reset" the US
Military Reviewin Yandex News
Military Reviewin Google News
155 comments
Information
Dear reader, to leave comments on the publication, you must sign in.