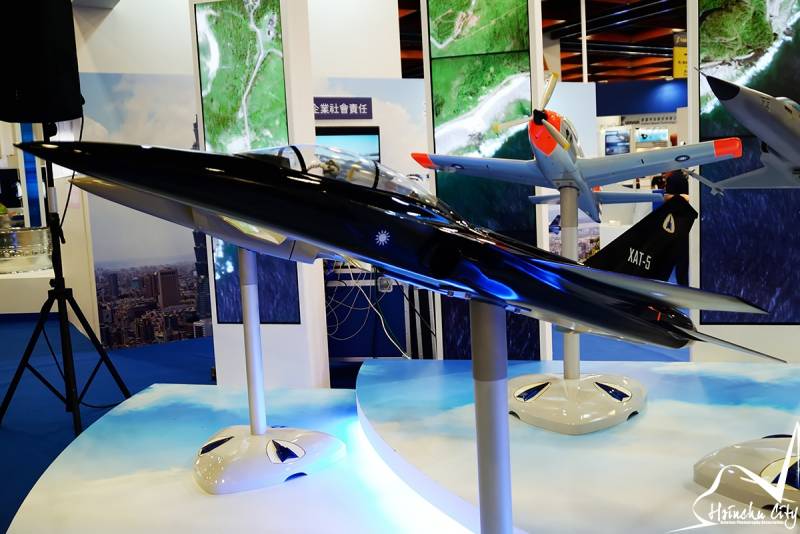 The layout of the aircraft XAT-5, 2017 Photo Hccapa.com

The Air Force of the Republic of China, together with scientific and design organizations, continues work on the promising combat trainer XT-5. Design was completed, the first flight prototype was built, and on June 10 he made his first flight. It is expected that in a few years the new UBS will go into series and will be able to replace obsolete equipment.

Project for the competition

Work on the future XT-5 Yongying (“Yuning” - “Brave Eagle”) began in 2013 as part of the new program of the Ministry of National Defense. The Air Force needed a promising UBS to replace aging samples, and they were ready to consider domestic or foreign proposals.

The local aircraft manufacturing organization Aerospace Industrial Development Corporation (AIDC), in collaboration with the Chung-Shan Institute of Science and Technology (CSIST), has proposed two options for UBS. The first, called the AT-3 MAX Advanced Trainer, provided a deep upgrade to the existing AT-3 training. The second XAT-5 project was carried out on the basis of the F-SK-1D Ching-kuo fighter. The possibility of purchasing imported equipment was also considered.

In 2016, work on upgrading the AT-3 stopped in favor of the XAT-5, renamed the XT-5. Soon, the Air Force made its choice, and in February 2017, a contract appeared with AIDC and CSIST to complete the design, construction and testing of the prototype. Plans for further mass production were also identified. 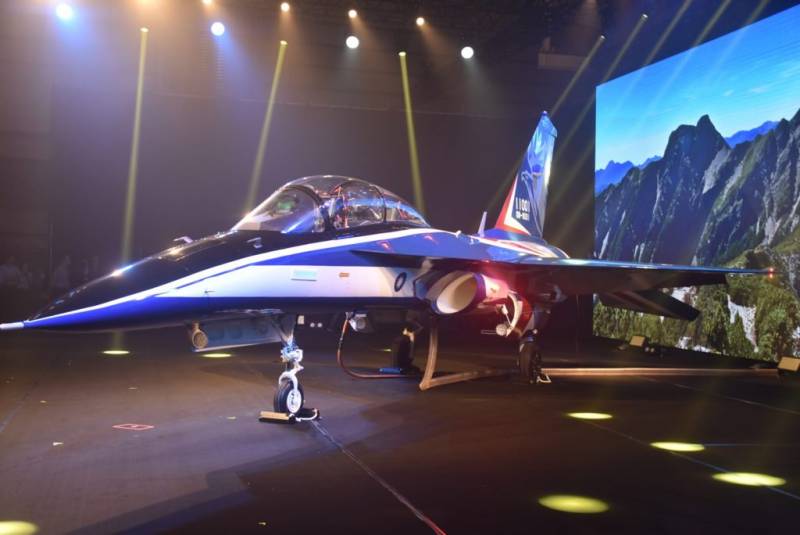 Presentation of the first prototype X-5, September 2019. Photo by the Taiwan Ministry of Defense / air.mnd.gov.tw
In 2017, it was reported that flight tests of a promising UBS will begin in 2020. In the early twenties it was planned to begin mass production and by 2026 to transfer in part 66 aircraft. The total cost of the program is 68,6 billion Taiwan dollars (approx. 2,2 US dollars).

The XT-5 Yunin combat training aircraft was developed on the basis of the F-CK-1D fighter, which was built before the end of the nineties. In order to optimize for solving new problems, the base aircraft was changed, simplified and re-equipped. As a result of this, the fighter lost some of its combat qualities, but received advanced training opportunities for pilots.

XT-5 is a twin-engine high wing with swept wing and high flight characteristics. The glider retains the main features of the basic design, but differs in the widespread use of composite materials, which positively affected the mass. Existing and released volumes are given for additional fuel tanks. Chassis redesigned to increase durability.

Significant processing has undergone electronic complex. UBS does not have a bow radar, but receives developed systems that provide training for pilots. The equipment allows you to practice conducting air combat, the use of weapons, etc. The aircraft is controlled from two cabins with full equipment. 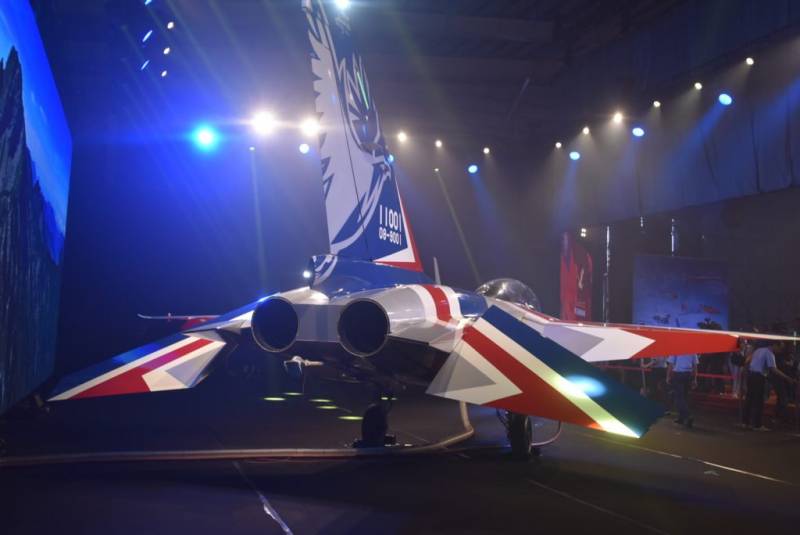 View from a different angle. Photo by Taiwan Ministry of Defense / air.mnd.gov.tw
The XT-5 powerplant complies with the previous project and includes two Honeywell / ITEC F125 turbojet engines with afterburner thrust of 4310 kgf. By facilitating the design and maintaining the engines, the aircraft can perform a supersonic flight.

Fighter F-CK-1D is equipped with a 20-mm automatic gun M61A1. Points are provided for the suspension of weapons at the wingtips, under the wing and under the fuselage. The combat training aircraft at its base is not equipped with a cannon. The first prototype, recently released for testing, has no pylons under the wing. Perhaps they will be installed later for the relevant tests.

The performance characteristics of the promising XT-5 have not yet been fully published, but in general they should comply with the parameters of the base F-CK-1D. Thus, the Taiwan Air Force will be able to get a supersonic combat training aircraft with sufficiently high flight characteristics, wide training opportunities and reduced combat potential.

The construction of the first experimental XT-5 began in the spring of 2018 and took quite a lot of time. It was only possible to complete it at the beginning of September 2019. A few weeks later, on September 24, AIDC Corporation held a presentation of the prototype car in a solemn atmosphere. Due to the high importance of the project, the country's leadership attended the event. In the near future they promised to transfer the aircraft for testing, according to the results of which all other issues should be resolved. 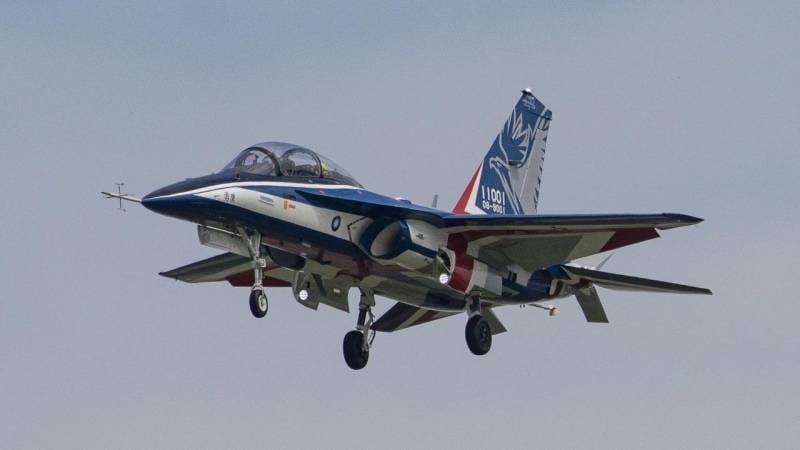 XT-5 in its first flight, June 10, 2020. Photo by Bmpd.livejournal.com
By the beginning of this summer, Taiwanese aircraft manufacturers completed the bulk of ground tests. On June 1, the first jogs were held at Qingquangang Air Base. Then they completed the final preparation for flight tests.

The first flight of the XT-5 took place on June 10. The combat training aircraft took off, spent approx. 20 minutes and after completing a simple flight program, he sat down successfully. It was announced that new flights will take place on June 11 and 12.

The purpose of the first three days of flight tests is to determine the general parameters and capabilities of the aircraft. In addition, they are being carried out in preparation for the new official event. On June 22, a ceremony will take place during which the XT-5 flight will be shown to the military and political leadership of the country.

Under the terms of the existing contract, four experienced UBS will be involved in flight tests. One is ready, others are at different stages of construction. Most likely, they will be handed over for testing no later than 2020-21. Several prototypes will accelerate testing, so that in the coming years mass production will begin. It is planned to be completed in 2026 with the supply of 66 aircraft.

It is easy to calculate that in order to fulfill an existing order, AIDC will have to establish fairly fast production of equipment. If the tests of the experimental XT-5 can be completed next year, and the series starts from 2022, then 13-14 aircraft will be produced annually. The start of production in 2023 increases the necessary pace to 16-17 cars annually. 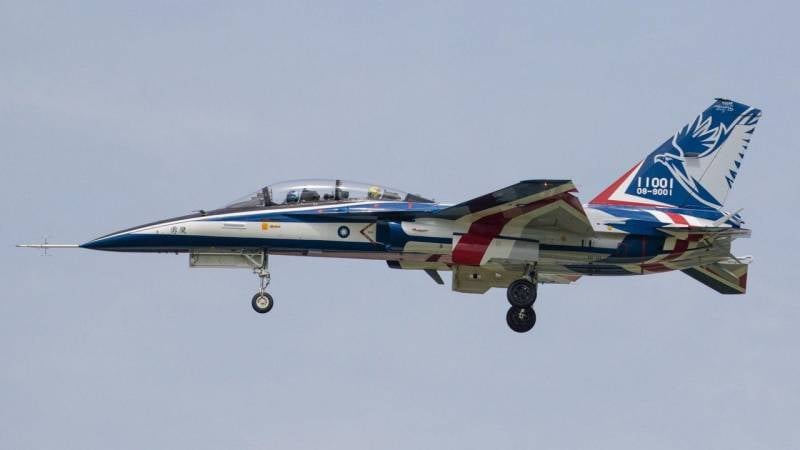 Place in the troops

At the moment, the Air Force of the Republic of China uses a three-stage pilot training system, for which several types of aircraft are used. Initial training is carried out on a Beechcraft T-34 Mentor turboprop, then cadets switch to the jet AIDC AT-3. The subsequent stages of training are carried out using training modifications of combat aircraft F-5, F-16, etc.

Using the new XT-5, they plan to rebuild this system. It will remain three-stage, but basic and advanced training will be carried out with the help of one UBS of the new model. It is expected that this will simplify and speed up the process of training flight crews, as well as reduce the dependence of the Air Force on obsolete equipment, including foreign production.

First of all, with the help of XT-5 they will replace the obsolete AT-3 and F-5, which have developed most of the resource. T-34 initial training aircraft will not be affected by such an upgrade. In addition, several dozen training modifications of imported aircraft will remain in operation. Replacement plans remain unknown.

The promising AIDC XT-5 Yunin combat training aircraft went on flight tests only a few days ago. He has yet to go through a full range of checks and confirm the design characteristics, after which he will be able to go into the series and get into the training units.

The service of the new aircraft will begin only in a few years, but Taiwan already has reason for optimism. His aviation the industry has once again shown its ability to develop and build advanced aircraft of various classes required by the national air force.

However, it is too early to be proud of success - until 2026 it is necessary to complete the tests and build 66 production aircraft. Such plans do not leave much time and require the mobilization of forces. Whether AIDC and its subcontractors will be able to cope with the order on time, time will tell.