2 August 1945 in Potsdam, the conference of the Big Three ended 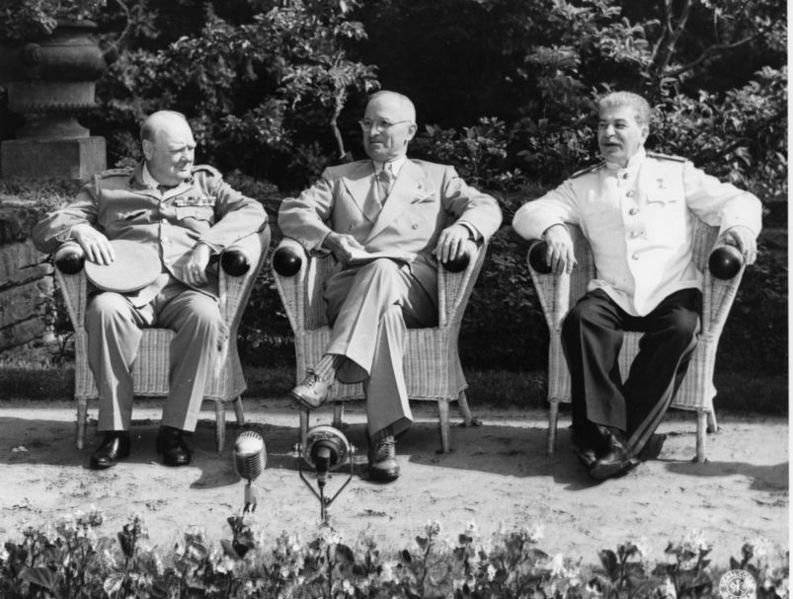 2 August 1945, in the Berlin suburb of Potsdam, was completed the 17-day conference of the victorious powers: the Soviet Union, the United States and the United Kingdom. It was the third and last meeting of the so-called. "Big Three": Joseph Stalin, Harry Truman and Winston Churchill. The great powers that triumphed in the war against the Third Reich made the most important decisions on the settlement of defeated Germany and liberated Europe. Moscow confirmed its promise no later than three months after Germany’s surrender to declare war on the Japanese Empire.

By the time the Berlin (Potsdam) Conference began, relations between the allies in the anti-Hitler coalition had deteriorated significantly. In the politics of the Western powers, anti-Soviet sentiments intensified, which was the result of a sharp change in the balance of forces in the world in favor of the USSR. However, the union did not break up, because the United States and Great Britain were very interested in the participation of the Soviet Union in the war against the Japanese empire. Without the participation of the USSR in the war in the Asia-Pacific region, the conflict could continue for another one or two years and lead to huge losses.

The first to attend the conference, July 15, was American President Harry Truman. On the same day, but a little later, British Premier Winston Churchill also flew in. On the afternoon of July 16, Joseph Stalin arrived by train. The conference of the great powers was held in Cecilienienhof Palace, which they began to build in 1913 year. The last residence of the Hohenzollerns was built by Kaiser Wilhelm II by the design of the architect Paul Schulz-Naumburg for his son Crown Prince Wilhelm and his wife Cecilia (from the dukes of Mecklenburg-Schwerinsky).

Near the building, on Lake Jungfernsee, three warships were on duty - one from each great power. The president was elected American president. During the conference, W. Churchill was defeated in the election, and Berlin was succeeded by Labor Party leader Clement Richard Attlee. The USSR was represented not only by Stalin, but many famous Soviet people: Foreign Minister Vyacheslav Molotov, diplomat Andrei Gromyko, generals Georgy Zhukov, Konstantin Rokossovsky, admiral fleet Nikolai Kuznetsov.

July 24 Harry Truman, in order to exert psychological pressure on the leader of the Soviet Union, told Stalin in person during a personal meeting about conducting a new super-power test in the USA weapons (16 July 1945 was in the desert near Alamogordo in the state of New Mexico was tested the first nuclear bomb). However, Stalin reacted calmly. In the USSR, they knew about the American atomic project and themselves conducted work in the same direction. That same evening, Stalin instructed Molotov to talk with Igor Kurchatov, the chief scientific director of the atomic program, to accelerate work on the creation of Soviet nuclear weapons.

During the Berlin Conference, the basic political and economic principles were laid down, which should have guided the winning countries in the initial period when dealing with defeated Germany. The country decided to demilitarize, democratize and denazify in order to eliminate the source of the threat. Germany decided to completely disarm, destroy the entire military-industrial complex. At the same time, the National Socialist Party was liquidated and all Nazi and military agitation was prohibited, and measures to punish war criminals were envisaged. An agreement was reached on reparations, i.e. Germany’s liability for damages incurred by countries subject to its aggression. The USSR was to receive material assets from the Soviet zone of occupation. In addition, in favor of the Soviet Union agreed to withdraw a fourth of the industrial equipment, which was intended for reparations from the western occupation zones (American, British and French). The German naval and merchant fleet was divided into equal shares between all the victorious powers (including France). At the insistence of the Soviet side at the Berlin Conference, it was decided to create and publish lists of war criminals of the Third Reich, to transfer them to the international tribunal.

Solved and issues of post-war Europe, the new borders of Germany. The Soviet Union was handed over to Koenigsberg (from 1946 of the year - Kaliningrad) and the adjacent area. The structure of the Lithuanian SSR included a part of East Prussia (Klaipeda region). Most of the territories seized from Germany, became part of the Polish state. The western Polish border was established along the Oder-West Neisse line. In addition, the Poles were given a part of eastern Prussia and the city of Danzig (Gdansk). The Anglo-Saxons, especially Churchill, opposed the significant expansion of Poland at the expense of Germany. However, Stalin won this “battle”. Poland owes Stalin the fact that it included two thirds of Pomerania, part of East and West Prussia, and Silesia. The German population moved from the territories transferred to the USSR and Poland to Germany (including from Czechoslovakia and Hungary).

Attention was paid to the problems associated with the conclusion of peace agreements with former allies of Nazi Germany - Italy, Hungary, Romania, Bulgaria, Finland and the admission of these states to the UN. At the conference, the Council of Ministers of Foreign Affairs of the victor countries was established. He was to develop texts of peace treaties and take measures to establish diplomatic relations with the governments of the defeated countries. The American and British delegations again raised the issue of the entry of the Soviet Union in the war against the Japanese. The Soviet side confirmed that the USSR would enter the war in the previously scheduled time. De facto, with the tacit consent of England and the United States, Moscow’s rights to possession of South Sakhalin and the Kuril Islands (they were reached at the Yalta Conference as part of agreements on the Far East) were confirmed.

22-23 in July Stalin and Molotov presented at the Berlin Conference the territorial claims of the Union to Turkey: Moscow intended to join the territories in Transcaucasia, which belonged to 1878 of the Russian Empire. The Soviet side also demanded a favorable regime for Soviet ships in the Black Sea straits. These claims were not supported by the British and American delegations.

The Potsdam Conference was a real triumph of the USSR and Stalin personally. The Yalta and Berlin conferences laid the foundations for a new world order. The USSR became a superpower on which the solution of key world issues depended.