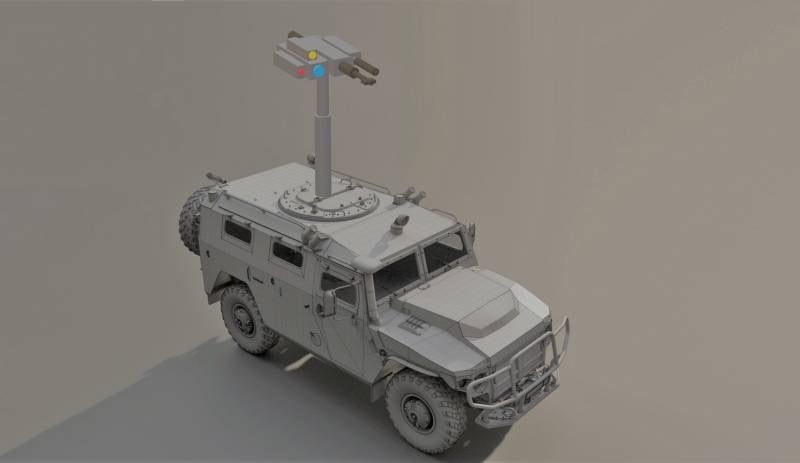 One of the leading trends in the development of military equipment of the XNUMXst century has been the widespread use of remotely controlled weapons modules (RWMS), which are placed on ground and surface platforms. 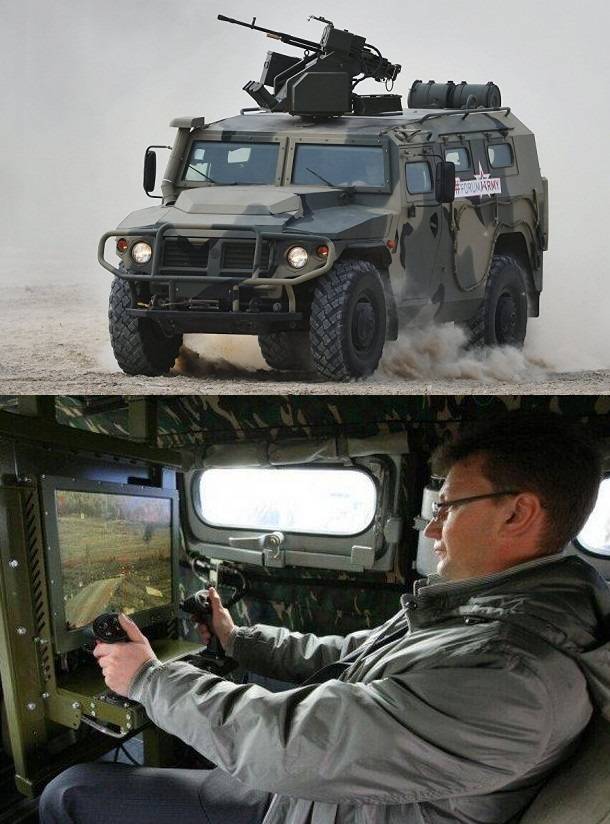 RUMB on the armored car "Tiger" 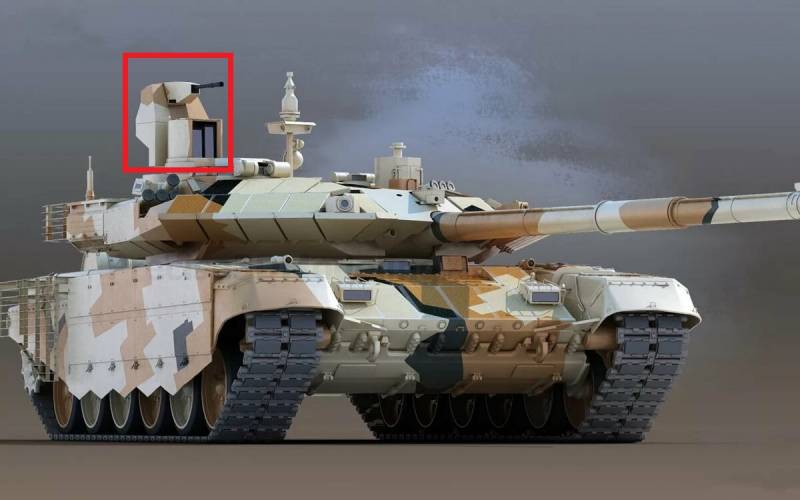 The transition from manned turret-type weaponry modules to RPMFs has significantly reduced the dimensions required to deploy weapons. As a result, on small-sized platforms, weapons previously inaccessible to them can be placed, for example, 30 mm gun on an SUV.

DUMV with a 2A72 gun of 30 mm caliber on the Tiger armored car
Also, the use of the RWMF can significantly increase the security of the shooter-operator. From a tactical point of view, the existing SLVMs are focused on the same tasks as inhabited weapons modules previously installed on armored vehicles.

One of the most effective combat units is a sniper. The use of snipers is especially relevant during local conflicts, special and counter-terrorist operations, when excessive use of force can lead to civilian casualties and the destruction of civilian residential and industrial facilities. 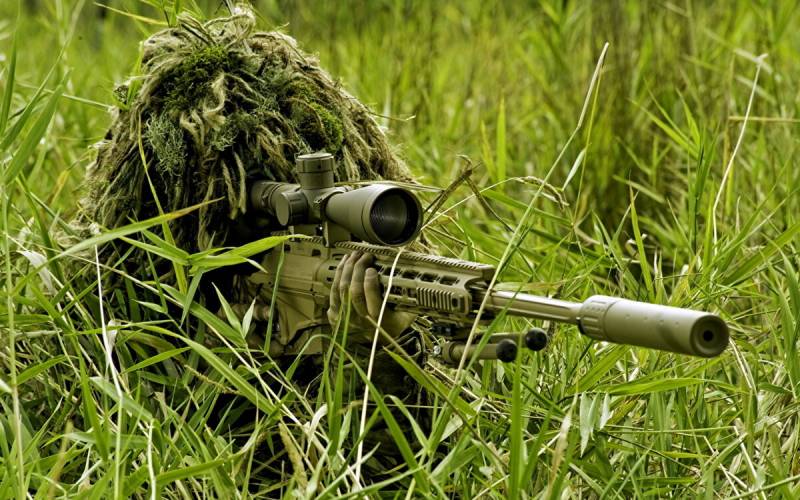 The possibility of creating remotely controlled high-precision modules may be considered. weapons (DUMVO), placed on ground platforms of various types, designed to solve special problems by special and military units.

The proposed DUMVO is designed to destroy single targets at a maximum range of about 2000 meters with minimal unmasking of the firing position. Structurally, the DUMVO will in many respects be similar to the DUVM. Guidance drives do not require high travel speeds, but increased accuracy is required. 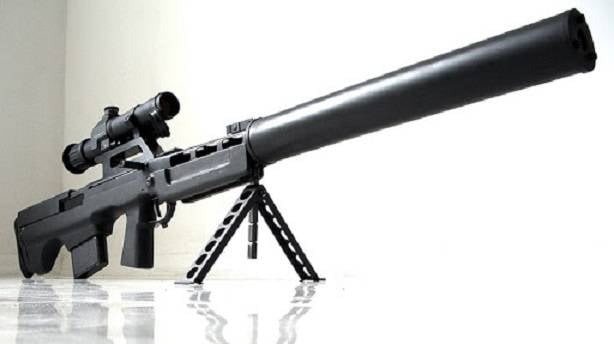 VSSK "Exhaust"
For use as part of the DUMVO, the installed rifles must be equipped with magazines of increased capacity, as well as electric drives that provide forced extraction of the cartridge in case of misfire (for VSSK "Exhaust" electric drives will provide reloading of cartridges in the normal mode). There is a possibility that the direct integration of the OSV-96 and VSSK “Exhaust” rifles into the DUMVO may not be possible. In this case, it will be necessary to develop a specialized weapon module based on these rifles, originally designed for automated work and the supply of cartridges from magazines of increased capacity of one type or another.

An optical system should be used as reconnaissance equipment, including a day channel, a night vision device and a thermal imager with a large (variable) magnification factor (of the order of x50 or more), and a laser rangefinder-target designator. 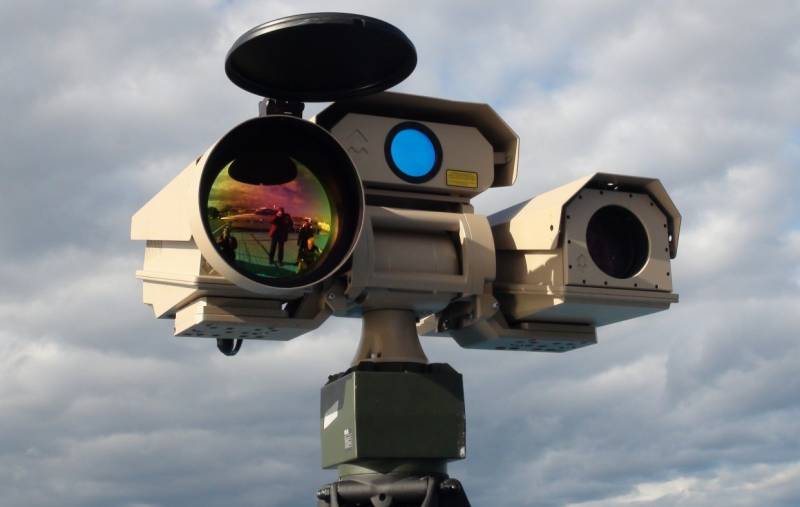 Vision detection systems operating in several wavelength ranges have the best target detection capabilities.
Perhaps reconnaissance tools should be supplemented with a sensor operating in the UV range, which allows you to effectively distinguish between certain types of targets. 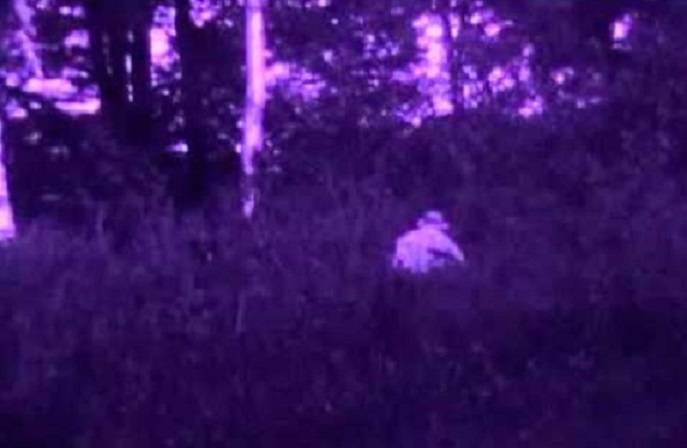 Equipment that is poorly visible in the visible range can be clearly seen in the ultraviolet wavelength range
To ensure high-precision long-range shooting, a compact weather station should be placed on the DUMVO carrier. 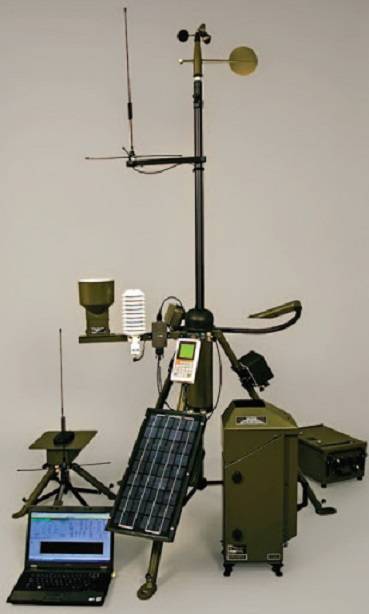 Reducing the likelihood of unmasking the firing position should be ensured by the use of silencers (both standard installed on the VSSK "Exhaust" rifle, and additionally installed on the large-caliber rifle OSV-96). Of course, the use of a silencer, coupled with supersonic cartridges will not give the same effect as when using subsonic cartridges, but, nevertheless, will significantly reduce and distort the sound of the shot, minimize the muzzle flame. For example, a silencer developed by Rotor-43 for a Kord ASVK of 12,7 x 108 mm caliber allows you to reduce the sound of a shot by 26-28 dB and practically remove the muzzle flame. 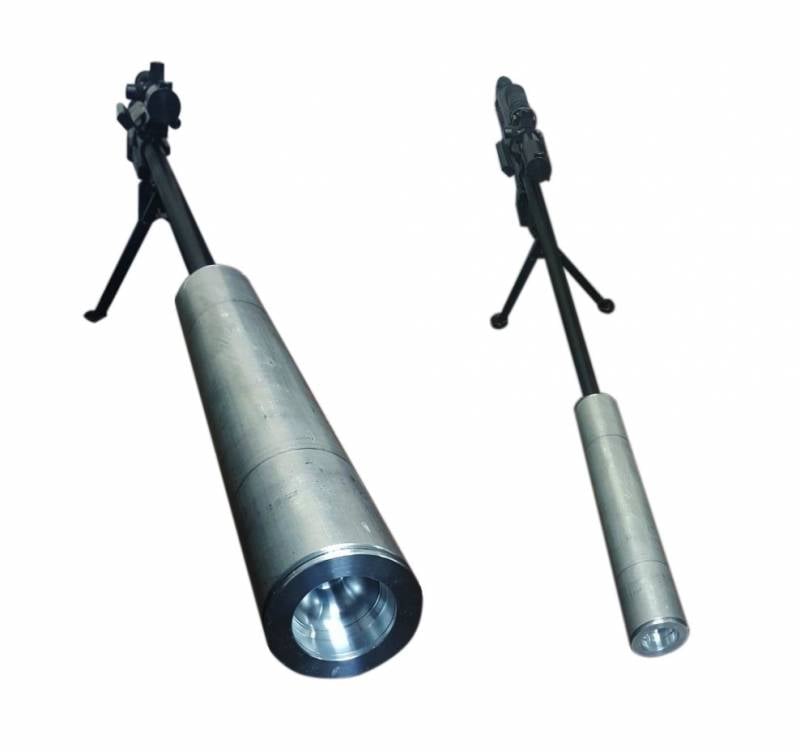 Closed-type silencer (DTK) at ASVK Kord, 12,7x108 caliber
Shooting from a large-caliber rifle ASVK "Kord" with a closed type DTK in the afternoon ...
... and at night
The decrease in visibility in the thermal part of the spectrum can be achieved by installing specialized casings on the trunks and forced blowing of the trunks, barrel casings and silencers with compressed air. In addition to reducing the likelihood of an adversary detecting heated trunks with the help of thermal imagers, this will also reduce the influence of barrel heating on firing accuracy. The supplied air can be pre-cooled by Peltier elements in the compressor, placed inside the carrier platform. 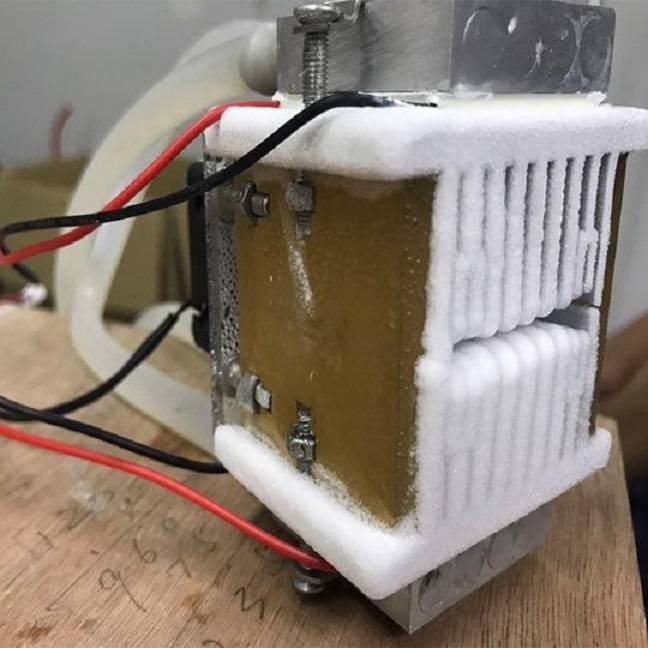 Peltier cooling system
An important element of the DUMVO should be a retractable mast, ensuring the lifting of reconnaissance and weaponry modules. The maximum mast height will be limited by the mass of equipment and weapons placed on it, as well as by the need to ensure the stability of the structure when firing. On the one hand, increasing the lifting height will increase the vibrations of the structure, on the other hand, firing will be carried out with single shots, which will simplify the design requirements. Let's not forget that light guns already have automatic guns with a caliber of up to 30 mm.

It can be assumed that, taking into account the stated limitations, the height of the lifting of the reconnaissance and armament means of the DUMVO above the carrier’s body will be about 1-2 meters. This will allow for firing from closed positions when the carrier itself will be behind natural and artificial barriers, which will significantly reduce its probability of detection and defeat by the enemy. 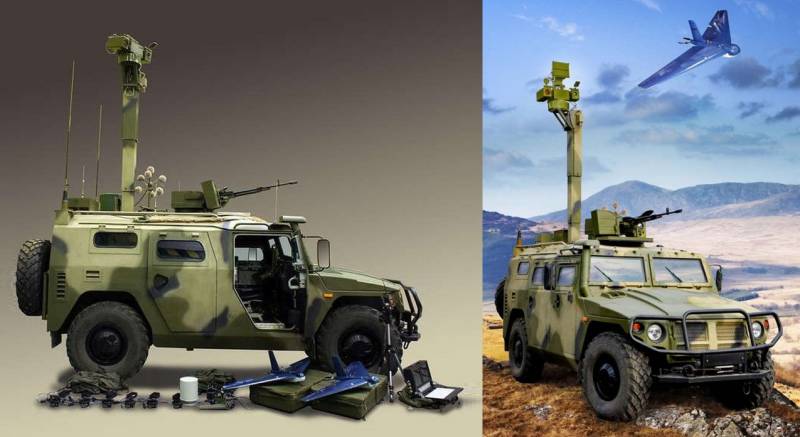 Mast with equipment on a service and combat reconnaissance vehicle (RBM) on the chassis of the Tiger armored car from the Tula company Strela NPO
To increase the fire power of the DUMVO, a larger caliber rifle, for example, 12,7 × 108 mm or the promising DXL-14,5 sniper rifle with a maximum range of 114 kilometers, announced by Lobaev Arms, can be installed instead of a 5 x 7 mm rifle. It should be noted that the ability to shoot at 7 kilometers does not obligate to shoot at this range by itself, but the very possibility of aimed shooting at a distance of 7 kilometers suggests that the defeat at shorter ranges will be more likely than with 12,7-caliber rifles. 108x408 mm or .XNUMX CheyTac, due to the higher speed and persistence of the bullet. 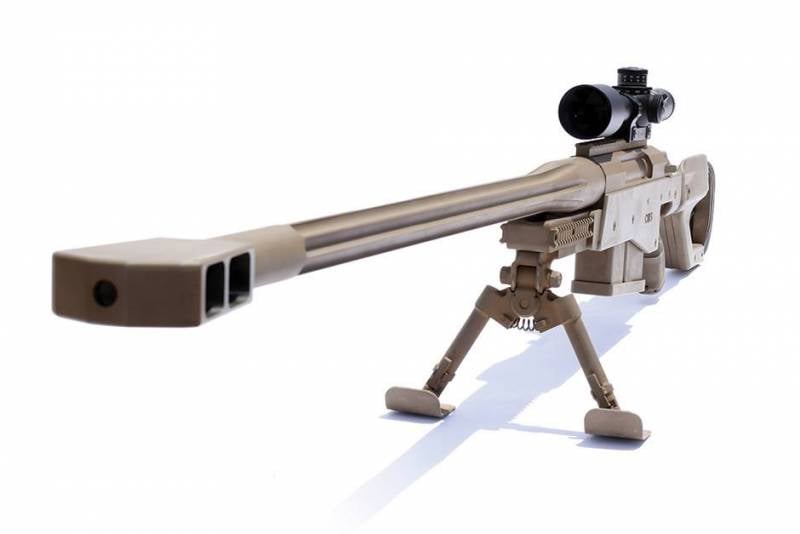 Large-caliber sniper rifle Truvelo CMS caliber 14,5 x 114 mm
The use of rifles of increased caliber is justified only if sufficient rigidity of the lifting mast is ensured.

Almost all types of ground equipment can be considered as a carrier platform. One of the advantages of using DUMVO is its increased stealth. This means that the carrier must also have minimal unmasking features. In particular, the Tiger armored car, which has already become a platform for a wide variety of weapons, or similar wheeled vehicles, may well be suitable for this role. 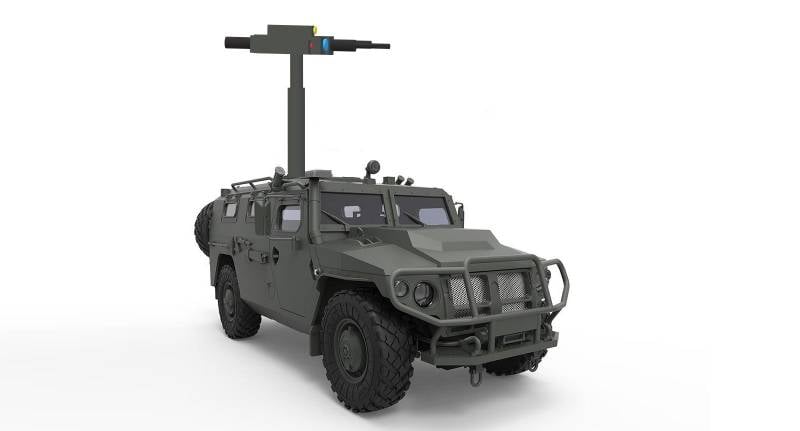 The concept of the armored car "Tiger Sniper"
DUMVO can be effectively used on other vehicles, including tracked ones, as the main or auxiliary weapon. In the case of placing the DUMVO on large platforms, they can also accommodate other weapons, for example, ATGMs. 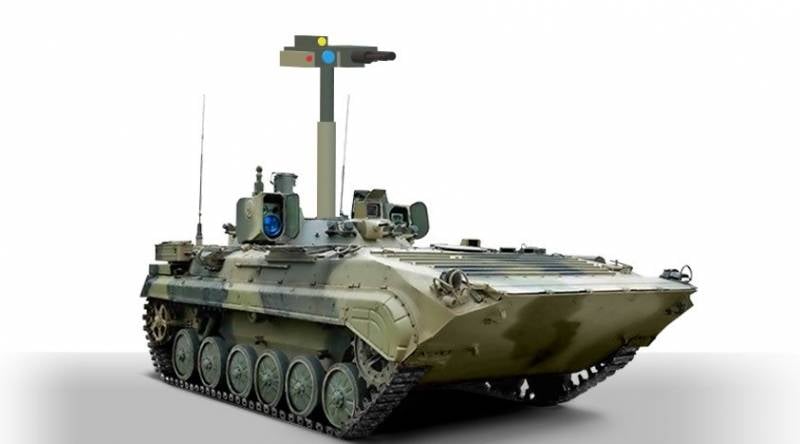 The main tasks of Tiger Sniper machines equipped with DUMVO will be defeat tasks critical goals on the battlefield: commanders, enemy snipers, ATGM calculations, defeat of lightly armored vehicles or incapacitation of critical elements (radar stations, optical instruments, weapons elements). The high penetration ability of bullets of 12,7 mm caliber or more will allow hitting the enemy’s manpower both in the open and beyond.

In local conflicts, such as the conflict in the Syrian Arab Republic, Tiger Sniper machines can block the enemy in populated areas, providing continuous demoralizing effect on the enemy with sniper fire.

When carrying out counter-terrorism operations, Tiger Sniper-type machines must ensure the destruction of terrorists with a minimal probability of civilian destruction and destruction of infrastructure.

Also, platforms equipped with DUMVO can act as reconnaissance and strike systems, providing target designation aviation and artillery, and, if necessary, ensuring the direct destruction of the enemy in case delay can be dangerous.

In principle, all these tasks can be solved by a regular sniper with a large-caliber rifle. Why, then, need a "Tiger Sniper"?

Compared to sniper arrows, Tiger Sniper machines will have the following advantages:
- high mobility: the ability to quickly change position under enemy fire;
- comfortable conditions that allow for long patrols and effective combat work;
- greater security: the armor of the carrier will protect the crew from small arms fire;
- Larger ammunition: a sniper will not take away so many large-caliber cartridges to hold a siege of a village for a long time;
- highly effective means of reconnaissance: a complex of sights of various types, capable of detecting targets at a greater distance, technical vision, simplifying the detection of targets, an advanced weather station.

Among the shortcomings can be noted the greater visibility of the carrier, but this is inevitable when it comes to comparing a person and a large machine.

Snipers and Tiger Sniper machines should not replace, but complement each other.

The question may arise: why not use the same “Tiger” to solve these problems, but with the existing SMPS, with a 12,7 mm caliber machine gun or even a 30 mm cannon?

Machines of the “Tiger-sniper” type with DUMVO should not replace similar machines with a DUMV with a 12,7 mm machine gun or a 30 mm cannon, but supplement them, work with them on the principle of a sniper pair: sniper + machine gunner.

The tactics of using Tiger-sniper machines can be as follows (for example, the conflict in the SAR).

In the event that the troops block a settlement, the Tiger Sniper vehicles with the DUMVO are advanced to positions ensuring effective fire. The positions themselves are selected based on the possibility of hiding the machine behind an obstacle with the subsequent lifting of the mast from the DUMVO. Initially, when planning a mission, several positions can be outlined that the Tiger Sniper can go away upon detection.

While in position, the Tiger Sniper detects enemy targets using the DUMVO reconnaissance equipment and defeats them with high-precision fire. In order to reduce the likelihood of detection by the enemy, the Tiger Sniper can periodically proactively change its position. Such tactics can be especially effective at night.

The second car with a fire engine based on a machine gun or a quick-fire gun guards the Tiger Sniper machine from a surprise attack from the enemy.

The creation of remotely controlled modules of high-precision weapons (DUMVO), placed on various types of ground platforms, will not require significant financial resources and can be carried out by enterprises of the military-industrial complex on an initiative basis.

Ground combat equipment with the DUMVO can be effectively used in large-scale and local military conflicts, special and counter-terrorism operations.

Ctrl Enter
Noticed oshЫbku Highlight text and press. Ctrl + Enter
We are
Totally deserted. Modules weapons in the fight against habitable towersOverview of combat night vision systems from Western manufacturers
66 comments
Information
Dear reader, to leave comments on the publication, you must to register.