“Whose spurs rang merrily ...” From the history of cavalry spurs 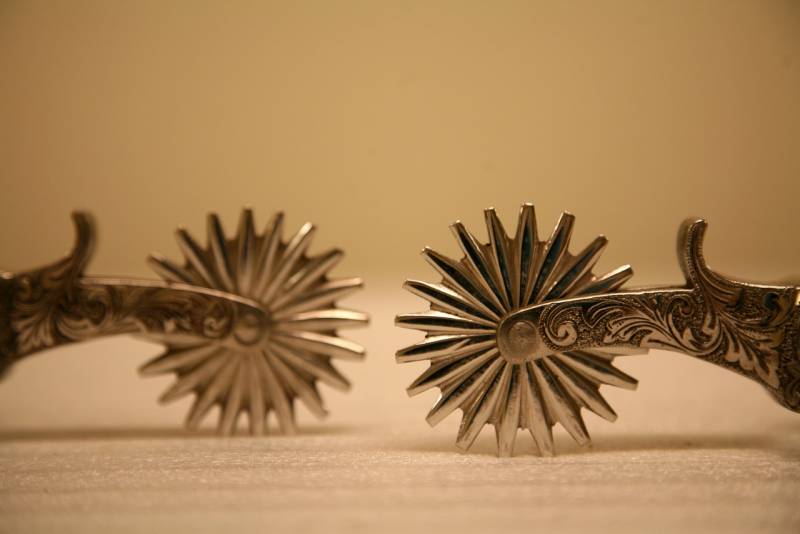 For anyone seriously interested in military history, this attribute of the horseman’s outfit is interesting, in particular, because it was he who, having gone beyond the limits of his purely utilitarian function, turned into a symbol of valor, nobility, and noble position. In the Middle Ages, the new dignity of a knight was not marked by a gilt sword or shield, but by golden spurs, which served as a distinctive sign of entering the upper class.


Spurs are a purely European notion. In the case of another subject, without which from ancient times the cavalryman was inconceivable, stirrups, disputes about the "copyright" on this wonderful invention, which at the time provided a real breakthrough in military affairs, have been going on for centuries. India, China, and many other countries claim to be the homeland of stirrups, citing their evidence. With spurs, everything is simpler: their first samples were found in burials in the north of the Balkans. For centuries, the Eastern peoples have ruled their horses with the help of a whip. By the way, in Russia, which took over much of the cavalry from the nomadic neighbors, spurs before the military reforms of Peter the Great were not very common. The Cossacks did not favor them later ... However, we will not get ahead of ourselves.

The most interesting thing is that the first points attached to the back of the rider’s shoes played a role completely opposite to that which they subsequently performed. "Spur a horse" did not mean to accelerate, but to brake it! The explanation for this fact is extremely simple: then the stirrups did not exist at that time and as soon as the horse started to set off at a faster speed, the poor horseman literally started hanging out on his back, risking flying off with extremely unpleasant consequences for himself. Accordingly, his legs, deprived of emphasis, were hanging out, inflicting very sensitive injections to the animal in the sides, forcing them to stop or at least slow down.

The Celts, ancient Germans, Iberians - all peoples for whom riding was the norm, as well as the inclusion of riders in their troops, used this invention quite actively. Initially, it was a simple spikes sharpened quite sharply. Wheel spurs, familiar to us and much more humane (from the point of view of horses), appeared, according to researchers, in about the XIII-XIV centuries. What they were, it’s clear from the name: instead of a point, an “asterisk” with points (from 4 or more) was attached to the rider’s heel, with the help of which the horse was “admonished”.

The largest spurs flaunted medieval knights - warriors of heavy cavalry. These riding equipment, worn by the riders of that time, were truly monstrous in size - up to 30 centimeters, and the “burdock” rays, of the same “star” mentioned above, were also several centimeters. The point here was not the desire to look better or richer (the knights wore gold spurs, the squires - silver), but the fact that the smaller size of this device simply did not make it possible to reach the sides of the horse, hidden under reliable armor.

Wheel spurs were indeed less unpleasant for the horses - turning around, the repeater did not allow the points to cause significant scratches and injuries to the animal. 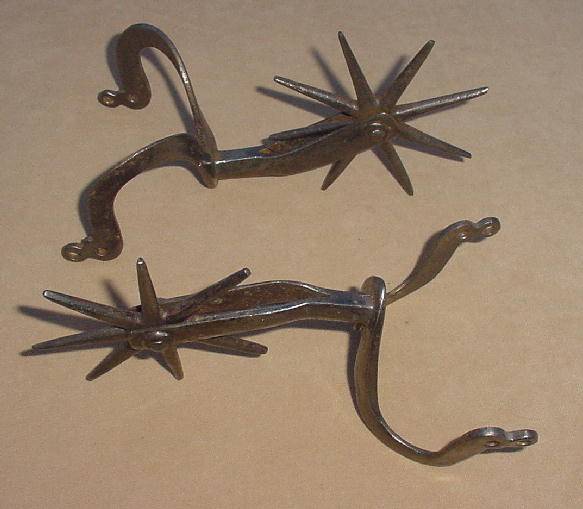 The problem was that with a long ride - on a march, especially in battle, the wheel clogged with dirt and became motionless, starting to hurt seriously. Sweat, dust, manure got into the forming wounds, and everything could end badly. It is precisely because of this that the military cavalrymen came up with a hardcroot (literally - “defender against manure”), a spur that did not have a movable wheel, but simply had a protruding part, but a blunt, without a tip. Today it is precisely such spurs, or wheeled, but with a smooth burdock, completely devoid of thorns, that are used in equestrian sport.

In the Russian Empire, the wearing of spurs has become especially widespread since the eighteenth century, when regiments of regular cavalry began to massively form - Ulan, Dragoon, Cuirassier, Hussar. Around the same time, the obligatory wearing of this attribute was prescribed to many higher court ranks of the Imperial Court. It would be unbelievable if the fashion and even the peculiar “rules of good form” did not arise on their wearing.

The memoirs of St. Petersburg officers of that time, claiming that by the sound of spurs it was easy to determine who was following you along the pavement, were preserved: a gendarme, a provincial officer or a true metropolitan guardsman whose tread is accompanied by a "soft and noble raspberry ringing." There was also a “master question” in which the master, whose products were considered unsurpassed in quality and therefore especially prestigious among the military, was Pyotr Savelyev.

In Europe, the times of chivalry, and in our Fatherland, the age of brilliant cavalry guards and hussars, have gone down in history not only under the sound of swords, sabers and swords, but also under the delightful sound of spurs of magnificent horsemen, carried away into eternity.

Ctrl Enter
Noticed oshЫbku Highlight text and press. Ctrl + Enter
We are
Chernobyl notebook. Part of 3Father told
27 comments
Information
Dear reader, to leave comments on the publication, you must to register.