Is the Crimean air defense umbrella capable of leveling the potential of B-1B missile carriers? Operation "with an eye" on the Black Sea Fleet 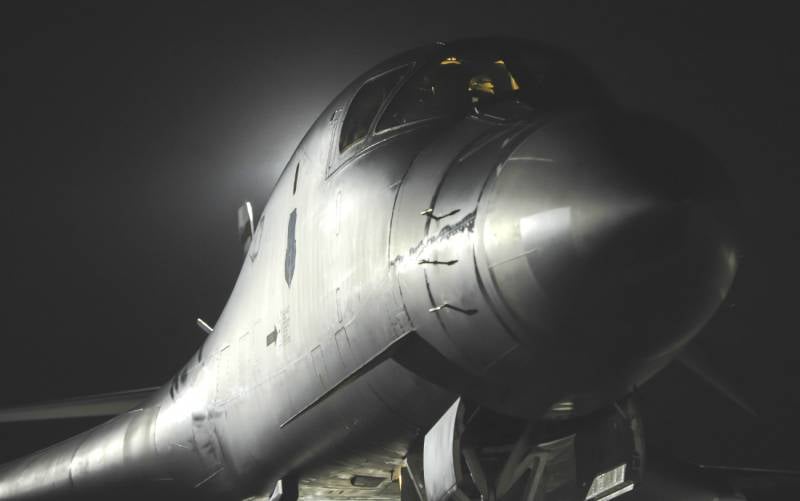 Despite the fact that a pair of strategic bomber bombers B-1B “Lancer”, flying May 29, 2020 along the western and southwestern air lines of Russia (including the western near approaches to the Republic of Crimea) and practicing the application (“digital launches” virtual models) of low-visibility tactical long-range cruise missiles AGM-158B JASSM-ER and their anti-ship version AGM-158C LRASM, was taken by Russian Su-27P fighter-interceptors and Su-30CM multi-functional fighters literally a few minutes after reaching neutral air the space above the Black Sea from the “non-occupied” airspace, an impressive number of observers-patrons of domestic military-analytical publications questioned the ability of the S-300PM2 / S-400 VKS deployed in the vicinity of Sevastopol and the S-300B4 and “S-2B3 and“ anti-aircraft missile batteries Buk-M1 / XNUMX "Russian air defense reflect a massive strike B-XNUMXB with the opinion of the above subtle means of air attack.


As the most compelling argument in favor of this opinion, the knowledgeable audience of Runet in general and Military Review in particular cited the ability of strategic missile carriers B-1B "Lancer" to launch long-range, inconspicuous cruise missiles JASSM-ER and their anti-ship analogs LRASM from ultra-low heights, overcoming Crimean anti-air / anti-missile zones of restriction and prohibition of access and the A2 / AD maneuver by hiding behind the “screen” the radio horizon from the backlight radars and guidance of the 30N6E2 / 92N6E and 9C32M families included in the S-300PM2 / S-400 and S-300V4 air defense radar architecture, respectively .

What will the VKS anti-aircraft missile forces and Russian military air defense contrast with the American B-1B missile carriers in the area of ​​the Crimean zone A2 / AD?

Indeed, at first glance, this opinion is fully true, because the range of the radio horizon for low-altitude targets (20-50 m) for 39N40E6 / 30N6E backlight radars located on 2-meter universal towers 92V6MD is only 38-50 km (excluding deployment to the towering plain terrain of the southwestern regions of the Republic of Crimea) and 95-107 km (taking into account the placement of antenna posts with the above radars on the gentle cuests of the outer western ridge of the Crimean Mountains, with a height of about 350 m). 9C32M guidance radars (not structurally adapted to be placed on 40V6M towers) and continuous-wave radars located on 15-meter lifting masts of 9A83M launchers, which are part of the S-300B4 advanced military anti-aircraft missile systems, will have a slightly lower indicator of the radio horizon.

Meanwhile, starting from the tactical and technical features of the AGM-158B / C missiles, as well as from the principles of functioning of guidance systems used in the latest modifications of the S-400 Triumph long-range anti-aircraft missile systems, as well as the S-300B4 military anti-aircraft missile systems and Buk-M3, it is not difficult to conclude that the above point of view of the audience is hardly true.

Firstly, with a range of 1200 and 800-900 km, respectively, subtle tactical JASSM-ER missiles and anti-ship long-range anti-ship missiles LRASM with practically identical mass and size parameters can be launched by B-1B strategic bomber bombers over the surface component of the Black Sea fleet in the littoral zone of Crimea and the coastal infrastructure of the Black Sea Fleet from the airspace of such countries of the North Atlantic Alliance as Turkey, Bulgaria, Romania, Hungary and Poland. At the same time, having reached the launch limits of the above missiles, the carriers (B-1B missile carriers) will still remain outside the defeat zone of even the latest S-400 Triumph modifications, whose ammunition has 48N6DM missile interceptors (intercept range 250 km), and advanced military air defense systems S-400V4, equipped with ultra-long-range anti-aircraft missiles 9M82MV (range of about 350 km). Therefore, launches can be carried out not only from the very small, but also from great heights, without entering our A2 / AD air defense zones. And this means that there can be no talk of any "early interception of carriers by ground air defense systems."

Secondly, the ammunition of the updated modifications of the S-400, S-350 Vityaz air defense systems, as well as the S-300V4 and Buk-M3 military anti-aircraft missile systems and systems are represented by promising 9M96E / E2 / DM, 9M82MV and 9M317MA anti-aircraft missiles equipped with active radar homing heads of the "Slate" family, developed within the walls of the Moscow Research Institute "Agat". Built on the basis of slot-waveguide antenna arrays with full-fledged transmitting and receiving paths, as well as having terminals for an asynchronous two-way data line, these centimeter homing heads do not need continuous illumination from the backlight and guidance radars 92N6E of S-400, 50H6A complexes of Vityaz complexes ”, As well as continuous radiation / illumination radars of the S-300V4 systems and 9C36 illumination radars of the Buk-M3 complexes.

Consequently, the above anti-aircraft missile systems and their anti-missiles are capable of intercepting the approaching JASSM-ER and LRASM tactical missiles outside the radio horizon for target designation from third-party airborne radar reconnaissance equipment (including Aircraft A-50U / A-100 DRLOiU and Bars airborne radars -R / Irbis-E ”and Н036“ Squirrel ”of multi-functional fighters of transitional and 5th generation Su-30SM / 1, Su-35S and Su-57). At this point, all myths of the audience of the Russian military-political portals about the inability of the latest versions of the S-300V / 400 and Buk air defense systems to intercept the highly accurate weapon the enemy beyond the horizon due to the curvature of the earth's surface.

Ctrl Enter
Noticed oshЫbku Highlight text and press. Ctrl + Enter
We are
High-precision JASSM in service with the Polish F-16C: an assessment of the degree of threat in the Western Highway to the beginning of 2017"Flexible" tactics of the possible use of TFR X-101 against NATO air defense outposts on European theaters. What nostalgic US Air Force?
Military Reviewin Yandex News
Military Reviewin Google News
62 comments
Information
Dear reader, to leave comments on the publication, you must to register.