But Russia not only fought with the Polovtsy: from the history of Russian-Polovtsian relations 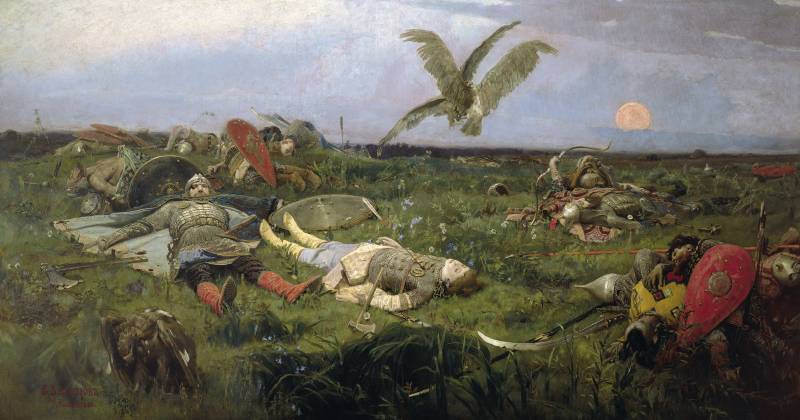 In the centuries-old stories The confrontations between Russia and the Steppe occupy a special place in the long, intricate and extremely contradictory relations of our ancestors with the nomadic people who entered the domestic chronicles under the name of Polovtsy. Russian princes not only fought with them. There were periods when not only they fought, but they were related, and even went out and went on joint campaigns against, as they say today, “third parties”. With whom and when did Rus and Polovtsy fight shoulder to shoulder?


First of all, it is worth remembering that the appearance of this tribe in the Russian territory chronicles refer to 1055. Then everything worked out: Pereyaslav Prince Vsevolod Yaroslavovich and Polovtsian Khan Bogush dispersed peacefully, patting each other on the shoulders and even exchanging "souvenirs." Problems with the aliens began a little later and very quickly took on a serious scale - at first the same Vsevolod suffered a defeat from them, and his princedom became an object of plunder, and already in 1068 the Polovtsian hordes defeated the combined army of the sons of Yaroslav the Wise on the Alta River.

It was after this tragic event that the steppe inhabitants, quite simply, became insolent to the limit and began to go to the Russian lands for production and full regularly. As a rule, these raids were quite successful: the Polovtsy warriors were very good, and follow the nomads, like the wind coming from the steppe and dissolving in it with the loot.

Moreover, after the death of Yaroslav the Wise, with the beginning of a series of princely feuds that engulfed Russia, the Polovtsy began to play the role of mercenary detachments, which some candidates for power from among the Yaroslavichi and their relatives drew into the ranks of their troops. The dubious glory of primacy in this matter is attributed to Oleg Svyatoslavich, who decided, while his uncles Izyaslav, Svyatoslav and Vsevolod share the principalities, to snatch a piece of power for themselves. Later it turned into a normal and almost universally accepted practice - it was with the military help of the Polovtsy that the relatives expelled Izyaslav Vladimirovich from Murom, and Vladimir Monomakh from Chernigov.

It was this prince who later became the one who managed to give a shortcut to the presumptuous and too much-tasted more than peculiar participation of nomads in Russian politics. As a rule, the price for engaging them in military operations was the right to bring the captured cities to fire and sword, and the Polovtsian khans were already looking at our lands with very specific interest - for resettlement. The end to such plans and generally free incursions into Russia was laid by the combined actions of the princes undertaken at the initiative of Monomakh, who switched from passive attempts to repel raids to active defense. That is, to campaigns in the Polovtsian steppes and battles against the enemy in nomadic camps.

When such expeditions were undertaken in an organized and thoughtful manner, they were invariably crowned with success. What ended the attempts of self-initiative, narrates the well-known to all of us, "The Word of Igor's Campaign." However, the events described in this work date back much later, when the nomads driven by Vladimir after his death perked up and again began to torment Russia with their raids. It didn’t even help that by this time many of her princely families had blood ties with the Polovtsy - the two sons of Monomakh were married to the steppe “princesses”, daughters and granddaughters of the khans. There were other similar precedents.

There are also cases known in history when the Polovtsy were allies of the Russian princes not in internal "showdowns", but in repelling external aggression. The most striking among them can be considered the battle on the Vagra river in the vicinity of Peremyshl, in which the warriors of the grandson of Yaroslav the Wise David Igorevich shoulder to shoulder with the soldiers of the Polovtsian Khan Bonyak defeated the army of the Hungarian King Kalman I Knizhnik many times superior to them. At the same time, a good ingenuity and coherence of different detachments was shown: fifty Polovtsy, showering the Hungarians with arrows, drove them to such a fury that they rushed to pursue the enemy headlong, it was worth starting a pre-planned “retreat”. Ultimately, this maneuver led the royal warriors into an ambush lurking in a narrow gorge, where numerical superiority no longer played any role. The losses of the Hungarian “expeditionary force” in the battle, which resulted in mass exodus and massacre, were terrible and for a long time discouraged going to Russia.

According to many scholars, it was the fairly close military-political union of the Polovtsy and some Russian princes that had formed by the XNUMXth century that led the latter to the shores of Kalka, in which they, to this day not encountering the Mongol conquerors moving from the East, entered into to support their Polovtsian associates and relatives. By virtue of this, some even try to blame the Polovtsy for the ensuing enemy invasion. It is rather doubtful: it is unlikely that the Batu hordes would have bypassed the richest lands of Russia that lay in their way. However, this is a completely different story. The main thing is that the Russian people survived the confrontation with the Golden Horde. But the Polovtsian - no ... Although the Polovtsian assimilation is also a separate issue.

Author:
Alexander Kharaluzhny
Photos used:
Wikipedia / Picture of Vasnetsov V. M. "After the Battle of Igor Svyatoslavich with the Polovtsy"

Ctrl Enter
Noticed oshЫbku Highlight text and press. Ctrl + Enter
We are
The myth of the "Mongol-Tatar" invasionRussian allies of Mongolo-Tatars
Military Reviewin Yandex News
Military Reviewin Google News
117 comments
Information
Dear reader, to leave comments on the publication, you must sign in.