Great future and long life for the Yak-152 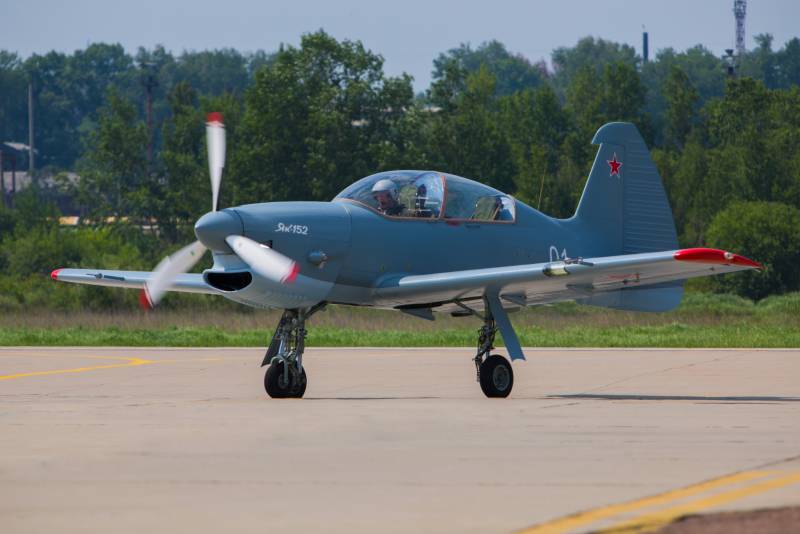 In the interests of the aerospace forces of Russia, a promising training aircraft for the initial flight training of the Yak-152 has been developed. Currently, this machine is being tested, and in the foreseeable future will be able to enter the army. Over time, the Yak-152 will become the main example of its class in our training system for flight personnel.

"Bird" for the Air Force

The development of the future Yak-152 TCB began in 2014 as part of the design and development work with the code “Bird-Air Force”. Design was carried out in OKB. Yakovleva (part of the NPK "Irkut") and took the minimum time. Already in the summer of 2016, the Irkutsk Aircraft Plant built the first prototype aircraft, and on September 29 it made its first flight. Since then, flight design tests have been ongoing, and the state is expected to begin soon.

The machine has a one-wing straight wing with retractable flaps and ailerons, providing high takeoff and landing and maneuverability. The reinforced three-point landing gear allows the aircraft to be operated both on concrete and unpaved airfields. 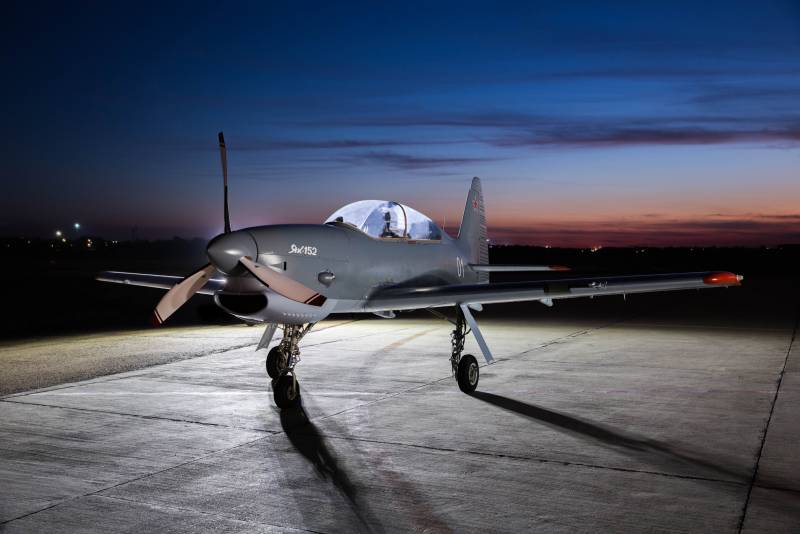 The TCB is equipped with a 03 hp RED A500T diesel engine using aviation kerosene. The motor is connected to a variable pitch propeller MVT-9. The engine was developed by a German company, but licensed production at the Russian site has already been established, which removes dependence on imports.

Two pilots, a cadet and an instructor, are located in the cockpit of the tandem layout with a full range of necessary equipment. Provided for "fighter" controls; The dashboard is based on LCD screens. Avionics is unified with the Yak-130 and ensures the creation of a single educational complex. In case of accidents there is an ejection system SKS-94M.

Aircraft can be stored inside hangars and beyond. Measures are provided to simplify access to devices and assemblies, which facilitates maintenance of equipment. The declared resource is at least 10 thousand hours, 30 years and 30 thousand landings.

The media also reported that in the near future two more experimental aircraft should appear, which will speed up the necessary tests. A year ago, at the end of May, it became known that NPK Irkut completed the fifth prototype Yak-152, and also continues to assemble the sixth. Information on the completion of the sixth machine has not yet been received, but may appear at any time. 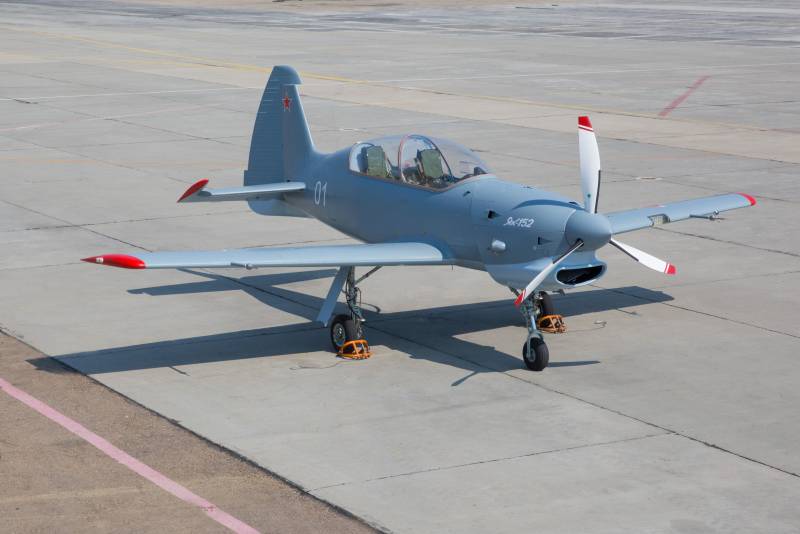 According to reports, the Yak-152 project is still at the stage of flight design tests. Three flight prototypes carry out the established program for verifying the operation of individual units and systems, determining flight and maneuvering characteristics in different modes, etc. Static tests of the airframe ended in 2018 with a conclusion on compliance with the declared characteristics.

Upon completion of the current phase of testing, the aircraft will go to the state. The timing of their start has not yet been specified. The presence of a significant number of experimental machines and the duration of the current work suggest that they will begin in the near future. Based on the results of state tests, the issue of accepting for supply and launching mass production will be finally resolved.

At the moment, there are only five experimental Yak-152 for various purposes, but in the future the number of such equipment will increase sharply. A few years ago it became known that there were plans for mass production in large volumes - in the interests of the aerospace forces and other structures.

Back in 2015, the leadership of the Ministry of Defense announced their intention to acquire 150 light fusion vehicles of the Yak-152 type. Soon, the DOSAAF Aviation Department announced the possible purchase of 105 aircraft. Later, in June 2016, when the construction of the first prototypes was still being completed, the leadership of the Irkutsk aircraft plant announced that it had received an order from the Ministry of Defense for 150 aircraft. 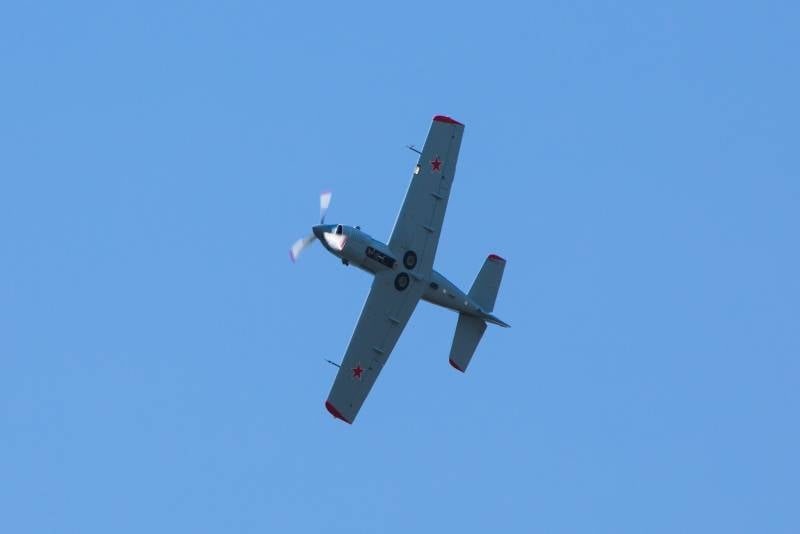 In October 2018, domestic media reported an expansion of plans for promising TCBs. With reference to sources in the Ministry of Defense it was reported about the possible purchase of 230 aircraft in a few years. However, the type of machines planned for the order was not specified - it will be determined after state tests of the Yak-152. The competitor of the Russian TCB in the fight for a future contract was called the Austrian-made Diamond DART-550.

Apparently, the Ministry of Defense is only working on plans for the Yak-152. Final conclusions will be made based on the results of the expected state tests, and only then will a firm contract appear. Moreover, it is already clear that for the needs of the aerospace forces significant quantities of equipment are required - at least 150 units.

There is interest from DOSAAF - this organization can mark up a very large order. The Yak-152 aircraft is regularly shown at aviation exhibitions, where it can attract the attention of foreign buyers. However, so far there have been no reports of possible exports.

Until recently, front-line aviation pilots undergo initial training on jet fighters L-39, after which they master the training modifications of combat aircraft. At the same time, a training system restructuring program is being implemented, aimed at replacing obsolete designs. 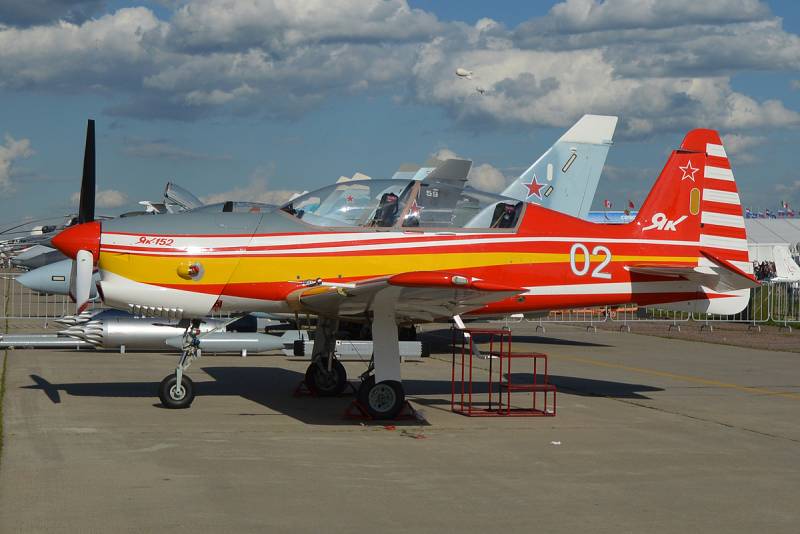 The second prototype aircraft
The current modernization is based on the introduction of the modern Yak-130 TCB. Initial training is now carried out using the L-39, and the basic and advanced are carried out using the new Yak-130. In the future, it is proposed to abandon the obsolete L-39 in favor of new initial training machines - it is for this niche that the promising Yak-152 is being developed.

According to Irkut, the Yak-152 allows you to solve all the problems of the initial training of the cadet: to teach the technique of piloting and navigation, including in difficult conditions, prepare for flights as part of a group, etc. With sufficiently high flight and maneuvering data, the aircraft is simple and forgives mistakes typical of beginners.

The most important feature of the Yak-152 is a partial unification of equipment with a more "advanced" Yak-130. These two TCBs form a training complex that can provide the entire pilot training cycle. Having mastered simple tasks on a piston Yak-152, a cadet will be able to switch to a jet Yak-130, fully simulating combat aircraft.

There is every reason to believe that the Yak-152 has a great future. In the coming years, such equipment will go into series, get to schools and begin to provide training for future front-line aviation pilots. Given the stated operating life, it can be expected that the Yak-152 will remain in service in the second half of the XXI century.

However, for a great future, you need to deal with an important present. Several experimental aircraft undergo flight design tests and have not yet passed to the state stage. All such activities take time, which affects the timing of the start of service. Nevertheless, the customer and the developer are optimistic and are making the most ambitious plans for the future. Obviously, the Yak-152 will succeed, and this is only a matter of time.