Ultra-small submarines of the Triton family

In 1957, work began in our country to create the so-called group submarine carriers - ultra-small submarines (SMPL) of the Triton family. This technique was intended for combat swimmers and was supposed to provide patrol, reconnaissance and sabotage operations, etc. For several years, within the framework of this family, three types of equipment have been created.

History of the Triton family begins in 1957, when the specialized research institutes of the Ministry of Defense began to study the appearance of promising means of transport for divers. In April of the following year, the Leningrad TsKB-50 received an order to create a carrier for divers “NV”. Already in August on the Caspian Sea the tests of the experimental “NV” were carried out, according to which the project was continued. Then the code "Triton" appeared.

Tests and refinement of the Triton continued until the end of 1959, after which it was adopted and put into serial production. Quite quickly, the NV Triton arrived at the disposal of the special units of all fleets and were mastered by personnel. During various exercises, combat swimmers repeatedly showed all the advantages of such a technique. It facilitated patrolling, access to a given area with cargo, etc. 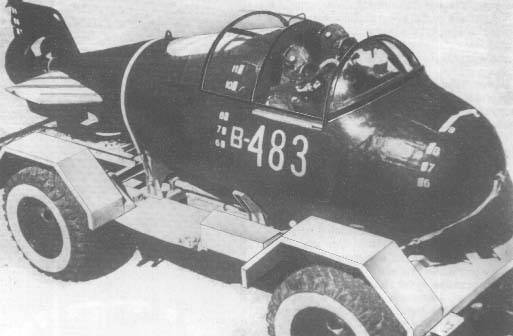 Triton-1M on land. Photo Russianarms.ru
The Triton was distinguished by the extreme simplicity of its design. It had a cylindrical lightweight housing with sealed bow and stern compartments. In the bow was the battery of T-7 batteries, in the stern there was a 2 hp electric motor. with screw in rotary ring nozzle. The central compartment was designed for two divers in wetsuits and scuba gear. The compartment was made “wet” and covered with a light transparent lantern.

The length of the Triton was 5,5 m with a diameter of 700 mm. Weight - 750 kg. Underwater speed did not exceed 2,3-2,5 knots, range - 8-10 nautical miles. The depth of immersion was limited to 35-40 m and depended on the physical capabilities of divers. A new type of SMPL / HB could deliver two divers and small loads, such as mines for sabotage, to a given area.

A new stage of work began in 1966 and was carried out at the Volna Central Design Bureau. Their first leader was J.E. Evgrafov. At the same time, two projects were being developed - “907” and “908” with different technical features and capabilities. They were implemented and brought to production almost simultaneously.

A draft version of pr. 907 Triton-1M was ready in 1968. The technical project was completed in 1970, after which the Leningrad Novo-Admiralty Plant (now Admiralty Shipyards) began construction of the lead boat. Tests of the new SMPL started in 1972 and lasted several months. After that, the plant received an order for serial construction. The Navy wished to receive 32 units of new equipment. 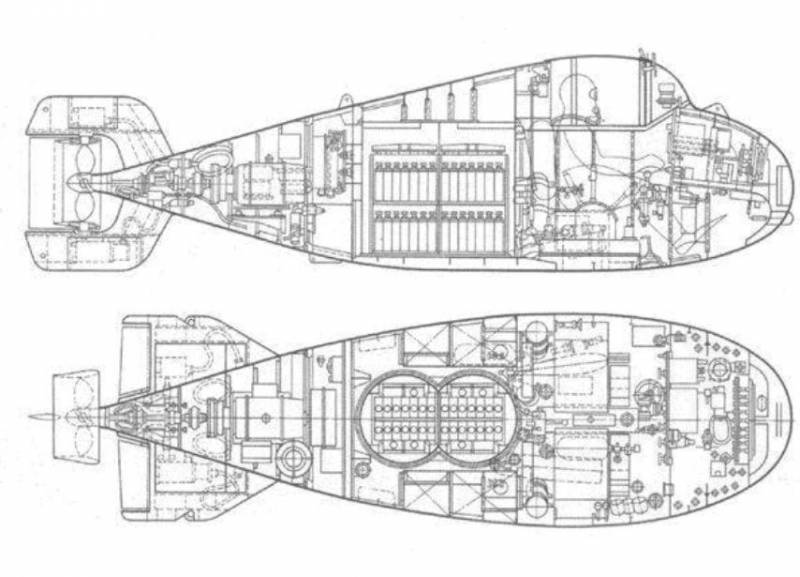 The scheme of the submarine. Figure Russianarms.ru
The Triton-1M boat was built in a drop-shaped, fragile hull, divided into compartments for various purposes. The bow of the hull housed a two-seater cabin for wet-type divers, covered by a transparent lantern. The crew had at their disposal the MGV-3 sonar station, navigation aids, a heading automatic and a radio station.

The central sealed compartment contained the SC-300 silver-zinc batteries; in the "dry" feed installed P32M electric motor with a capacity of 4,6 hp The engine rotated the screw in a rotary ring nozzle, which provided directional control.

The SMPL with a length of 5 m and a width / height of less than 1,4 m had a total displacement of 3,7 tons. A low-power engine provided acceleration to 6 knots, batteries gave a range of 35 miles. The immersion depth remained at the level of 40 m. Autonomy during operation was limited to 7,5 hours. If necessary, Triton-1M could remain on the ground for up to 10 days, and then continue to move.

Together with Triton-1M, a larger underwater vehicle, project 908 Triton-2, was created at Volna Central Design Bureau. Due to the increased size, he had to transport a larger number of swimmers. In addition, it was possible to obtain higher driving characteristics and other advantages over smaller large submarines. 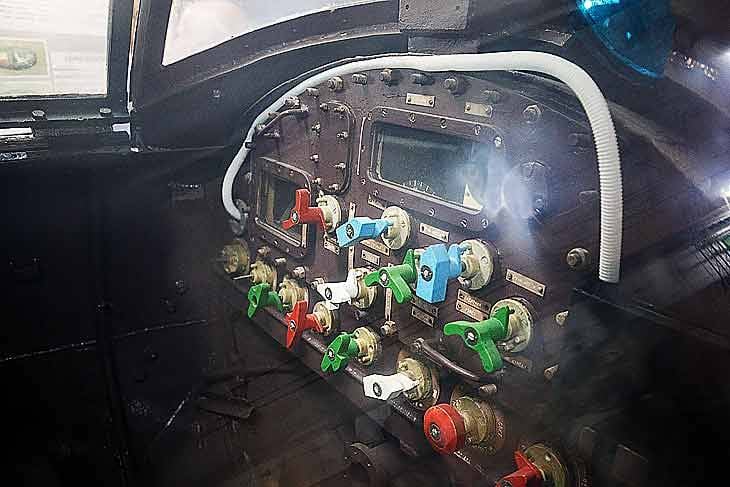 Dashboard in the cockpit. Photo Zonwar.ru
A prototype of the future Triton-2 was built in 1969 at the Krasny Metallist factory. Design work was completed in 1970, and the next 1971-m full documentation went to the Novo-Admiralty Plant. A larger and more complex submarine was built long enough, the tests began only in 1974. After their completion, mass production began.

“Triton-2” outwardly looked like a “regular” submarine: a light hull of greater elongation with a pronounced superstructure and a small wheelhouse was provided. The bow compartment of the hull with the crew post was solid, and a sealed instrument compartment with a battery pit was placed behind it. The stern was given under a strong compartment for divers and a volume for an electric motor.

An interesting feature of pr. 908 was the availability of durable airtight compartments for divers. The bow compartment was the cockpit and accommodated two people with equipment, there were four places in the stern. Two cabs when immersed were filled with water and sealed. Regardless of the depth of immersion, divers experienced a constant minimum pressure. Hatches in the upper part allowed to leave the boat and return on board. The crew had at their disposal sonar stations MGV-11 and MGV-6V, as well as a navigation complex with the necessary instruments.

In 1958, plant No. 3 in Gatchina built two experimental Tritons of the first version. In 1960, the first serial boat was laid. The construction of the series continued until 1964. A total of 18 units were collected. technicians, including prototypes. They were transferred to the customer in 1961-65.

A few years later, construction began on improved SMPLs, pr. 907. The first two Triton-1Ms became part of the USSR Navy on June 30, 1973. Then there was a break, after which mass construction began, with regular delivery of equipment to the customer, and in significant quantities. So, in December 1975 the fleet immediately transferred seven submarines.

The construction of the SMPL pr. 907 continued until mid-1980. In August, the customer accepted the last batch of six units. In total, 32 Triton-1M were built. The boats went to serve as part of all the main fleets of the USSR Navy. They were assigned board numbers of the type "V-482", "V-526", etc., without continuous numbering.

Scheme of the boat, pr. 908. 1 - engine compartment; 2 - aft cabin; 3 - batteries; 4 - instrument compartment; 5 - crew cabin; 6 - systems management; 7 - sonar station. Figure Russianarms.ru
The head Triton-2 was completed in 1972, and the tests continued until 1975. Checks and refinement took a lot of time, because of which the next SMPL was launched only in 1979. A year later, it replenished the fleet. In 1980-85 a dozen boats left the slipway. Finished products were taken in pairs; appropriate events were held irregularly, with intervals of several months.

In total, 13 SMPLs were built, pr. 908 - one head and 12 serial. Having entered the composition of all the main fleets, the boats received side numbers from B-485 to B-554. The numbering was again not continuous, and the ranges of SMPL numbers of two types overlapped.

Tritons in the service

The ultra-small submarines of the three projects were intended to transport combat swimmers - in order to ensure the solution of a wide range of tasks. Using this technique, divers had to patrol the protected water areas of ports and raids, protect the areas from enemy combat swimmers, conduct a survey of the seabed and provide maintenance for underwater structures. In addition, the Tritons could be used in reconnaissance and sabotage operations for the delivery and evacuation of personnel.

Depending on the nature of the operation, the Tritons could operate independently or with a carrier vessel. In the first case, only work was provided near the basing point, and the carrier could deliver SMPL to any given area. 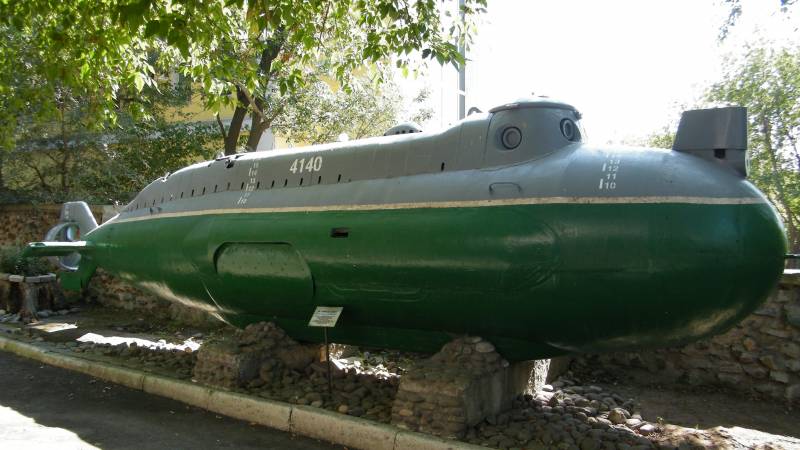 The submarine is a monument in the city of Vladivostok. Wikimedia Commons Photos
Unfortunately, due to the special nature of the service of combat swimmers and their equipment, there are no detailed information on the operation of the Triton SMPL, as well as pr.907 and 908. One can only assume that such equipment did not stand idle and was constantly operated - primarily in order to protect water areas.

According to known data, the active operation of the Triton boats continued until the mid-seventies, when newer and more successful models appeared. The direct replacement for them was the Triton-1M SMPL. They remained in service until the turn of the eighties and nineties. During this period, due to the development of a resource and a lack of finances, the fleet was forced to write off all or almost all such SMPLs. However, according to some reports, individual copies continued to serve almost until the two thousandths. "Tritons-1M" could remain in the fleets of Russia, Ukraine and Azerbaijan.

Triton-2 was used longer, until the late nineties. However, the specific situation in the armed forces and the development of the resource did their job, and the boats had to be decommissioned. It is not ruled out that individual SMPLs can be retained as part of the fleets of the three countries, although this is unlikely.

An updated version of pr. 907. Graphics SPMBM "Malachite" / malachite-spb.ru
As far as we know, the carriers of the Triton divers have not survived. Most of the decommissioned nuclear submarines Triton-1M also went for disposal, but at least 7 survived, now they are monuments or in museums. Perhaps in the future the number of such samples will increase. Also 5 items became exhibits and monuments. "Triton-2." Some of the monument boats are available to the public, others are in closed areas.

In 1974, Volna Central Design Bureau became part of the newly formed SMBM Malachite, and this organization was engaged in the design support of the Tritons of two types. In recent times, "Malachite" continued the development of the direction and offers customers two options for the modernized SMPL.

The modern project 09070 "Triton-1" provides for the refinement of the base pr. 907 with the restructuring of the original design and the use of modern components. In particular, more compact batteries and an electric motor were used. An improved version of the boat, project 09080 Triton-2, is distinguished by a different layout of the battery and inhabited compartments, as well as the use of modern units.

Development Option pr. 908. Graphics SPMBM "Malachite" / malachite-spb.ru
Materials on the new pr. 09070 and 09080 regularly appeared at various exhibitions, but there is no information about real orders. Most likely, the SMPL does not attract the attention of potential buyers.

Although the Tritons of the first three projects were decommissioned and mostly disposed of, the special units of the Navy were not left without special equipment. At the beginning of the last decade, a new submersible carrier boat for divers, project 21310 Triton-NN, developed by the Lazurit Design Bureau, entered service. Unlike its predecessors, it combines the qualities of a submarine and a high-speed surface vessel. In addition, the boat carries a set of various modern equipment. Thus, the development of the direction of carriers of divers / ultra-small submarines continues, but now it is based on fundamentally new ideas.

Ctrl Enter
Noticed oshЫbku Highlight text and press. Ctrl + Enter
We are
Boats go around the earthThe long road to the "Triton" How to create a super-small submarine — transporter of combat swimmers "Triton-1M"
Military Reviewin Yandex News
Military Reviewin Google News
43 comments
Information
Dear reader, to leave comments on the publication, you must sign in.