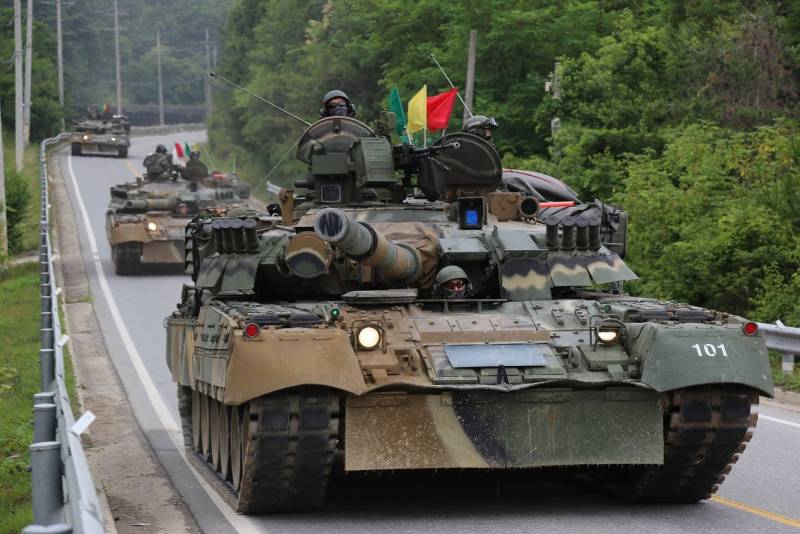 Soviet and Russian armored combat vehicles were exported to many countries around the world, and some of these shipments are of particular interest. For example, in the nineties, an agreement was signed on the supply of tanks, infantry fighting vehicles, armored personnel carriers and various weapons for the South Korean army. He appeared for specific reasons and had curious consequences.

Despite belonging to different political and military “camps,” the USSR and the Republic of Korea from a certain time developed economic relations and conducted mutually beneficial trade. However, later the situation changed, problems began, and by the time of the collapse of the USSR Seoul owed approx. 1,5 billion US dollars.

Soviet debt was the subject of Korean-Russian negotiations, which began shortly after the collapse of the country. At that time, independent Russia could not pay the full amount in money, and it was proposed to pay for military products. Seoul was offered to select certain samples for the agreed amount - with delivery from the presence of the Russian army.

South Korea initially reacted to such a proposal without enthusiasm. Over the course of several decades, she maintained a profitable military-technical cooperation with the United States, and the receipt of Soviet / Russian equipment did not comply with this policy. In addition to political issues, there were technical ones. Russian armored vehicles and armaments would have to be integrated into control circuits created by American standards. 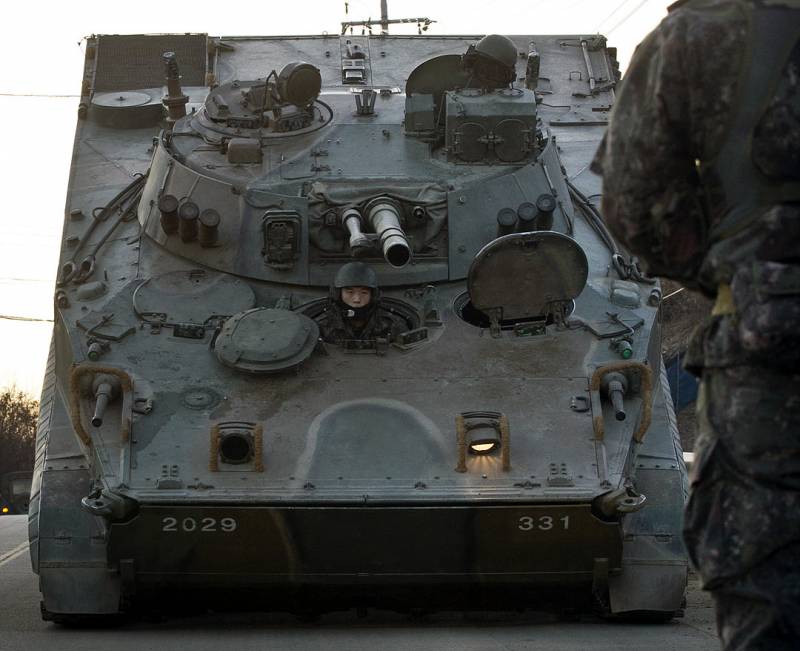 BMP-3 South Korean army. Photo Southkoreanmilitary.blogspot.com
However, the Russian proposal had good prospects. Due to the existing debt, it was possible to obtain the most modern models from a leading manufacturer. In addition, the armored vehicles available to order differed favorably from those in the South Korean army.

The military and political leadership of South Korea weighed all the arguments, and decided that the Russian proposal was worth attention. The necessary bilateral consultations were held, and in 1994 an agreement was signed on the partial repayment of Soviet debt by supplying military products. According to his terms, Russia was supposed to transfer a diverse range of products, and the Republic of Korea wrote off half of its debts.

Under the agreement, the Korean army was to receive 33 main battle tanks T-80U in a linear configuration. Also ordered 2 commander T-80UK. In the interests of motorized infantry, 33 BMP-3 infantry fighting vehicles and the same number of BTR-80A armored personnel carriers were purchased. Together with armored vehicles, the order included more than a thousand 9K115 Metis anti-tank missile systems and several dozen Igla portable anti-aircraft missile systems. Armaments and equipment should have been transferred over the next few years.

The first Soviet-made MBT and IFVs went to South Korea in 1996 in the amount of several pieces. The next year, the pace of supply increased, and the customer has already received several dozen armored vehicles, as well as part of the missile weapons. Soon new parties arrived, and by the end of the decade the treaty was fully implemented. 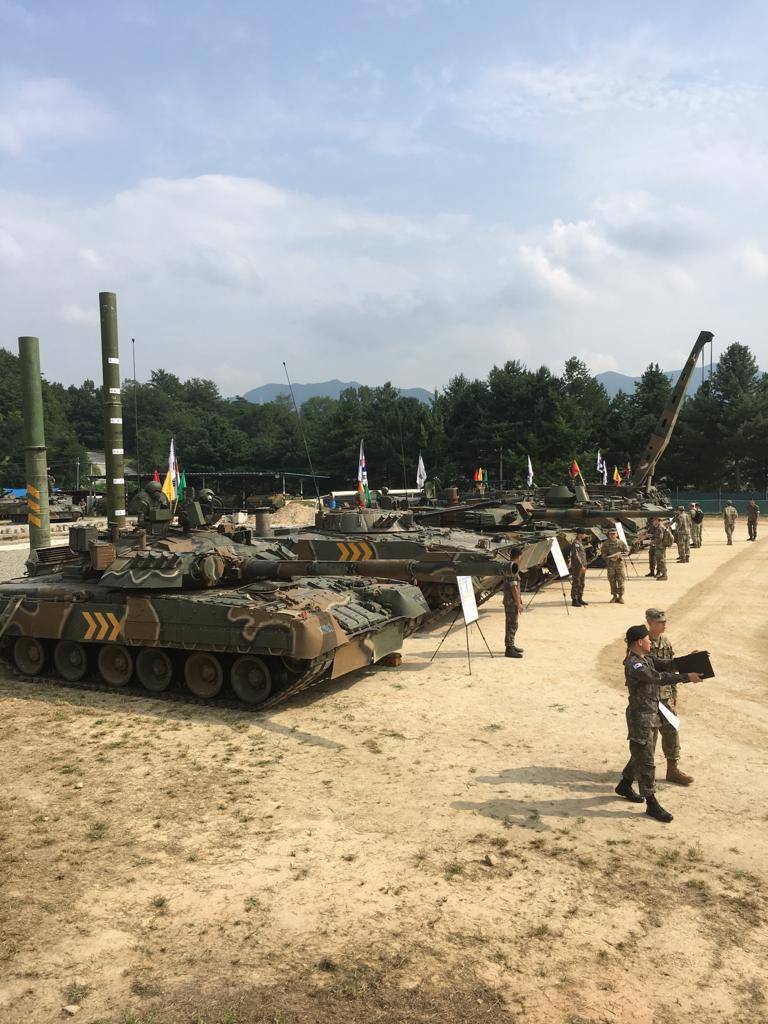 T-80U during exercises, 2019 Photo by Bmpd.livejournal.com
As new equipment arrived, South Korean troops mastered it and gained the necessary experience. Tanks and infantry fighting vehicles showed themselves well in tests and in service, as a result of which the Korean Ministry of Defense wished to acquire new vehicles of two types. However, armored personnel carriers were not included in the new contract.

The second agreement on the repayment of debt by armored vehicles appeared in 2002 and was implemented until 2005. With its help, the total number of MBT increased to 80 units; infantry fighting vehicles - 70. It was possible to rearm several new units and significantly increase the combat effectiveness of the army.

At the time of signing the contract, the state of the South Korean armored vehicle fleet left much to be desired. The basis of the tank units were American M48, which went through several upgrades. Since the late eighties, its own MBT K1 has been produced. Getting a few dozen Russian T-80Us dramatically changed the appearance and capabilities of the army.

The fact is that in all basic characteristics the T-80U was superior to the Korean K1, not to mention the older models. It had a powerful anti-ballistic reservation, and the gas turbine engine provided better mobility - with lower economy. The most important argument in favor of the T-80U was a 125-mm gun with modern ammunition and controls for that period. 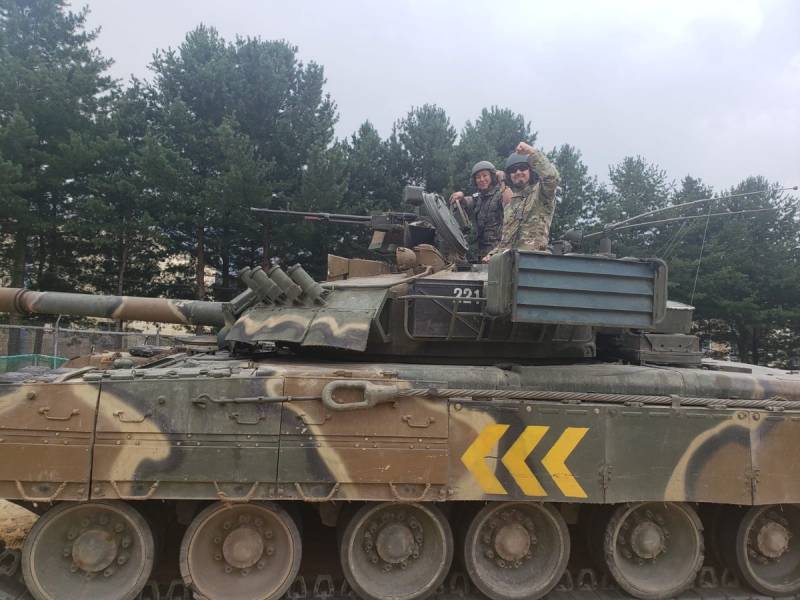 Tank at the joint US-Korean exercises. It seems that the American tanker is satisfied with Russian equipment. Photo Bmpd.livejournal.com
The main means of transporting infantry in the early nineties were M113 armored personnel carriers of American and local production. Also continued production of its own K200 with higher performance. However, both of these samples in all major parameters lost to the Russian BMP-3. The latter had advantages in defense, mobility and weapons.

BTR-80A became the first wheeled armored personnel carrier in service with South Korea. This machine had certain advantages over the available equipment, but according to other characteristics, at least, did not differ from it. BTR-80A received mixed ratings, which is why supplies were limited to a single batch.

In the field of missile weapons, similar phenomena were observed. Not the newest American models were in service with South Korea, and modern Russian systems favorably differed from them.

Thus, thanks to two agreements with Russia, the South Korean army was able to improve the overall appearance of its ground forces. She received more advanced tanks and infantry fighting vehicles, which favorably differed from the existing equipment. On the other hand, by 2005, a little more than one and a half hundred vehicles had been received - one could not count on complete re-equipment with all the desired consequences.

Joint work of the tank and infantry fighting vehicles. Photo by the Ministry of Defense of the Republic of Kazakhstan
However, over time, the situation began to change. South Korea continued to manufacture its own equipment. In parallel, projects were developed to modernize existing models, as well as completely new programs. When creating them, among other things, the operating experience of Russian infantry fighting vehicles and MBT was taken into account.

To date, all these processes have led to the emergence of several improved versions of MBT K1 and BMP K200. In addition, the latest K2 and K21 IFV tanks have been put in a series. Modern models in terms of performance surpass the old Soviet / Russian cars and take away the title of the most advanced equipment of the Korean army.

Against the background of all these processes, the T-80U and BMP-3 continued to serve in their original form. South Korean industry was able to master the production of individual components for small and medium-sized repairs, but more complex activities, including modernization was possible only with the help of Russia. For reasons of economy and political expediency, such measures were abandoned, and the armored vehicles retained their original appearance.

Currently, the South Korean army has approx. 80 T-80U tanks, up to 70 BMP-3 and a total of 20 BTR-80A. All these armored vehicles belong to the 3rd tank brigade of ground forces. The tanks were combined into two battalions of 40 units each, infantry fighting vehicles and armored personnel carriers were similarly distributed. 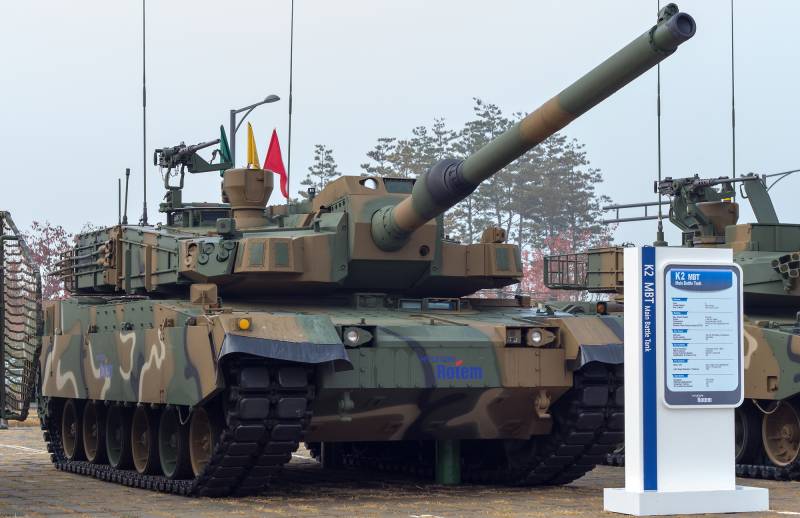 MBT K2 - the most modern example of the South Korean army. Before him, the T-80U was the most perfect. Wikimedia Commons Photos
Unlike their own Korean developments, Russian armored vehicles are not being modernized. To date, it is morally obsolete, because of which it cannot fully compete with local products. As a result, the long-term plans of the command provide for the gradual abandonment of Russian technology, as the supply of domestic products.

In 2016, Russian media reported on the upcoming Russian-Korean agreement, according to which tanks and infantry fighting vehicles would return to their homeland. It was reported that the evaluation of the equipment was completed and the contract was about to appear. It was proposed that the purchased armored vehicles be repaired and put into operation or put into service for spare parts. However, this topic has not been developed. No new messages about the transfer of used cars have been received.

It is very likely that in the coming years South Korea will continue to operate Soviet / Russian armored vehicles, but will not upgrade or replace it with similar imported models. As the resource is depleted, the machines will be decommissioned and disposed of. Also, the possibility of resale to third countries cannot be ruled out. The purchase of new Russian tanks and armored vehicles is virtually eliminated.

South Korea for a long time headed for the independent construction and development of armored vehicles. Under such conditions, the T-80U / UK, BMP-3 and BTR-80A have no particular prospects. No one plans to write them off right now, but their future no longer raises questions. One of the most interesting stories of military-technical cooperation of recent decades is coming to an end.

Ctrl Enter
Noticed oshЫbku Highlight text and press. Ctrl + Enter
We are
On the issue of competitiveness in the marketT-80 - 35 years in service
Military Reviewin Yandex News
Military Reviewin Google News
32 comments
Information
Dear reader, to leave comments on the publication, you must sign in.