How to be a Nazi general and survive until the 1980s: from the biographies of the command of the Third Reich 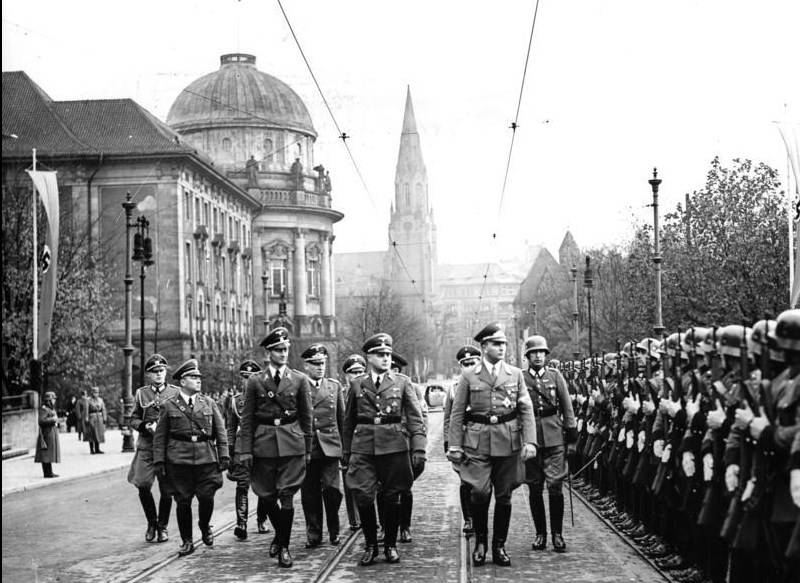 Many German generals and senior officers who participated in the Second World War as part of the Wehrmacht and SS troops successfully survived wartime and either did not suffer any punishment or escaped with short prison sentences. Some of them were fortunate enough to live nearly half a century after the war. The story of how to be a Nazi general and ... survive to the 1980s.


Among the Nazi leaders of the "first echelon", Albert Speer and Rudolf Hess were the most long-livers. The beloved architect of Adolf Hitler and the Reich Minister of Armaments, Albert Speer "from bell to bell" served 20 years and was released in 1966. After that, he lived free for another 15 years and died in 1981 at the age of 76. Rudolf Hess was less fortunate, although he lived more: he died in 1987 at the age of 93 in Spandau Prison, without having seen freedom.

As for the generals, fate was more favorable to many of its representatives. The logic of the punishments was as follows: they say, German generals were military men, they say, executed orders, and did not make political decisions. But on their conscience - the ruined lives of civilians in the occupied territories, tens of thousands of lives. .

Infantry General Otto Wöhler played a very prominent role on the Eastern Front: he met the 47-year-old chief of staff of the 11th Wehrmacht army. In April 1942, Wöhler became the chief of staff of Army Group Center, from April 1943 he commanded the 1st Army Corps, and from August 1943, the 8th Army, which fought in Ukraine. In December 1944, he was appointed commander of Army Group South. Wöhler was “lucky," he surrendered to the Americans. Nevertheless, he was sentenced to 8 years in prison for revealed facts of cooperation with the Einsatzgruppe.

In 1951, Wöhler was released and settled in his native Burgwedel in Lower Saxony, where he lived a long and calm life of a respectable German pensioner. Wöhler died in 1987 at the age of 93, having outlived many colleagues for decades. About crime and punishment ... by the way.

The fate of another German general, Hermann Balck, turned out to be practically the same. General tank troops Georg Otto Hermann Balck began military service even before the First World War, and by the time of the attack on the Soviet Union he was already a colonel, commander of a tank brigade. In May 1942, he was appointed commander of the 11th Panzer Division and in August of the same year he was promoted to major general. 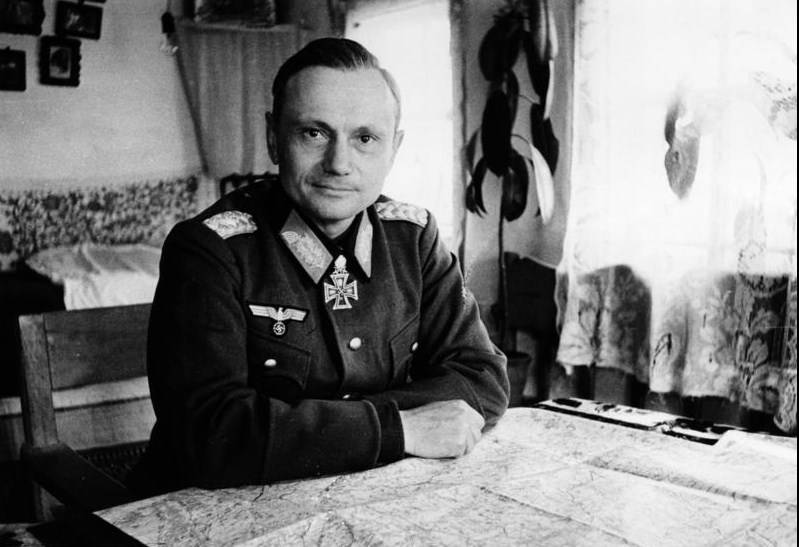 Tank Troops General Georg Otto Hermann Balck
In November 1943, Balck, who had reached that time before the general of the tank forces, became commander of the 48th Panzer Corps, in August 1944 he led the 4th Panzer Army, and then commanded Army Group G. Since December 1944, Balck commanded the Army Group Balck (6th Wehrmacht Army, 1st and 3rd Hungarian Armies) and the 6th Army operating in the vicinity of Budapest. Before the complete defeat of Germany, Balck withdrew his army to Austria and again surrendered to American troops.

The brave tankman was not touched. In 1947, he was released from captivity, but in 1948 a German court convicted him of three years - in November 1944, Balck ordered the execution of a drunken lieutenant colonel, Schottke, incapable of fulfilling his duties, without a court sentence. . However, Balck lived after the war for a long time and died only in 1982 at the age of 88.

In 1979, an 85-year-old man died in the small Bavarian town of Wolfratshausen. Quiet pensioner Wilhelm Bittrich was actually not so simple. Obergruppenfuhrer SS, he commanded the famous SS division "Das Reich" during the battles near Moscow in 1941. Then Bittrich commanded the 8th Cavalry Division of the SS Florian Gayer, the 9th Motorized Division of the SS Hohenstaufen, and the 2nd Tank Corps. On May 8, he surrendered to American troops. And why did German war criminals gravitate so much to surrender precisely to the Americans ... They understood that they were waiting for all the acts that they did on the Eastern Front, in the Soviet Union ... 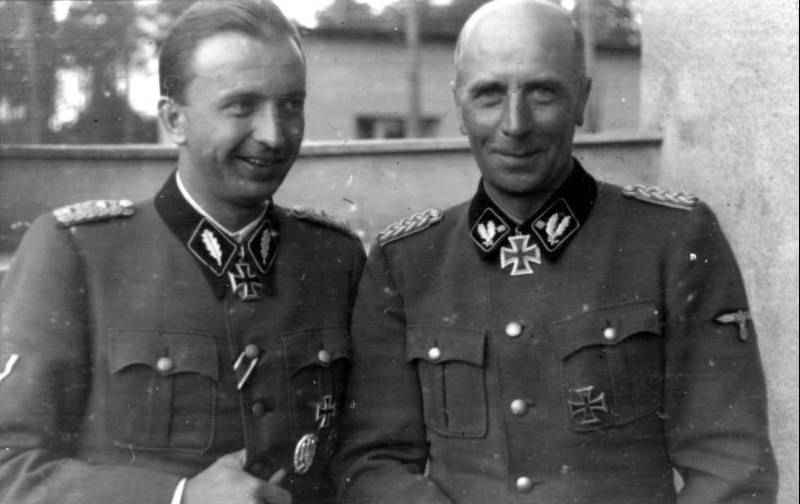 Wilhelm Bittrich and Herman Fegelein, Soviet Union, 1942
In 1953, in France, he was prosecuted for participating in the execution of 17 members of the Resistance movement. Bittrich received 5 years in prison, after his release he returned to Germany and lived a quiet life, not engaging in any political affairs.

Obergruppenfuhrer SS and General of the SS Karl Maria Demelhuber also had the good fortune to live to a very old age. He died in 1988 at the age of 91. But meanwhile, it was Karl Demelhuber in November 1940 - April 1941. commanded the SS Troops in Poland, then the 6th SS mountain division “Nord” in Finland, was commander of the SS Troops in the Netherlands.

Naturally, with such a track record the general had many war crimes, but since 1948 he has been at large. Moreover, Demelhuber was actively engaged in public activities and was chairman of the arbitration court of the Society for Mutual Assistance of former members of the SS troops (HIAG).

The police general and SS Obergruppenführer Wilhelm Koppe did not reach the eighties a bit (he died in 1975 at the age of 79). He directed the activities of the SS in the Governor General, responsible for the expulsion of Jews to ghettos and concentration camps. Koppe was called one of the key organizers of Nazi terror in Poland.

But in 1945 he managed to escape. Under the maiden name of his wife Loman, he even became the commercial director of the chocolate factory in Bonn. In 1960, he was identified, arrested, and brought to justice for the killing of more than 145 thousand people. But due to health reasons, in 1966, Koppe was released. Health, by the way, was not so bad, since he lived to almost 80. But ruined lives - well, who in the countries of a victorious democracy recalls them. There is "reconciliation", general ...

The main executioner of the Zmievsky beam survived until 1987

Kurt Christman is somewhat out of the heroes of our story. He was not a general, but an SS Obersturmbahnführer (lieutenant colonel), however, it was this Munich lawyer, doctor of jurisprudence, who led the notorious SS 10a Sonderkommando, who massacred tens of thousands of Soviet citizens in Rostov-on-Don, Yeysk, Taganrog, Krasnodar, Novoross.

After the war, Christman was arrested, but in 1946 he escaped and spent 10 years in Argentina. Returning to his homeland, Christman became one of the richest lawyers in Munich. In 1974, he was still arrested, but with the help of fake medical papers, Christman managed to delay the verdict of the court. However, in 1980 he was still sentenced to 10 years. Kristman died in 1987 at the age of 79, having survived thousands of his victims for decades.

By the way, Christman's subordinates in the Sonderkommando were identified by the Soviet state security agencies and shot by court verdict back in the 1960s.

As we see, the fate of the surviving German generals and senior officers evolved differently. As a rule, there were no complaints against army generals, or they were insignificant. But often outright murderers like Kurt Kristman or Wilhelm Koppe remained at large. They had to be shot back then, in the victorious 45th, but they safely survived to a very old age.

Ctrl Enter
Noticed oshЫbku Highlight text and press. Ctrl + Enter
We are
The secret of the mission of Rudolf Hess is not disclosedThe last den of fascism
Military Reviewin Yandex News
Military Reviewin Google News
61 comment
Information
Dear reader, to leave comments on the publication, you must to register.