Features of equipment and weapons of the National Guard, the US Army and police during the riots 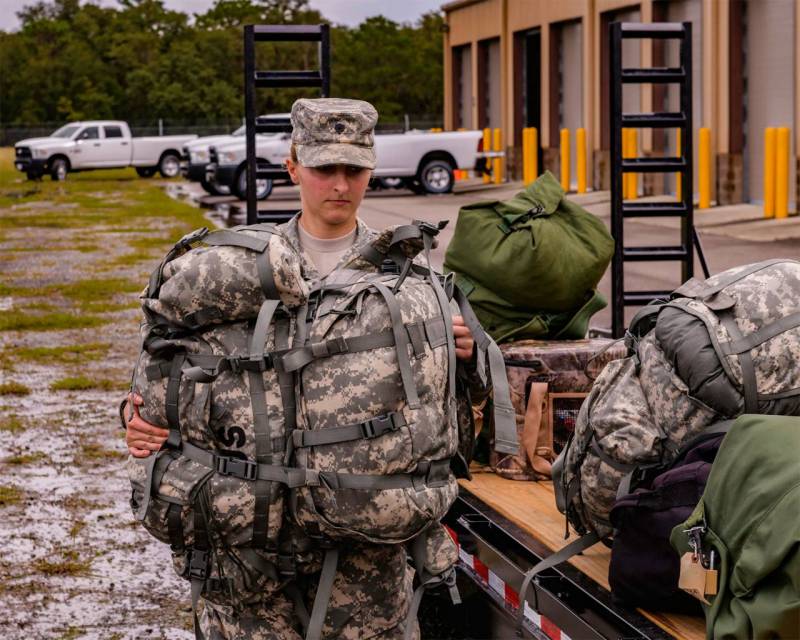 The riots in the United States forced the American leadership to mobilize tens of thousands of police and military personnel to fight protesters. Naturally, equipment and weapons are of particular importance in clashes on city streets. What features are there.


One thing is fighting against an armed enemy or special operations to capture criminals, where it is allowed to use gunshots to defeat weapon, and quite another thing - the dispersal of mass rallies. Fortunately, the times of machine-gun demonstration shootings are a thing of the past and today firearms are used during mass riots as a last resort.

On May 4, 1970, Ohio State Guard soldiers shot students protesting against the US Army invasion of Cambodia. Four people were killed, nine people were injured. For fifty years, a public outcry “whispered” the American army and police to use firearms to disperse mass demonstrations. 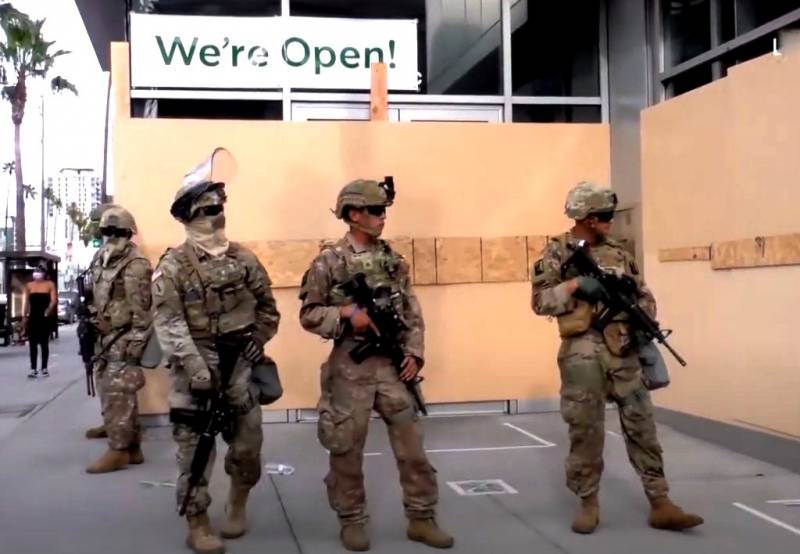 Thunder grenades, tear gas and other methods of the National Guard 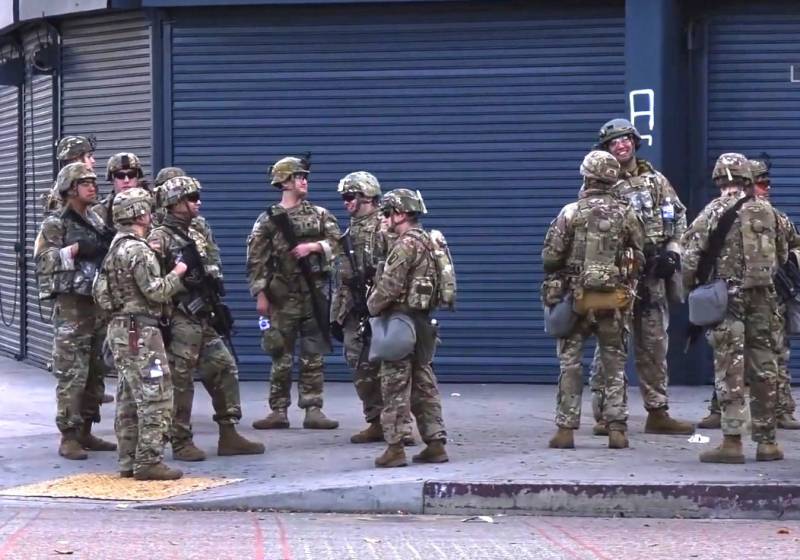 On numerous video frames from American cities, we see that law enforcement officers and military are equipped and armed in completely different ways. Someone in the usual police uniform and with batons, even without protective equipment. But these are those policemen who work in cordons in areas remote from the epicenter of riots. Fighters in special helmets, protective vests, and long batons go directly against the protesters. Soldiers of the National Guard and units of the ground forces - in field uniforms, helmets, with gas masks.

What weapons are used to disperse demonstrators besides the usual batons? Firstly, these are stun grenades. In the USA, since 1995, the M84 stun gun has been in service with the police and the National Guard. When it works, there is a loud pop and a bright flash is observed, the radius of damage is 1,5 meters. By the way, the pomegranate is quite dangerous, there are cases when people remained disabled as a result of its use, for example - they died irreversibly.

Secondly, the US police, like law enforcement agencies in many other countries, are actively using tear gas to disperse the demonstrators. Although this time, the US administration denied using it against demonstrators in the capital, there is no doubt that it was used. For example, American media reporters noted the use of tear gas against protesters in New Orleans. In Minneapolis, police used tear gas against a group of 12 journalists. There are many shots that show how the police spray such gas literally into the eyes of the demonstrators. 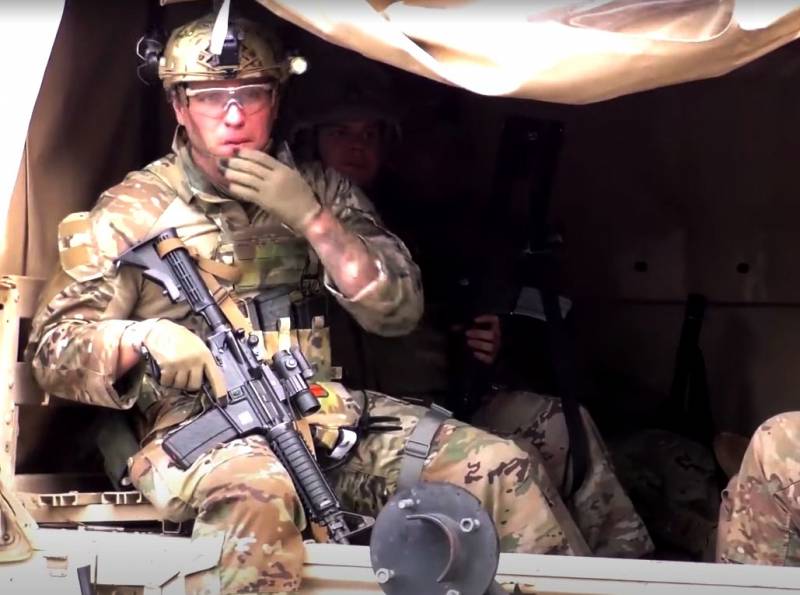 Why paintball guns are effective against demonstrators

Now the US National Guards, thrown against the swelling radicals, are actively using guns for paintball. Immediately in several American cities, their use against protesters was noted and it, judging by the reaction of the crowd, gives its results.

Firstly, any gun in the hands of a soldier or a policeman, even if shooting non-lethal ammunition, has a psychological effect on the protesters.

Secondly, the practical importance of guns for paintball is that hits on demonstrators leave traces of paint on their clothes and bodies. Then, in hot pursuit, it is much easier for the police to identify those who were most active in the crowd of protesters, so to speak, in the forefront.

By the way, paintball is part of the combat training system of the US National Guard soldiers. Through practicing paintball, they just develop skills in the conditions of urban battles and clashes with demonstrators. Therefore, the skills of shooting from paintball guns at the national guards of the USA are honed at a high level.

Body armor and other equipment: 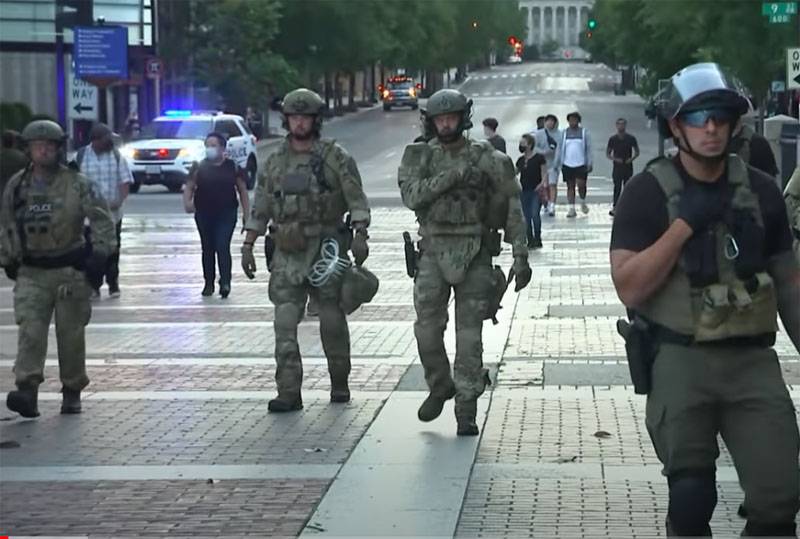 But not a single paintball weapon, as they say. A number of units of the same National Guard entered the streets of American cities with weapons in the form of assault rifles - with live ammunition. The 1st Infantry Division, introduced in Washington, is also armed with lethal weapons. True, so far there have been no cases of its use.

Ctrl Enter
Noticed oshЫbku Highlight text and press. Ctrl + Enter
We are
Reports from the militia of New Russia for 27-28 September 2014 of the yearCombat gear "Warrior" on the way
Military Reviewin Yandex News
Military Reviewin Google News
60 comments
Information
Dear reader, to leave comments on the publication, you must sign in.