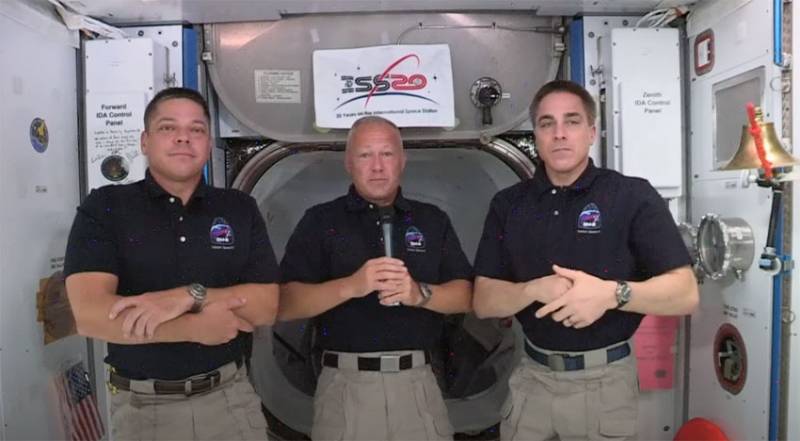 It became known about what American astronauts who arrived on the Crew Dragon spaceship are doing on the International Space Station. Recall that NASA astronauts Dag Hurley and Bob Benken made their first flight in an American spacecraft in 9 years. This ship was designed and built by SpaceX Ilona Mask.


NASA reports that Benken and Hurley are engaged in "accelerated study of work on the ISS." Another American astronaut, Chris Cassidy, acts as a kind of instructor and guide for them. He was already aboard the ISS along with the Russian cosmonauts by the time Crew Dragon arrived.

Astronauts Hurley and Benken familiarized themselves with the simulators at the station, including the Advanced Resistive Exercise Device (ARED). ARED simulates overweight exercises and works on all major muscle groups. The duo also reviewed personal protective equipment and unloaded the HTV-9 Japanese cargo ship.
According to recent reports, initially such an unloading involving Hurley and Benken was not provided.

The spacecraft HTV-9 Kounotori (White Stork) docked with the ISS on May 25. He delivered to the station about 6 tons of various cargoes, including batteries for the ISS US segment. Among the cargoes is a high-resolution binocular telescope iSIM, as well as a microscope for work at the station.

Then, American astronauts decided to use the so-called NASDAQ call as a new PR move to open the US financial markets. From orbit, they launched a new day of exchange activity, striking a special bell.

NASA recalled that astronauts Hurley and Benken had already been to the ISS, but that was a long time ago - in 2009 and 2011. They carried out flights on the spacecraft Atlantis and Endeavor.

Meanwhile, the world continues to discuss the first manned flight of the American spacecraft Crew Dragon to the ISS. If some note the undoubted success of the American space industry, others do not understand this euphoria, noting that it would be strange if the space power, which is the United States, would not be able to build its own spacecraft.

It is planned that in the near future Crew Dragon will begin undocking, followed by descent to Earth.
Ctrl Enter
Noticed oshЫbku Highlight text and press. Ctrl + Enter
We are
Snorted All the Way: US Astronauts Tells Crew Dragon to ISSAmerican replacement of the "Union" failed tests
Military Reviewin Yandex News
Military Reviewin Google News
57 comments
Information
Dear reader, to leave comments on the publication, you must sign in.