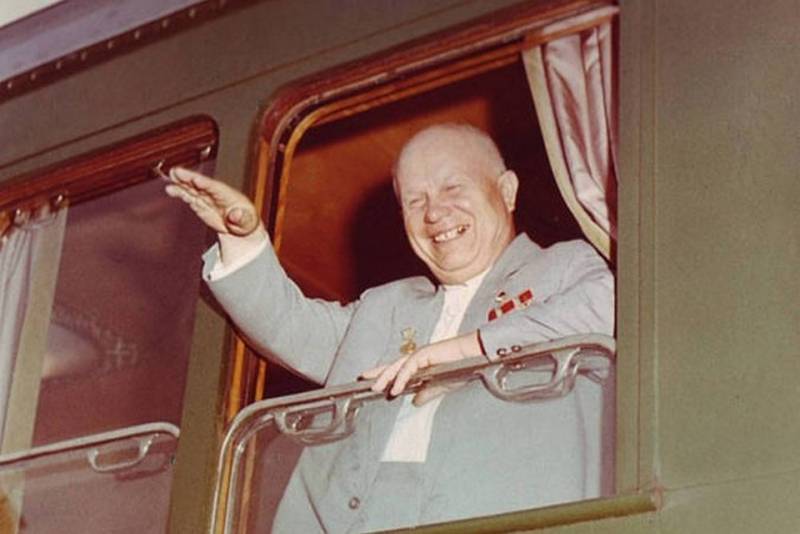 On October 14, 1964, Nikita Khrushchev, First Secretary of this body and part-time head of state, was dismissed at an extraordinary Plenum of the Central Committee of the CPSU. Someone calls this a palace coup, but rather this event can be described as a triumph of justice. What were the true incentives of the top-ranking party members who ousted the leader of the Kremlin from Olympus and the reasons that their actions were successful?


Actually, there are several fairly common versions regarding the reasons that led to the fall of this odious ruler. Let us briefly consider the main ones.

So, in accordance with the first, the whole point was that Leonid Brezhnev, who was tearing to power, and his associates, with the support of the then leadership of the State Security Committee, started a conspiracy. Taking advantage of the lack of a relaxed Khrushchev, who decided not to take his time in his beloved Pitsunda for himself, silently held the plenum mentioned above, at which, having voiced the accusations prepared in advance for the First, he was forced to resign.

This option is, to put it mildly, extremely simplified. In addition, the overthrow of Khrushchev for the two most active participants in this case, the chairman of the KGB of the USSR Vladimir Semichastny and the secretary of the Central Committee of the CPSU, Alexander Shelepin, ended, in fact, not with a take-off, but with the subsequent (if not immediately) disgrace and removal from any real power as such. The rumors that subsequently spread that Brezhnev allegedly directly proposed to Semichastny to physically eliminate Khrushchev seemed to be completely lies. To something, and even to excessive bloodthirstiness, as his subsequent very long reign showed, “dear Leonid Ilyich” was definitely not inclined.

The explanation, based on the fact that Khrushchev was allegedly preparing a global purge of leading personnel, does not seem too realistic. Well, the apparatchiks from the Central Committee and special services, frightened for their own future, decided to encroach on the First Secretary, before it was too late, to remove. It should be noted that the personnel policy of Khrushchev throughout his leadership of the USSR was, to put it mildly, confused, careless and completely unpredictable. And these are the mildest and most decent expressions with which it can be characterized.

The stability of the position in the state or party hierarchy was not guaranteed by personal devotion to Nikita Sergeyevich and his merits. The most striking example is the fate of Georgy Zhukov, with whose help Khrushchev first came to power, and then at least once managed to hold it in 1957. So what? The Marshal of Victory was an ungrateful protege first pushed to humiliating posts, and then completely dismissed. So to the various twists and turns of the First, which subsequently received the derogatory characteristic of “voluntarism,” the party-Soviet elite was accustomed to and tolerated them - to a certain extent. This is most likely not the case.

Another interpretation of events seems much more plausible, according to which those who sent Khrushchev into political nonexistence were guided by the absolutely correct and not only timely, but rather belated consideration: “The country must be saved urgently!” And not only the country ... Khrushchev put on a dubious track in the USSR literally everything that he could reach: the army, the police, agriculture, architecture, science. After the Great Patriotic War, the Soviet Union, which had canceled the card system before Britain, was threatened with real hunger. Sometimes in the shops there was even no bread, not to mention other products. If it were not for the 860 tons of gold spent on the purchase of grain, more than 20 years after the Victory in the USSR, cards would have to be introduced again, and this would hardly have saved the situation. It has already reached the point of popular riots - for the first time in Soviet stories fire on an unarmed crowd in Novocherkassk ordered Khrushchev to open.

In international politics, things were no less bad.

Two serious crises, Berlin and the Caribbean, almost ended in a new world war. A quarrel with China, the emerging split of the "socialist camp" into three groups hostile to each other. All these were the “merits” of Khrushchev, who imagined himself to be a great world-class politician. Well, not only the highest state orders of the USSR, executive cars and even airplanes distributed to them by foreign princes, but also billions in gold and currency in the form of “aid for building socialism”, generated bad debts that neither the USSR nor Russia did were able to recover.

There is evidence of a voluminous secret report that, if Khrushov refused to voluntarily resign at the next plenum of the CPSU Central Committee, would be openly announced by a member of his presidium Dmitry Polyansky. This document was filled out, created primarily by the efforts of KGB officers, so "killer" compromising evidence that, having flipped its first few pages, Khrushchev gave up. Moreover, there really was no one to lean on him: he had betrayed all that he could by that moment and pushed him away. I personally am very sorry that the case ended with this, and not with a public trial of the one who, defaming the name of Stalin, derailed all the achievements of his era and took the first steps to the subsequent death of the USSR.