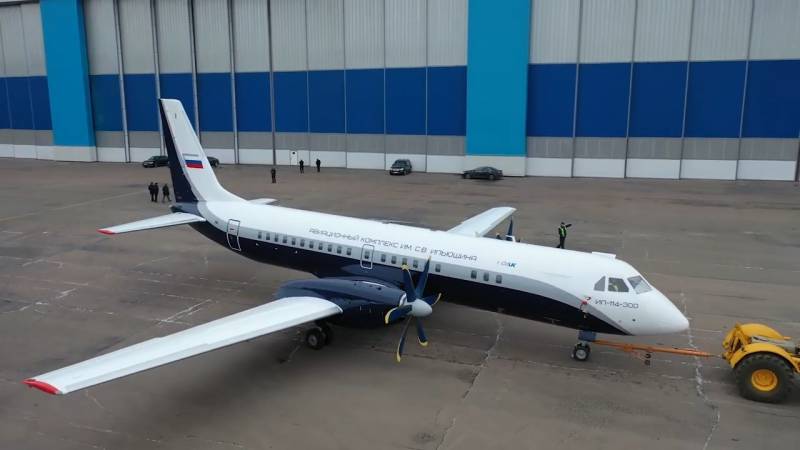 In 2014, the country's leadership ordered the launch of the production of IL-114 passenger aircraft at domestic enterprises. The next few years were spent on the development of an updated project, the preparation of production facilities and the establishment of cooperation. To date, the improved project Il-114-300 has reached the stage of construction of prototypes - and this year the start of flight tests is expected. Accordingly, there are opportunities to assess project prospects.

The basic project IL-114 was created in the eighties taking into account the needs of civil aviation of that time and the capabilities of the Soviet aviation industry. It was a regional liner with a payload of several tons. The first flight of such a machine took place on March 20, 1990. A few years later, serial production began in Tashkent. However, it was possible to build less than 20 cars, after which the work was curtailed due to the difficulties of the industry and the lack of interest from customers.

The modern IL-114-300 project provides for the preservation of the general architecture and parts of aircraft units. At the same time, the power plant and avionics are replaced by modern models. Due to this, the growth of the main technical and economic characteristics is achieved, as well as full compliance with modern requirements of various kinds is ensured.

IL-114-300 is a twin-engine low-wing with two turboprop engines TV7-117ST-01 with a power of 2650 hp. and low noise propellers. The auxiliary power unit TA-1 is provided. The aircraft receives a modern digital flight control and navigation system TsPNK-114M2. The crew includes two pilots. 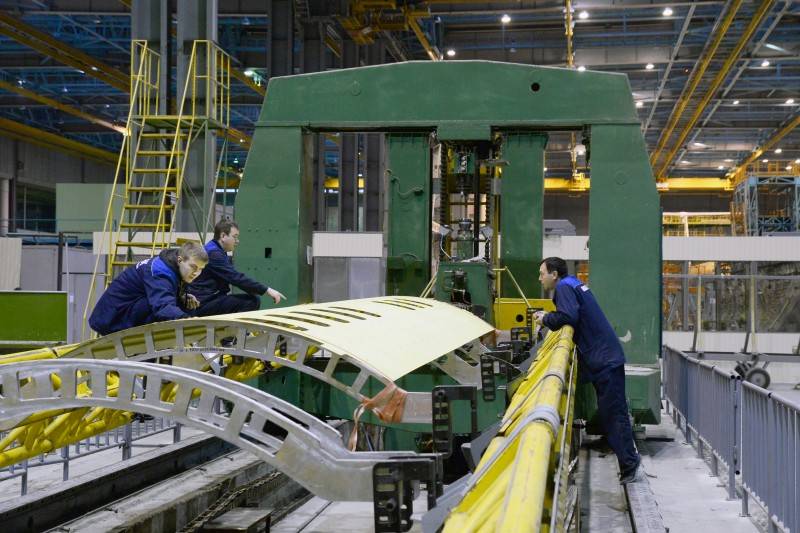 Production of fuselage sections at the Aviastar-SP enterprise
In the proposed form, the Il-114-300 will be able to take on board up to 68 passengers or 6,5 tons of other load. The maximum take-off mass is 23,5 tons. Cruising speed is 500 km / h, and the range with maximum load is 1900 km. The aircraft is able to work at airfields of various classes, including with poorly trained stripes. The use of modern economical engines with high-performance propellers allows improving flight performance and economic characteristics in comparison with the basic modification.

The development of the updated project and its individual elements with the subsequent launch of production were entrusted to the United Aircraft and the United Engine Corporation. Several enterprises with extensive experience in the construction and maintenance of civil aviation equipment were involved in production cooperation.

The development of the IL-114-300 performed Aviation complex them. Ilyushin. The production of individual units and the final assembly were distributed between the Voronezh Joint-Stock Aircraft Engineering Company (VASO), Aviastar-SP Ulyanovsk Plant, Sokol Nizhny Novgorod and MiG Lukhovitsky Plant. The project involved a host of other suppliers of individual units. An important feature of the project is the rejection of imported components, all products are manufactured only by domestic enterprises.

At the moment, such cooperation was able to establish the production of experimental aircraft. Voronezh, Ulyanovsk and Nizhny Novgorod are responsible for the manufacture of various units and systems. Finished products are sent to Lukhovitsy, where the final assembly is carried out. It is likely that this approach will continue in the future, when the project reaches serial production.

At the end of December 2019 at the airport of the Flight Research Institute. Gromov in Zhukovsky rolled out the first prototype IL-114-300. According to well-known data, it was carried out on the basis of the basic IL-114 s / n 01-08, built in 1994 in Tashkent. For a long time, this car was in Zhukovsky, and it was rebuilt according to a modern design. 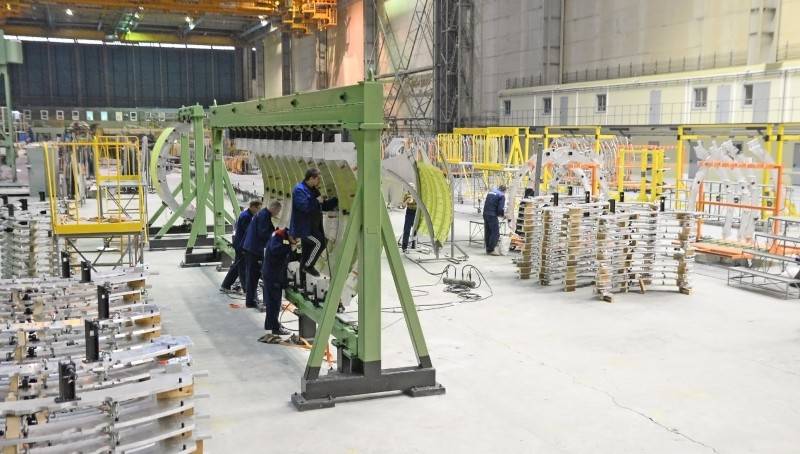 Now in Lukhovitsy, the assembly of the second prototype aircraft z / n 01-10 is being carried out, this machine is being built from scratch. It will be completed this year, after which it will be passed for testing. In February, it became known about the start of production of another aircraft. This will be another prototype, but they are building it completely using serial technologies. With its help, all the necessary production processes will be worked out, which in the future will provide the beginning of a full-fledged series.

According to recent reports, the first prototype IL-114-300, rebuilt from the "simple" IL-114, should now go to ground tests. These events will take several months, and in November the first test flights will begin. By that time, the first prototype of the new construction will come out of the assembly shop.

Flight tests will continue during 2020-22. By the beginning of 2023 AK them. Ilyushin plans to complete the certification of a new model, and then begin mass production with the supply of finished machines to customers. It should be noted that the IL-114-300 project encountered significant difficulties, because of which the timing of the implementation of its various stages was repeatedly shifted. It cannot be ruled out that at the test stage aircraft manufacturers will deviate from the schedule. However, the delay should not be large, and the operation of the aircraft will begin no later than the middle of the new decade.

The first agreement on the supply of future IL-114-300 appeared in 2017. The state transport leasing company placed a preliminary order for fifty aircraft. In the foreseeable future, they planned to bring it to the state of a full-fledged supply contract. 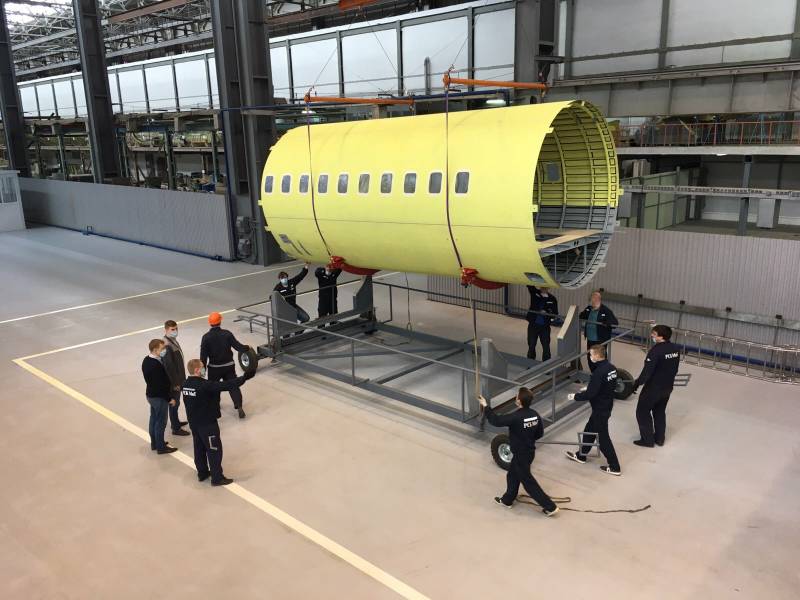 Assembly of the fuselage section at the Sokol plant
In June 2019, the management of MiG RSK announced the presence of several customers. At the end of August, three preliminary agreements appeared for the supply of 16 aircraft to various airlines. The largest order, for 8 cars, was placed by the Yakut Polar Airlines. The smallest order is from KrasAvia from the Krasnoyarsk Territory, which plans to receive three aircraft.

According to known data, deliveries of 16 aircraft to three customers will take several years. The transfer of the first cars is scheduled for 2022, the last - on the 2026th. At the same time, the project developers claim that it is possible to enter the production of up to 10-12 aircraft per year.

Such output volumes will make sense when there are large orders. According to various estimates, Russian airlines require at least several dozen IL-114-300s. Most of the orders will probably begin to arrive after the completion of work on experimental aircraft.

The successful completion of the IL-114-300 project with the launch of the series and the delivery of finished equipment to customers will help to solve several important problems in the context of the development of civil aviation. At the same time, such a plane is becoming one of several similar measures taken in recent years.

The main positive result of the new project is the emergence of another domestic regional aircraft that meets all modern requirements. At the same time, the Il-114-300 is a completely Russian development and is being built only with the use of our units. Due to this, the production and operation of equipment will not depend on imports and possible problems with it. 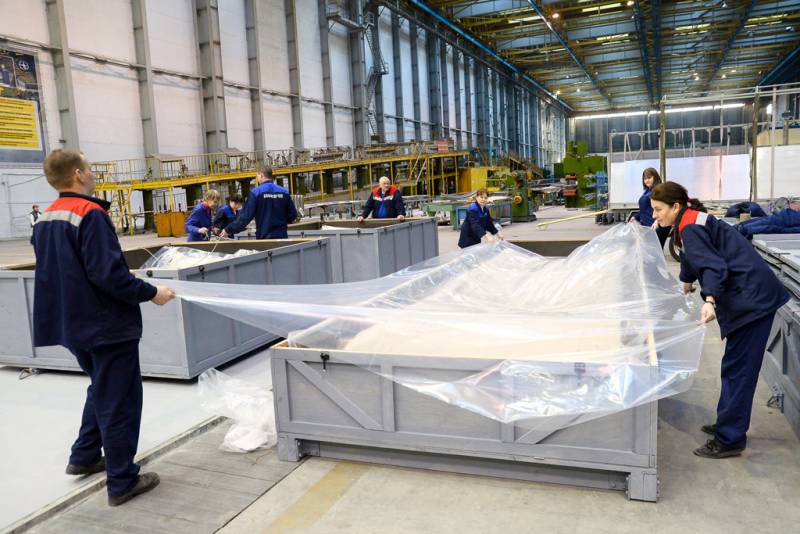 Preparation of parts for transportation - joint production requires established logistics
Given the difficult situation in the world and the problems of leading manufacturers of aircraft, it can be assumed that the Il-114-300 has commercial prospects not only in the domestic market. However, one should not hope for the rapid emergence of particularly large export contracts.

Development and preparation of production of the modern IL-114-300 were not simple and cheap. The work was launched at the end of 2014, but the prototype was not yet in the air. In the early stages of the project, the state allocated almost 9,6 billion rubles to carry out the necessary work. Last year, they added 2,22 billion to organize mass production.

The feasibility of these costs will be shown in the very near future. The completion of ground tests of the first prototype “01-08” is expected, and by the end of the year its first flight will take place. Then, the first prototype aircraft built from scratch will join the tests. It will be followed by a machine using serial technologies.

In general, it is now clear that the industry has coped with the task. The existing aircraft underwent a deep modernization and received new components, thanks to which it now meets modern requirements and can find a place in the system of passenger and cargo transportation.

However, all this must be confirmed in practice, as part of the tests that will start in the near future. 2020 will be a key year in stories project IL-114-300 and determine its real prospects. So far, everything is optimistic.