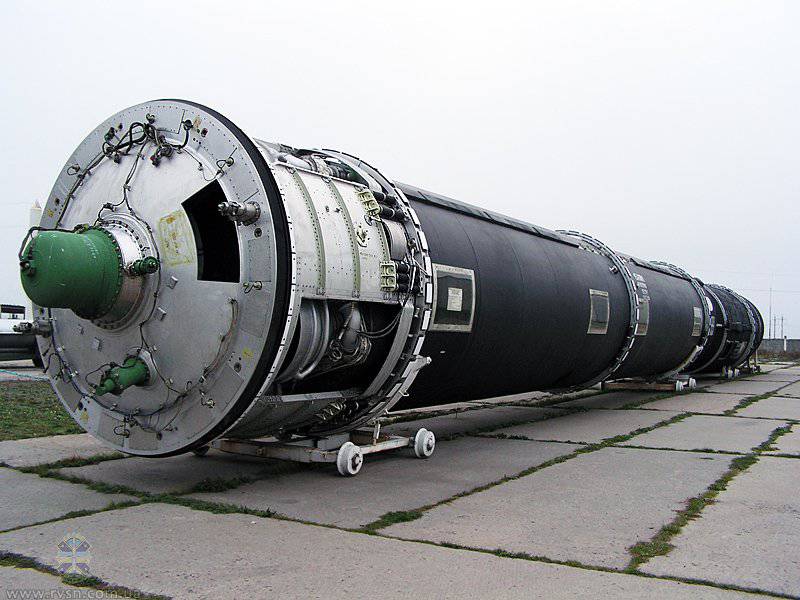 In the Dombarovsk missile compound (Orenburg region) 30 on July 1988, the first missile regiment with the missile system (RK) RS-20V "Voevoda" (according to the Western SS-18 classification "Satan") took up combat duty.


Up to the present, the RS-20В remains the world's most powerful intercontinental ballistic missile (ICBM), the press service and information department of the Russian Defense Ministry said.

In June, the 1979 of the year in Yuzhnoye Design Bureau, under the direction of General Designer V.Utkin, developed a technical proposal for the Voevoda missile system with a heavy fourth-generation ICBM. In June 1982 of the year, a preliminary design of the Republic of Kazakhstan with the RS-20В (Р-36М2) rocket was executed. The flight tests of the rocket were conducted from March 1986 of the year to March of the year 1988. The missile system was put into service on August 11 1988.

The Voyevoda missile system with the P-36М2 rocket is designed to defeat all types of strategic targets protected by modern anti-missile defense systems (PRO) in any conditions of combat use.

Before 1990, the complexes with the RS-20В “Voevoda” missile were put on combat duty also in the divisions deployed under the cities of Uzhur of the Krasnoyarsk Territory and Derzhavinsk in Kazakhstan. As of year 1992, 88 launchers with PC-20В “Voevoda” missiles were deployed.

The Dombarovsk missile compound is currently the only one where missiles RS-20B and RS-20В "Voevoda" are launched directly from the positional area of ​​the division. Thus, within the framework of the conversion program Dnipro, which provides for the elimination of ICBMs being launched from combat duty by launching with passing launch of spacecraft to near-earth orbit, in 2011 the Ukrainian Sich-2 spacecraft and the BPA-2 advanced avionics unit were launched as well as two Nigerian, two American, Turkish and Italian spacecraft.

Since the Dnepr program has been operating since April 1999, 16 missile launches have been conducted, including four from the position area of ​​the Dombarovsky missile compound. Intercontinental ballistic missile launches in this compound resumed after a long break (from 1991 of the year) in December of 2004 of the year, the press service and information department of the Russian Defense Ministry said.

Ctrl Enter
Noticed oshЫbku Highlight text and press. Ctrl + Enter
We are
The second Yarsov missile regiment will take up combat duty until the end of 2011
32 comments
Information
Dear reader, to leave comments on the publication, you must to register.