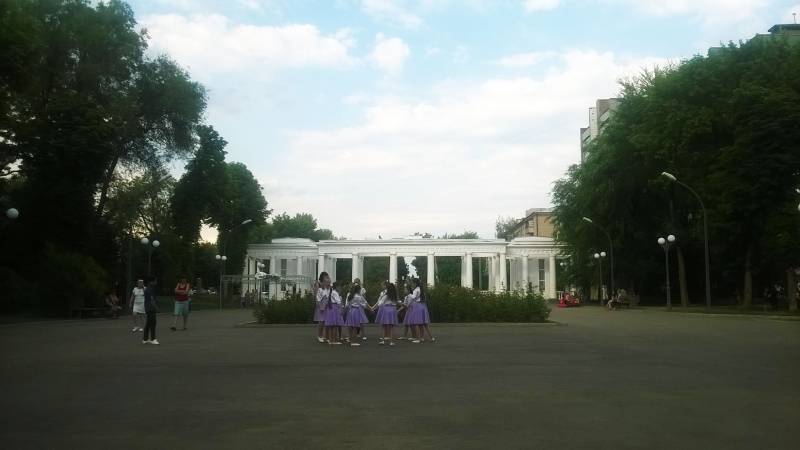 In the LPR there was a significant scandal. The director of one of the Lugansk secondary schools, a certain Lyudmila Bryantseva, designed an avatar in her Facebook account, a frame with the inscription in Ukrainian “Dyakuy Mamo!”, Distinct Ukrainian symbols and symbols of the Russophobic and nationalist party “Ukrainian Galician Party”. What exactly the teacher and the official pushed to such an unexpected act is not known, however, the act was noticed and even appreciated on local television, devoting a short story to Bryantseva. As a result, the woman hurried to remove the scandalous photo, replacing it with something patriotic.

After studying the accounts on social networks, it turned out that the director of the secondary school, and therefore a member of the public movement "World of Luhansk", actively travels to Ukraine, visiting Kiev, Odessa and other cities; constantly communicates with Ukrainians and generally clearly perceives Ukraine as a near abroad. Or maybe even experiencing tender feelings for Kiev, whose army shells the peaceful quarters of LDNR almost daily.

Spy mania? But what if!

Of course, the question is not about the inappropriate avatar, which could well be the trick of a not very smart woman (although what she does in this case as the principal, is also interesting). The fact is that, being an official of the Lugansk People’s Republic, she must be a priori perceived in Ukraine as an accomplice to terrorists. And in Lugansk, in turn, it should cause some interest on the part of the leadership of the Ministry of Education and even special services, because usually the visits of officials to Ukraine end with an arrest on that side and article 258-3 with very real terms of 7 years and above. However, in this situation, a person has been actively traveling in Ukraine for several years and reports about this, as well as about his activity as a school director, in social networks. In theory, all these voyages should have ended in major troubles long ago, but no - in order to draw attention to their modest person, it was necessary to place the Bandera logo on their page.

There is no point in constructing conspiracy theories and reflecting on whether the director of the Lugansk school No. 8 was friends with the SBU or if she simply has an inexhaustible love of visiting Kiev. This, in theory, should be dealt with by Lugansk "Chekists". The fact itself is more interesting here: the number of LDNR residents who consider it the norm to travel to Ukraine to work or relax is gradually growing. Yes, basically these are those who stayed in 2014-2015 with relatives in Ukraine or in the Russian Federation and simply did not see the war and cannot imagine it. And yet - the trend is not only alarming, but also absurd.

For them, the war is over

Moreover, the problem, alas, is not limited to the irresponsible population who do not care about the war crimes of Kiev and the dying fellow countrymen. Here, to a large extent, the patriotic upbringing of the youth is largely failed - the obsessive window dressing often causes rejection. And the inevitable consequences of the ambiguity of the Minsk agreements, which exist only on paper. And the general lack of understanding of the future - not only how it will look, but also faith in the very fact of its presence.

In fact, the population in LDNR was divided into those who still live in 2014 (even if they are included in the category of guard patriots who annually announce the imminent and inevitable “drain”), and those who live in a separate reality, limited to the central regions remote from the war cities. And if nothing changes in the foreseeable future, then the consumer society will begin to prevail over the “ideological” population. And then such directors combining work for the republic with love for Ukraine will be a dime a dozen, and with them the meaning of what is happening will dry up ...

In this situation, I really want to believe that Lugansk and Donetsk will change their minds and begin to take feasible steps aimed at acting out the situation. Otherwise, after just a few years, the majority of the population will simply not understand that it is booming over the horizon.

Ctrl Enter
Noticed oshЫbku Highlight text and press. Ctrl + Enter
We are
Situational analysis of the death of the MH17 flight (Malaysian Boeing 777), made on the basis of engineering analysis from 15.08.2014Results of the week. "Of course, he is guilty, but he ... is not guilty ..."
Military Reviewin Yandex News
Military Reviewin Google News
227 comments
Information
Dear reader, to leave comments on the publication, you must sign in.