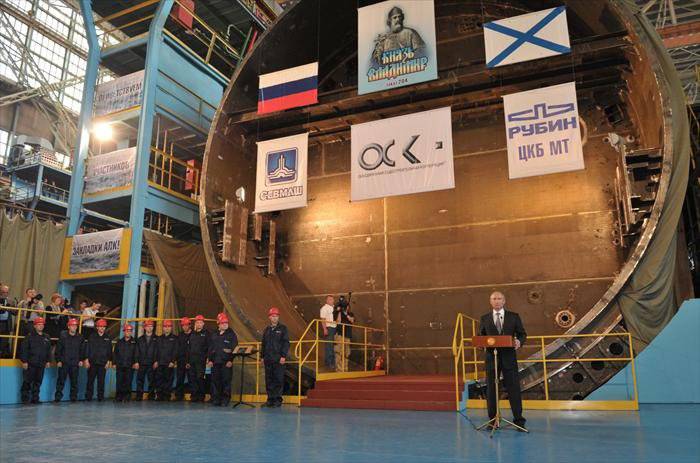 By 2020, we should have already eight such boats of the Borey project - the president set the task for Sevmash.

In general, against the background of the traditional cry about the collapse of the army and navy, the news about what is happening with the Russian Navy looks rather strange. If you analyze the flow News this year alone, there is a clear feeling that the rumors about the collapse of our Armed Forces are somewhat exaggerated. Of course, it cannot be compared with Soviet times, when the missile carriers baked like hot cakes, but there is no arms race.

On the eve of the naval sailors holiday, the commander-in-chief of the Russian Navy, Viktor Chirkov, announced that for the first time in his post-Soviet history, our fleet began a large-scale rearmament: in 2012, naval sailors would receive 10 – 15 ships, including nuclear submarines and frigates. Over the past four years, 15 ships have been accepted into the Navy. The commander also confirmed that Russia could start building new aircraft carriers after 2020, and announced the possible appearance of new locations for our ships in Cuba, Seychelles and Vietnam.

The fact that Russia is vitally important to regain its naval power, recently on the pages of our newspaper, said Academician, Hero of Russia Valentin Pashin, who devoted his whole life to the construction of warships. Pashin cited very alarming figures that the ratio of our defense potential to the US at sea is 1: 10. At the same time, in spite of any declared reboots, our overseas partners do not hide the fact that Russia is still among their enemies. And the general geopolitical situation in the world gives few reasons for carefree relaxation. Apparently, the Russian leadership soberly assesses the incoming information, and therefore has recently paid particular attention to the modernization of the nuclear submarine fleet.
The new submarine of the 955A Borey-A submarine belongs to the fourth generation of atomic strategic rocket carriers.

During the construction of the "Boreyev", new advances are being made in the creation of ship radio electronic equipment and in the reduction of noise. Their main weapon is the new Bulava missile system.

Submarines of this class are intended for launching missile strikes against strategically important military-industrial objects of the enemy.

They are equipped with a pop-up rescue camera, which is designed for the whole crew. The length of the submarine class "Borey" - 170 meters, width - 13,5 meters, depth - 450 meters, crew - 107 people. For self-defense purposes, the boats of the 955 project are equipped with eight torpedo tubes.

By the way, lately, positive processes related to rearmament have been noted in many military areas. More recently, contracts have been concluded for the construction of 48 multi-purpose fighters Su-35, 92 front-line bomber Su-34, 24 deck fighter MiG-29K. Nevertheless, today the situation in the navy definitely looks better than in other branches of the military.

A word to the expert: Igor Korotchenko, chief editor of the magazine "National Defense"

- In the matter of re-equipment, we have made good progress in many areas, but, of course, special attention is paid to the fleet today, since it is precisely this that allows us to project our strength far from our shores.

The country has launched a full-scale program for the construction of new-generation submarines. This applies to both strategic submarines of the Borey class (eight units will be built) and multipurpose Severodvinsk class submarines.

Laid new frigates and corvettes, made by technology "Stealth". Work began on the construction of warships of the ocean zone. The laying of the fourth submarine missile carrier of the 955 project is a sign that Russia has enough potential and power, and all the rumors about the collapse of our armed forces simply do not correspond to reality. Such rumors are part of the information war against our country when they are trying to impress pessimism and humility.

Of course, the United States today is military power No. XXUMX, but we don’t need to enter into a frontal arms race now. There is a negative experience of the USSR, which did not withstand the unbearable burden of military spending, so it is very important to rationally use those 1 trillions of rubles allocated for the state rearmament program. The fleet is a very expensive pleasure; hundreds of enterprises are involved in the production of warships and submarines. In the world, you can count on your fingers countries that can themselves provide the full cycle of construction of nuclear submarines - from development to launch. Thank God, we did not squander the Soviet potential, saved it and even strengthened it.

The fleet rearmament program is being successfully implemented, as long as there is no sequestered planned defense spending.

Of course, in the USSR money was spent much more, but today expenses are more efficient. The Achilles' heel of the Soviet Navy was the absence of points of basing, and the ships developed their resources while on the roadstead. Poor coastal support and living conditions for personnel were poorly organized. Today this situation is changing for the better. For example, in Vilyuchinsk, where the base of the submarine of the Pacific Fleet is located, there are simply excellent conditions for the service and recreation of sailors. There were built good houses and apartments, excellent kindergartens, a naval hospital - all this appeared already in the new century. The first Borei class missile carriers will arrive there, and for them there already is a coastal infrastructure that will extend the life cycle of submarines.

By the way, the return of our fleet to Cam Ranh, which is now talked about, is quite realistic, especially after negotiations with the Vietnamese president and the allocation of a loan of 10 by Russia for billions of dollars for this country. As part of these negotiations, the idea arose of using Kamrani as a point of logistics for the ships of the Pacific Fleet. Today we do not need a full-fledged military base there, it’s enough to have a point in Kamrani where the crews can rest, refuel the ships, carry out routine repairs.