Clothing of the northern "barbarians" 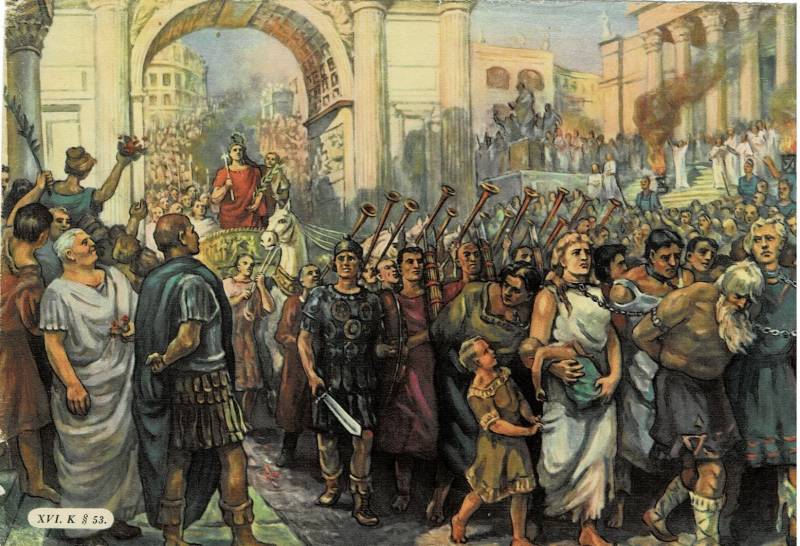 The triumph of the Roman emperor. Captured Germans spend on the streets of Rome. Drawing from the Soviet textbook on stories The ancient world for fifth grade. There are some inaccuracies, but on the whole, the idea of ​​the fashion of imperial Rome and its opponents is barbaric.

A woman should not have men's clothing.
Deuteronomy 22:5

Culture of clothes. In the Bronze Age, the ancient Germans developed a highly developed clothing culture, as evidenced by numerous historical finds. So the term "barbarian", which has a completely obvious meaning today, did not fit the Germans of that time completely, but only meant what the Romans understood by these concepts. And the Romans "barbarian" - this is just a "stranger." Moreover, the influence on the clothes of the Roman Empire from the “barbarians” was much stronger than from the Romans to the barbarians, which does not testify to the backwardness and imperfection of the costume of the same ancient Germans. 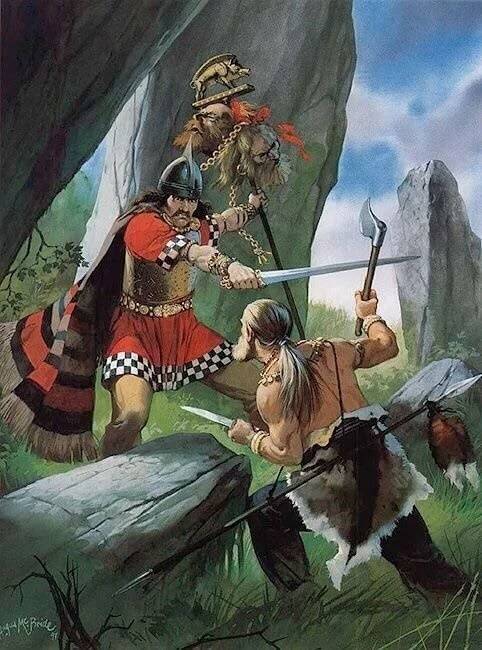 Celt (left) battles the German. Fig. Angus McBride
The main type of clothing of the Greeks, Romans, and other representatives of the Mediterranean culture was a simple draped piece of linen, while the ancient Germans and Gauls in the west and Parthians in the east owned cutting and sewing techniques, as evidenced by bone and bronze needles found by archaeologists. 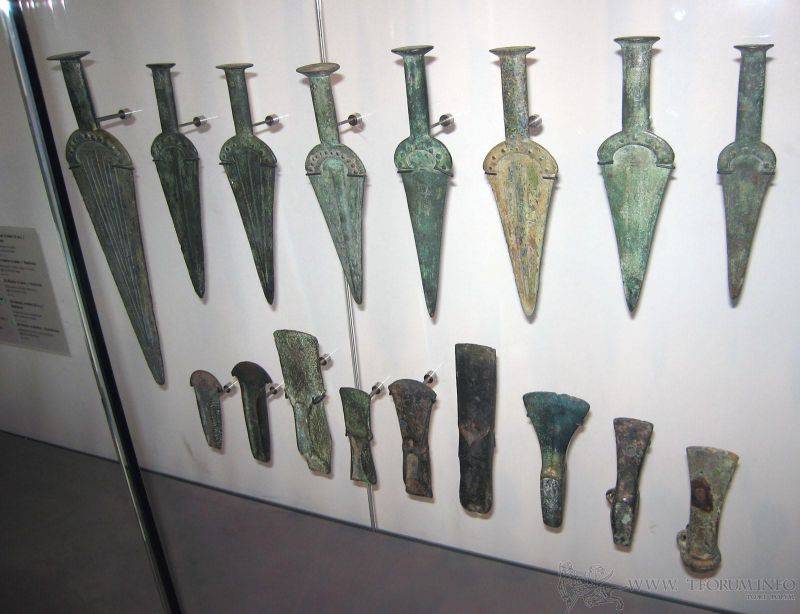 Bronze Daggers of the Bronze Age in Europe Army Museum, Paris
Naturally, a rather severe climate influenced the lifestyle of the Germans. Sleeves that appeared in their suit in the III century. BC, as well as pants that appeared even earlier, already in the VI century. BC, is the best confirmation of this. In the conditions of snowy and frosty winters, you can’t find yourself without pants and bare hands. By the way, it was they, the tribes of the North, who made the main revolution in clothing: since a person mounted a horse and put on his pants before it, clothing began to be divided into male and female! 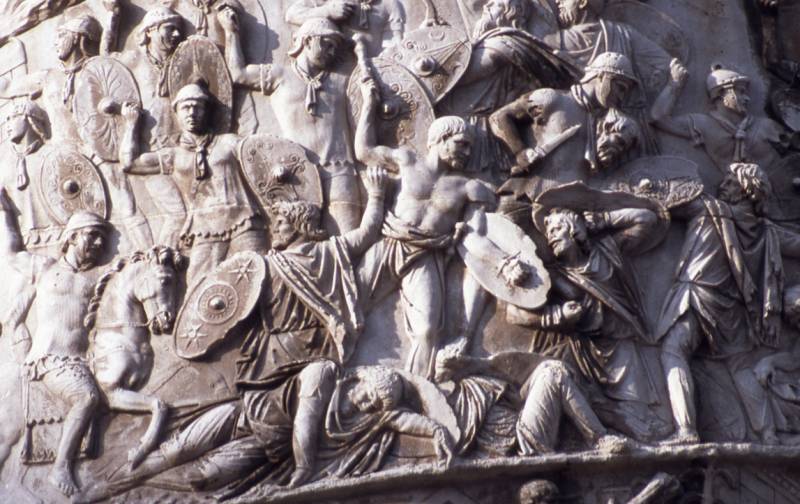 Clothes from the column of Trajan. 113 year N. e. In the center is clearly visible German warrior, an ally of Rome: with a naked torso, but in trousers and with a club in his hand. Below and to the left is a duck with a painted oval shield, dressed in a tunic with narrow and long sleeves up to the wrists, in trousers and a raincoat. All the other ducks on this bas-relief are dressed in much the same way.
The Germans called the pants “Brugs”, and the Celts - “marriage”, “marriage”, which is consonant with the Russian word “pants”. The Romans despised this type of clothing for a long time. It is known that even special centurions walked around Rome, checking to see if there were any hated barbarian pants under the toga of citizens, but ... over time they had to admit that this clothing was funny, but convenient, especially for warriors and especially for riders. 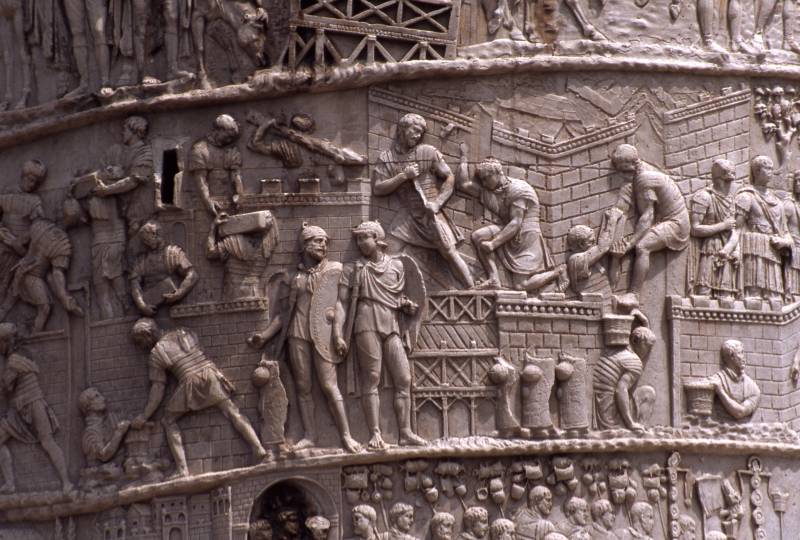 Clothes from the column of Trajan. And here the Roman warriors are already depicted wearing breeches like pants ...
It was the Germans who began to subdivide clothing according to the seasons into winter and summer and brought in chests for its out-of-season storage. Well, in general, it should be said that the clothing of the Germans was not inferior to the clothes of the ancient Greeks and Romans in quality and decoration, and in terms of expediency, of course, it surpassed it.

“I myself join the opinion of those who believe that the tribes inhabiting Germany, who have never been mixed through marriages with any foreigners, are primordially special, preserving their original purity and only resembling themselves. Hence, despite such a number of people, all of them have the same appearance: hard blue eyes, blond hair, tall bodies, capable of only short-term effort; at the same time, they lack patience to work hard and hard, and they cannot stand thirst and heat at all, while the weather and soil taught them to easily endure cold and hunger. ”
(Cornelius Tacitus. On the origin of the Germans and the location of Germany, 98 AD)

Based on the findings of archaeologists, we can imagine what the clothes of men and women - Germans of the Bronze Age era looked like. Women wore summer short-sleeved, one-piece linen blouses. The long skirt was supported by a wide leather belt with long tassels, decorated with a bronze disk instead of a buckle. A dagger in a leather scabbard could hang from a belt. Skillful bronze jewelery — a diadem, bracelet, and chest jewelry — were not uncommon. Moreover, women participated in battles, being in the ranks with men. Their task was primarily to scare the enemy with loud screams. The warrior man was armed with a long sword and a dagger with bronze handles. The animal skin cloak was fastened with a bronze fastener medallion. Bracelets in the shape of a solar disk on the wrists and forearms, as well as a belt decorated with plaques showed its high status. The warrior could wear a skirt to the knees with a fringe of coarse wool. On her feet were leather sandals, both women and men had them. 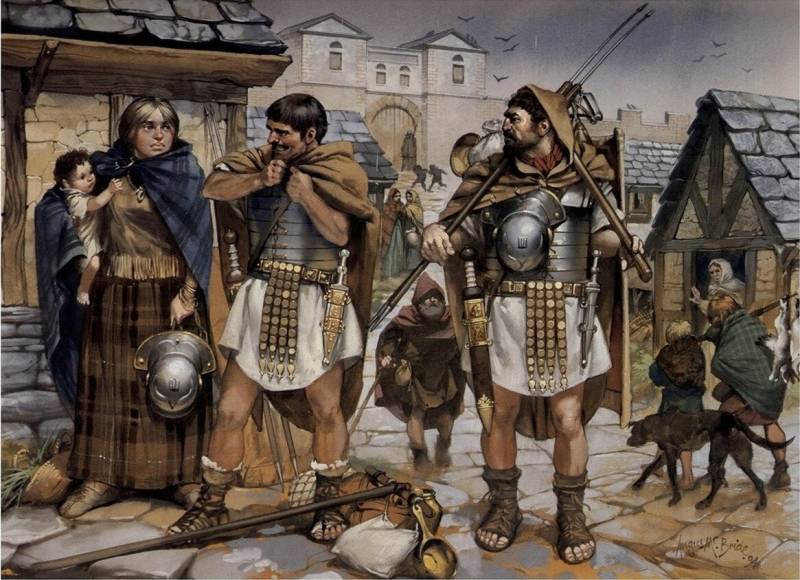 German woman surrounded by Roman legionnaires. Fig. Angus McBride
However, this type of women's dress is also known, which could belong to girls participating in dances, or priestesses. Their short woolen skirt was made of woolen threads enclosed in bronze tubes, as a result of which such a skirt made a sound with every movement of its owner. The dress included heavy jewelry with a spiral, star or wavy pattern. This strange type of costume has existed for many centuries, and its details and jewelry are exhibited in many museums in Europe. Gold jewelry from the British Museum
The Germans' underwear was a linen tunic-skirt made of a quadrangular piece of knee-length fabric. The tunic was held on shoulders on leather straps with bronze clasps. The lower end of the tunic was belted on the hips with a woolen belt with tassels. On top of the puffins, they could wear a woolen cloak or a piece of skin with the fur inside, which was fastened with a pin on the chest. In descriptions of ancient German clothing, sewn jackets made of wool or animal skins with sleeves are often found. 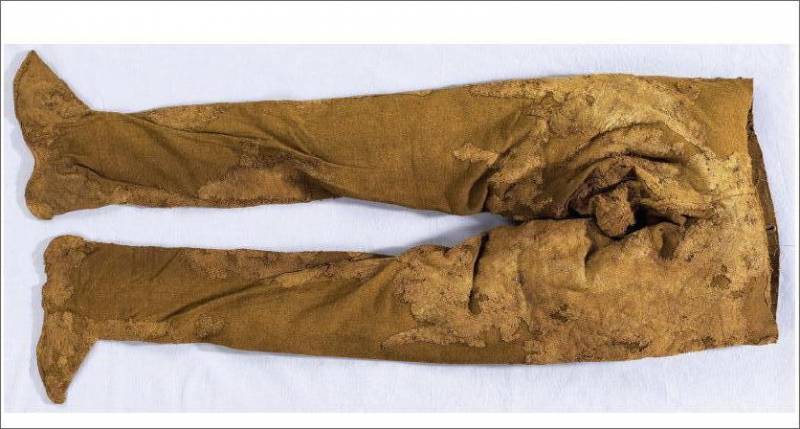 Pants from Torsberg. Schleswig Museum, Germany
Pants made of wool or linen with a wide belt were an indispensable attribute of their clothes, as they protected from the cold. In addition, they also served as underwear, and were extremely comfortable for riding, as mentioned in the XNUMXth century. Roman writer Sidonin. Much has been written about the weapons and protective equipment of the Germans by Tacitus. 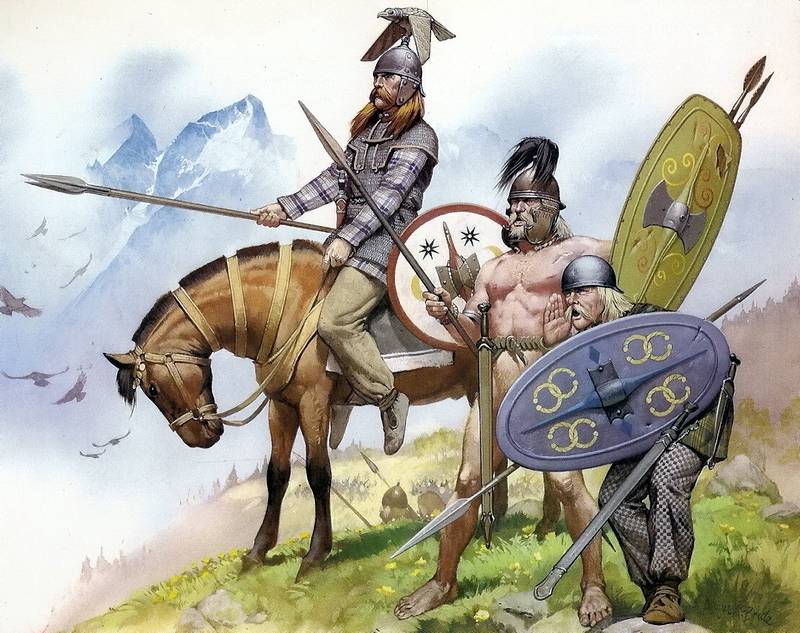 Gallic warriors of the III – II centuries BC Fig. Angus McBride
“They also have little iron, as can be inferred from the nature of their offensive weapons. They rarely use swords or long spears, but act against darts, or, as they call it, a fromey, with narrow and short iron tips, weapons so sharp and comfortable that, depending on circumstances, they fight hand-to-hand, and from afar. Even the riders are content with a framey and a shield, while the infantrymen also launch throwing spears, each of several pieces, and they, naked or in a short cloak, throw them at a great distance. They imperceptibly have the slightest desire to flaunt decorations, and they paint only shields with bright colors. We are looking for only a few shells, only one or the other for metal or leather. ”
(Cornelius Tacitus. "On the Origin of the Germans and the Location of Germany", 98 AD) 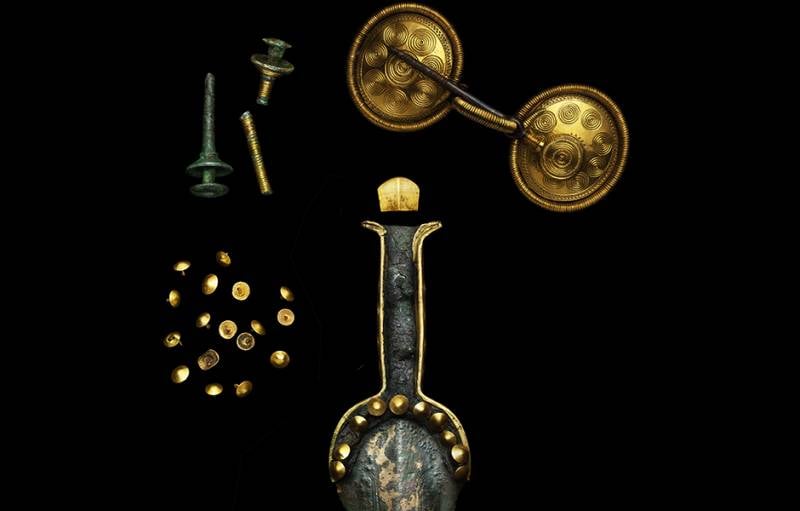 Findings from a burial in the Khoga barrow, Uppsala, Sweden. Around 1000 BC e. State Historical Museum, Stockholm
“Everyone’s outerwear is a short cloak, fastened with a buckle, if not, then with a spike. Nothing else covered, they spend whole days at the fire kindled in the hearth. The richest are distinguished by the fact that, in addition to a cloak, they also have other clothes, but not waving, like the Sarmatians or Parthians, but narrow and tight-fitting. They wear skins of wild animals ... Women’s clothes are not different from men’s clothes, except that women often wear linen cloaks, which they color with purple paint, and sleeves do not come down from their shoulders, so that their arms are open from top to bottom, as open and part of the chest near them. "
(Cornelius Tacitus. "On the Origin of the Germans and the Location of Germany", 98 AD) 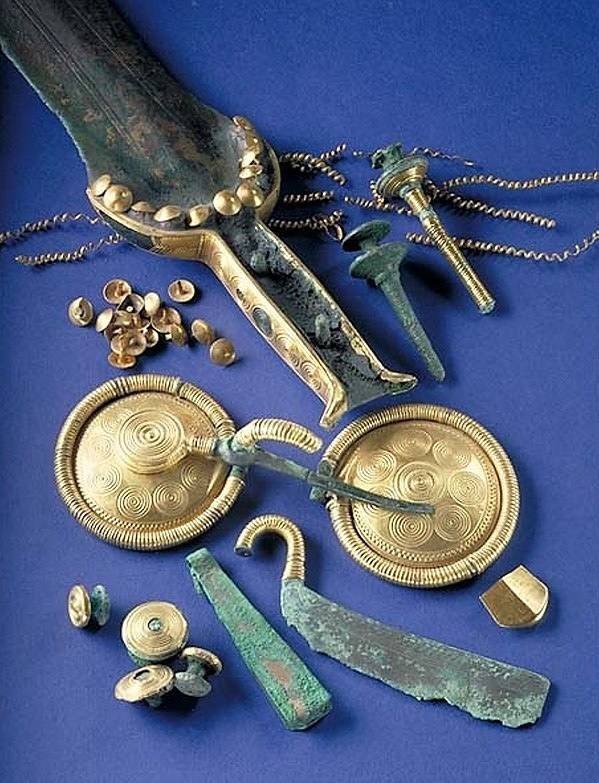 Hog Mound. Below are tweezers and a dangerous bronze razor with a handle entwined with gold wire. State Historical Museum, Stockholm
Shoes, both male and female, were simple: the sole in the form of a piece of durable leather with a perforated edge. Laces were inserted into its holes, with which the edges were pulled up and wrapped around the foot. From the ankle to the knees, the legs were covered with windings of linen or wool. 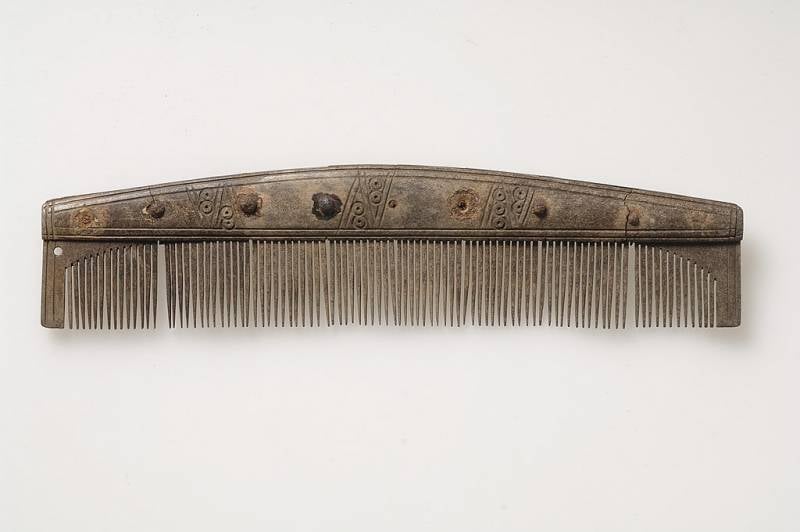 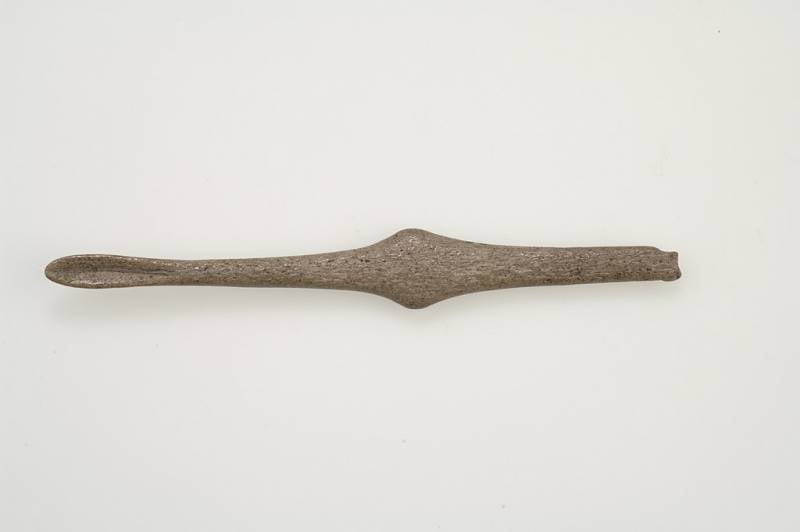 It was customary not only to comb your hair, but also to clean your ears! Ear spoon. Uppland, Sweden. State Historical Museum, Stockholm
Headwear also did not differ in complexity and sophistication: a hood or a cap in the shape of a hemisphere from sheared fur. But the hair of the Germans made a very strong impression on the Romans. The long blonde hair of German women aroused their admiration, as did the hair of women from Denmark and Britain. Male Germanic beards shaved and generally had a habit of caring for their vegetation, as evidenced not only by razors found in male burials, but also by tweezers for plucking hair. 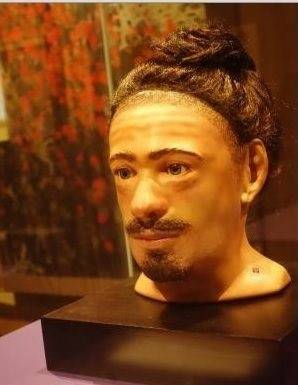 Reconstruction of the appearance of “a man from Klonikavan”. OK. IV - III centuries BC. National Museum of Ireland, Dublin 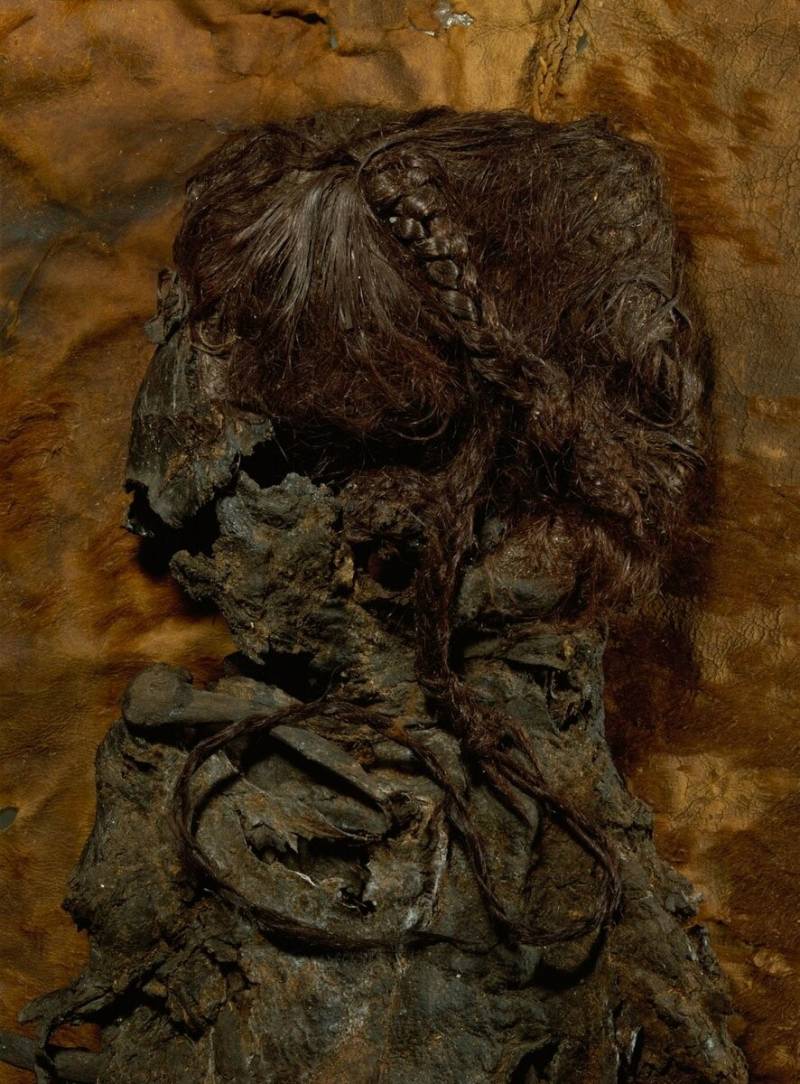 "Woman from Elling" and her hairstyle. Silkeborg Museum, Denmark
The findings of the so-called bog people, that is, bodies that have fallen into peat bogs and, due to the specific features of the swamp environment of the mummified ones, also help scientists to judge the “mods” and hairstyles of the Bronze Age. There are such finds in England, Denmark and in Germany. For example, on the head of a “man from Tollund” there was even a pointed leather cap sewn with fur inside, just like fairy-tale gnomes; a woolen dress was found next to the burial of the "woman from Huldremose", etc. And the “man from Klonikavan” allowed me to get some idea of ​​hairstyles. It turns out that he had hair styling with a mixture of resin with vegetable oil. The “man from Osterby” had a knot of hair above his right temple, and the Roman historian Tacitus pointed out that such hairstyles belonged to people from the Suevi tribe. 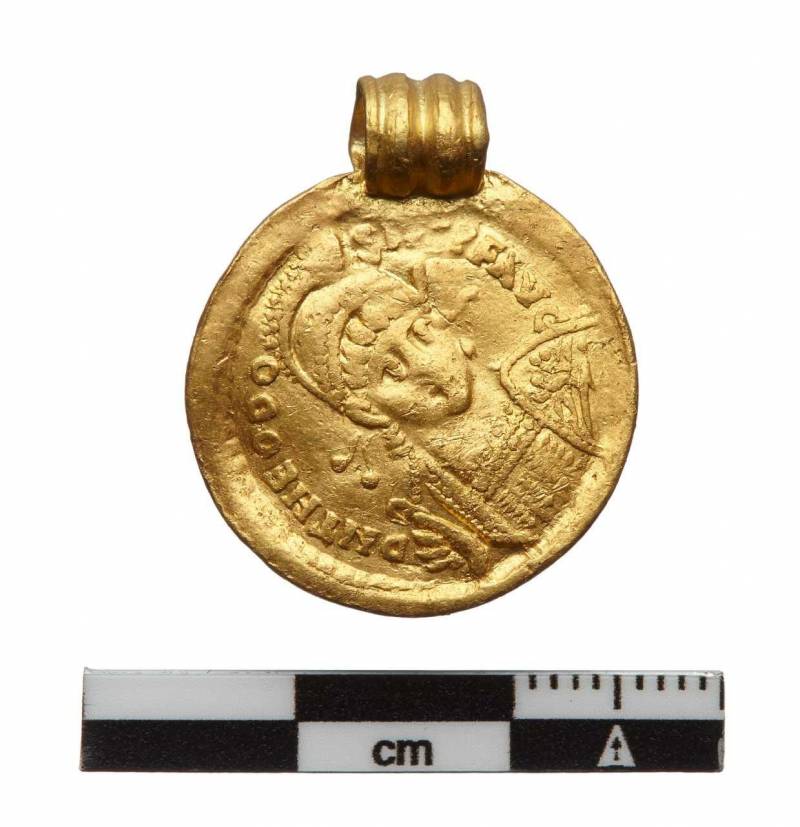 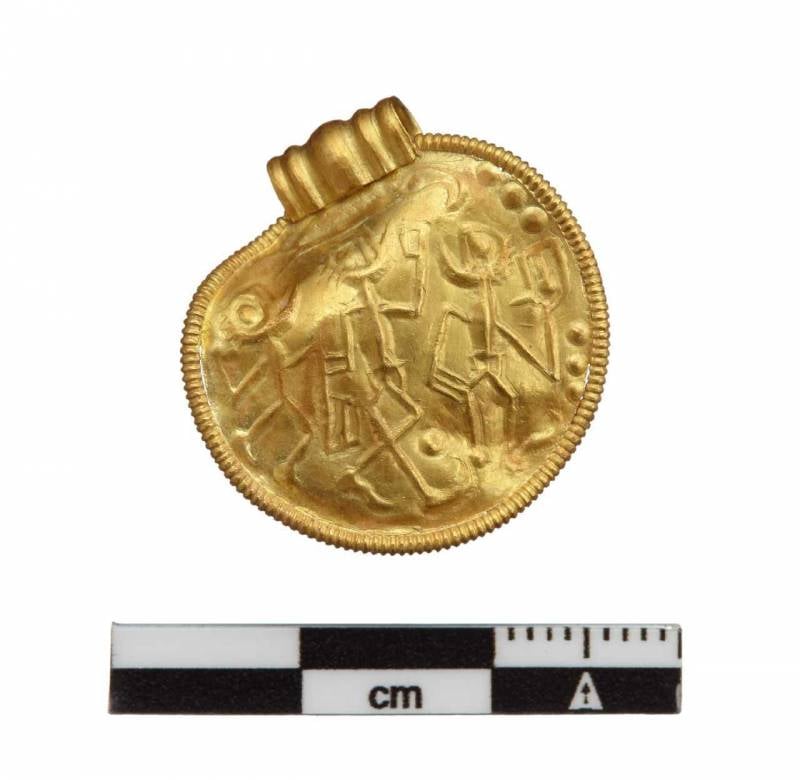 Gold pendant. Found in Hvorslevgard, Jutland. OK. 500-540 National Historical Museum, Copenhagen
Like all barbarians, the Germans loved jewelry. Bracelets in the form of curled snakes with eyes made of rubies, beads, earrings, pendants, brooches, hairpins - all this could be made of bronze and gold. So compared to them, the same Romans looked very modest, and even patricians of the era of the empire. Checkered, bright fabrics from which tunics and trousers were sewn, patterns in the form of runic signs embroidered on clothes, again long trousers and long narrow sleeves, the use of fur, an abundance of bronze and gold ornaments - all this made them incomprehensible and “alien” to the Romans !

Author:
Vyacheslav Shpakovsky
Articles from this series:
Bull skin and wooden slippers: clothes of hunters and warriors of the Stone Age
Ancient Egypt: clothing of the pharaohs, warriors, peasants