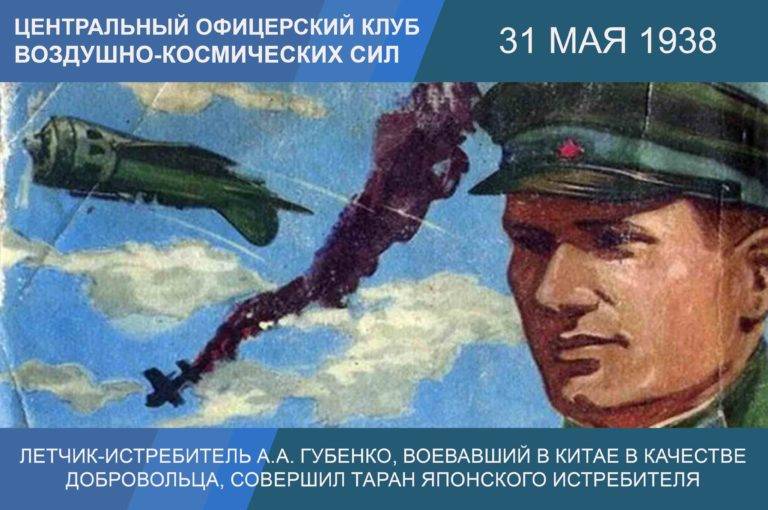 The war in the Far East once again thundered in the summer of 1937, when Japan invaded China. The fighting began in July 1937 and continued until the end of World War II. The help to the Republic of China was provided by the Soviet Union, which sent its military specialists to the country, including pilots. In March 1938, Anton Gubenko arrived in China, becoming one of the pilots of the Nanchang fighter aviation groups.


In the Chinese sky, he won several air victories, the most famous of which was the ram on May 31, 1938. This event made an indelible impression on the Japanese themselves, who dubbed the ramming pilot a “Russian kamikaze,” calling the pilot of another country “the son of the sacred wind” (kamikaze). The international press also wrote about the successful ramming: in Japan - with a certain fear and apprehension, in Germany - with indignation, in the UK - kindly, in Canada - with enthusiasm.

How Anton Gubenko came to aviation

Anton Alekseevich Gubenko was born on January 31 (February 12, according to a new style) in 1908 in the small village of Chicherino, located in the Volnovakhsky district of Donetsk region, into an ordinary peasant family, he is Ukrainian by nationality. Already in the early 1920s he moved to his brother in Mariupol, where he graduated from the seven-year plan, as well as the factory-apprenticeship school (FZU).

In these years, the life of Anton Gubenko was the ordinary life of a simple Soviet worker. At the same time, Anton was actively looking for his place in the world. In Mariupol, he managed to work at the railway station, as well as on the ships of the Azov Shipping Company. Six months later, he worked on the Black Sea coast of the Caucasus, being a dolphin hunter. In those years he was attracted by a thirst for travel and new experiences. From the Black Sea coast of the Caucasus, Gubenko again returned to Mariupol, where he worked as a mechanic's assistant for another six months until Anton noticed a newspaper article about recruiting pilots for school. 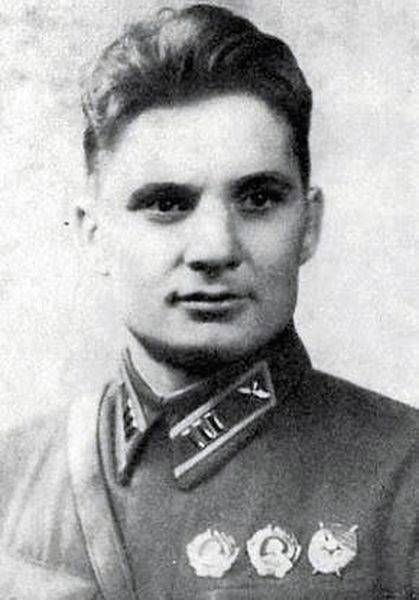 Anton Alekseevich Gubenko
The idea of ​​becoming a pilot captured the young man, and he wrote a statement to the Komsomol district committee asking him to be sent to a flight school. Already in May 1927, Anton Alekseevich arrived in Leningrad and entered the Leningrad military-theoretical school of pilots. After completing his studies in Leningrad in 1928, he entered the 1st Kachinsky Military Aviation Pilot School, which he successfully graduated in 1929.

As aviation major general Pyotr Stefanovsky noted, Anton Gubenko was not one of the light cadets, but he was very purposeful, striving ahead, ahead of the training program and always wanted and wanted to fly. According to Stefanovsky, Anton Gubenko knew the theory very well and flew superbly, which allowed him to make a successful career in the Soviet Air Force. Peter Stefanovsky believed that the qualities of Gubenko were innate, he was a pilot from God. At the same time, Anton never tired at the airport, which only confirms that he liked the business he was doing.

Best of all, the quality and aspirations of the young pilot reflects an episode from his training biography, which was described by Major General Stefanovsky. Making a landing after heavy rain, Anton Gubenko could not stop the plane, which rolled out of the runway and landed its wheels in a pit, after which it rolled over. For the pilot, this episode could end in death, but by and large it escaped with only fright. When the airport staff ran up to the plane, the pilot hung upside down on parachute belts. Instead of swearing and a perfect mat, which could be heard from a person in this situation, Gubenko calmly asked: "But the second flight will not go wrong?"

The beginning of an army career

After completing his studies at the flight school, Anton Gubenko went to serve in the Far East, where he gradually gained experience and skill. At the beginning of his service he was a junior and senior pilot, then a flight commander. In 1934 he became commander of an aviation detachment in the 116th fighter aviation squadron of the Moscow military district. After some time, he will become an instructor in the piloting technique of the aviation brigade and will be directly involved in the testing of new aircraft.

I-16 fighter type 5, which participated in the battles in China in 1938
In the summer of 1935, Anton Gubenko was appointed the leading pilot in conducting military tests of the new Soviet I-16 fighter. At the final stage of testing a new combat vehicle, Gubenko performed a flight aimed at identifying the ultimate loads of the fighter’s design. At the same time, the tests themselves were completed one and a half months ahead of schedule, and Anton Gubenko was awarded the Order of Lenin for the successful testing of a new combat vehicle in May 1936. In total, the future Hero of the Soviet Union took part in tests of 12 types and modifications of new Soviet aviation equipment.

At the same time, Gubenko not only flew on a new fighter, but also managed to make several rational proposals aimed at improving the quality of the combat vehicle, which were taken into account by the designers. At the same time, the command spoke flatteringly about Anton, calling him a pilot of a new, modern formation. By that time, there were 2146 aerobatics behind him, and the total flight time on different types of aircraft was 884 hours, during which time the pilot successfully made 2138 landings and had no accidents and breakdowns. At the same time, Gubenko was a very experienced parachutist-instructor, having made 77 jumps, 23 of which were experimental, and two more were made at night.

It is believed that in the 1930s Gubenko witnessed a plane crash when, during takeoff, the young pilot did not notice the plane in front of him and chopped off the tail of the front plane with a screw. The car received serious damage that would lead to a disaster in flight, and the plane of the culprit of the accident remained intact. What he saw led Anton Gubenko to the idea that such a "trick" could be cranked up in aerial combat, as the last and most extreme measure in the fight against the enemy.

On March 13, 1938, Captain Anton Gubenko, as part of a group of Soviet pilots, was sent to China, which at that time was already at war with Japan. The Soviet Union sent the best and most trained combat pilots to China. In the Chinese sky, Gubenko fought as part of the Nanchang fighter group, led by Lieutenant Colonel Blagoveshchensky. Soviet volunteers had to not only fight with the Japanese, but also help the Chinese prepare national flight personnel, for which several flight and instructor schools were opened in China at once.

So for Anton Gubenko a new page of life opened up - participation in real hostilities. In the Chinese sky, a Soviet pilot fought from March to August 1938, having shot down 7 enemy aircraft during this time. So in the battle on April 29, 1938, reflecting the enemy air raid on the city of Hankou, Anton Gubenko saved his combat comrade Senior Lieutenant Kravchenko. During the battle, Gubenko noticed how a Japanese fighter was chasing a damaged Kravchenko plane and rushed to help, even though he himself had already run out of ammunition by this time. 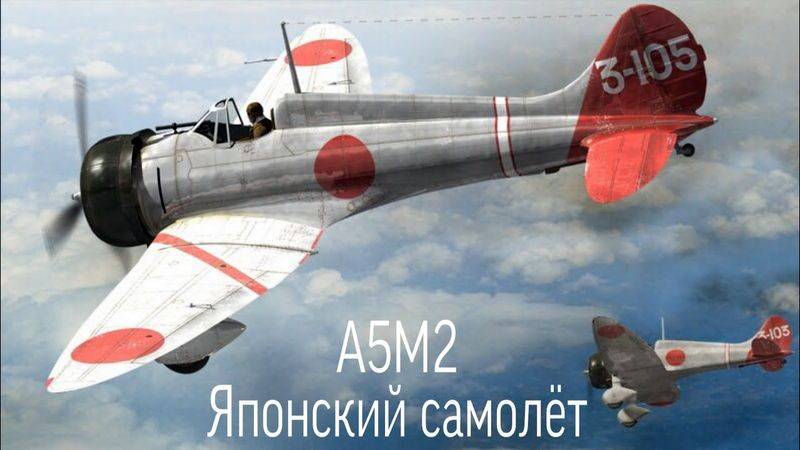 Anton caught up with the Japanese fighter and maneuvering and imitating attacks managed to drive him away from the damaged comrade’s plane, after which he accompanied the fighter Kravchenko until the time of the emergency landing. And when on June 26, 1938, the I-15bis Gubenko fighter was shot down by the enemy and the pilot had to throw himself with a parachute, Kravchenko himself was already covering his comrade from attacks by the Japanese until the landing.

The most famous episode with the participation of a brave Soviet pilot occurred on May 31, 1938. On this day, at 10 a.m., as part of an I-16 fighter group, Captain Anton Gubenko flew out to intercept a large group of Japanese combat aircraft, numbering 18 bombers and 36 escort fighters. All Soviet and Chinese pilots took part in the reflection of this large-scale raid on Hankou. The battle in the sky started directly on the outskirts of the city.

Already at the end of the air battle, when Gubenko used up all the ammunition, he unexpectedly discovered the A5M2 fighter lagging behind the rest of the Japanese forces and decided to try to force him to land on the Chinese airfield. Having flown close to the enemy fighter, Gubenko tried to order him to land by signs, but the Japanese decided to break away from the Soviet fighter and leave. Having made a coup through the left wing, the Japanese fighter increased speed, but Anton caught up with the enemy and again repeated the demand. Most likely, at that moment, the Japanese pilot finally realized that his opponent did not even have ammunition and, ignoring his demands, quietly turned and flew in the direction he needed.

It was at this moment that Anton Gubenko decided to shoot down an enemy aircraft with a ram. Having flown close to the Japanese fighter, Gubenko propelled the enemy’s aircraft on the left wing aileron, as a result of which the A5M2 lost control and crashed to the ground, which was soon confirmed by the Chinese command. At the same time, the I-16 Gubenko did not receive serious damage and safely landed at the airport. The case received publicity in the press and was widely covered in China. For this air battle, Captain Anton Gubenko was awarded the Golden Order of the Republic of China, while Chiang Kai-shek held a personal meeting with the Soviet pilot, after which he hosted an evening reception in honor of the Soviet pilots, placing airmen in the best hotel in Hankou on the Yangtze River.

Death in a plane crash

During his stay in China from March to August 1938, Anton Gubenko made more than 50 sorties on I-15bis and I-16 fighters, having a total of 60 hours of combat flight. The pilot took part in 8 air battles in which he shot down 7 Japanese aircraft. After returning to the USSR, Gubenko was awarded an extraordinary military rank, while he immediately became a colonel. After conferring a new rank, Anton Alekseevich began preparing for admission to the Air Force Academy, but was immediately recalled before passing the exams and was sent by the Air Force Directorate to the Belarusian Special Military District on August 8, 1938 for further service as deputy commander of the district’s aviation. 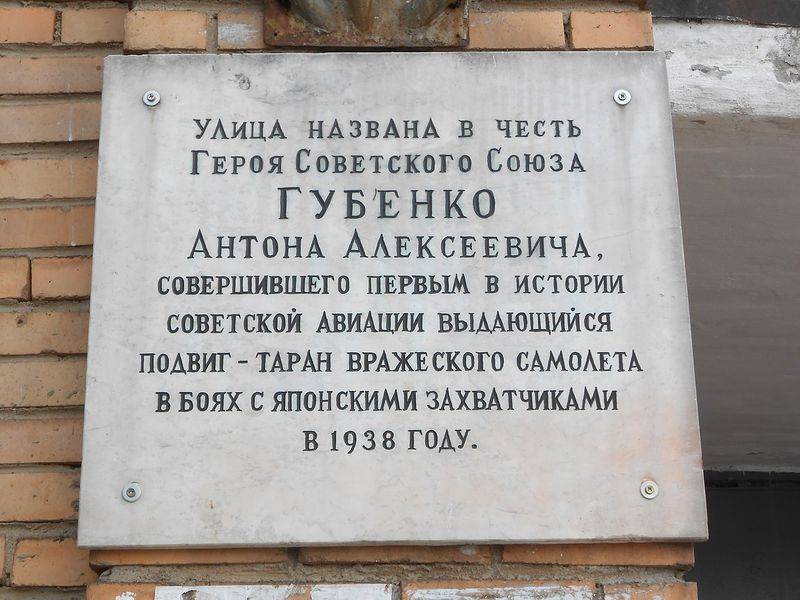 Annotation board on Gubenko street in Smolensk
In February 1939, Anton Alekseevich Gubenko was introduced to the rank of Hero of the Soviet Union for the courage and bravery shown in battles with the Japanese in the Chinese sky. Ahead, the brave Soviet pilot ace could have had a successful military career, but the commander valuable to the Soviet Air Force tragically died on March 31, 1939 in a plane crash that occurred during training flights with firing. He was buried in the Polish cemetery in Smolensk, in 1971 he was reburied in the square in memory of Heroes, located near the Smolensk fortress wall.