How the Chinese army train flamethrowers: shots from the training ground are shown 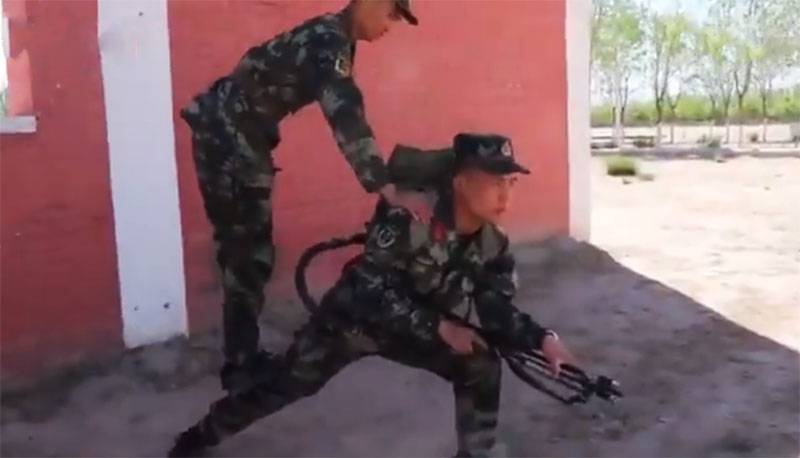 A video was published on the network with the training of military personnel of the People's Liberation Army of China (PLA), which draw special attention to themselves. The PLA demonstrated how the training of flamethrower fighters is carried out.


The frames show that while a fighter is made to fire at a conditional enemy, the most varied options for influencing him and his weapon have colleagues.

For example, in the initial shots, a soldier kicks the flamethrower from above. The following shows how, clutching the barrel, the fighter moves the weapon along with the one who holds it back and forth. It is also shown how a soldier climbs on his leg to a fellow soldier who was made to shoot while standing.

Another area of ​​training is that the two soldiers who are ready to fire are raised by two soldiers about a meter above the ground. One holds the man by the legs, the other grabbed the barrel of the weapon, directing him thereby towards himself.

Next, the video demonstrates single shooting at the firing range, as well as shooting as part of the squad of flamethrowers.

It is noted that this kind of training is aimed, inter alia, at developing confidence in the use of flamethrowers, so that the fighter holds his weapon tightly in his hands, including cases of intense fighting.

Ctrl Enter
Noticed oshЫbku Highlight text and press. Ctrl + Enter
We are
Reports from the militia of New Russia for 1 September 2014 of the yearDecember 2010 years. Russian March. Senseless and merciless? Notes not a Russian person
Military Reviewin Yandex News
Military Reviewin Google News
71 comment
Information
Dear reader, to leave comments on the publication, you must sign in.