And again, our business is the pipe? 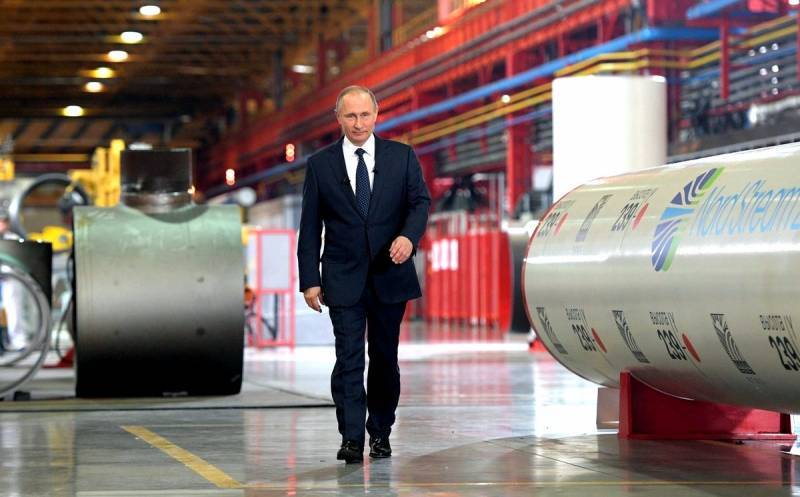 During the reign of Republican President Donald Trump, it seems that many understood that this overripe cowboy is best, as a yard boy, to take "weakly." Most recently, OPEC worked with a full range of advantages, and now continues to work on the second Nord Stream.

And Europe, in fact, should be especially grateful to Washington for the fact that everything that is happening with Russian gas is happening right now when the pandemic has brought down prices and the heating season is over. Yes, the agenda includes coronavirus, quarantine and self-isolation, more precisely, a smooth exit from it, as everyone now understands that it is both smooth and planned. But Europeans still do not want to remain without gas.

Ukraine has not just so quickly joined Hungary, where the gas problem does not exist at all. There, Prime Minister Orban, whom no one else calls the Kremlin’s agent and dictator, long ago received from Russia and Gazprom something like a gold card, which he uses.

At the same time, I tried to jump out of the snuffbox on the European gas scene to small Qatar, but it has very big difficulties with delivery to the old continent. Roughly the same as the U.S. with alternative LNG, under which there is simply a catastrophic lack of port terminals, which are much longer and more expensive to build than Nord Stream 2.

Germany, not forgetting at all about its role as EU leader, got into a difficult confrontation with the United States. Europe, sorry for the repetition, should not expect any large-scale deliveries of LNG from them for a long time. The authorities of the federal republic, by all indications, are determined to defend their almost exclusive right to Nord Stream 2 to the last.

American politicians responded with a powerful pressure on Berlin. The tone among them is set by the notorious lobbyist Ted Cruz, a Texas senator who recently vied with Trump for the right to be elected as President of the Republican Party. Sanctions from across the ocean are threatened simply regularly, and they clearly had a hand in ensuring that the Federal Grid Agency of Germany rejects the application for exempting the Nord Stream 2 gas pipeline from the EU Gas Directive.

Recall that the decision of the network agency was a complete surprise to the federal government, which openly supported Nord Stream 2.

With Danish greetings and Polish dziękuję

About Danish obstacles to construction, which we have already managed to overcome, we wrote on the pages of Military Review: “Danish gas games. Nord Stream 2 is queued up. But Polish gas problems worsened recently when Gazprom stopped the transit of blue fuel through this country. Poland’s response, hardly adequate, was to fan the hype around the alternative Baltic Pipe project. 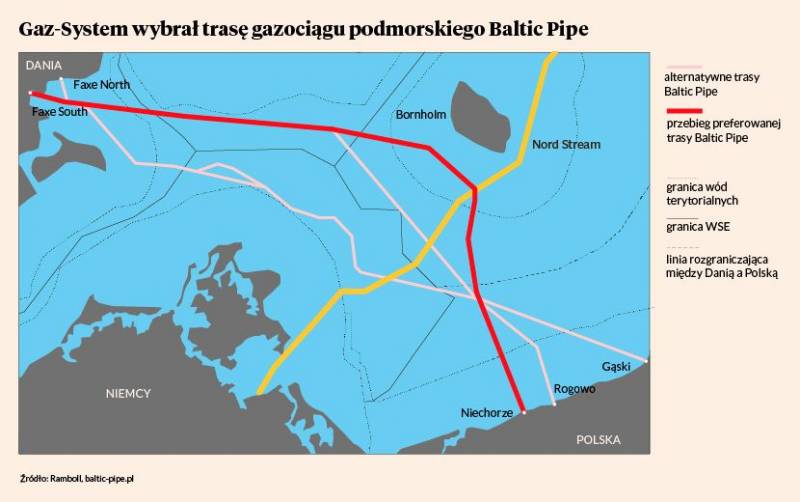 With unprecedented support from Washington, Polish politicians from among the Russophobia went to extremes. Starting with the formation of a block of dissatisfied countries with the participation of the Baltic countries, Ukraine, led, of course, with Poland, we agreed to the point that Nord Stream 2 could cause a war when Russia launches an attack on Ukraine.

It is good that the coronavirus helped a little to forget about this eerie maxim of Prime Minister Mateusz Moravecki. However, statements that Nord Stream 2 is nothing more than a “killer of Ukraine” can also be heard during self-isolation and quarantine, and not only from Polish lips. One of the experts very correctly called Baltic Pipe the same Polish song about the main thing: how to harm Russia.

Today, both Poles and Danes suddenly remembered that hundreds or even thousands of mines have been lying on the bottom of the Baltic Sea since the Second World War. What they say makes the laying of the remaining pipes not only difficult but impossible. Forgetting that Russia literally just gained invaluable experience in cleaning the seabed during the construction of the Kerch bridge.

Meanwhile, there can be no alternative - neither in terms of capacity, absolutely incomparable, nor in routes - the Polish pipe “Nord Stream 2”. Moreover, due to the fact that in any case Nord Stream 2 will be laid earlier than Baltic Pipe, the laying of a gas pipeline to Norway, more precisely, from Norway, will have to be coordinated with Gazprom and its project partners in one way or another.

Monopolists are not obliged. Nothing

General business easily makes allies even the most implacable enemies. The government of the federal republic regularly reminds all opponents of the project that in it the share of the Russian gas concern is by no means a monopoly. Although it is Gazprom that currently provides 100% supply of blue fuel into the pipe. However, who said that this alignment is forever?

In the summer of 2019, representatives of the Russian company Novatek, which has been struggling with Gazprom’s unlimited export priority for many years, spoke at one of the gas conferences on this occasion. They immediately made two original proposals in case Nord Stream 2 would be contrary to European antitrust laws.

The first is to allow Novatek to fill the pipe as well (but how could it be otherwise - Auth.), And the second is to build a terminal at the entrance to the large pipe to receive LNG. In response to a question, where in that case to put excess Gazprom gas, it was said: to scatter across Russia and the Baltic states. Moreover, there is still no excess of blue fuel there.

It is clear that the message made at one of the local sessions was not included in the conference materials. But the sediment does not seem to have disappeared. Nevertheless, it will be appropriate to recall here that the Nord Stream 2 project has not only a German operator - a company with the AG prefix to its main name, but also several partners at once.

Not Russian, mind you. These are the German companies Wintershall and Uniper, the Austrian OMV, the French Engie and the Anglo-Dutch oil and gas giant Shell. None of the consortium members at any stage of its implementation did not hide their readiness for closer cooperation with the Russian gas giant.

And more than once it came to realizing the long-standing idea of ​​the mutual entry of these companies into each other's capital. Characteristically, the main obstacle to this has always been Russian law, which continues to guard Gazprom’s natural monopoly.

Persistent marketers on this occasion do not get tired of repeating that in Russia Gazprom’s monopoly is natural. Do not you think that just this means that the problem of the necessary demonopolization of the project can be solved by purely market methods.

The reader has the right to ask: what? At the moment, it is recommended that the operator of the gas pipeline, mentioned above, of the German company Nord Stream 2 AG, reserve at least 50% of the gas trunk capacity for alternative suppliers. Alternative suppliers will either have to be looked for or somehow allocated, which again contradicts Russian law.

But even the most stringent law is not a dogma, if you really need it, you need to change it. Nevertheless, for some time Gazprom will have to adopt the European rules of the game and supply only 2 billion cubic meters of blue fuel per year through the Nord Stream 55 pipes instead of the project 27,5 billion.

It seems that in the conditions of global decline and demand and prices for hydrocarbon raw materials, such a prospect is far from the worst. Moreover, pipes still need to be laid. But on this occasion there are quite good news.

The other day it became known that two Russian ships had already entered German territorial waters, in close proximity to the unfinished section of Nord Stream 2. To the Akademik Chersky pipe-laying machine, who had made more than half of the round-the-world trip, when Gazprom even had to abandon the idea of ​​conducting ship through the Suez Canal and the Strait of Gibraltar, joined the barge "Fortune". 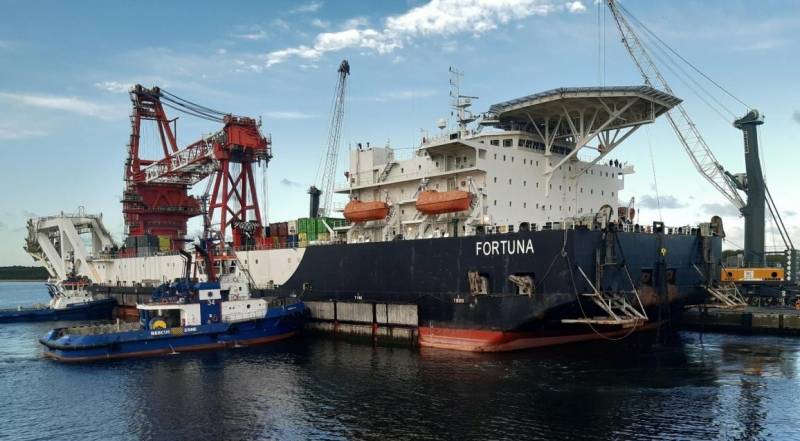 This pipe-laying barge belongs to the Russian company MRTS - Mezhregiontruboprovodstroy, which worked under water even in the Arctic. If the Akademik Chersky and Fortuna ships can start working without delay, it is possible to complete the construction of Nord Stream 2 in the fall of 2020.

Apparently, in the near future it is necessary to wait for some progress in the situation with the European Gas Directive, as well as new surprises from the United States and its allies. Indeed, the launch of Nord Stream 2, even at half capacity with falling demand, can save Gazprom from having to bargain for gas transit through Ukraine

Both ships will be re-equipped in order to be able to work with pipes of the desired diameter. Gazprom and its partners still have a huge time advantage, compared to the same Americans, due to the fact that all the pipes necessary for the completion of Nord Stream 2 are already located at the terminals of the port of Mukran.

The Nord Stream 2 trunk includes two pipelines from Russia through the Baltic Sea to Germany. Its total capacity should be 55 billion cubic meters of gas per year. At the moment, more than 2300 km of pipes from about 2460 km, that is, 94 percent of its total length, have been laid under the project.

The application required to withdraw the project from the EU Gas Directive was submitted by the participants to the Federal Network Agency long before the completion of the pipe laying. However, its consideration was repeatedly postponed. The regulator is currently not satisfied with the Russian monopoly on gas supplies, which, however, should not be discussed taking into account the participation in the project of several international commodity companies at once.

Ctrl Enter
Noticed oshЫbku Highlight text and press. Ctrl + Enter
We are
Situational analysis of the death of the MH17 flight (Malaysian Boeing 777), made on the basis of engineering analysis from 15.08.2014Results of the week. “In our cooperative, the board is always agreed”
Military Reviewin Yandex News
Military Reviewin Google News
106 comments
Information
Dear reader, to leave comments on the publication, you must sign in.