Under the flag of St. Andrew 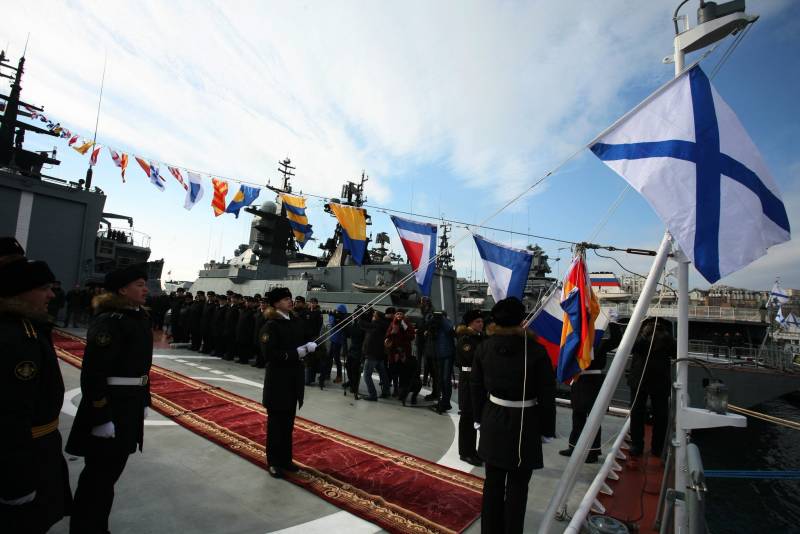 The ceremony of raising St. Andrew's flag on the corridor "Loud" of project 20380

St. Andrew's flag, which became the official symbol of Russian fleetIn Russia is familiar to everyone. The Russian naval flag proudly flutters on the warships of the Navy. Moreover, the St. Andrew flag itself has a very long and glorious historyin which Christian traditions, sovereign stories, examples of courage and heroism intertwined. Suffice it to say that for all the time the St. Andrew's flag voluntarily descended on Russian ships only twice. The second time this happened during the Tsushima battle, which became the blackest page in the history of the Russian fleet.

Why is the flag called Andreevsky

The flag is called St. Andrew in honor of St. Andrew, the Apostle and the first disciple of Jesus Christ. Thus, the origin of the flag directly refers us to the origins of Christianity. According to legend, St. Andrew the First-Called was crucified on a diagonal cross, which subsequently gave the name to both the cross and the flag. The Apostle was called the First-Called because he was the first whom Christ called to his disciples.

According to the history of early Christianity, Andrew was born in Bethsaida, located on the northern shore of the Sea of ​​Galilee. He was the brother of the Apostle Peter, both brothers were fishermen, which subsequently determined the protection of the brothers over sea trade. 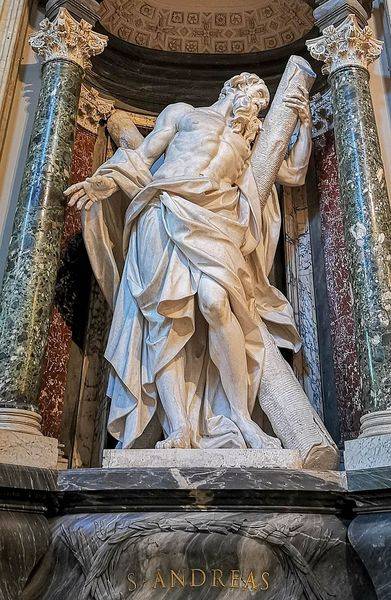 Statue of Apostle Andrew in the Lateran Cathedral in Rome

The first official flag, which contained the image of St. Andrew's Cross, was the flag of the Kingdom of Scotland. This event was preceded by a beautiful legend, according to which in 832 King Angus II, who led the combined army of Scott and Picts, defeated the army of the Angles, which was led by King Ethelstan. According to legend, on the night before the battle, Angus II prayed to God for the gift of victory, vowing that in case of a favorable outcome of the battle he would declare the holy Apostle Andrew the First-Called the patron saint of all Scotland. When in the morning the clouds formed an oblique cross over the battlefield, on which Andrei the First-Called was crucified at one time, the Scottes and Picts were inspired, and the Angles, on the contrary, were seized by anxiety. The Angus army, inferior to the Angles in numbers, achieved victory that day, and the apostle Andrew was proclaimed the patron saint of Scotland.

At the same time, the symbolism in the form of the St. Andrew's Cross was not used in any way for a long time. The first example of the use of this image dates back to 1286, it was contained in the seal of the Scottish Guard. The first image of a flag with a cross dates back to 1503, then the cross was located on a red background. The background change first occurred later, at least in the middle of the XNUMXth century. Since then, the blue, rectangular cloth with a white slanting St. Andrew's cross has remained the historical, official and state symbol of Scotland. After the unification of England and Scotland, the famous Union Jack appeared, combining the Scottish Saint Andrew and the English Saint George. 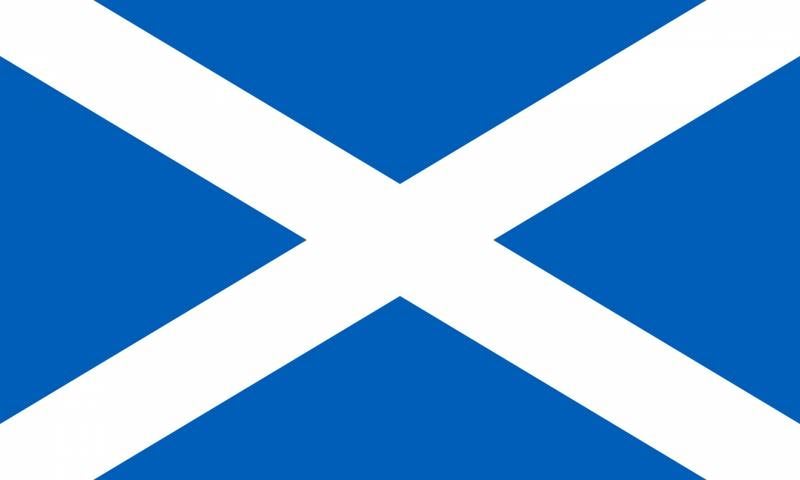 Flag of scotland
St. Andrew's flag was also found on the military and merchant ships of the Kingdom of Poland, which was formed in 1815 following the results of the Vienna Congress and became part of the Russian Empire. The cloth was a classic St. Andrew’s flag, which was used in the Russian Navy, only with a red canton placed in the upper left corner, which depicted the coat of arms of Poland - a crowned silver eagle. In this form, the flag lasted until the Polish uprising of 1830-1831, after the suppression of which, like all other state flags of the Kingdom of Poland, was canceled.

The appearance of the St. Andrew flag in Russia

In Russia, the St. Andrew flag appeared thanks to Emperor Peter I. This happened in 1699. The young Russian Tsar paid great attention to the development of the fleet, and participated in the creation of flags. Peter I presented the first two projects just in 1699, one of them contained an image of the St. Andrew cross against the background of three horizontal stripes. The choice was not accidental; Andrew the First-Called was a revered saint in the country. It was believed that he managed to visit the lands of future Russia before he received martyrdom. Since the XI century, the Holy Apostle Andrew the First-Called was considered the heavenly patron of Russia.

Already on December 1, 1699, the new flag with the image of St. Andrew's Cross was proclaimed by the Tsar as official for the Russian fleet. The first St. Andrew’s flag, which occupied the entire flag, appeared a little later - in 1710-12, and in 1720 it was finally confirmed in the naval charter. When writing the charter, Emperor Peter I gave the flag the following description: “The flag is white, across which there is a blue St. Andrew’s Cross, with which he christened Russia.” In the form that has become traditional for the Russian fleet, the flag lasted until the October Revolution of 1917. 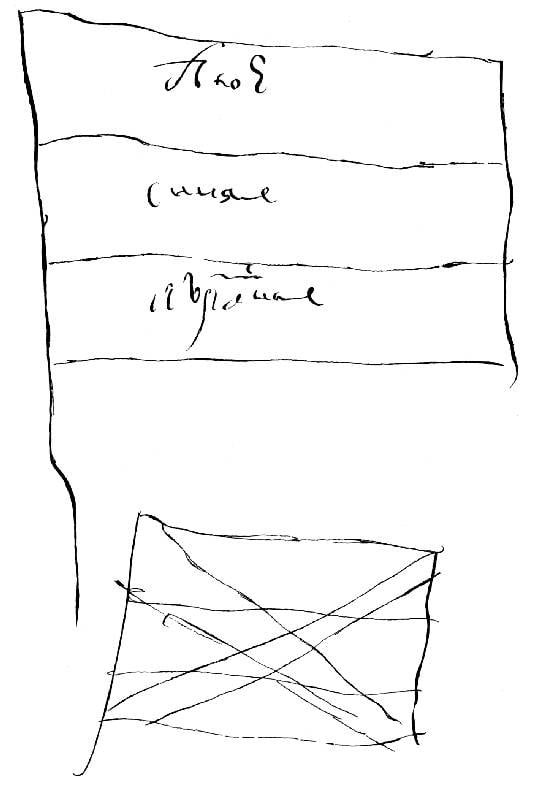 Outline flags made by Peter I in October 1699
It was restored as the official banner of the Russian Navy in 1992. An interesting fact is that from 1992 to 2000 the St. Petersburg fleet used the St. Andrew’s flag with a blue cross. The traditional and historical version with a blue Andreevsky cross on a white background in the Russian fleet was finally returned in 2001.

Andreevsky flag was lowered on Russian ships only twice

Volunteer Andreevsky flag on the ships of the Russian fleet only lowered two times in the history of its use. The first time this happened during one of the many Russian-Turkish wars, in this case - 1828-1829. On May 1, 1829, 2nd-rank captain Semyon Stroinikov lowered the flag on his frigate Rafail, not accepting a battle with the Turkish squadron, which consisted of 15 warships. He explained his decision by the desire to save the life of the frigate crew at the final stage of the war in battle, which could not affect its outcome.

Saving hundreds of the lives of officers and sailors, Stroynikov took the brunt of it. Emperor Nicholas I demoted Semyon Stroinikov to ordinary sailors, and also stripped the nobility. The very name of the frigate "Raphael" was covered in shame, the emperor ordered the ship to be burned when the opportunity presented itself. It was possible to fulfill this order after 24 years already during the Sinop battle. At the same time, the name "Raphael" was never used again as a name for the ships of the Russian fleet.

Stroinikov, who was also deprived of all his awards and titles, could no longer marry in order to “have no offspring of a coward and traitor in Russia”. The decision is rather strange, considering that by that time Stroinikov was already married, he already had two sons. Despite the case with his father, the sons of Stroinikov were able to freely obtain naval officer education, took part in the defense of Sevastopol during the Crimean War, and both reached the rear admirals by the end of their careers. 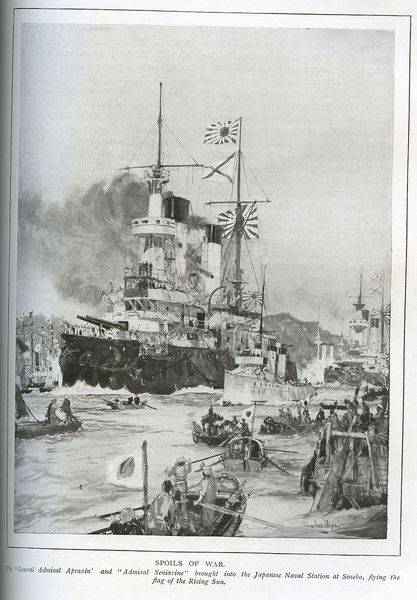 The painting, in which the captured "Admiral Apraksin" and "Admiral Senyavin" are introduced into the Japanese naval base in Sasebo
The second case of the descent of St. Andrew’s flags occurred during the most terrible tragedy of the Russian fleet - the Tsushima battle. At the end of the battle, Rear Admiral Nebogatov decided to surrender a detachment of ships headed by him, including the squadron battleships Orel and Emperor Nicholas I, as well as coastal defense battleships Admiral Senyavin and Admiral General Apraksin. In fairness, it is worth noting that the seriously battered Russian ships simply did not have any chance in a battle against superior Japanese forces the day before. Japanese forces were superior to Nebogatov’s detachment in speed and range of artillery, and Russian armadillos simply couldn’t reach the enemy, almost all artillery was knocked out on ships, and the shells were almost completely used up. Of the entire detachment, only the cruiser of the 2nd rank “Emerald” escaped, which, thanks to speed, managed to break through the ranks of the Japanese fleet and break away from the pursuit.

As Stroynikov had previously, Nebogatov explained his act by the desire to save thousands of lives, the sailors and officers entrusted to him. As in the 1906th century, the punishment was severe. The admiral was deprived of all ranks, after which they were put on trial, which already in 10 sentenced Nikolai Ivanovich Nebogatov to death, commuted to XNUMX years in a fortress. After serving a little more than two years in prison, the former admiral was released by Emperor Nicholas II due to poor health.

After the October Revolution of 1917 in Russia, the small minesweeper Kitoboy and its crew went down in history, displaying exemplary courage. In 1920, the ship, commanded by Lieutenant Oscar Fersman, escaped from Estonia, fearing possible seizure by local authorities. Andreevsky flag was hoisted on the ship. The minesweeper team “Whalers” decided to go to the Wrangel troops in the Crimea, for this the ship had to go all over Europe. On February 27, the ship entered Copenhagen, where there was already a strong British squadron, the command of which ordered the Russian minesweeper to lower the flag, since Great Britain no longer recognized it. In Soviet Russia, the flag was canceled in November 1917. 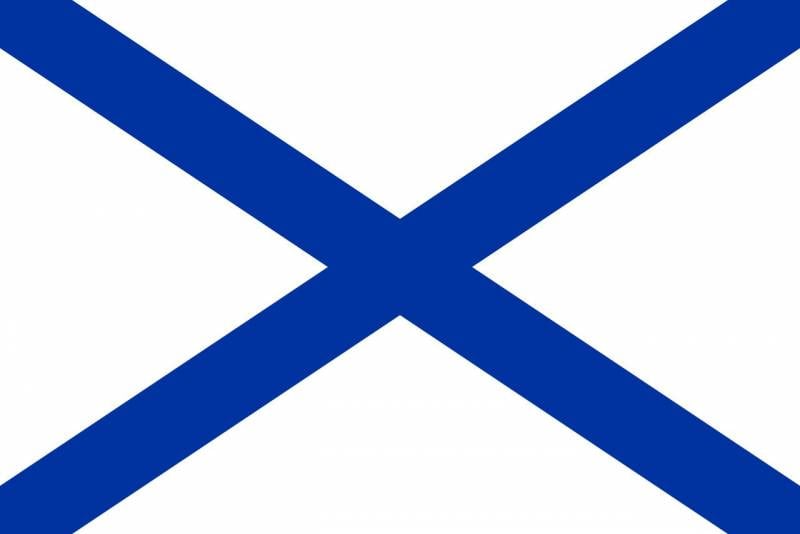 Modern view of the naval flag of the Russian Federation
The minesweeper commander responded with a firm refusal to the British demand, announcing that he would fight, but would not lower the flag. At the same time, only two guns were installed on board a small ship. The emerging conflict was resolved only after the personal intervention of Empress Maria Feodorovna, who at that time was already in Copenhagen. With her direct help, the ship was stocked with coal and necessary foodstuffs and released from the port. In the end, the “Whalers” safely reached Sevastopol on their own, which later left, along with other warships of the Black Sea Fleet during the evacuation of Wrangel’s troops from the Crimea.

Ctrl Enter
Noticed oshЫbku Highlight text and press. Ctrl + Enter
We are
He was lowered only twice ... History of St. Andrew's flag11 December 1699 Peter I established the St. Andrew’s flag as the official flag of the Russian Navy
Military Reviewin Yandex News
Military Reviewin Google News
68 comments
Information
Dear reader, to leave comments on the publication, you must to register.