The cost of Mistral and UDC domestic construction: analysis 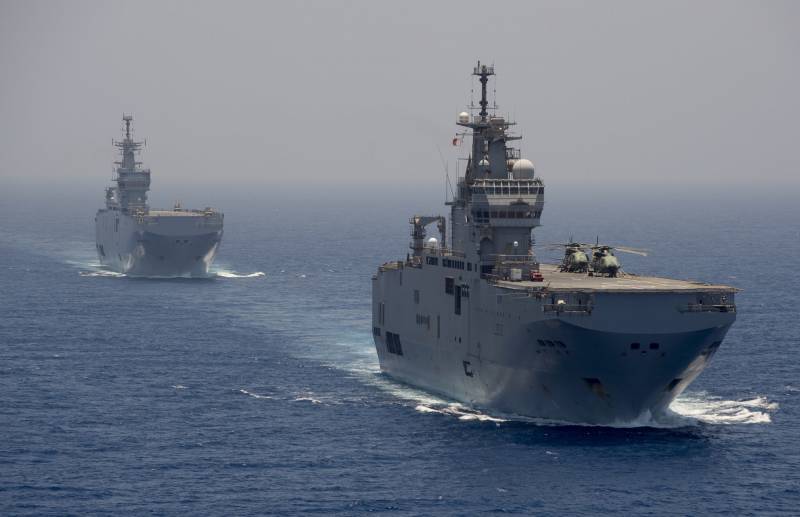 Recently, an article by S. Yuferev “Twice as expensive as the Mistral.” Two universal landing ships for the Russian Navy ", in which the respected author came to the conclusion that the UDC planned for the bookmark will cost our the fleet more expensive than Mistrals ordered in France. Although not doubled, about 10% percent, approximately, but still.


Let's try to understand the comparative cost of Mistral and new domestic UDC.

The logic of S. Yuferev is very simple. With a contract value of 1,2 billion euros, the acquisition of Mistral cost us approximately 49 billion rubles, while today the estimated cost of the contract for 2 UDCs, which are planned to be built on the Black Sea Gulf, is 100 billion rubles. That’s the double difference! True, the author immediately makes a fairly fair reservation about changing the ruble against the euro and makes a new calculation. At the average rate for 2020, it turns out that our UDCs cost 1,317 billion euros, which is still more expensive than the contract for the supply of French ships.

Everything seems to be true, but, unfortunately, the author missed one very important point. The fact is that not only the ruble, but also the euro was subject to inflation.

The fact is that inflation is an integral feature of a market economy. Moreover, its small size is considered an unconditional good, as it does not allow money to “stagnate” and makes them “work”. The logic here is very simple: if there is no inflation at all, you can put money in a stocking and keep it there for as long as you want. Nothing will happen to them. But if there is at least slight inflation, then the purchasing power of money will be slowly lost. That is, over time, the money from the stocking will turn out to buy less and less goods. This, according to the logic of a market economy, will force you not to store money in a stocking, but to invest it, or at least put it in a bank that will do it for you.

So, the euro is subject to inflation. The transaction with Mistral was concluded by the Russian Federation in June 2011, and then it cost 1,2 billion euros. But what would happen if the Russian Federation tried to conclude a similar deal now? The inflation calculator shows that the purchasing power of the euro from June 2011 to December 2019 (alas, you can’t find out for today) has decreased significantly: today you could buy as many goods as 1000 euros as needed in June 2011 spend only 900,32 euros. Thus, if we concluded a deal on Mistral in December 2019, then two French UDCs would cost us 1332,9 million euros. And if we concluded this deal right now, it would be even more expensive, because for the period from December 2019 to May 2020, the euro inflation did not sit still.

At the same time, a contract for two UDCs of domestic construction was signed in May 2020, that is, when the value of the euro reached 80 rubles. At the exchange rate on May 27 (77,79 rubles / euro), the value of the contract is 1285,5 million euros. But even if we take it at the average rate for 2020, which on the same May 27 amounted to 75,95 rubles / euro, then in this case 100 billion rubles. will amount to 1316,7 million euros. In fact, UDCs are even cheaper - the fact is that the contract for their construction did not cost 100 billion rubles. and in the amount of "about 100 billion rubles."

That is, in comparable prices, UDCs of domestic production definitely cost us cheaper than French ones. But the numbers are still comparable - the difference we calculated is on the strength of interest, if not their share. Why so, because domestic salaries and prices for raw materials are not French at all? 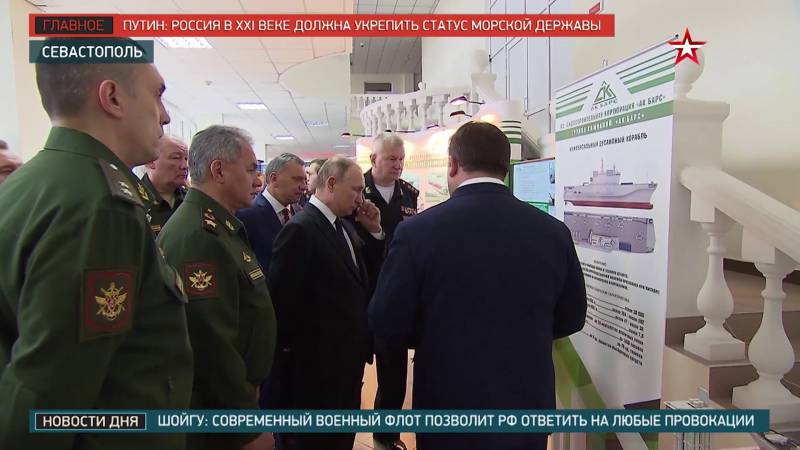 But it is indisputable that our ships will be much heavier than the French, and that's why.

It is known that our UDC have a large landing capacity - up to 1 marines and up to 000 units. technology against 75 and 900 at UDC "Mistral". Unofficial sources have repeatedly given information that the standard displacement of the UDC planned for laying on the Black Sea will be 60 tons. Perhaps this is not so: the figure is suspiciously similar to walking in the network of technical characteristics of the universal landing ship “Surf” developed by the Krylovsky State Scientific Center (KSCC). At the same time, it is known that UDK will be built in the Gulf according to the project of another developer - Zelenodolsk Design Bureau. Nevertheless, the author of this article assumes that the standard displacement of our UDC will indeed significantly exceed 25 tons and will approach 000 tons. Here's the thing.

Firstly, as mentioned above, our UDC is more capacious. Secondly, the Mistrals were built according to the canon of civil shipbuilding, which our military would hardly have done, designing the UDC from scratch. It can be assumed that the underwater protection of domestic ships is much more powerful than that of the Mistral. The increased width of our ship, relative to its French “colleague”, also hints at this. Thirdly, the Mistral developed a maximum speed of 19 knots, and it is very doubtful that our Navy would arrange such speed in a new project. The same "Surf" had 22 nodes. A high speed, and even with an increased width, obviously requires a much more powerful power plant. Fourthly, we recall that the Surf, apparently taking into account the wishes of the sailors, just meant transporting up to 1000 paratroopers and up to 75 pieces of equipment, but it had a standard displacement of 25 tons.

Finally, the most approximate estimates show that if the Mistral, with a length of 199 m, a hull width of 32 m and a total displacement of 21 t, has a draft of 300 m, then a domestic ship with its 6,3 m length, 204 m wide and draft It will have 38 m with more or less similar contours and even a lower fullness factor of no less than 7,5-28 thousand tons! Which, again, is very close to the UDC "Surf" indicator, which has a total displacement of 30 tons. 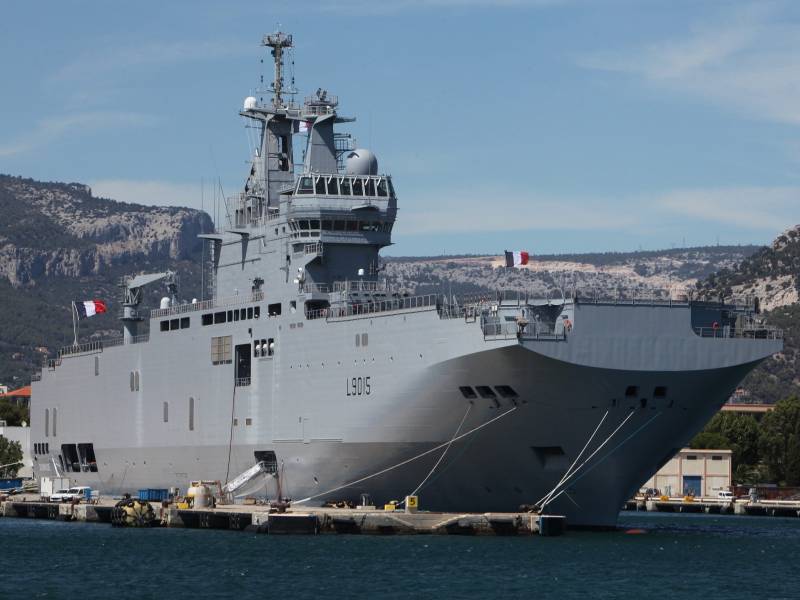 Thus, we are probably not too mistaken in assuming that the UDC planned for laying will have a standard displacement of 23-25 ​​thousand tons and a total displacement of 26-28 thousand tons. But this means that domestic universal landing ships will be at least 40% heavier than the Mistral!

But that is not all

Of course, as the respected S. Yuferev writes, we must not forget about the composition of the armament and on-board equipment that our new UDC will receive. The same "Surf" was supposed to be equipped with three ZRAK "Broadsword" and two "Armor-ME". The author does not know exactly what the new UDC will be armed with, but this should be taken into account.

The contract on the Mistral assumed their equipment with domestic weapons. In other words, in the amount of 1,2 billion euros of the cost of the contract concluded in June 2011, the cost of these weapons and a number of systems (such as communication systems) was simply not included - after all, domestic enterprises had to manufacture and deliver them. But in the case of the UDC, which will be built on the Black Sea, this cost is obviously taken into account: the “Gulf” will acquire armament and install it on ships, and of course, this will be paid by the RF Ministry of Defense, which means that it fell into the cost of the contract.

There is one more important aspect. World practice in the construction of warships shows that the lead ship is always more expensive than the serial one. So, the construction of the Mistral was put on stream by the French, and the French UDC built for the Russian Navy, although they had some design differences, were essentially serial ships. In our case, the Gulf will build one head and one serial UDC, which, obviously, should cost more.

It can be assumed that by concluding a contract in the amount of "about 100 billion rubles." For the construction of two UDCs, the Russian Navy will receive two ships, almost one and a half times heavier than it could order in France. Moreover, with weapons already included in the price of the contract, and not without it, as in the case of orders abroad. And it will cost about the same amount and even a little cheaper, despite the fact that the ships will be built according to a new project, and not according to proven serial technology.

Ctrl Enter
Noticed oshЫbku Highlight text and press. Ctrl + Enter
We are
On the comparative value of Russian and American warships, or Arly Burke against our corvettes"Svetlana". History of creation
Military Reviewin Yandex News
Military Reviewin Google News
109 comments
Information
Dear reader, to leave comments on the publication, you must to register.