Where did Russian planes come from in Libya? 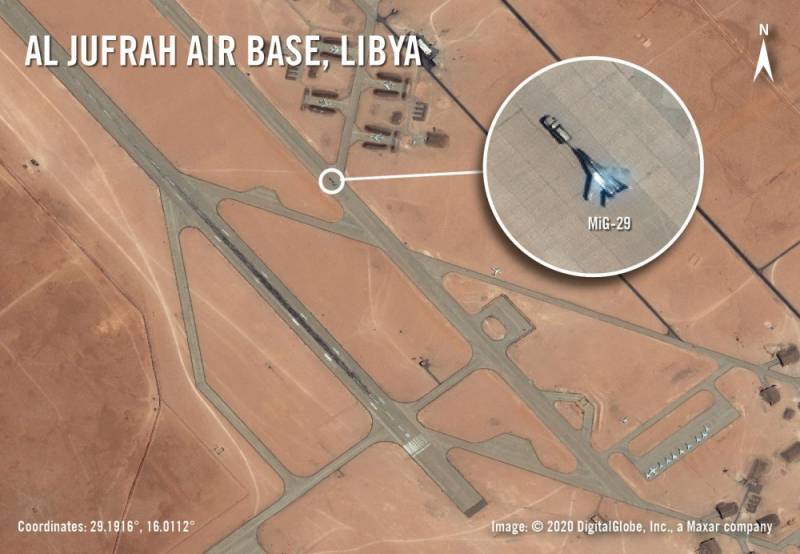 Maxar Satellite Image of Joufra Base

In Libya, the confrontation between the Government of National Accord (PNS) and the Libyan National Army (LNA) continues. The conflict is monitored by a number of foreign countries, and some of them even provide direct support to its participants. Russia is only following the Libyan events, but they are trying to accuse it of secret participation in the conflict on the side of the LNA. This time, evidence is given of photographs of certain aircraft at one of the Libyan bases.

On May 21, the PNS Ministry of the Interior announced that Russia had sent at least six MiG-29 fighters and two Su-24 bombers in support of the LNA. These aircraft have recently flown from the Khmeimim base to the Libyan airfield at Al-Jufra, controlled by LNA. Claimed that now aviation equipment can be used against the troops of the PNS.

On the same day, Maxar published satellite images of the Al-Jufra base, dated May 19. Several airplanes are visible at the airport, including previously absent MiG-29. This confirmed the information about the emergence of new technology in LNA.

On May 22, the LNA Air Force command announced "the largest air campaign in stories Libya. " The headquarters promised to inflict powerful blows on the facilities of the PNS and the Turkish army supporting it. The operation was about to begin "in the coming hours", but it still has not started for unknown reasons.

According to U.S. intelligence ...

On May 26, the US AFRICOM issued a press release on the latest developments around Russian-made equipment. The document described the American point of view on current events. 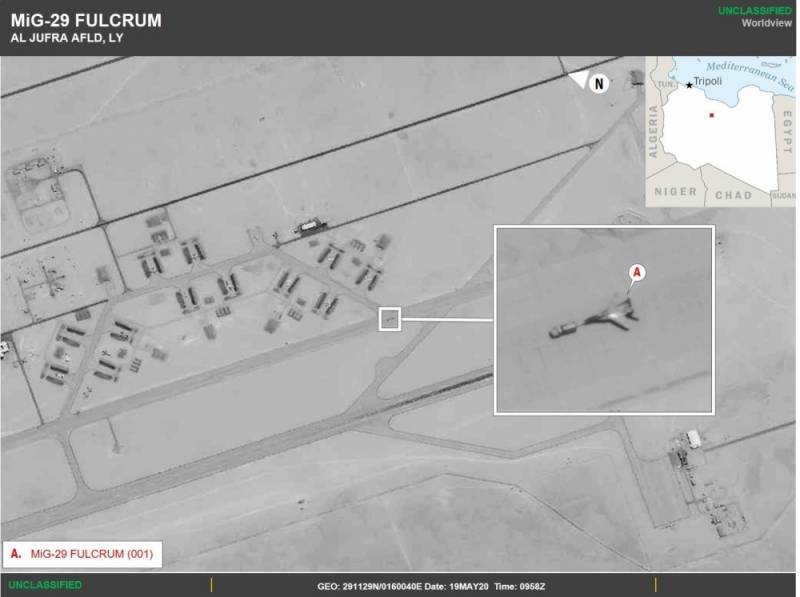 US AFRICOM press release snapshot
AFRICOM claims that Moscow has indeed sent planes to Libya. The purpose of the transfer is to support Russian private military companies involved in the Libyan conflict and supporting LNA. The planes flew from Russia with an intermediate landing in Syria, where they were masked by the previous identification marks.

The words of the head of AFRICOM, General Stephen Townsend, are given. He said that Russia is trying to change the situation in Libya in its favor, and for this it uses PMCs such as Wagner. For too long, Russia has denied any involvement in the conflict, but now it is useless. The United States observed all stages of the transfer of aircraft to Libya. In addition, without Russian help, the VLA or any PMC would not be able to operate such sophisticated equipment.

AFRICOM believes that Russia is not interested in ending the Libyan conflict and improving the situation of the Libyans. Instead, Moscow continues to advance its interests. The press release leads Air Force Commander in Europe and Africa General Jeff Harridgeian, who believes that after gaining access to Libyan air bases, Russia will deploy A2 / AD prohibition zones. This will create real risks on the southern flank of Europe.

On May 27, LNA reacted to aircraft information. Its spokesman, Ahmed al-Mismari, called the latest statements strange. In addition, there was a lack of logic in the fact that, noticing Russian fighters, the United States did not pay attention to the Turkish military presence in Libya. According to LNA, up to 17 thousand mercenaries from the Middle East fell on Libyan territory, whose task is to help PNS. 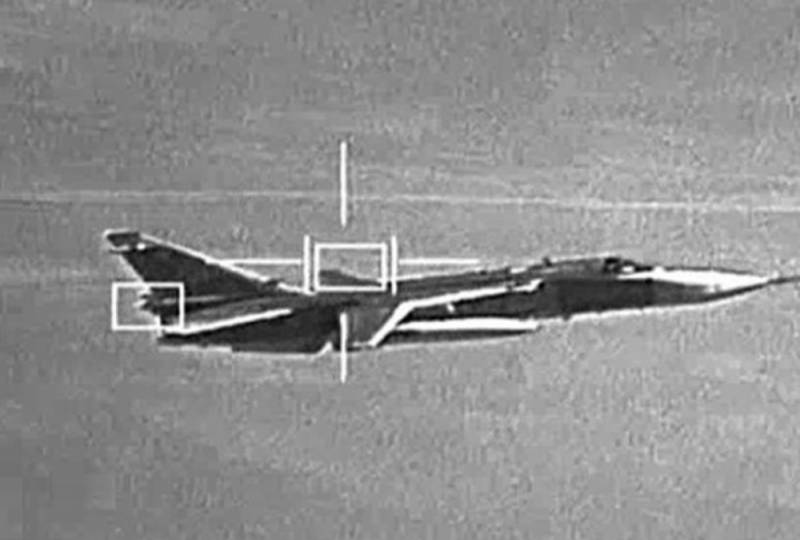 A snapshot of a Su-24 bomber allegedly related to recent events. Photo from US AFRICOM press release
On the same day, the "Turkish question" was raised by the American side. Pentagon spokesman Jonathan Hoffman said the United States is fundamentally opposed to any military action. He also called for peace for all - Libyan structures, Turkey and Russia. As for the “Russian trace,” J. Hoffman was unable to disclose new information about the aircraft found.

Russia's official position on the Libyan conflict has long been well known. Moscow condemns the conduct of hostilities and calls for the speedy restoration of peace. Accordingly, participation in hostilities in one form or another, or the support of warring parties, is excluded. With this position, the sending of combat aircraft LNA becomes impossible.

It should be noted that there are no direct indications of MiG-29 belonging to Al-Dzhufra belonging to the Russian Aerospace Forces. Only US AFRICOM took the trouble to present at least some evidence in the form of photographs of flying aircraft with Russian identification marks. However, such images are unlikely to be related to the Libyan events - especially those on which the Su-34 aircraft are captured. These photos could very well have been taken during the Syrian operation and cannot be considered as a real argument in the current dispute.

The version of the upcoming military assistance to the LNA by the type of the Syrian operation does not make sense, and also does not correspond to the observed processes. So, before the start of the VKS operation in Syria, the Russian side openly helped official Damascus for several years. Then, the Khmeimim base was organized as soon as possible, and then an official request for help followed, which was satisfied on September 30, 2015. From the first days, various types of aircraft, both relatively old and the most modern, were involved in the operation. 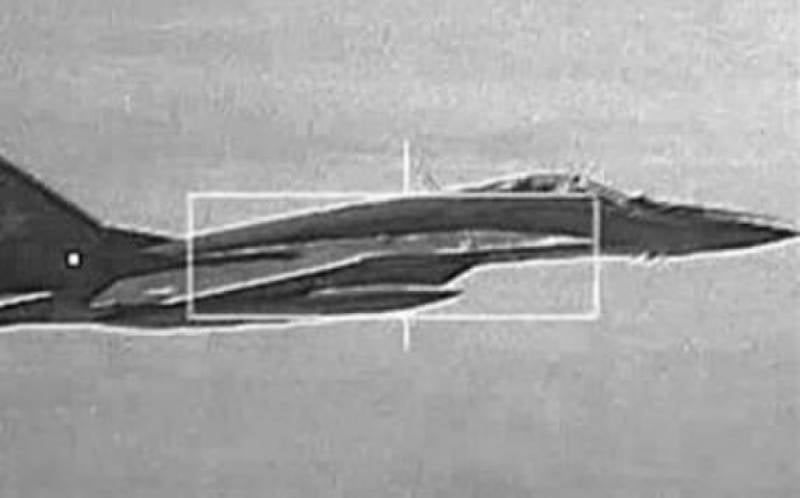 MiG-29 from the American press release
Russia does not provide military support to any of the parties to the Libyan conflict. Military supplies are not supplied, and the official position excludes them. Therefore, you should not wait for the transfer of aircraft to organize a full-fledged operation of the aerospace forces like the Syrian.

The Russian origin of new aircraft for LNA is virtually ruled out, but this should not be stopped. It does not hurt to find out which country could send its planes to Libya, as well as determine its benefits from this. It is curious that the first versions of this kind appeared almost simultaneously with the first statements about the appearance of the MiG-29 at the Libyan airfield.

The publication of The Aviationist on May 21 reviewed the available data on new Libyan aircraft. Referring to unofficial sources, it wrote about the recent flight of six MiG-29s and a Tu-154 leader aircraft from Russia to Iran, landing at an airfield near the Syrian border. Perhaps then these aircraft flew to Libya.

Also, from unofficial sources, there is a version according to which the Belarusian Air Force could be the former owner of the fighters. Considering this assumption, The War Zone recalls that the Republic of Belarus is armed with samples of Soviet and Russian production, and this country is also known for re-exporting weapons to states under sanctions. Another deal of this kind could well include the sale of the MiG-29 to the Libyan National Army.

There is also a version about the presence of an intermediary. LNA receives serious economic, technical and political support from the United Arab Emirates, Egypt and some other Middle Eastern states. Any of them could well acquire equipment from Belarus and transport it to Libya. The reasons for this are obvious: strengthening the LNA in the confrontation with the PNS improves their position in the region. 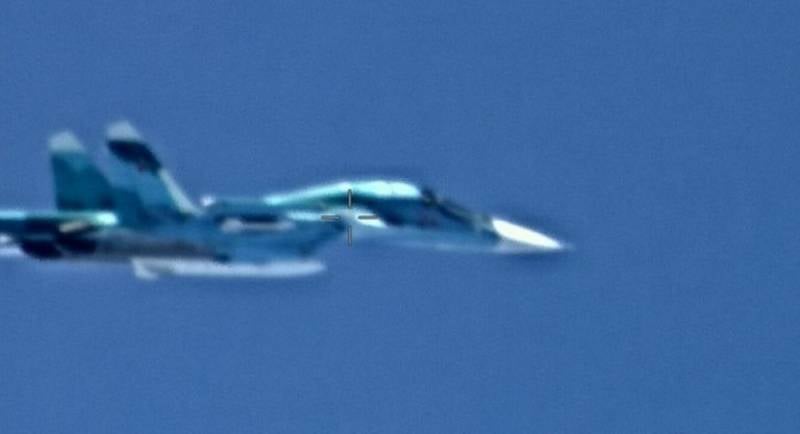 Another “evidence” of the Russian presence in Libya is the Su-34, not mentioned in any reports. Photo US AFRICOM
MiG-29 and Su-24 of various modifications were delivered to a number of foreign countries, and some of them later engaged in the resale of this equipment. LNA receives support from several states, and any of them could buy airplanes. Accordingly, the obvious “circle of suspects” is quite wide, but it is extremely difficult to enter Russia into it. The position of our country does not change and does not provide for military assistance to the parties to the conflict.

In the face of the PNS and LNA in Libya, the interests of several foreign states clashed, some of which no longer even hide their participation in the conflict. Both sides of the armed conflict, despite all efforts, are far from defeating the enemy, and the civilian population continues to suffer from fighting and related problems. At the same time, Russia demonstratively takes the most peaceful position and calls on the parties to reconciliation.

The current situation does not suit anyone, and its resolution is overly complex. In such circumstances, some countries may have a desire to accuse someone of dishonest actions or shift the blame for certain events.

The appearance of several new planes at the LAA naturally causes accusations from the Government of the people's consent. It enjoys the support of the United States, as a result of which accusations are already coming from Washington towards Russia. At the same time, as the LNA command rightly notes, the USA “does not notice” the activities of an allied Turkey.

Thus, in today's history, airplanes are only a formal reason for accusations and threats. In the absence of a MiG-29 or Su-24 deployed, any other actions — or even inaction — could become a similar reason. The basis of this situation is the politics and interests of specific states against the background of the general situation in the international arena. Peace in Libya and the safety of civilians are fading into the background.

Ctrl Enter
Noticed oshЫbku Highlight text and press. Ctrl + Enter
We are
Strengthening the military presence of China in the South China Sea through the construction of artificial islandsThe situation in Syria on Google Earth satellite images
Military Reviewin Yandex News
Military Reviewin Google News
81 comment
Information
Dear reader, to leave comments on the publication, you must to register.