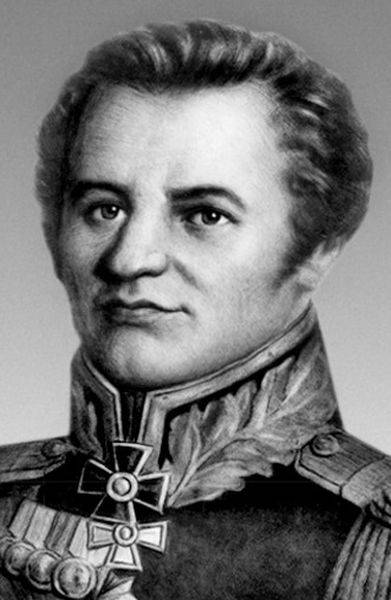 Alexander Dmitrievich Zasyadko (1779-1837) made an excellent military career, and also became famous for his work in the development of rocketry. In this area in Russia Zasyadko was a real pioneer. The powder rockets created by this artillery officer were superior to the English models in terms of flight range, and the machine developed by him for the simultaneous salvo of six missiles was the prototype of all modern MLRS. Unfortunately, a prominent designer and rocket master passed away relatively early. Received the rank of Lieutenant General Alexander Zasyadko in 1829, he resigned due to his health (wounds and hardships of military life affected) and quickly died away, having died on May 1834, 27 in Kharkov at the age of 1837 years.

The beginning of the military career of rocket master

Alexander Dmitrievich Zasyadko was born in 1779 (the exact date is unknown) in the village of Lyutenka on the banks of the Psel River (Gadyachsky district of the Poltava province). Zasyadko came from a family of Little Russian nobles, his father worked as a county treasurer in Perekop and was even noted in the second part of the pedigree book of nobles in the Poltava province. At the same time, the Zasyadko clan itself came from clan Cossacks inextricably linked with the Zaporizhzhya Sich.

Some sources indicate that among the closest relatives of Alexander Zasyadko were harmonica. Garmaches called a specially prepared category of Ukrainian Cossacks who mastered artillery and ensured the proper functioning of artillery. In any case, it was Alexander Dmitrievich Zasyadko who became the most famous artilleryman in the family, who rose to the rank of lieutenant general and took part in all the wars important to Russia at the beginning of the 1812th century, including in the Patriotic War of XNUMX.

Until ten years, Alexander lived in his father’s house, where he managed to get elementary education. At the age of 10, he was sent to Petersburg with his brother Danila, where he studied for eight years in the Artillery and Engineering Gentry Cadet Corps. It was in St. Petersburg that the foundation of Alexander Zasyadko’s knowledge in the field of artillery and fortification was laid. In 1797, both brothers Zasyadko together graduated from the cadet corps with the rank of lieutenant artillery and were sent to serve in the Kherson province as part of the 10th infantry battalion.

Together, the brothers fought during the Italian campaign of the Russian army in 1799. For two months of fighting, Alexander Zasyadko had to take part in hand-to-hand fights several times, during the battle a horse was killed three times under him, and also a shaky was shot two times. Moreover, in the battles, Alexander showed not only courage, but also good managerial skills. For one successful battle, Zasyadko was personally noted by Suvorov, who praised the capabilities of the young officer. And a little later, for the courage shown during the capture of the Mantua fortress, the famous Russian field marshal personally made Alexander Zasyadko captains. 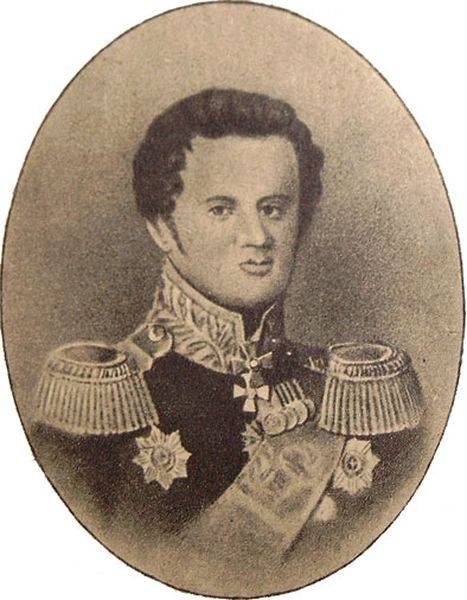 Later, the brothers took part in the landing on the Ionian Islands (Corfu and Tenedos) in 1804-1806, as well as in the Russian-Turkish war of 1806-1812, the Patriotic War of 1812 and the foreign campaigns of the Russian army of 1813-1814. In all battles, Zasyadko showed courage and remarkable officer talent. In memory of past battles, Alexander Zasyadko got numerous orders, a golden sword with the inscription "For courage", as well as a wound in the left leg. At the same time, Alexander took part in the battle of Borodino, being at the epicenter of the battle on the Raevsky battery, giving the gunners an example of personal courage and courage.

Alexander Zasyadko also participated in the famous battle near Leipzig in October 1813 (“Battle of the Peoples”). Colonel Alexander Zasyadko, who commanded the 15th Guards Brigade at that time, distinguished himself in battle and was presented to the Order of St. George of the third class for heroism. The award was all the more honorable, given that in the entire Russian army only two people were awarded this order to Zasyadko. For Zasyadko, “The Battle of the Nations” was marked by another important event. It was near Leipzig in 1813 that the British quite successfully used their powder rockets against Napoleonic troops. The appearance on the battlefield of a new weapons did not go unnoticed by the Russian command, especially artillery officers.

Creation of the first Russian rockets

The experience of using missiles in the battle of Leipzig was successful and impressed Zasyadko, who, after returning to Russia, set himself the goal of equipping the Russian army with new weapons. Work on the development of their own powder rockets, the production technology of which the British kept secret, Alexander Zasyadko began in 1815 on his own initiative and at his own expense. Zasyadko earned money for development and laboratory research by selling the small estate of his father inherited to him by inheritance near Odessa.

A diversified officer, well versed in artillery, and also paying great attention to self-development and the study of various sciences, including chemistry and physics, Zasyadko realized early enough that military missiles could be very useful for the army. Before the massive use of missile weapons on the battlefield, there was still more than a century. Zasyadko anticipated time. At the same time, a good knowledge of mechanics, physics and chemistry, as well as familiarity with the experiences of various European inventors in Dresden and Paris, allowed Zasyadko to realize his plan. 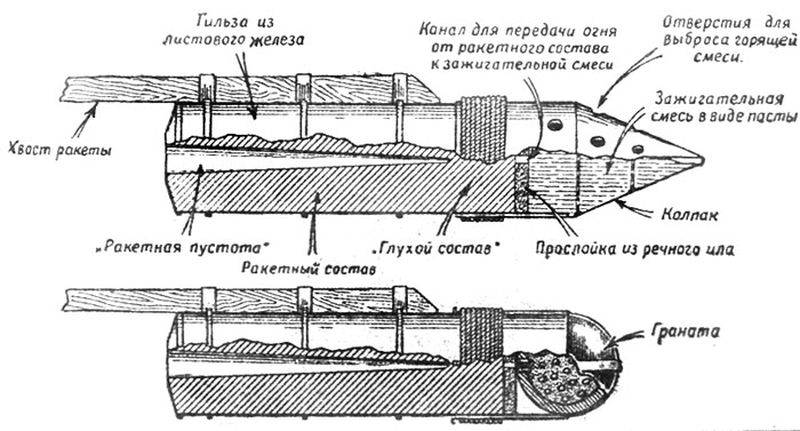 Combat missiles designed by A. D. Zasyadko: incendiary at the top, grenade below
It took a talented officer and inventor two years to present his military rockets based on fireworks. Changing their design and improving production technology, Zasyadko introduced a whole line of missile weapons with warheads of incendiary and high-explosive action. In total, the designer introduced rockets of four calibers: 2, 2,5, 3 and 4 inches (51, 64, 76 and 102 mm, respectively). After a large number of test launches, the flight range of the missiles was brought up to 2300 meters, and during official tests of new weapons in St. Petersburg the flight range of the 4-inch rocket reached 3100 meters, which exceeded the flight range of the best foreign missiles of that time period.

The successes of Alexander Dmitrievich did not go unnoticed. In April 1818, Zasyadko received another promotion, becoming a major general. And in 1820, Alexander Zasyadko headed the newly established Artillery School, later in the middle of the XIX century, the Mikhailovsky Artillery Academy would be created on the basis of the school. Zasyadko also became the manager of the laboratory, the powder factory and the St. Petersburg arsenal. There, in St. Petersburg, with his direct participation, a pilot production of the first Russian military missiles was organized.

To launch combat missiles, Alexander Zasyadko used a special machine, which initially almost did not differ from those used to launch lighting and fireworks. Later he improved the design of the rocket machine, which already consisted of a wooden tripod, to which a special launch tube made of iron was attached. In this case, the pipe could be freely rotated in a vertical and horizontal plane. Later, Zasyadko introduced a new machine with the ability to launch six missiles in a salvo simultaneously.

The first combat use of rockets Zasyadko

Organized in 1826 in the vicinity of St. Petersburg, a small plant for the manufacture of military missiles ("Rocket Institution") from 1826 to 1850 fired more than 49 thousand missiles of the Zasyadko system of various calibers, including high-explosive, incendiary and firing. For the first time, new Russian weapons were tested in combat conditions during the Russo-Turkish War in 1828. During the siege of the Turkish fortress of Varna, Russian troops first used a missile company, commanded by Lieutenant Pyotr Kovalevsky (future lieutenant general of the Russian army). The company was formed back in 1827 on the initiative and with the direct participation of Major General Alexander Zasyadko. An organizationally new unit was part of the Guards Corps. 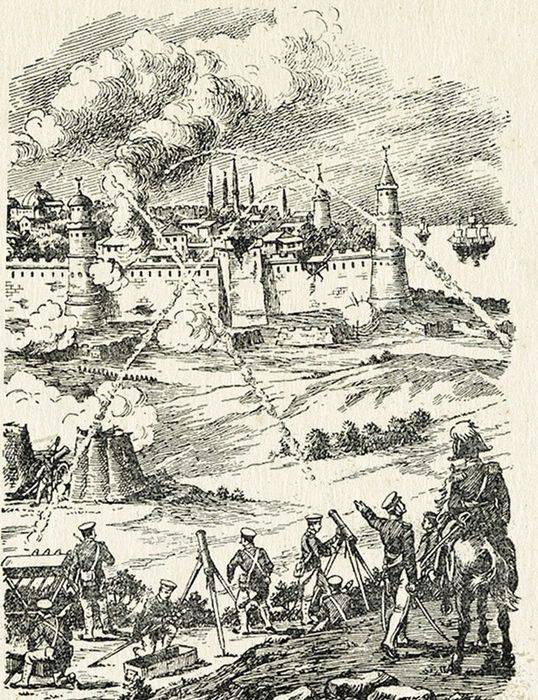 Rockets of the Turkish fortress Varna
The first missile company in the Russian army included 6 officers, 17 fireworks, 300 privates, while 60 of the company were non-combatants. The company was armed with three types of missiles and machine tools for them. Including 6 six-pipe machines for 20-pound rockets and 6 tripod machines for launching 12-pound and 6-pound rockets. In the state, the company was supposed to have three thousand combat missiles at once, both with a high-explosive and incendiary filling. The combat missiles that were designed by Zasyadko were used during the siege of several Turkish fortresses: Varna, Shumly, Silistra, Brailova.

The first combat experience of using rockets by the Russian army was on August 31, 1828. On this day, Zasyadko missiles were used to storm Turkish redoubts located by the sea south of Varna. Firing with new missile weapons, as well as field and naval artillery forced the Turks, who defended the redoubts, to take refuge in burrows dug in ditches. When the Russian troops launched an attack on the redoubt, the enemy simply did not have time to take up positions and put up organized resistance; as a result, the redoubt was taken in a few minutes with heavy losses for the Turks.

Later, as early as September 1828, rocket launchers consisting of batteries (usually two machines were included in the battery) were used during the siege and assault on Varna, which fell on September 29. In total, during the campaign of 1828, the first missile company in the Russian army consumed 811 combat and 380 incendiary missiles, most of which were spent near Varna.