Bioterrorism amid a pandemic 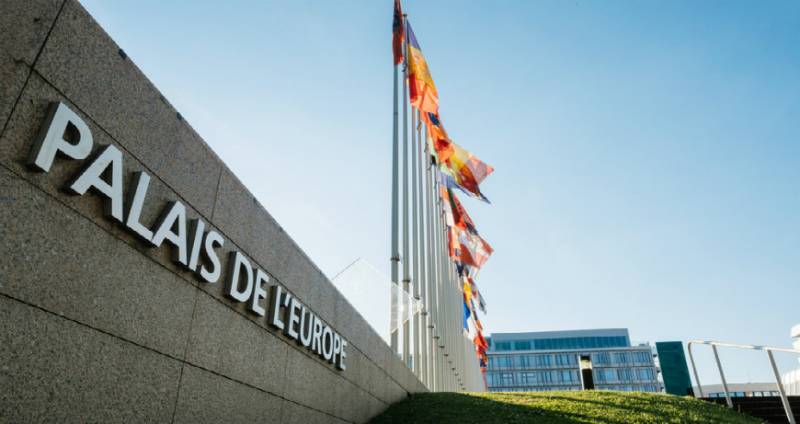 The main problem of the planet at the moment is the ongoing COVID-19 pandemic, causing enormous damage to the economy and population. However, the problem of terrorism remains relevant. The European expert community is currently trying to assess the risks associated with combining these threats in the form of biological terrorism.

According to the German publication Westdeutsche Allgemeine Zeitung, the Council of Europe Counter-Terrorism Committee has prepared a statement on the existing risks in the field of biological weapons and terrorism against the backdrop of the current difficult environment.

The committee points out that the current pandemic has demonstrated the vulnerability of modern society to viral infections. Apparently, terrorist organizations will draw conclusions, and new attacks will be biological in nature. Microorganisms, viruses, toxins, etc. can be used to defeat civilians or civilian infrastructure. 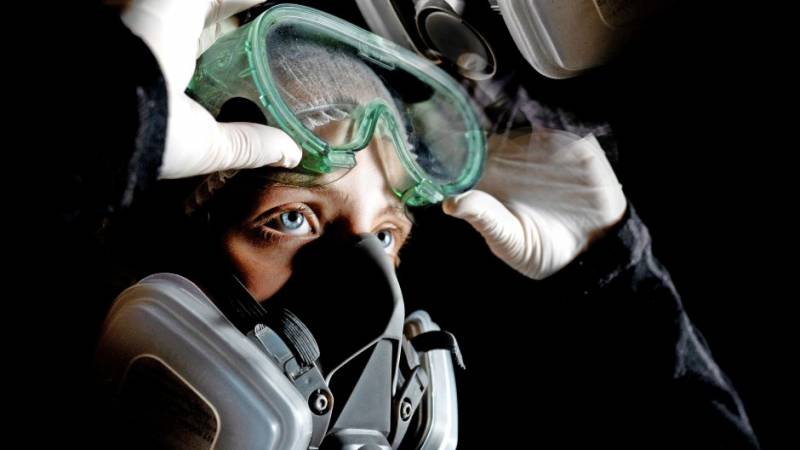 Photo: waz.de
The expert group of the Committee believes that the damage from such an attack can be much higher than with other types of attacks. Not only individuals will suffer from it, but also society as a whole. In addition, serious damage to the economy is expected. The ongoing pandemic increases the risks associated with bioterrorism. Structures designed to monitor the safety of people due to increased workload may not cope with the additional threat.

Extremists seem to understand the full benefits of biological attacks, but so far have limited themselves to loud statements. WAZ mentions a number of cases where representatives of radical movements from Europe, Africa or the United States called for deliberately infecting unwanted social groups or government services with the coronavirus.

The German newspaper recalls that the topic of bioterrorism is not being raised for the first time, incl. in the context of the current pandemic. Thus, the UN Secretary General Antonio Guterres recently called such extremist activity one of the main threats to world security. In addition, he noted that the development of a pandemic in the context of insufficient training of medical services shows what a real terrorist attack might look like. 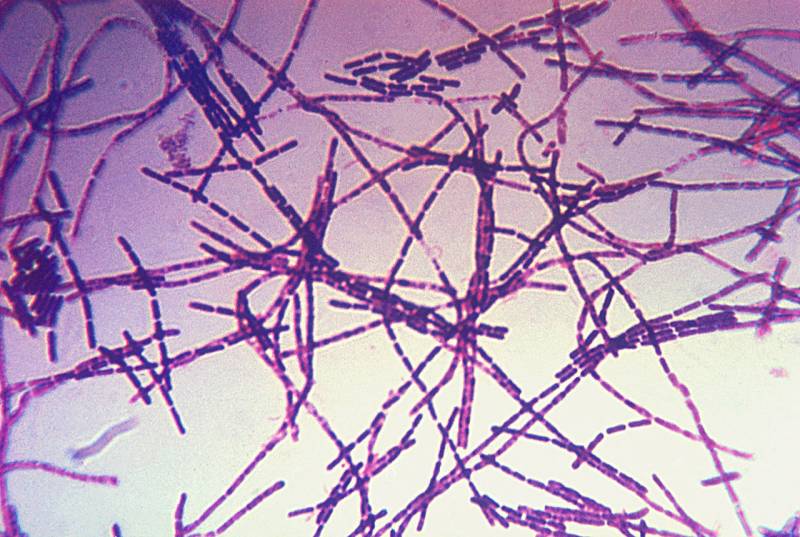 Anthrax bacilli after Gram stain. Photo: Wikimedia Commons
According to WAZ, issues of bioterrorism in the context of COVID-19 have already been discussed by NATO leadership. The alliance believes that a pandemic could provoke terrorists into action. In this regard, it is required to think over the necessary measures in advance.

However, the risks remain low. Unnamed German experts referenced by WAZ consider a biological attack unlikely. Special services do not record any preparations or other events indicating the possibility of a bacteriological or toxin attack.

The concept of bioterrorism involves an attack on the civilian population using biological weapons - for all its diversity. Biological weapons include microorganisms and viruses, bacterial and plant toxins, etc. Such agents are weapons of mass destruction and are prohibited for use by several international agreements.

Terrorist organizations are not inclined to comply with official documents, which leads to tragic consequences. There are a number of cases when extremists of one kind or another were preparing for terrorist attacks or using biological weapons against government agencies or the population. 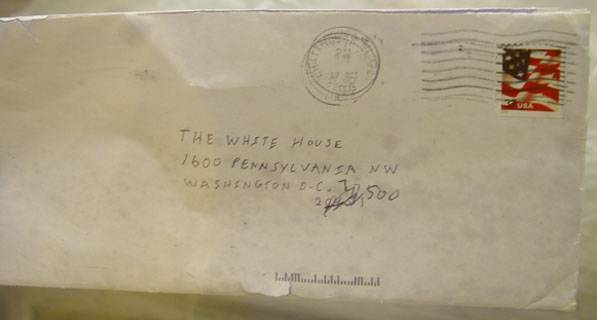 One of the 2003 ricin letters. Photo: FBI
So, in March 1995, the terrorist organization Aum Shinrikyo (banned in the Russian Federation by a court order) carried out an attack on the Tokyo metro. In this attack, a chemical weapon was used - sarin gas. A few days later, during a search in the organization’s office, cultures of anthrax and Ebola were detected. Fortunately, the terrorists did not manage to produce a sufficient number of pathogens and organize an attack.

In the fall of 2001, in the United States, unidentified individuals mailed anthrax spores by mail. As a result of contact with them, 22 people became infected, 5 died. The investigation took several years and was one of the most difficult in stories FBI. Despite all the difficulties, investigators were able to identify a single terrorist.

In 2003 and 2013 The United States again faced a biological threat in letters - this time, ricin was used. Fortunately, the danger was identified in time, and no one was injured by the toxin being sent. The organizers of the 2003 attack have not yet been established. In 2013, they managed to find the culprit, they again turned out to be a lone terrorist.

If a terrorist organization is planning the loudest terrorist attack with the most dire consequences, it is biological weapons that are of greatest interest to it. Various diseases, such as anthrax, plague, smallpox, etc., are distinguished by their high spread rate and danger. Toxins like ricin are also capable of causing maximum damage in the shortest possible time. 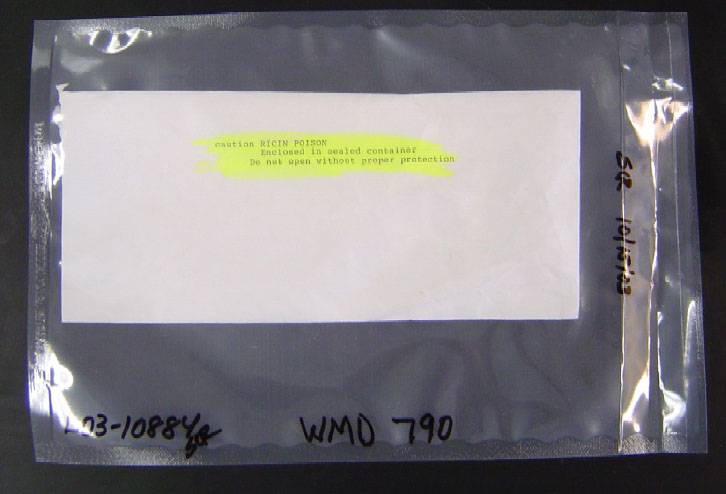 Material evidence in the 2003 case, security measures taken. Photo: FBI
The fight against such attacks is extremely difficult for medical services. According to foreign experts and officials, the current pandemic perfectly demonstrates what the effects of a targeted attack might look like. Now medical institutions are busy with work on the coronavirus, and some of them are doing their best, but no longer have reserves. The appearance of a mass of new victims, including those with especially dangerous infections, can lead to the collapse of the entire system.

However, in the general statistics of terrorist attacks, biological weapons occupy almost the last place. This is primarily due to the complexity of its preparation and use. So, to prepare a bacteriological or viral attack, the initial pathogen is needed, as well as a whole laboratory to grow enough pathogens and prepare “ammunition”. The production of bacterial toxins is also not simple.

In both cases, special safety measures are needed to protect personnel. Also conspiracy is of great importance. The clandestine laboratory can attract the attention of the competent authorities - and stop working long before it is ready for a real attack. 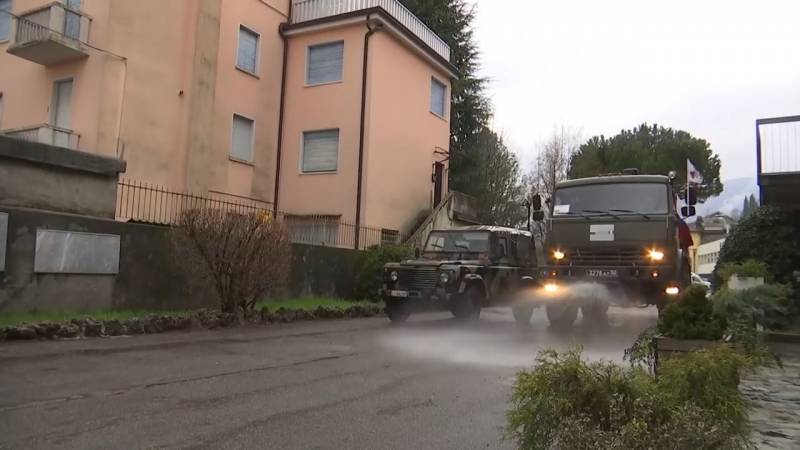 The filling machine of the Russian troops of the Russian Chemical Forces disinfects the streets of the Italian city. Photo: Ministry of Defense of the Russian Federation
Thus, terrorist organizations have the theoretical ability to create and use biological weapons, but in practice they prefer simpler and cheaper methods. As a result, bioterrorism is still a very rare occurrence.

The fight against bioterrorism has no fundamental differences from other counter-terrorism activities. The first frontier of defense is the prevention carried out by special services. The organizations of our country and other states have the necessary methods for tracking and detecting various kinds of extremists, and have also accumulated rich experience in this area. At the same time, the terrorists' need for a biological laboratory to some extent simplifies their search and detection.

If the attack could not be prevented at the preparation stage, the special services will have to investigate and search for those responsible. At the same time, the medical system must ensure the reception and treatment of victims, which may be associated with various difficulties. It is possible to involve RCHBZ units capable of disinfecting or degassing infected areas. 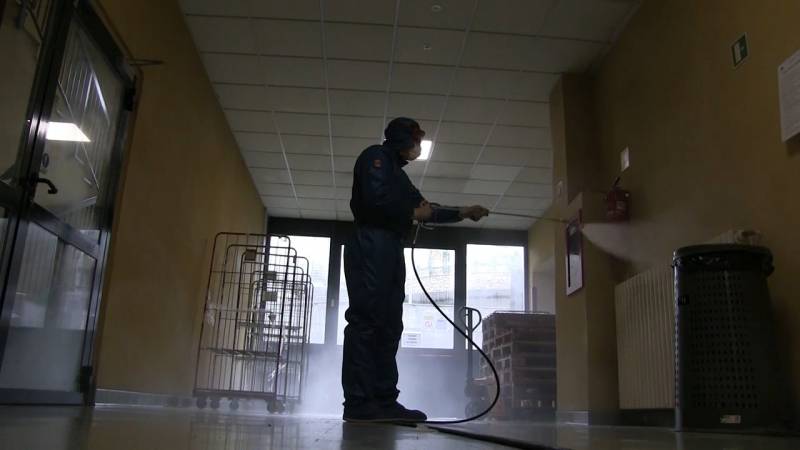 Treatment of rooms infected with coronavirus. Photo: Ministry of Defense of the Russian Federation
Thus, the fight against bioterrorism is a special “alloy” of counter-terrorism, medical and other activities. Depending on various factors and the development of events, various organizations and services with initially different tasks should participate in it.

Of course, there is and remains the risk of terrorist acts using biological weapons or other weapons of mass destruction. Such attacks can have the most serious consequences, and therefore are especially attractive to extremists. However, their organization is associated with a wide variety of problems and difficulties, as a result of which terrorists prefer to blow up and shoot.

However, the potential threat of bioterrorism cannot be denied or underestimated. Such errors can have the most serious and tragic consequences. Fortunately, the special services of developed countries have the necessary competencies and capabilities, which helps prevent both “ordinary” and biological attacks.

Ctrl Enter
Noticed oshЫbku Highlight text and press. Ctrl + Enter
We are
Coronavirus COVID-19: threats, consequences, actionsSituational analysis of the death of the MH17 flight (Malaysian Boeing 777), made on the basis of engineering analysis from 15.08.2014
Military Reviewin Yandex News
Military Reviewin Google News
27 comments
Information
Dear reader, to leave comments on the publication, you must sign in.